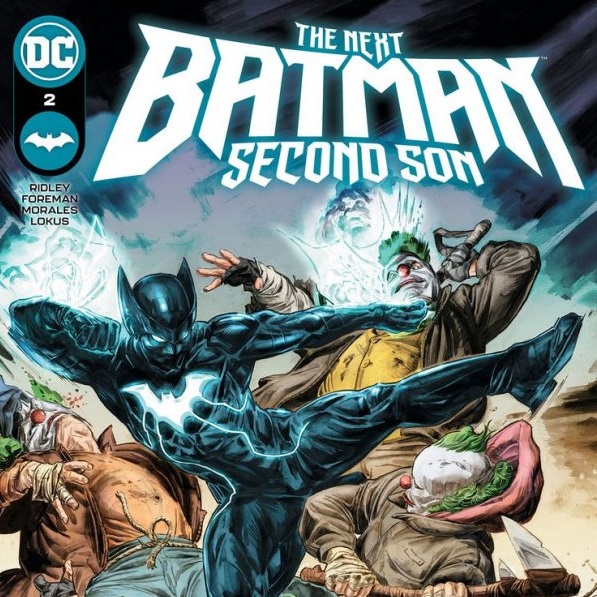 Overview: The Next Batman: Second Son #2 collects chapters #4-6 of the digital-first series, which answers more of the questions arising out of Future State: The Next Batman.

Synopsis (spoilers ahead): The Next Batman: Second Son #2 starts as Tamara Fox lies in a vegetative state, the Fox family listens to her doctor explain what might be going on since she was initially poisoned by Ratcatcher (see Batwing Volume 1). They immediately come up with their own ideas as to what could be behind her relapsing. Luke thinks it’s Jace’s return to Gotham. Tanya thinks it’s the mask problem in the city. Lucius tells the doctor to do whatever it takes to take care of his daughter, no matter the cost. This infuriates Jace, who storms out of the hospital.

At GCPD headquarters, new police commissioner Rene Montoya meets with officers Chubb and Whitaker. Since A-Day, there’s been a serious need to rebuild the department. To make this happen, personnel moves are causing everyone to move up that ladder, including the two partners. Montoya hands them their gold shields, making them GCPD detectives. She warns them however of the changes coming to Gotham under Nakano’s administration, including his stance on masks — friend or foe.

At the Fox residence, Jace gets a call from Vol, who tells him Arkadine has a courier heading to Gotham with a package. Jace finds the courier heavily guarded, including one who seems to know he’s there. Vol tells Jace that he’s unable to hack Arkadine’s systems with his current tech. This gives Jace an idea.

Back at the Fox house, Tiffany argues with Luke over the day’s events with Tam and how the family is handling it. She blames Luke for not doing enough to catch Ratcatcher for what he’s done. Tiff tells Luke to do something, causing him to leave — as Batwing.

The next morning, Jace gets a new job — working for his dad at Foxtech. As they fly in the family chopper, Lucius talks to his wife about Jace’s upcoming deposition. He doesn’t feel he’s prepared. Tanya thinks the entire matter should have been handled a long time ago, but now, people are after the family’s new wealth. As this is going on, Tiffany is hanging out with Jace, wondering about his change of heart with working for the family. As they talk, Tiff receives a notification. Someone is posting pictures of Tam in the hospital on social media. Jace promises her that things will work out, even for the social media influencer posting pictures of their sister.

At the GCPD, Commissioner Montoya addresses the new slate of detectives about Mayor Nakano’s orders on masks. She is clear. Masks are to be taken in, no matter what side of the line they operate on. Whitaker is unsure about the new orders considering how the masked vigilantes have protected Gotham in the past.

That evening, with the help of Vol, Jace locates the social influencer Ubetz, the one who posted pictures from Tam’s hospital room. After saving him from some bouncers, Jace cancels Ubetz, ordering him to stay away from social media. Under the streets of Gotham in an area known only as the Underneath, Batwing locates Ratcatcher. Batwing is looking for a cure to the poison given to Tamara. Ratcatcher has no interest in helping Batwing. Instead, he building his army to take the streets for themselves. This army is well-armed. But they’re also children.

As Ratcatcher’s army of children surrounds Batwing, Batwing brings up a force field around him. It initially is able to protect him but eventually fails. The kids pounce on him. Calls come into the GCPD of shots fired, and the commissioner sends in Chubb and Whitaker to check it out. She reiterates Nakano’s orders — apprehend all masks, including the good ones.

At the hospital, Tanya is discussing the deposition with Jace, urging him to not be weak. Jace is hearing it as he focuses his concern on Tam. But his mother promises him that she and his father will be there for Tamara just like they will be there for him.

The police arrive as Ratcatcher’s army of children continues their attack on Batwing. Chubb gives the order to open fire and an officer shoots Ratcatcher. Batwing warns the cops about the children, and he takes out a support pylon to protect them from flying bullets. As he escapes outside, he’s stopped by Detective Whitaker, who lets him go. This allows Luke to make his way to the hospital, where he finds Tiff at Tam’s bedside. He tells her he wasn’t able to get to Ratcatcher to get the cure to Tam’s condition. Furious, she runs off into the arms of Jace.

Analysis: Whoa, another great issue of Ridley’s prequel to Future State: The Next Batman. If I didn’t mention in my review of the first issue, I have been following the story digitally as the chapters are released. Ridley’s story continues to be great in The Next Batman: Second Son #2. As each chapter is released more and more questions from The Next Batman are being answered. Tam’s condition stems from the events of the New 52. We’re also given more insight into the individual attitudes of the Fox family in the Future State series. Everything with their pain and hate centers on Tam and her condition. Whether it’s Tanya’s hate of the masks, Luke’s discontent with his brother, or Lucius being oblivious to it all and focusing on Foxtech, it all revolves around Tamara. In this current state, I’m not a fan of the Fox family, and I am quite ok with the way Ridley has written them. Layer by layer, he has pulled back the curtains to show a family who is going through as many problems as any other. There’s the added caveat of billions of dollars being added to the situation. As a wise man once said, “mo’ money, mo’ problems.”

Once again, Tiffany is my hero. I greatly appreciate the voice that Ridley is giving the youngest of the Fox children. In both her conversation with Luke and with Jace, she proves that age is nothing but a number, and she is more hip to everything going on than her parents and older siblings seems to be. It’s no wonder that she makes a perfect Robin to Jace’s Batman in Ridley’s Batman: Black and White story. The art is pretty good. As stated in my previous review, it is a little simplistic, but it works. It is nice that there is only one penciller in this issue.

There’s not much more new in my analysis of The Next Batman: Second Son #2 that I didn’t state in my review of the first issue Questions from Future State are being answered, and they’re being answered in a dramatic way. And while these questions are slowly getting answered each issue, new ones pop up (you have to come back for my review of Batman: The Next Batman next month). As with the rest of the Bat-books, Second Son fits nicely into the overall Batman universe, giving the reader a three-hundred and sixty-degree story as they go from book to book. This is what I have wanted for the Bat-books since Rebirth, and I am happy we are finally getting it. It allows for a great well-rounded story.

The Next Batman: Second Son #2

Whatever issues that I have had with Future State: The Next Batman are slowly being answered. John Ridley has put together a great story that slowly shows Tim's/Jace's transition to the mantle. In doing so, he fills in plenty of the holes left by Future State. This has made the series much more enjoyable.