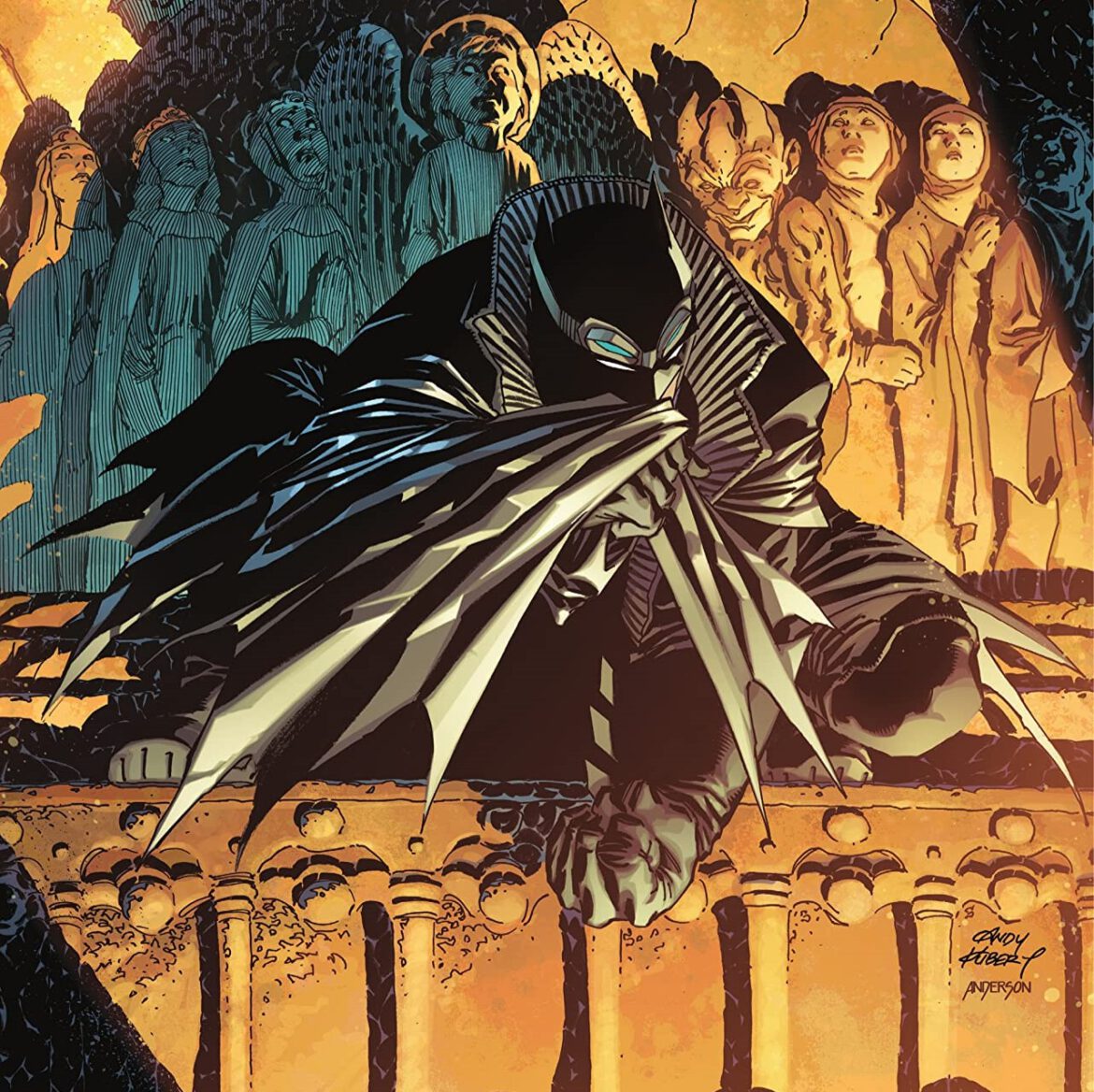 Overview: In Batman: The Detective #2, Bruce Wayne continues his search to find the ghosts that haunt Lanchester.

Synopsis (spoilers ahead): A skyline in London shows Batman grappling a hook around a character named Matthew Sprague. Batman proceeds to interrogate Matthew about his occupation as he dangles off Big Ben. Matthew bluffs, saying that he only knew she wore a mask, despite previously admitting he did not work for anyone. He falls off the clock and tumbles to the ground, running as fast as possible. Squire and Batman chase him in the Batmobile quickly. Batman reviews the new Squire’s situation, just before they check deep underground. She reveals that she had been staying with a foster family.

We then cut to France, where a white-clad group of people then take their turn to interrogate Matthew Sprague. As the leader of the group scans him, she notices that there is a tracker inside of him. She demands that all traces of it be destroyed. At the same time, Matthew mistakenly admits that Batman “saved him,” as his head is blown off by a gunshot.

Bruce then hitches a train ride on the Eurostar to Paris to investigate the white-clad clan as the rain falls hard. Henri Ducard meets up with Bruce, strangling him and knocking him away from his drink. Ducard then tells Bruce that he had been following him, smugly grinning while he drinks. When Batman heads to Oberkampf, he stumbles across a decapitated body. The next panel turns to Ducard as he smokes outside, while the clan sneakily attacks him and throws Ducard off the ledge. The issue ends with Batman holding a seemingly dead body of Ducard.

Analysis: Tom Taylor writes some witty dialogue in Batman: The Detective #2 between Batman and everyone else he encounters. It is refreshing, even if this is supposed to be an older version of Bruce Wayne. Upon his interrogation of Matthew Sprague, who is ineffectively being held by a cable, Batman remarks that the instrument can only hold two hundred pounds. However, Sprague remarks that he does not fall under the American Imperial system of weights and that he is a native of Australia. The vertical page adds weight toward the interrogation. This interaction displays comedy done well. Taylor does a great job keeping the reader off-track while producing an interesting detective narrative.

Andy Kubert continues his stellar work on the series penciling with Sandra Hope, who adds even more depth by her inks. While the expressions are definitely done well, it is Kubert’s ability to showcase how deep Batman’s investigative gadgetry is. That moment you step inside the Batmobile, you just cannot help but be in awe and wonder of how functional it is. The gadgets, the cave, the costumes; everything that Kubert pencils in this book has a flashy aesthetic to it. It enhances the story and shows just how freaking cool Batman is.

Brad Anderson highlights the story with beautiful detail. When was the last time a hazy sky with purples and oranges was shown in a comic? The scenery is beautiful, and the tone is well-played in each panel he colors.

Tom Taylor continues a strong path to flesh out a ghostly world, as he brings in fun to a grim-dark England, while keeping readers on their toes.