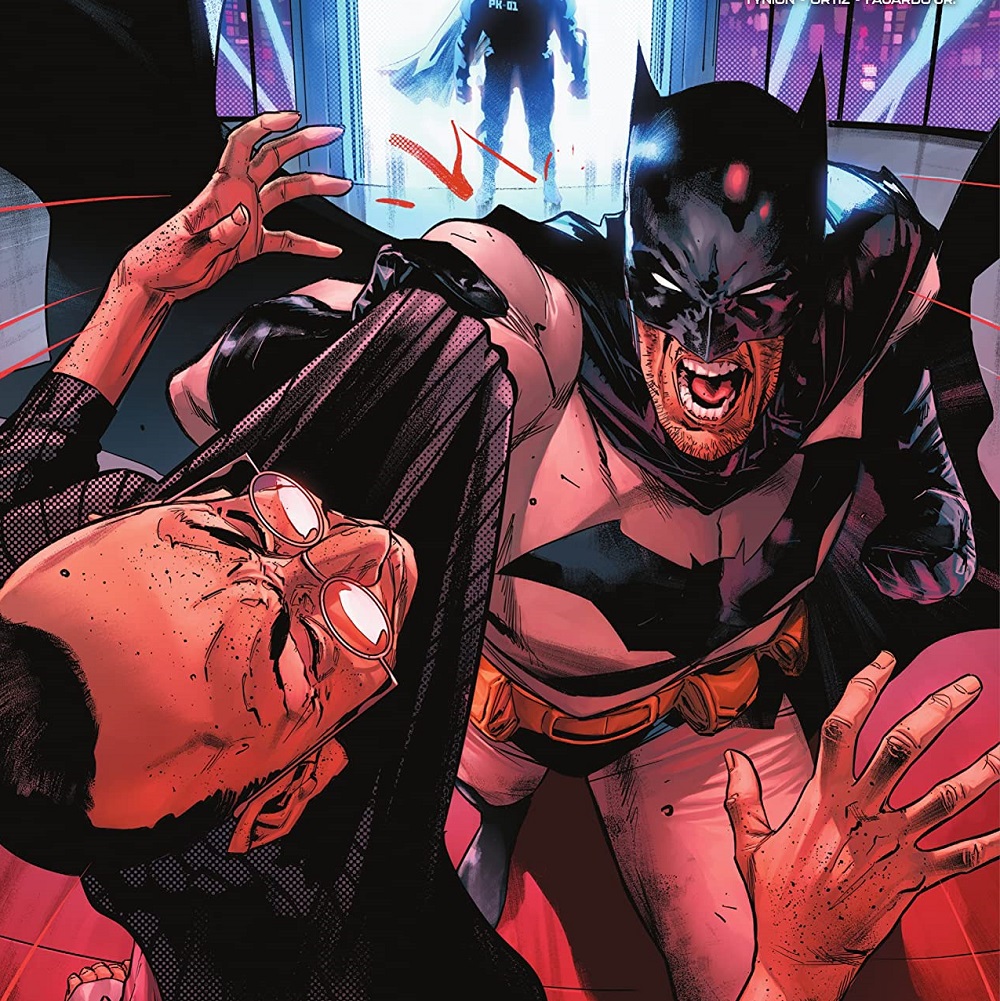 Overview: In Batman #109, Batman infiltrates Saint Industries, only to encounter the newly constructed Peacekeeper-01. Meanwhile, Harley Quinn is approached by the Gardener, who tells her that Poison Ivy is alive.

Synopsis: Batman #109 begins in the near future, as Batman struggles to fight back against Scarecrow’s fear toxin. He breaks himself free of his restraints and flees, battling against what’s real and what isn’t.

In the present, Bruce Wayne returns to his home in Fort Graye after talking with Miracle Molly and the Unsanity Collective last issue. He lets Oracle know that he’s returned, and she updates him on events in Gotham that took place while he was gone.

Two more scarecrows have been spotted in Gotham. One was in the lobby of GCPD Central, and the other was found at the altar of the old Gotham Cathedral. Oracle tells Batman that the media is in a frenzy. She also tells him that she thinks she spotted Scarecrow at Mayor Christopher Nakano’s speech the other day.

Batman asks Oracle to contact Ghost-Maker for backup in apprehending Scarecrow. He also asks her to send him schematics on Saint Industries. Batman is going to intercept Simon Saint and get Scarecrow’s location from the CEO.

Meanwhile, at Ghost-Maker’s secret rooftop hideout in Gotham City, Ghost-Maker shows off his own personal “cave” to Harley Quinn. He boasts about how he’s tried to make it more advanced than Batman’s classic Batcave, even switching out a Spinosaurus for Batman’s T-Rex.

Ghost-Maker offers Harley a drink, and Harley asks Ghost-Maker if he wants to kill her or sleep with her. Ghost-Maker confesses that he’s fascinated with Harley, that her story of a therapist to villain to vigilante intrigues him. Ghost-Maker tells Harley that the two can relate, and then he reveals that he was diagnosed as a psychopath a long time ago. He just chose to wield his psychopathy for good instead of enjoying life unbound by ethics and morals.

The two duel with swords, and Ghost-Maker, after revealing the number of people who know the real him, asks Harley how many people know who she truly is. Harley mentions Joker, then talks about Poison Ivy.

Just then, the Gardener (AKA Bella Garten) arrives with her army of plant-based hounds. The Gardener wanted to talk to Harley where Ivy couldn’t overhear, as Ivy’s roots are everywhere in Gotham. The Gardener reveals that Ivy has been growing beneath the city, and she could collapse it at any moment if she wanted. Bella gives Harley a plant that serves as a communication device. Harley is to use it to contact the Gardener when she’s alone, so the two could talk. Bella tells Harley that Ivy needs her and that, all this time, Ivy has always been keeping an eye on Harley wherever plants could take root.

Then, Oracle breaks through Ghost-Maker’s intercom and summons Ghost-Maker into action.

At Saint Industries, Simon Saint is discussing plans with Mayor Nakano’s assistant. He mentions the recent fervor from Mr. Worth over the abduction of his daughter, which is featured in recent Detective Comics issues.

Saint gets an alert that someone is here, and he cuts his meeting short. After the assistant leaves, Batman arrives and takes down Saint’s personal assistant. Batman demands to know where Scarecrow is, but Saint pretends not to have any association with Scarecrow. He diverts to talking about how Batman has failed to stop the super criminals that came after the mob in Gotham City, which is where his Magistrate Program will pick up and improve conditions.

Saint introduces the newly designed Peacekeeper-01, piloted by Sean Mahoney from the A-Day attack in Infinite Frontier #0. Batman and Peacekeeper-01 fight, while Saint divulges that his peacekeepers will clean up the city and stop those anarchists, the Unsanity Collective. He muses over what they could do to stir up fear in the city, suggesting that the Unsanity Collective could blow up City Hall. Just then, an explosion rocks Gotham.

Batman continues his battle against Peacekeeper-01, who is proving to be more than an adequate opponent.

Analysis: By the conclusion of Batman #109, the setup and exposition that have been layered in the past few issues are finally in motion. Writer James Tynion IV and artist Jorge Jimenez spent three issues slowly filling a powderkeg since the start of this “The Cowardly Lot” arc, and readers are rewarded with quite the explosive payoff.

The citizens of Gotham City are paralyzed with fear. The Magistrate Program has been pretty much signed, sealed, and delivered. The Unsanity Collective has been scapegoated and framed for blowing up City Hall. Batman, meanwhile, has been struggling to keep up as Scarecrow’s plan pushes forward.

Buried beneath the happenings of greater Gotham, Tynion and Jimenez are low-boiling what appears to be a romance between Harley Quinn and Ghost-Maker. Ghost-Maker has confessed respect for Harley, and Harley, meanwhile, can’t decipher whether or not Ghost-Maker wants to sleep with her. This seems to be setting up a love triangle, as the Gardener arrives to tell Harley that Poison Ivy has been growing beneath Gotham the entire time.

There is a lot of story crammed into the twenty-something pages of Batman #109, but it’s paced quickly and efficiently. Jimenez does a terrific job of highlighting the most important moments. His reveal of Ivy comes across as deifying and incredible. Paired with Tomeu Morey’s coloring, it’s a stunning moment of breathtaking beauty.

Alternatively, the reveal of Peacekeeper-01 is equally amazing and threatening. The way it takes place, inside Saint Industries immediately after Batman confronts Simon Saint, makes it feel like it takes cues from the film Robocop where a very similar sequence occurs between the titular film character and OCP executive Dick Jones.

The fight between Peacekeeper-01 and Batman is cool, especially with Batman trying to navigate Saint Industries and subvert the peacekeeper’s sensors. At least in the earlier stages of the fight, Batman feels tactical. He’s trying to dart around and search for ways to efficiently take down this new opponent.

One of the best images of Batman #109, however, is that opening page. While narration conveys the mental struggle Batman is enduring under Scarecrow’s fear toxin, with excellent lettering from Clayton Cowles, Jimenez and Morey provide stellar panels that feel nightmarish, bleak, and almost hopeless. It really sets the tone for the destruction that’s about to happen in this issue. Also, it’s worth noting that in the first panel, Batman is wrapped up in black bandages. As he breaks free and flees, these bandages form his suit. It’s a nice touch!

Synopsis: The backup in Batman #109 has Ghost-Maker fight his way through a nest of cyber cobras on Devil Skull Island. While the villains gathered by Madame Midas watch, Brainstorm decides to leave. When asked why he’s leaving, Brainstorm reveals his origin, as well as his capture at the hands of Ghost-Maker.

Analysis: Brainstorm’s origin story is fun. If the framework of these backups is to provide an origin story for each of the villains in the next few issues, it’s an entertaining way to learn new characters and indulge in different, non-Batman types of stories from James Tynion IV and Ricardo Lopez Ortiz. Plus, by breaking them up this way, we learn more and more about Ghost-Maker’s history as a crime fighter, in quick, bite-sized segments.

It’s both a great world-building exercise for DC and a way to explain what Ghost-Maker has been doing this entire time since he and Bruce Wayne parted ways back when they were both training to be vigilantes. The one interesting difference between the two, however, is that whereas Batman is dark and brooding, Ghost-Maker’s world is completely different. It’s light, action-filled, and excessive. There’s no grounding to Ghost-Maker, as it feels like the sky isn’t the limit, it’s the foundation.

Batman #109 finally turns this plot from a simmer to a boil with an explosive turn of events. What was an intriguing plot has now become all the more thrilling.