Review: The Next Batman: Second Son #3 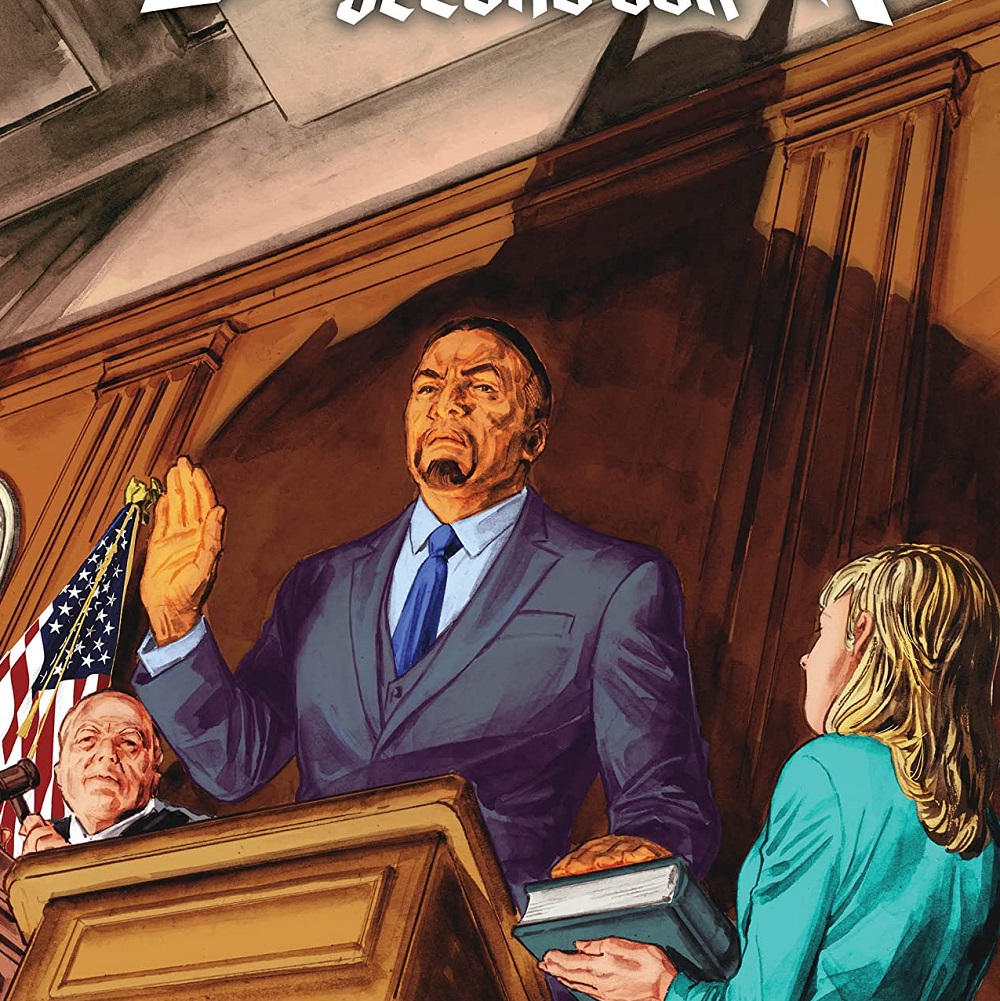 Overview: The Next Batman: Second Son #3 collects chapters #7-9 of the digital-first series and looks at the event that would change Tim Fox’s life forever and set him on a new path in life.

Synopsis (spoilers ahead): The Next Batman: Second Son #3 begins with Jace watching as the bodyguard hired by Arkadine to protect the courier, Eabha O’Roark, disposes of three goons hired by Vol to test her, with ease. Vol warns Jace of what can happen to him as he prepares to go after whatever Arkadine’s courier is carrying. Jace brushes him off as he tells him a good friend says hi.

At GCPD, Tanya Fox presents Renee Montoya with a court order preventing the department from releasing any information pertaining to the case of Enrique Acevedo. The police commissioner scoffs at the lawyer as she walks away.

At the Fox home, Luke mopes over the events at the hospital with himself, Jace, and Tiff. His father joins him. Luke argues over Jace coming home and how his parents always come to Jace’s defense despite his flaws and actions. Lucius pushes back on Luke, causing Luke great concern over his father’s mental well-being, especially after his attack at the hands of Punchline during Joker War. Lucius pushes back at this idea, telling his son to fix his own problems as Lucius is perfectly fine.

At GCPD, Detectives Chubb and Whitaker discuss the recent events regarding the raid of Ratcatcher’s hideout. Chubb is not comfortable with Whitaker’s plea that she omits from her report that he let Batwing go despite Montoya’s order to bring in all masks, good or bad. Jace and Tanya sit and wait for Jace’s deposition. She hands Jace a prepared statement for him to read. They argue over the contents before they are called into a boardroom. The deposition is about to begin, and Jace is ready to make his own statement.

Jace begins his statement by applauding his parents for providing for him and his family despite the fact that they, particularly Lucius, may not have always been around. As the oldest of the Fox children, Tim Fox lavished in his family’s success and money. The sixteen-year-old got whatever he wanted, including cars that he loved showing off. He also enjoyed hanging out with his sister Tamara. There was a huge party for Tim’s seventeenth birthday. There, the young Fox meets a young lady who he wants to get to know better. The young woman doesn’t fall for Tim’s game, leaving him alone in the middle of the dance floor. Upset, Tim leaves the party. As he drives, he attempts to call another young lady. The distraction, unfortunately, is fatal as Tim’s vehicle runs into someone crossing the street. Tim gets out to see the man begging for help. Instead of helping, he jumps back into his vehicle and takes off, heading to the only person he feels he can go to – his father. Tanya, feeling enough damage has been done, abruptly ends the deposition, forcing Jace, who is clearly upset, to leave with her. She tells him that she is doing is everything to protect him and the family from being extorted by the Acevedo family despite Jace admitting to hitting Enrique Acevedo with the SUV, killing him.

At GCPD, Commissioner Montoya stops and questions Detective Chubb about the raid on Ratcatcher’s hideout. She knows that Chubb’s partner, Whitaker, is lying about the events in which he let Batwing escape despite Montoya’s orders to apprehend any mask they encounter, good or bad. She warns the new detective to not let her loyalty to her partner put her life at risk.

At home, Jace thinks back on the day’s event with the deposition and his encounter with his mother afterward. This causes him to think back to the day he informed Lucius of what he had done. Lucius gathers a team to smear the victim so that there’s no focus on what Tim had done in hitting Acevedo. Tim is upset about what he’s done. He feels worse about what his father does to cover it up. Lucius and Tanya enroll Tim in a boarding school, where he struggles to find himself. Instead of beating up on himself with guilt, he let his teacher do so by refusing to defend himself and fight back. After chatting with a few friends, Tim rethinks things. The next day as Tim’s instructor arrives for the day, he finds Tim waiting on him.

Analysis: The Next Batman: Second Son #3 is another good issue from John Ridley as we get more holes from Future State filled in on who Tim Fox is, was, and the event that led him down the path in life he eventually chose before picking up the mantle as the Next Batman. That event, which we get a hint of in Future State as a flashback before Tim avoided hitting someone as he was fleeing the Magistrate, is that the oldest Fox son hit someone as a teenager, killing him. Readers see the events leading up to the man’s death and in doing so, get a glimpse of who the young Tim Fox was – a young, flamboyant man, who had no problems flaunting the money his parents made. Ridley’s story of the events leading to the death of Enrique Acevedo not only highlights the point in which Tim changes who he is, but it also highlights something not seen before. More than what readers have seen either in the page of Future State or in the earlier issues of this series, what Ridley has done with The Next Batman: Second Son #3 is pull back the curtain and show a Fox family one may not have expected to see. While initially, one might find concern with Lucius’ well-being as he snapped at Luke (which is found in chapter #9), pages later (or in chapter #10), we see that Lucius has been quite ruthless in the face of his kids being in danger. The same can be said of Tanya, who would go as far as filing court orders just to be able to give Jace a false statement (aka a lie) to read in a deposition. Ridley portrays both parents quite ruthlessly. To Ridley’s credit, it is something different and unexpected for the typically calm Lucius Fox.

Ridley continues to fill in holes from Future State in The Next Batman: Second Son #3 as well, and it is interesting that the answer to these questions occurs in the distant past instead of the recent. Tim’s transition as a person began when he realized who his father was while his mother played the coddler/caretaker as a child only to see the roles almost reverse as he becomes an adult. I’m not liking either parent at this point, but that’s okay. Their voices help move the story along in an enjoyable way. We finally get introduced to the mysterious Vol, who turns out to be a boarding school classmate. There won’t be time in the last issue to see how Tim and Vol’s relationship turned from classmates to partners, but at least readers know who he is and why Jace trusts him. We are also introduced to someone new in Jace’s life who might have had more of an influence on Tim than Vol. With the new series being announced, it would be interesting to see if she plays a role as it seems Jace is avoiding her for some reason.

As with previous issues, the art continues to be the worst thing about this series. It just feels too rushed and the colors don’t make it any better. This is a problem with the digital series. The art is just not good and there’s no other way to say it. Fortunately, the story has been good enough, particularly with this issue, to make me overlook it when I would typically not.

The Next Batman: Second Son #3

Despite the weak artwork, Second Son continues to be a strong book in continuing Jace Fox's ascension to the mantle of the next Batman. Hopefully, Ridley can bring a bang to the final issue. Unfortunately, considering we will be getting another series this year from him, it's more than likely things will end on a whimper.