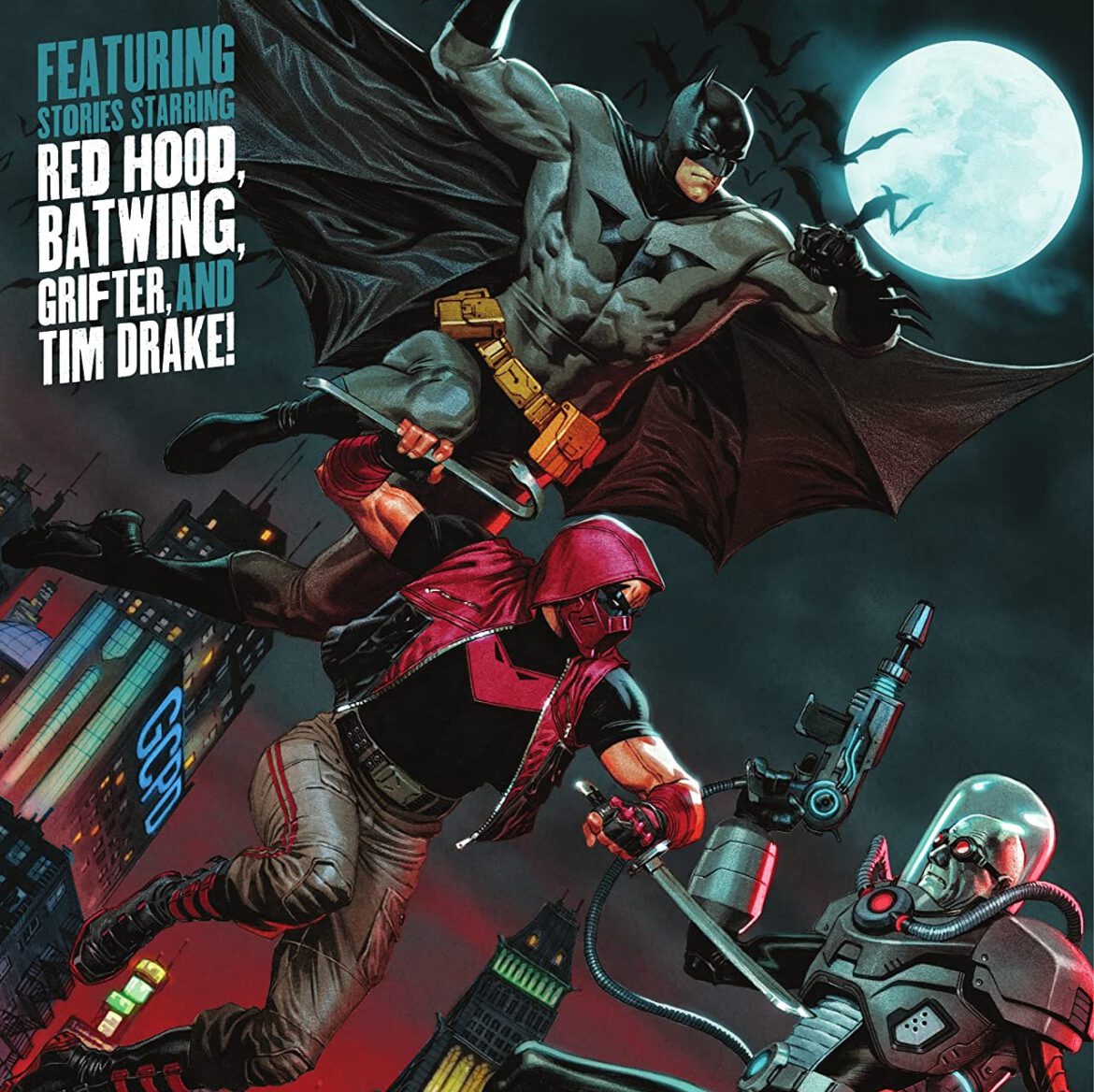 Synopsis: The first story in Batman: Urban Legends #4 sees Jason Todd remembering a past tangle with Joker in which Batman instructed Jason to stay put and watch a warehouse – nothing more. Jason wonders how Batman, of all people, did not realize that he would not listen. Flash forward, and Red Hood struggles with Mr. Freeze. He falls through the damaged floor and tries to exit the building, but Mr. Freeze has iced the building shut. The villain is on cheerdrops and assures Red Hood that all will be fine as he aims his freeze gun.

Red Hood flashes back again to the warehouse scene where he ignores Batman and begins to search the building. He stumbles right into the Joker and his henchman, and the present inner monologue reflects that he could never be Robin to Batman because neither of them trusted the other. Flash forward, and Red Hood asks Oracle for “help” and “Batman” as Mr. Freeze blasts him with the freeze gun. Oracle loses contact with Red Hood and immediately comms Batman for assistance, informing him of the threat from Mr. Freeze. She explains that Red Hood specifically asked for Batman; he immediately understands and thunders off in the Batmobile.

Batman flashes back to the destruction of the warehouse, after which he found Red Hood still alive, as Batman intends him to be in the present. Flash forward, and Batman locates the truck transporting Red Hood and Mr. Freeze but is forced to eject from the Batmobile after Freeze ices the vehicle. An explosion sends the frozen statue of Red Hood out of the truck, but Batman is forced to jump off of the truck to deal with the henchmen about to dispose of the incapacitated Red Hood. Just as he smiles down at Red Hood, he is blasted from behind by Mr. Freeze.

Analysis: “Cheer” remains a good story with Batman: Urban Legends #4, but it is starting to feel a bit long in the tooth. As I’ve noted since the beginning of the arc, there is little that is original in the tension and emotional interplay between Red Hood and Batman. That is alright, as there is nothing wrong with covering familiar themes in interesting and well-told ways. After four installments, the lack of originality is starting to grate a bit, and it feels as if the narrative is losing verve. The notion of Mr. Freeze on cheerdrops is an interesting one, and the drama of Red Hood directly asking for Batman’s help is captivating if a bit heavy-handed in execution.

The artwork remains excellent, and I’m especially taken with some of the panels of Batman in the cockpit of the Batmobile. His emotions and facial expressions are rendered beautifully and even under the cowl you can read what he is feeling right on his face. This remains a good story and the jewel of the anthology, although it does seem like it might have been better suited to a four or five-part arc. I’m still interested to see where this goes and what Mr. Freeze has in store for the heroes.

Synopsis: Batwing is on the hunt for Riddler. He descends into the sewer, and a hologram of Riddler’s head appears to taunt him. The riddle begins, and Batwing works to solve it while he is being attacked by Riddler’s thugs. Batwing solves it in time, but Riddler opens one more crate to reveal Killer Croc, who smashes Batwing. Croc is angry that neither Riddler nor Batwing will leave him alone even after Suicide Squad, and he comes at Batwing. Batwing unsuccessfully tries to calm Croc and then knocks him out with a Superman Punch. When Croc comes to, he makes a deal with Batwing: If he shows Batwing where Riddler is hiding, Batwing will give him a head start in the sewer. Croc holds up his end of the deal, and Batwing decides to take Riddler in but lets Croc go.

Analysis: This is not the strongest story in Batman: Urban Legends #4. MMA fans will likely appreciate the reference to the famous Superman Punch, but it’s not at all clear what the story is doing or what the objective is. Batwing solves a riddle, fights Croc, and then turns Croc on Riddler. That is it. It is interesting to see Killer Croc turning up all over the Batman Universe right now, playing a part in Harley Quinn, Suicide Squad, and here in Urban Legends. I also appreciated the rendering of Riddler, with obvious allusions to his representation in Batman: The Animated Series, which is near and dear to my heart.

Synopsis: Oracle is chatting with Tim Drake over the comm, and in response to her inquiry says that she can call him “Robin” at least while Damian is gone. He is investigating the seemingly random kidnapping of Gotham teenagers. Oracle is indicating that the Bat-Computer systems are running slower since an update, which seems unusual for the Drake-designed apparatus. While questioning two area teens, Robin offers tech support to Oracle that apparently resolves the problem. He also learns that a disappeared teenager was waiting for “the Chaos Monster.” He then instructs Oracle to stop speaking to his “ex” about him, and Oracle admits that she is concerned about him, regardless of whether he wants to go to university.

Robin drops offline, changes into some of Dick’s old clothes, and meets up with Bernard Dowd for a burger. Just as they get deep into conversation, The Chaos Monster himself drops in and slaughters a waiter. Tim leaps up to take him on, but the villain gets the better of Tim and puts him to sleep with chloroform powder. Tim wakes up to a police officer informing him that Bernard has been kidnapped.

Analysis: It is wonderful to finally get some updates and time with my favorite Robin, Tim Drake. This is not the strongest vehicle for his character and talents, but it is fascinating to see how quickly he fixes a technical problem that even Oracle cannot easily solve. Oracle’s speech regarding her concern for Tim is welcome, as it no doubt echoes a lot of the anxieties and questions that fans have had since we left Tim in continuity. The rest of the story is not especially exciting, although the boyish anime style of the art is strangely effective for Tim (generally I do not prefer anime-style art in the Batman Universe, but it works here, perhaps because of Tim’s youth).

Synopsis: The final story in Batman: Urban Legends #4 starts with a flashback, Cole Cash is informing an unseen figure in an office chair that Leviathan contracted with him to kill Lucius Fox. At the present, Grifter is being pummeled by Deathstroke. He pauses to take a call from Lucius. After they converse, he hangs up and they continue to fight, but it becomes apparent they are staging the fight.

At Wayne Towers, Chance informs Lucius that Cole took the bait and that she knows he stole something off of her laptop.

Inside a building into which Deathstroke has thrown Cole, they cease fighting and roll a giant cylinder in front of the door. They are waiting for Batman, apparently. After a while, something flies straight into the tank, which then seals shut. Grifter informs the figure in the tank that he needs Batman out of the way for the evening, but that he’ll be back to let him out in the morning. A fist punches straight through the titanium wall, and Superman emerges. Deathstroke flees immediately.

Grifter hijacks a motorcycle and flees from a pursuing Superman; he then tries to teleport into Wayne Towers but the shielding prevents it. Several thugs break into Wayne Towers looking for Lucius, but Bruce intervenes. He cannot get out of the building, where, on the terrace, Leviathan thugs are about to execute Chance and Lucius. The Zealot appears and saves them, then tells them she did so at Grifter’s request.

Superman is about to grab Grifter, but the teleport system finally comes back online and he vanishes. Superman asks Batman to work together, but Batman declines and says he can handle Grifter alone.

Analysis: This arc remains confusing, and I am by now completely convinced that Grifter is not a character that can sustain an independent narrative. The writer perhaps ironically reinforces this point when Deathstroke, presumably introduced to liven things up a bit, himself decides to exit stage left. Alas, the readers are not so lucky, although the notion of Superman pummeling Grifter is cheerful enough of a prospect to propel the reader through the end of the chapter.

Batman: Urban Legends in general feels like it might have been better suited to a three or four-issue slate than the six for which it is designated. Some of the editorial choices seem a bit peculiar, such as the notion that Grifter is a weighty enough character to merit almost one hundred pages when all is said and done. Even the strongest story, “Cheer,” is beginning to lose some steam. There remains enough in here to justify the read, and it is exciting to have quality time with Tim again (Spoiler must be jealous, haha).