Review: Legends of the Dark Knight #2 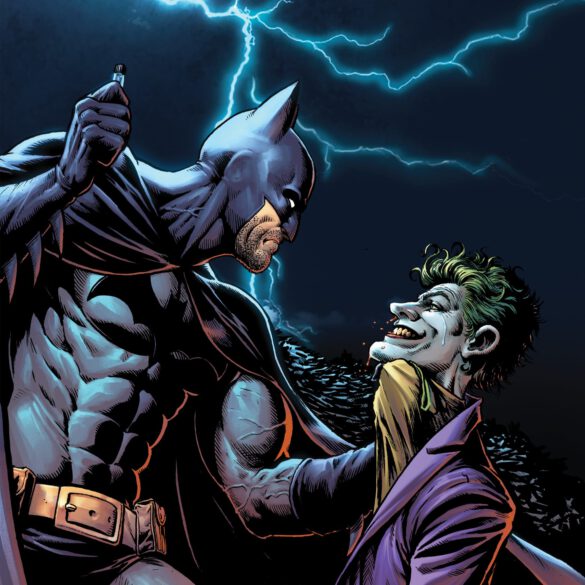 Overview: In Legends of the Dark Knight #2, Batman and the Joker survive the copter crash, but Batman faces a new threat in Quiz.

Synopsis (spoilers ahead): As Legends of the Dark Knight #2 begins, Batman surfaces from Gotham Harbor and climbs onto a garbage barge picking up where the last issue left off.  He immediately regurgitates and pulls something or someone else up.  Batman rescued the Joker, all life matters just as Thomas Wayne has taught him.  He starts chest compressions and mouth to mouth, Joker revives and vomits on himself.  Now they face a new problem, they are miles from shore and there is the risk of hypothermia.  That is not all, the toxins in Batman’s system start to take effect.  He reaches for the vial containing the last dose of antidote he has.  He gave the rest to the swat team.  Joker admits to feeling cold while Batman takes a drop of the anti-toxin.  Joker notices that Batman has the medicine and he wants some.  Batman took a half dose and he starts to feel the effects.  Joker however will die long before the Coast Guard can arrive.  He considers allowing Joker to just die from his own scheme.   Batman grabs Joker and pours the remainder of the anti-toxin into his mouth, saving the life of Joker.

Batman launches a flare in the sky with the hopes that Gordon will see the signal.   While he waits, he has to listen to Joker’s prattle.  First, he chides Batman saying that he knows the Dark Knight would not let him die.  Then he complains about Batman’s moodiness and laments about the missing Robin.  Batman soon gets irritated with the clown.  Joker continues and Batman has had enough and punches the clown out, finally silent.

The scene shifts to the future, Gordon and his men are on the roof of police headquarters with the signal lit up, but no Batman.  Back to the flashback, Gordon reaches Batman and they load Joker onto an Arkham Asylum ambulance.  Gordon tells his friend that he needs medical attention, Batman refuses.  Gordon gives the vigilante vials of what I surmise is more anti-toxin, which Batman downs.  Now Gordon has another issue.  The police received a letter thinking it is from the Riddler.  It is a green envelope addressed to Batman with a question mark on it.

The letter is a crude riddle but it appears to be different from what the Riddler usually sends.  This is rushed and is not quite his style.  Gordon tells him that he should rest but Batman gets in his car to find the Riddler.   From the clue, Batman deduces that the Riddler is at the old Paradox studios.  Paradox was a crooked game show that was a front for money laundering.  Batman remembers who and what the Riddler has done in his career.  Now the studio is abandoned and severely damaged after the quake.  Batman soon learns that he is not alone, a bright light flashes on and spotlights start to drop from the ceiling.  Suddenly a trap door in the floor opens and Batman falls in.

Batman wakes up and finds himself in an electrified cage.   He hears laughter and demands that Riddler show himself.  Soon he understands that he is not dealing with the Riddler but a girl dressed as the Riddler.  She calls herself Quiz and asks the Dark Knight how far he will go to save someone he loves.

Analysis: Legends of the Dark Knight #2 has a fascinating story.  Batman is characterized as I would expect.  A brooding dark man who has a code.  He may consider allowing Joker to die but he will not allow it in the end.  Even he does think that he could do more good by allowing Joker to die, think of the lives that would have been saved.  That is not Batman’s way in the end.

The new villain is interesting even though we really only get a glimpse of her at the end of this issue.  Quiz appears to be a knockoff of the Riddler in her look and operation.  She was able to capture Batman though.

The art is great.  The art really makes the action look like it is happening at night with the shadows and coloration.  Given the vomit, this is a realistic style that has its good and bad points.  Personally, I might have liked a different style here since it is called “Legends”. Maybe a more surreal style would suit this story.  Now it just looks like that it is continuity, there really is nothing story or art-wise to place this story elsewhere.

Legends of the Dark Knight #2

This is a fun story and highlights the character and mannerisms of Batman very well.