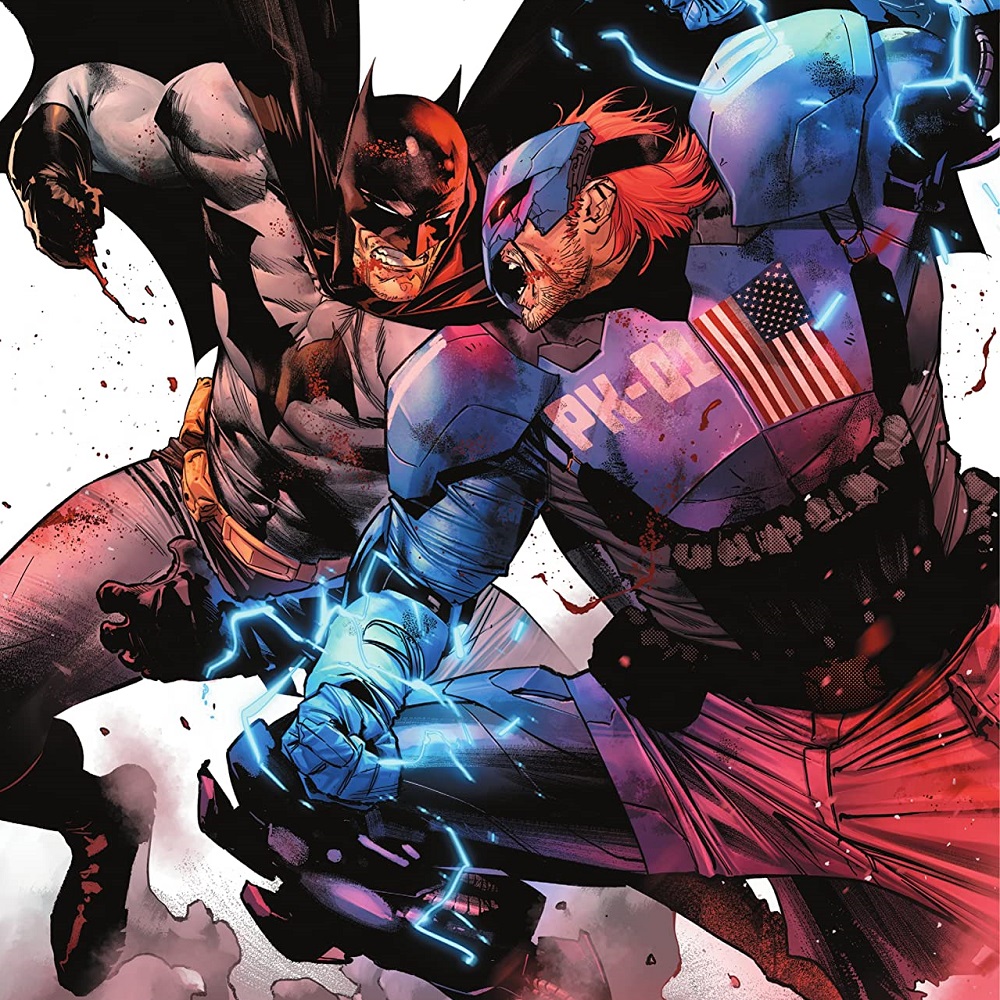 Overview: In Batman #110, Mayor Nakano implements the Magistrate, and Batman barely escapes from his first battle with Peacekeeper-01.

Synopsis: Batman #110 begins in the near future, as Batman runs down a hallway and bursts out into an open field. He’s fighting off fear toxin, reminding himself that none of this is real. As Batman grapples with the toxin, Scarecrow speaks to him. Scarecrow tells Batman that Gotham City is changing, that the “fear state is nearly upon us.”

After an explosion destroys part of City Hall, Simon Saint is on a call with Mayor Nakano, urging the mayor to allow Saint to deploy his Magistrate peacekeepers. Meanwhile, Batman and Peacekeeper-01, former Arkham Asylum guard Sean Mahoney, duke it out.

Commissioner Renee Montoya confronts Mayor Nakano about the use of Saint’s peacekeepers, telling the mayor to reconsider because he’s giving too much power to one man too quickly. Nakano disagrees, and the two argue over whether or not there’s another impending gas attack so soon after the Arkham attack in Infinite Frontier #0. Montoya tells the mayor that the GCPD sees no imminent threat, but Nakano refuses to listen to her. He then jumps on a call and informs an assistant to leak information about the Magistrate program to the press.

On the news, analysts discuss the idea that supervillains, including the latest threat from Scarecrow, are constantly trying to top each other. The analysts stir up a frenzy by noting that Joker, through “Joker War,” was trying to top Bane in the “City of Bane” arc. Now Scarecrow’s made a move for something bigger.

At the Clocktower, Oracle calls in for backup since Batman hasn’t responded in quite some time. Nightwing answers the call, telling Oracle that he’s coming in from Bludhaven just in case.

In a flying saucer hovering five thousand feet above Gotham, Simon Saint enters the command room of his Magistrate Skybase-01. From there, he can monitor the battle between Batman and Peacekeeper-01, which has been going on for eighteen minutes now.

Peacekeeper-01 taunts Batman, telling the caped crusader that he’s only encouraged the rising violence and supervillains in Gotham. Batman counters by telling Sean that if he wants order, he should go after Simon Saint for bombing City Hall. That’s when Peacekeeper-01 openly admits to helping Saint plant the bombs in order to push the city toward a new era of order.

As Batman #110 continues, the two continue to battle and argue, with Sean Mahoney monologuing about Batman running around with criminals. He tells Batman that both the Bat and that “cop-hater” Commissioner Gordon only made Gotham even rougher around the edges.

Batman flees the scene, knowing full well that Peacekeeper-01 has the battle this time. As Batman runs, Oracle calls in Ghost-Maker, who has positioned his ship, the Ghost-Stream, nearby.

Right before Sean can land a winning blow on Batman, the Bat counters by exploiting a weakness in Peacekeeper-01’s neck armor. Then, he blows up part of Saint Industries. Ghost-Maker, aboard the Ghost-Stream with Harley Quinn, notes that the explosions were timed with a morse code. Ghost-Maker leaps out of the Ghost-Stream just as Batman leaps out of Saint Industries and catches Batman midair.

Peacekeeper-01 watches from afar, communicating with Simon Saint about how powerful he feels. Sean believes he can kill the Bat this very night, but Saint calls Sean off, as they have other work to accomplish.

Aboard the Ghost-Stream, a news report details Nakano’s partnership with Saint Industries, noting the Magistrate program and naming Sean Mahoney as the man leading the team of peacekeepers. Harley hears this, then tells the team that Sean had a terrible reputation at Arkham, stemming all the way back to when she was a newly hired doctor there. According to Harley, Sean is a sadist, and he often got in trouble for roughing up and tormenting inmates.

Batman tells Harley that most of the records from Arkham were destroyed in the A-Day attack, which is why this information isn’t publicly available. Before they can continue their discussion, Oracle informs the team that a fleet of helicopters are converging on abandoned, half-developed buildings near the south of Gotham. The Magistrate is about to take down the Unsanity Collective.

Inside Gotham 2.0, evacuation is underway, but not everyone has left. Miracle Molly is still there with another member. They are surrounded by peacekeepers. Despite raising their arms and surrendering, Sean Mahoney tells Simon Saint that he’s being met with armed resistance. He’s asking for permission to use lethal force, which Saint grants.

Analysis: In the beginning of Batman #110, Scarecrow informs Batman that the “Fear State” is nearly upon Gotham, and judging by the developments in this issue (as well as the Fear State event coming soon), Gotham City is looking pretty fearful. Despite protests from Commissioner Montoya, Mayor Nakano implements the Magistrate, an organization that wastes no time in assaulting and scapegoating the Unsanity Collective.

Batman, meanwhile, has met his match in Peacekeeper-01. He barely escapes, surviving only by the aid of Oracle and Ghost-Maker. The plotting is tense and fast-paced, and the art continues to stun. Batman #110 is the explosive, edge-of-your-seat battle we’ve been waiting several issues for as all of the ingredients writer James Tynion IV and artist Jorge Jimenez have been carefully adding to this pot come to a boil. It doesn’t disappoint either. Jimenez, with coloring by Tomeu Morey, does an excellent job of making readers feel every punch. He emphasizes every blow in a way that convinces us that Peacekeeper-01 is the new heavy that we should be afraid of. Batman has the wits, but Peacekeeper-01 has the latest tech, an armed and operational support team, and an unhinged level of anger that will only find support from City Hall and Saint Industries.

Beyond the surface-level story in this issue, Tynion plays on themes that we’ve seen unfold on social media, television, and other broadcast outlets within the past year. Peacekeeper-01, Sean Mahoney, clearly embodies the bad side of policing without checks and balances. He takes advantage of the fear and the need for security, and he uses it to work out his personal issues through violence. Tynion seems to channel several decade’s worth of unchecked law enforcement into Mahoney’s character.

For one, Mahoney refers to the man who refused to hire him (as noted in Batman #109), Commissioner Gordon, as a “cop hater.” This is interesting in that Gordon is ever the model of a good, positive example of a police officer. In his early years, Gordon refused to turn the other way and accept a bribe, and he has a reputation of cleaning up the GCPD and keeping officers in line and following the law to a “T.” Mahoney calls Gordon this, one can assume, because Gordon wouldn’t hire police known for taking bribes and therefore enforcing a high level of standard among his officers. In Mahoney’s eyes, it seems that any commissioner who doesn’t fully support his officers, regardless of infractions or reprimands, is a “cop hater.” This ties into one pervasive view that any criticism of the police is considered to be “against the police” or “against law enforcement” in some way.

Secondly, Mahoney refers to the Bat-Family as “hippie friends” of Batman. It’s unclear why someone in 2021 would refer to anyone as a hippie. The term is silly and outdated, serving as a reminder of the late 60s and 70s. Its usage implies that Tynion may have taken some inspiration for Mahoney’s character from the police response to protests of the 60s and 70s. This also makes sense when noting that the Unsanity Collective, a group intent on shedding themselves of the current “system” and embracing a utopian vision, is the scapegoat for the bombing of City Hall. They’re as close to hippies as we’ll see in modern-day Batman comics, and in Batman #110, they are last seen as soon-to-be murder victims of the peacekeepers.

Lastly, Mahoney, as Harley informs the Bat-Family, had a problematic history at Arkham. His history was covered up prior to the implementation of the Magistrate, but Harley notes how Mahoney had quite the record, often getting reprimanded by Dr. Arkham. This is supported in this issue, as there are two moments where Mahoney requests to use lethal force — first to kill Batman, then to eliminate surrendering members of the Unsanity Collective. He’s clearly a villain, and the skeletons in Mahoney’s closet feel reminiscent of the ways police departments have often hidden or covered up unsavory histories of some of their ranks. Derek Chauvin comes to mind, as he was recently convicted of murder and had eighteen complaints on record throughout his career, but he is far from the only example.

A few issues ago, Mahoney’s background was scrubbed and tailored by a PR team in order to cover up a less-than-perfect image of Gotham’s would-be new hero.

It’s interesting to see Tynion take inspiration from current events, especially with them so prevalent and fresh in the minds of readers. Though this arc may be ending, we’ll see where Tynion takes these ideas in the upcoming Fear State event.

Synopsis: The backup in Batman #110 sees Ghost-Maker battle Madame Midas’ army of robots on Devil Skull Island. Meanwhile, Instigator, a man turned into an alligator (like Killer Croc), implores Madame Midas to throw everything she has at Ghost-Maker now.

Instigator then relates his tale of his first battle with Ghost-Maker, of how he invited Ghost-Maker to battle and lost. Madame Midas, after some consideration, appears to take Instigator’s words to heart and orders her computer to collapse all-access tunnels down on Ghost-Maker.

Analysis: Much like the last few issues, this backup story features another origin for one of Ghost-Maker’s villains. It’s fun, and the art is cute. If you’ve been enjoying these backups thus far, this might be the best one yet.

The ending of this installment is a cliffhanger, though Ghost-Maker will most likely survive the explosion in the final panel. Duh.

Batman #110 is the exciting, fast-paced, tense showdown between Batman and Peacekeeper-01 we’ve been waiting for, and it doesn’t disappoint.