Review: The Next Batman: Second Son #4 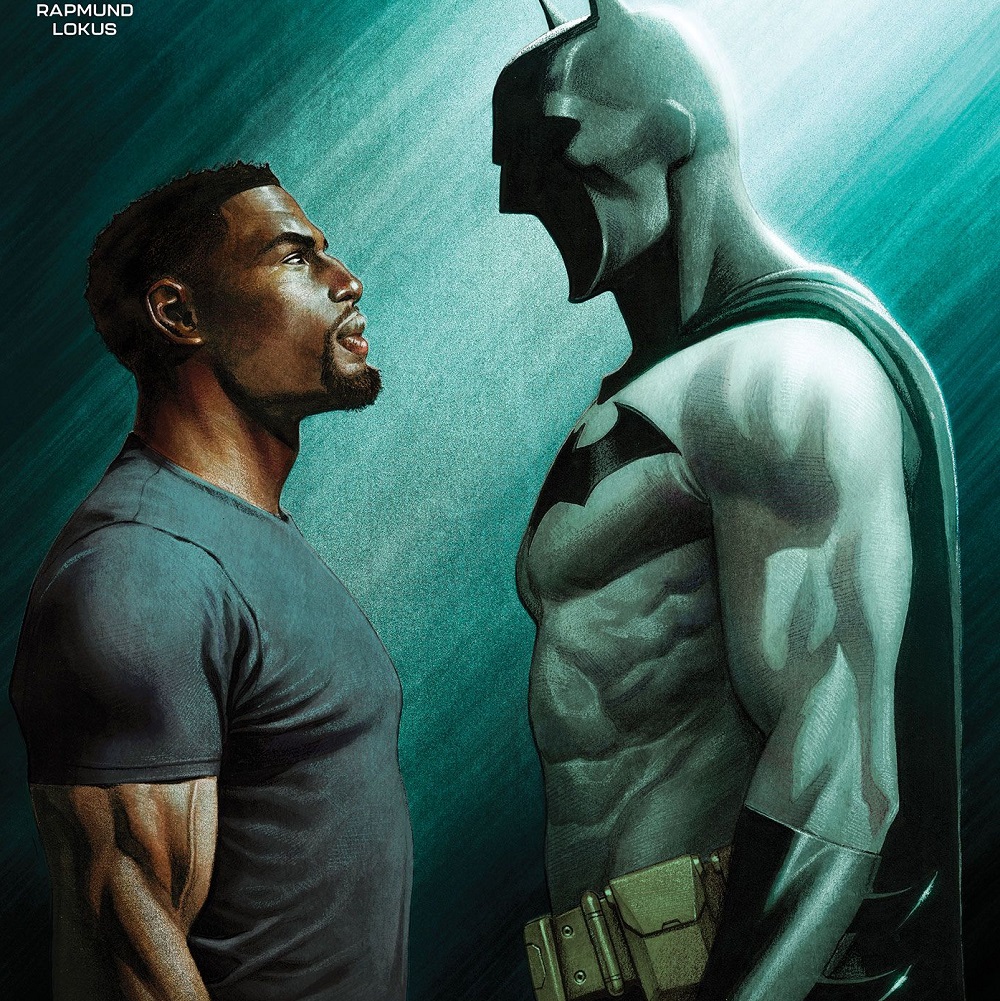 Overview: The Next Batman: Second Son #4 (collecting digital chapters #10-12) of John Ridley’s story of the Fox family wraps and Jace’s journey to the mantle of the Bat finds Jace face-to-face with Arkadine’s hired gun. Can he handle things on his own or will he require assistance?

Synopsis (spoilers ahead): As The Next Batman: Second Son #4 begins, Jace watches as his father meets with Mayor Nakano and Simon Saint as they attempt to get Lucius involved in the Magistrate program. Jace gets a message from Vol. Arkadine’s courier is making a drop tonight. He warns Jace about making a move alone since the courier is heavily guarded. But Jace feels he needs to move no matter the cost. As they watch a protest on the streets of Alleytown, Whitaker and Chubb discuss the status of their partnership. Chubb tells her partner that Commissioner Montoya knows about him falsifying his report about Batwing getting away in the incident with Ratcatcher. In another part of Gotham, Jace heads towards the vehicle carrying Arkadine’s courier. He causes the vehicle to crash before he begins taking out some of the bodyguards. He eventually comes face-to-face with Eabha O’Roark, who he battles until she stabs him. As Jace falls bleeding, they realize another player has entered the game. Katana has arrived.

Katana and Eabha O’Roark battle it out in the streets of Gotham as Jace continues to bleed from his stab wound. No longer feeling safe, the courier attempts to leave, but is stopped by the bleeding Jace, who finally gets the bag the courier’s been carrying off of him. Katana gets in a few more hits on O’Roark before the GCPD arrives, ordering them all to the ground. O’Roark throws a knife into an officer’s shoulder as Detective Chubb orders them to open fire. Katana quickly incapacitates the remaining officers as well as Chubb and Whitaker before grabbing Jace and taking off. At the Acevedo home, Tanya makes a hefty settlement offer to the family in return for dropping their case and signing an NDA. Despite the son’s objections, Enrique Acevedo’s widows accept. As Tanya sets to leave, the Acevedo son vows to hurt the Fox family. Tanya welcomes him to try. As they rest on the Gotham docks, Katana, who was called in by Vol to help, criticizes Jace for his recklessness against someone with the likes of Eabha O’Roark. They discuss all the decisions Jace made since he’s been away from Gotham, including changing his name. As she prepares to leave, she advises her former student to let go of the guilt he’s been holding since the day he killed Enrique Acevedo. It needs to be done for himself and those who care for him.

At the Fox residence, Tanya attempts to speak to Luke about Jace’s injuries. Still not accepting his brother’s new identity, Luke brushes it off as just another case of Tim Fox being Tim Fox and fusses over his dad for bringing him home. Tiff, still upset over Tam’s condition, criticizes Luke for not doing enough to help cure her. Luke leaves in disgust and disappointment in himself. At Wayne Enterprises, Jace and Vol are looking over the dossier Jace took from Arkadine’s courier. The file contains information on individuals from extremist groups, but no information is giving why they’re in the dossier. Vol also mentions that with the Wayne Tech info Jace gave him access to, he’s identified several encrypted files. The first is a set of files referring to “The Clade of Chiroptera;” the second is a secret hidden level in subbasement three – a level that doesn’t exist in normal schematics. He’s giving Jace access to the private elevator to get there. While this is going on, Simon Saint meets with Lucius Fox again to pitch the plans for his Magistrate program and why Wayne Tech should be involved. Gotham remains in trouble. What happens when the next Joker War or A-Day happens? The people of Gotham must stand up for themselves and Lucius plays a vital role in making that happen.

Jace makes his way into subbasement three. As the lights come on, he realizes that the level is heavily damaged. Jace sees a working terminal and attempts to open some secured files on it as he works on the files, Vol informs him that “Clade of Chiroptera” is Greek. It means “The Family of the Bat.” Jace opens the files on the terminal and realizes that subbasement three is a test armory. A door opens, revealing a piece of Bat armor. Jace’s father and Bruce Wayne are working for Batman.

Analysis: What a letdown. After three issues of a great story with a great build-up, The Next Batman: Second Son #4 ends on a real flat note. This is unfortunate. I gave Ridley a pass on Future State as most of the Gotham stories in that run ended pretty flat. A pass can’t be given this time. From how the story was presented to us by DC, Second Son was going to get us to how Jace accepted the mantle of the Bat. This did not happen. Instead, we got a story that will now lead into another story (I Am Batman is scheduled out in August). I had Scott Snyder vibes in getting to the end of the story and this isn’t meant as a compliment. Scott Snyder is infamous for telling stories that don’t have any closure. There is no ending. This is the same vibe felt here. With the story told, there was far enough time and space to bring the Second Son story to an actual stop point while leaving breadcrumbs for what’s to come in I Am Batman. That didn’t completely happen.

There were plenty of plot points to lead readers into the next part of The Next Batman saga. First, there is the relationship between Jace and Hadiyah (she’s introduced in the last issue). This is definitely a story to build upon. Then there are the six individuals in the Arkadine dossier. Who are they? The first guess is that these are possible Magistrate recruits making their way to Simon Saint. Even if this is not the case, it still enough to bring us into the next story. There is a quasi-Bruce Wayne/Jim Gordon relationship between Jace and Detective Chubb that appears near the end of Future State. It isn’t addressed in Second Son, but Ridley clearly shows how Chubb began to acquiesce to the character in Future State. She doesn’t believe in the no-mask rule, but as someone who’s by the book, she accepts it. By the time The Next Batman: Second Son #4 ends, the no-mask edict is ingrained in her. At some point, however, something changes in her that allows her to tolerate Jace. That story should be covered in this next volume. I personally wanted a better ending to Second Son. I didn’t get it and that’s unfortunate.

My comments about the art has not changed. For a digital first series, it leaves a lot to be desired as Travel Foreman’s art appears rushed, making it overly simplistic and in some ways amateurish. Foreman is slated for pencils in the upcoming series along with Ridley. Seeing that the series will be a monthly book, one would hope that the art will be better. The story that Ridley has been telling deserves it.

The Next Batman: Second Son #4

After three great issues, Ridley ends Second Son on a flat note as he prepares for the next phase in his story of the Fox family and Jace's ascension to the mantle of Batman with I Am Batman. Hopefully, the story ends better than its predecessor.