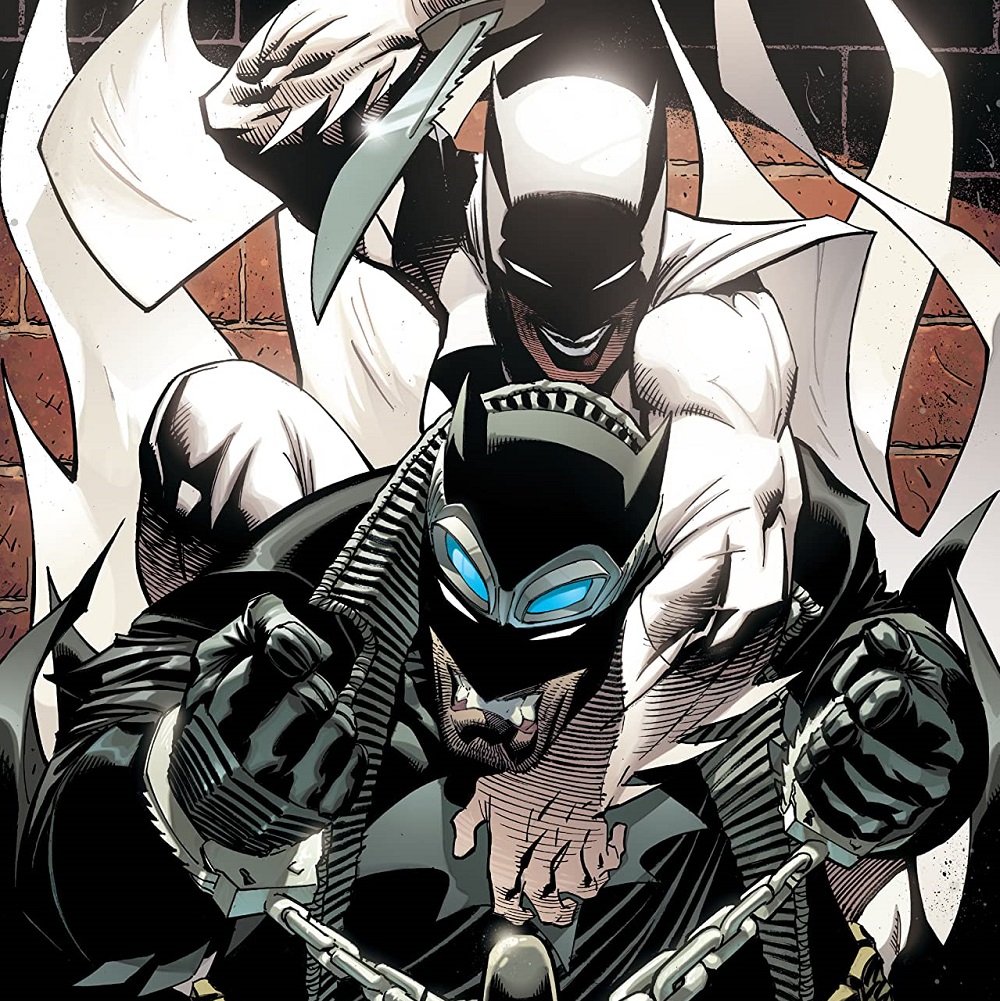 Overview: In Batman: The Detective #4, Bruce Wayne gets interrogated by the police only to be attacked by Equilibrium.  It is now time for the European Alliance of the Bat.

Synopsis (spoilers ahead): Batman: The Detective #4 being with Bruce Wayne in Interpol headquarters in Lyon.  He is being questioned for the attempted murder of Henri Ducard.  He takes a drink of water not realizing that it is soda water.  The police found a clue, a message with the Batman’s name on it. The pattern is that there is a message along with an increasing number of bodies.  The cops show Bruce crime scene photos including photos of the various victims.  Bruce in reality recognizes each and every one of them.  They are all people that Batman has saved in his career.  There is someone hunting these people and killing them.

Bruce tells the interrogators that he does not recognize any of them.  The police tell Wayne that Ducard was shot in a hotel room, a room paid for with Bruce Wayne’s credit card.   The interrogators handcuff Bruce’s hands to the table and he starts to sweat obtusely.  The questioning changes direction, the questioners ask about Batman.  Bruce dodges the question with sarcasm and asks to have a drink of water.  The woman states that Wayne himself had been saved by Batman on several occasions.  She then plunges a knife into Bruce’s shoulder.  She had thought that Bruce was Batman but she was able to drug him with the water, she would not have been able to do that to Batman.

Bruce seems to lose consciousness.  In reality, he slows his heartbeat to slow the poison in his system.  When he is sure that the “cops” are gone, he breaks the chains and escapes the interrogation room.  He finds a dead cop, a man that Batman once helped.  He takes the man’s uniform and stumbles out of the area.  In the lobby, he is met by Amina, Squire.  She brought a lawyer to help and the two leave.  Bruce tells her that he is dying.    They go to a pharmacy and Bruce takes several pills.  Bruce tells Amina that it is cyanide poisoning and collapses.

He dreams of friends, loves, and those he lost.  He also dreams of the countless lives he has saved in his career.  Bruce wakes up.  He has been out for two days.  Bruce asks Amina how many people Equilibrium has killed while he was out.  She tells him that Beryl could confirm over two hundred people.    Bruce has to move, Amina urges him to rest.

Batman sends Amina for a fruit order.  He gave her specific fruits to pick up as a code.  Beryl sent Amina to France to join him without asking him.  Batman would have refused anyways.  While they wait, Amina now in costume as Squire and Batman wait for the mobile Batcave to arrive.   Batman sends the woman who came with the cave underground to hide.  Batman orders Oracle to take the cave out.  With the computer, he scrubs all footage showing Bruce Wayne leaving Interpol.  He runs a visual search for any woman with an olive complexion and dark hair.  He identifies the woman who was interrogating him.  Batman instructs Oracle to activate the European Alliance of the Bat.  On to Brussels.

Analysis: The premise of Batman: The Detective #4 is very interesting and personal.  To hunt down previous benefactors of Batman’s actions seems to undo the good he has done as well as wage a psychological war on the mind of Batman.  There is not further intelligence on who Equilibrium is, that will come soon.  This story also focuses on one of my more favored aspects of the Dark Knight mythology.  Batman as a detective.

Bruce is characterized as he usually is, a loaner.  Bruce’s allies mainly in this case Beryl, the English Knight is well aware of Bruce’s inability to ask for help and as a result she acts on her own in sending her partner to become his partner in this case.  Beryl herself is still recovering in seclusion from the injuries she sustained in the first issue; the attack that brought Batman to Europe in the first place.

Not much action in Batman: The Detective #4 but Bruce is uncharacteristically careless in the interrogation room.  He willfully drinks the water but at the same time, he knows what the poison is.  He could just be trying to shield who he really is, but that really is not clear.  We get the thoughts that show that Bruce is trying to show he is on top of the situation but I am reading in between the lines that he really is not.

The art is good but I do not like the design of Bruce Wayne.  He looks beefier than I would like to see and I do not understand his hairstyle.  With that said, I like the design of Batman here with his long high-collar trench coat and goggles.  It has the Nightmare Batman look form the Snyder universe but it also makes me think of how Damian is usually shown when he assumes the mantle of Batman in the future.

Despite my reservations about the art depicting Bruce Wayne, I like this story and its take on the Dark Knight, which makes me look forward to continuing the story.