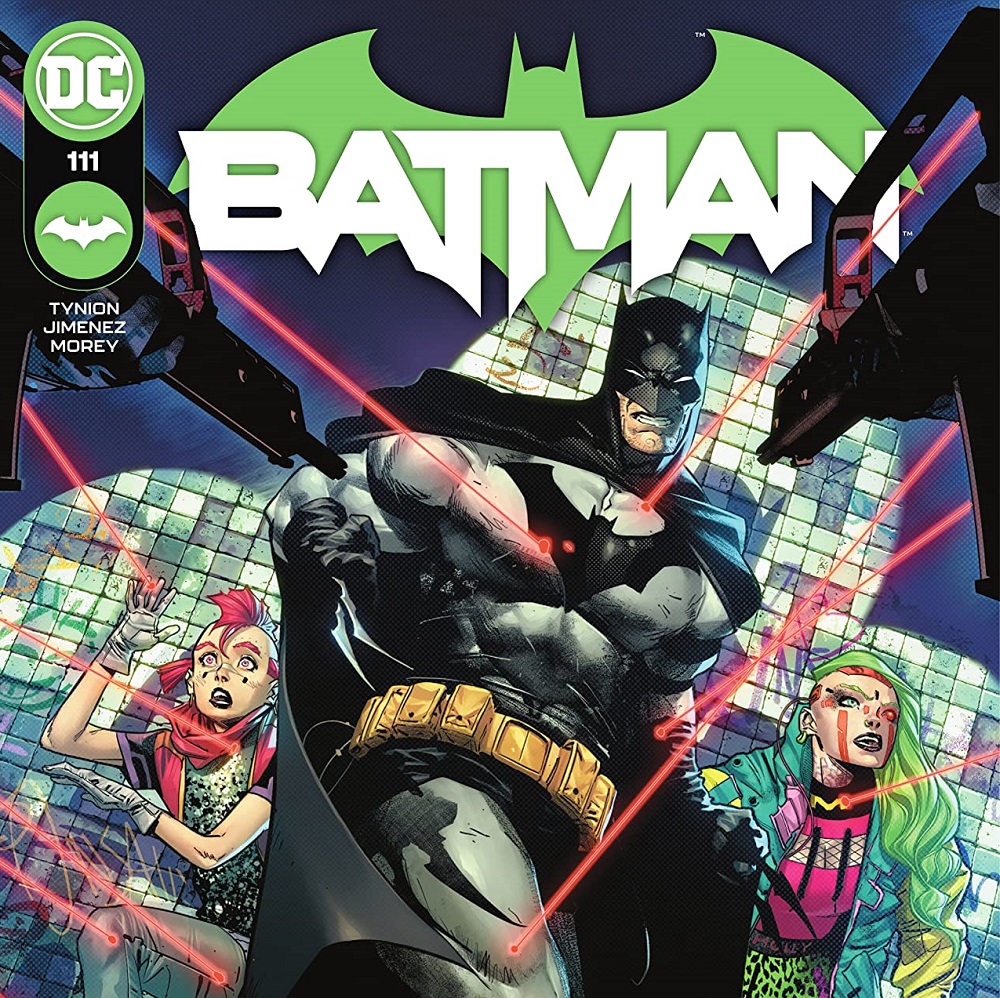 Overview: In Batman #111, the Bat-Family saves the Unsanity Collective while Batman tracks down Scarecrow.

Synopsis: Batman #111 begins in the near future, Scarecrow taunts Batman, telling him that he’s healing Gotham, that he’s teaching both Gotham and Batman on how to be better.

At the Unsanity Collective’s hideout, Miracle Molly tells her friend, Squeak, to look her in the eye as Peacekeeper-01 aims his gun at them. Molly’s cybernetic eye tells Squeak to scream, and she does, letting out a blast that disrupts the Magistrate force around them. Miracle Molly and Squeak make a run for it. Breaker joins the fray, attacking Peacekeeper-01.

Molly and Squeak make it to Master Wyze. Once they catch their breath, they realize both of them have been hit. Molly was just grazed, but Squeak’s wound seems much more fatal.

Batman, Ghost-Maker, and Harley Quinn aid Breaker against the Magistrate. As the Bat-Family fights, Oracle tells Batman over the comm that this is all playing out live on TV, recorded by Magistrate drones. News headlines are accusing Batman of siding with villains and social media buzz is blaming him for planting the bombs that rocked City Hall (as seen in Batman #110).

Molly gets Batman’s attention and tells him about Squeak’s wound. Batman orders Ghost-Maker to open the doors to the Ghost-Stream, and the survivors high-tail it to Ghost-Maker’s ship, all except Breaker who falls in battle. The rest make it. Simon Saint tells Peacekeeper-01 that the Magistrate has the upper hand.

Aboard the Ghost-Stream, the Bat-Family works to patch up Squeak. Batman tells them that he slipped a tracker on Peacekeeper-01, noting that the Magistrate leader is heading to Arkham, which is where Scarecrow must be. Batman orders the team to keep the Unsanity Collective safe while he heads off to apprehend Scarecrow first.

At Arkham, a projection of Simon Saint congratulates Scarecrow on a job well done, noting that it’s time to de-escalate. Peacekeeper-01 is there, playing the projection for Scarecrow who is busy working on something. Scarecrow disagrees with the plan, then says he wishes to push Gotham further into a true “fear state.”

Saint, aghast at this betrayal, orders Peacekeeper-01 to take down Scarecrow. Scarecrow hits Peacekeeper-01 with a heavy blast of fear toxin, which propels Sean Mahoney into a nightmare state. Just then, Batman arrives, and Scarecrow gets the drop on him, too.

Analysis: This six-issue arc finally leads up to the near future teases each issue has opened with, with Batman finding himself Scarecrow’s captive by the close of Batman #111. The Unsanity Collective joins forces with Ghost-Maker, Harley Quinn, and Oracle in this issue, having been saved by them from the Magistrate. The rest of the issue is, more or less, the cleaning up of any cliffhangers and setting the pieces wherever they need to be for the upcoming Fear State event to begin, as well as tie into early 2021’s Future State event.

Scarecrow has Batman. Peacekeeper-01, Sean Mahoney, has been dosed with fear toxin, which assumedly will make him even crazier and more unhinged than he is now. The Magistrate has been given carte blanche access to Gotham by Mayor Nakano, and masked vigilantes have been framed as terrorists. The one loose end that comes across as inconsistent is Simon Saint’s scene with Scarecrow.

Throughout this whole arc, Saint has appeared to be the skittish, terrified little pawn of Scarecrow. He’s had Scarecrow watching him afar in almost every issue of this arc, and Saint has appeared to be a sniveling, mortified wreck whenever Scarecrow has spoken to him. That said, it’s weird that Saint suddenly congratulates Scarecrow and then dishes out commands, only to act bewildered at Scarecrow’s double-cross. To that point, why would Saint only send Peacekeeper-01 to apprehend Scarecrow, too? Surely some of the other members of the Magistrate helped with the planting of the bombs. This strange about-face makes little sense, but depending on how Fear State plays out, it may become a moot point. In this issue, it’s clearly a means to an end – the end of Saint’s partnership with Scarecrow.

Beyond that, there really isn’t much to say about the narrative of Batman #111. The action from the last issue quiets down, and we’ve finally given some kind of payoff to those opening “near future” Batman/Scarecrow panels the past few issues. It’s not the most exciting ending in the world, especially since readers have been expecting Batman’s capture by Scarecrow for so many months now, but it’s satisfying enough in that the story feels like it’s where it needs/wants to be.

Jorge Jimenez continues to deliver incredible art, and Tomeu Morey’s colors are phenomenal. I feel like a broken record saying this every time, but the pairing of these two is a masterwork of beautiful comic art. In particular with Batman #111, Scarecrow’s new design is on full display, and he looks haunting in a way we haven’t quite seen before. With his insanely long hair, that gas mask, and his massive spine, Scarecrow has the quality of some kind of demon-like entity – no longer human or of this world. This design really sells readers on the idea of Scarecrow being a big bad, especially since, so often, he’s sidelined as either a helper to some other foe or some nutjob singing nursery rhymes. It shouldn’t be understated that Clayton Cowles’ letters for Scarecrow also add a spooky and specter-like quality.

Synopsis: Beneath ninety tons of rubble, Icon pleads with Ghost-Maker to get back up on his feet and push forward.

Elsewhere on Devil Skull Island, Ghost-Maker’s villains debate over whether or not the hero is truly dead. Razorline tells his origin story now. In Razorline’s story, a young man obsessed with both pleasure and pain travels the world in search of such extreme sensations, building churches devoted to pain. He encounters Ghost-Maker, who withstands the gruesome things Razorline has studied and learned. Ghost-Maker stabs Razorline, taking away his sensation for pain or pleasure, which ultimately robs Razorline of his true power.

Razorline tells the villains that this is all a ruse, that Ghost-Maker will withstand this, too, rising once more.

Analysis: This is the most colorfully gruesome entry in Ghost-Maker’s saga so far, and it’s one that pays a lot of homage to Clive Barker’s Hellraiser. Razorline’s entire origin is very similar to Frank Cotton’s in Hellraiser – a man seeking out extreme pleasure and pain. Furthermore, his design bears an uncanny resemblance to that of the cenobytes featured in the film, coming across as some sort of mummy crossed with a Pinhead-inspired design. It’s fun, if extreme body horror is your jam, and if you’re a fan of Hellraiser, even the chains make a cameo.

Batman #111 ends as one would expect, laying the groundwork for the upcoming Fear State event. It’s fun, albeit predictable.