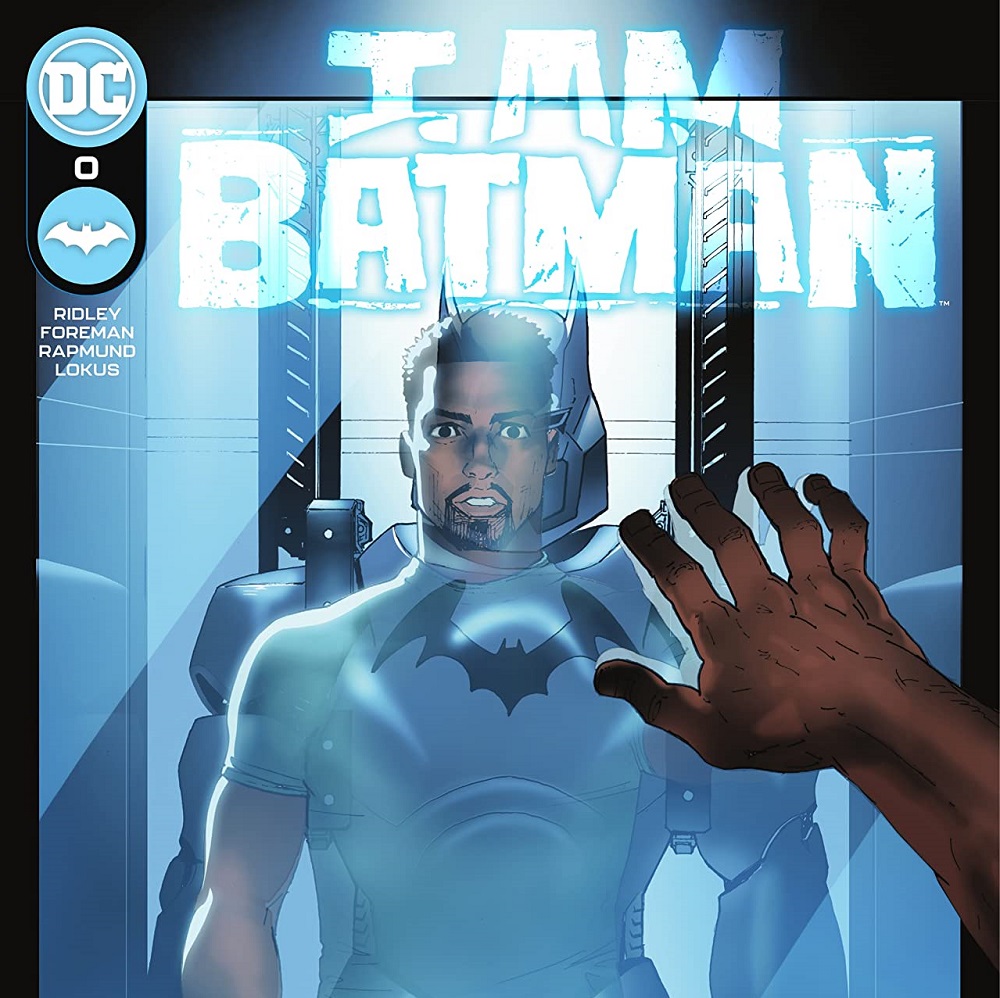 Overview: I Am Batman #0 begins as tensions mount in the Alleytown borough of Gotham City, Tim Fox uncovers a plot to escalate the necessity of a Magistrate and attempts to intervene by adopting the mantle of the Batman.

Synopsis (spoilers ahead): I Am Batman is the next in the series of story arcs that serve as the potential lead-up to the Future State series The Next Batman, in which the costume is donned by Tim Fox, Lucius’ Fox’s prodigal son.

I Am Batman #0 begins with a flashback, years ago in Kyoto, Japan. Tim Fox is practicing the martial arts with Vol and Katana, in which we discover that he was training to be a guerrilla. It’s at this point he first refers to his preferred name, Jace.

We then flash forward to the present, with Tim saying goodbye to his family, prepared to move into his own place, better to keep his new nightlife private.

We then cut to Alleytown, where a demonstration of protesters is being confronted by the Gotham SWAT team, members of which are deliberating on the best method of maintaining order. After a leading SWAT member gets hit by a stone, however, he decides to use force against the mostly unarmed civilians.

After the riot, Commissioner Renee Montoya dresses down the lead officer who lead the riot against the protesters and asks for his resignation letter. Shortly after he leaves, Detective Chubb enters and thanks the Commissioner for not firing her partner, Whitaker, for being ‘soft on masks’ and assures her that he’ll do the right thing when it counts. Montoya then informs her that she and Whitaker will be the officers in charge of keeping the peace at the next demonstration.

Lucius Fox has a heart-to-heart with Tim, telling him that he’s proud of the responsible man he’s become, trying to prove himself as an asset to his father’s company by staying after hours. Through inner monologue, however, we know that Tim’s reasons for doing so aren’t for his father. This inner monologue is interrupted when he is approached by Hadiyah, a woman from Tim’s past who, through her mother’s company, will now be working closely with FoxTech. After a somewhat awkward exchange, Hadiyah agrees to meet up with Tim within the week.

In the secret Batcave hidden within FoxTech, Tim talks with his operative, Vol, who has been spending his time trying to crack the security around the Batsuit, which Tim wants to use to teach the privileged of Gotham City that they aren’t above the law. Additionally, Vol has tracked the location of one of the six left-wing radicals from the previous arc. Tim sets out to find them.

The signal leads, of course, to an abandoned warehouse by the docks, where two men are working on explosives. Tim gets the jump on and dispatches them, and finds the dead bodies of the six radicals hidden inside. The men outside regain consciousness, and one of them sets the timer to the explosions, abandoning the other and running off. Jace overhears, grabs the other goon, and manages to escape the explosion in the nick of time. Jace gains intel from the thug; he and his partner had been paid to set off the explosion after the demonstration in Alleytown, making it look accidental, and hired by an unknown player.

Tim races towards Alleytown, where the demonstration has just begun. Chubb and Whitaker feel the squad’s tension in the air, and soon rogue shots are fired from the protesters, nearly causing a scene identical to that of the beginning of I Am Batman #0.

Before things can escalate further, however, smoke fills the air from specially manufactured canisters, and Tim Fox, for the first time wearing the Batsuit, enters the scene and begins to pick off the bad actors on the civilian side. Chubb, seeing Batman attack civilians, fires on Jace. Her bullets, however, are no match for his armor, and he approaches her to try to explain his actions. Before they can get on the same page, however, Tim is attacked by the Peacekeepers of the Magistrate. The Magistrate’s firepower outpowers that of the GCPD, and Batman is taken down. Vol activates the suit’s Chaos Mode, which ejects sonic smoke canisters from the suit’s back. Jace exits the Batsuit and flees to safety, but now the Batarmor is in the possession of the GCPD and the Magistrate. What’s worse: his attempt to make a positive impact during the riot has vilified the Bat’s name in the public’s eye.

The next day, Jace and Hadiyah meet up and without knowing what he’s going through, she manages to encourage the Fox prodigal son onto his path to becoming his own version of the next Batman.

Analysis: I Am Batman #0 leads into the proper introduction of Tim ‘Jace’ Fox as the next Batman sets up not just the origin of our still-mysterious protagonist, but also showcases the undertones of the world the creatives are building for the necessity of this specific personality.

It’s a story of the conflict between a police-state and a city crying out for peace and security. Mayor Nakano’s acceptance of Simon Saint’s Magistrate program has understandably made the residents of Alleytown uncomfortable. A private contractor hired by the government that is more powerful than the police is a threat to their security, privacy, and civil rights. The connection to a Big Brother order is very clearly told in this story. Alleytown has already suffered through the Joker War and City of Bane, and the city hasn’t had a chance to breathe, let alone rebuild before something equally as horrible rears its head before the events taking place in I Am Batman #0.

It’s a story of duty and integrity. The police department of Gotham City has always been tainted with crooked officers more concerned with personal profit and power over the mantra to protect and serve their citizens. This is shown in the actions of the unnamed officer who was quick to attack the protesters at the first demonstration. He feels empowered by his armor, weaponry, and license for violence to exert himself over the mostly unarmed citizens at the first act of physicality. When confronted on it by the Commissioner, he exhibits his hubris when he exclaims ‘Those people had no right to disrespect us.’ He sees himself as above the group of individuals as the law and takes their message (even before he is hit by a stone) as an anti-law-abiding affront. Commissioner Montoya asks for his resignation, understanding that his ill-intended perceptions go against the idea of preserving the law and nurturing trust within the community. We see this in the second demonstration when Detective Chubb, seeing Batman ‘attack’ the citizens, which she understands as her first and foremost concern in direct contrast to the leading officer in the first protest, proceed to attack him as the true enemy to peace.

There is a conversation between Montoya and Chubb regarding masks, which is not only about the rampant vigilantism, but also serves as a not-so-subtle commentary on the dangerous and at times irresponsible consequences of hiding behind the masks of social order, and behind a keyboard far away from actual confrontation.

It’s a story of safeguarding oneself, as well as your loved ones. Jace is struggling with his need for redemption, to raise and make himself useful for the greater good, while being stuck in a family divided by ideals and a multitude of complex pains. In order for Tim Fox to reach his goals while protecting the people he loves, he needs to move out from his family life. His past guilt keeps him from being fully trusted by most of the Fox family, who have varying degrees of discomfort with his presence, and his current actions keep him from fully confiding in the girl he loves.

Finally, it’s a story that teases the promise of perhaps the most looming question: Why ‘Jace’?

I am Batman #0 bridges the gap between the Jace of Second Son and the Next Batman we are familiar with in the Future State arc, starts out strong and demonstrates the atmosphere of a Gotham City not yet under the thumb of the Magistrate and still willing to fight back, with the simultaneous toe-dipping of a conflicted Tim Fox into the mighty boots of Gotham’s greatest hero. The setting of the city is topical, while the main issue of Jace’s ascension is set apart and independent of the action, keeping the overall story from becoming dated.

The buildup of the storytelling is tense and exhilarating, keeping me invested in the future of the series.