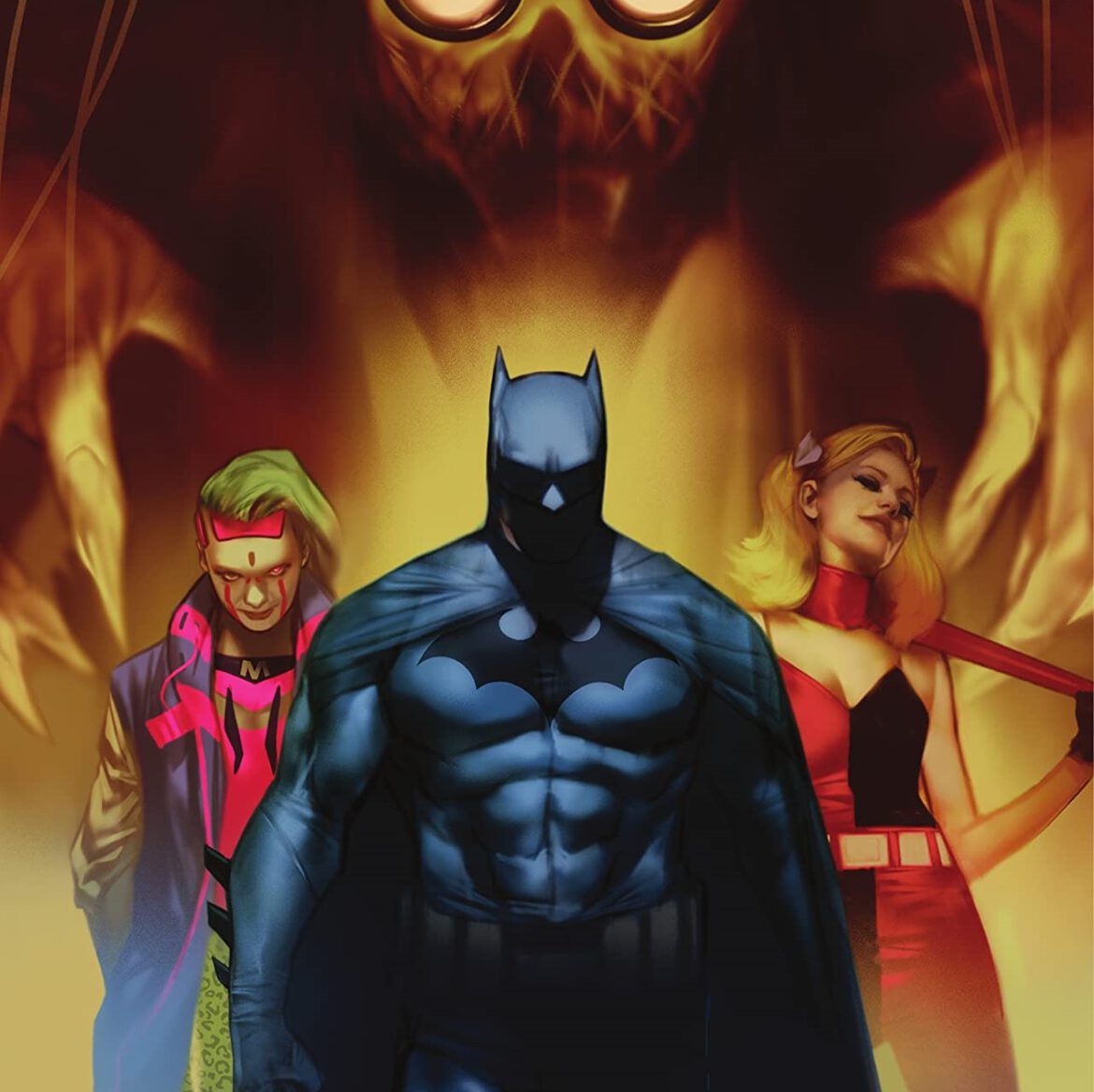 Overview: In Batman: Fear State: Alpha #1, Batman escapes Scarecrow’s clutches while the Magistrate blacks out all communications in Gotham City.

Synopsis (spoilers ahead): Batman: Fear State: Alpha #1 starts off at Arkham Asylum many months ago, Saint Industries CEO Simon Saint bribes Dr. Jeremiah Arkham in order to have a private meeting with Dr. Jonathan Crane, the Scarecrow. Saint begins by telling Dr. Crane that he is an admirer, but Crane shoots that down, calling it out for the false flattery it is. Crane knows that Saint sees utility in his work.

Saint persists, despite being afraid of Scarecrow. He tells Crane that his work has found an audience in Silicon Valley types, particularly the idea that society can be pushed along an evolutionary path after delivering a tremendous shock to its system. This idea, as Crane outlined, is called “Fear State.” Saint says that, while initially, it seemed impossible for a society to be pushed far and hard enough to enter a fear state, Gotham City might meet the criteria, especially after both City of Bane and Joker War.

Simon Saint outlines his idea to help control Gotham’s evolution after a fear state, and he asks Scarecrow to help him cultivate this environment. Scarecrow makes several demands, namely money, lab space, chemicals, Mad Hatter’s confiscated tech, and a way to mask his activities from Batman.

In the present, Scarecrow has Batman strapped to a chair. He taunts Batman, telling him that he has far greater tech at his fingertips than just fear toxin.

News stories blare out from different outlets across Gotham, summing up the events leading up to “Fear State.” Meanwhile, Peacekeeper-01 stumbles through the sewers, fighting voices in his head. He’s been dosed with a fear toxin (see Batman #111), and Saint desperately tries to call him home.

Aboard Saint Industries UFO, Simon unloads on his assistant, Ricardo. Peacekeeper-01’s location is cloaked, and Saint is upset that there’s no backdoor for them to locate their drugged-up peacekeeper. Saint tells Ricardo to commence a full media blackout, then run Magistrate PR to help sell Gotham that the Magistrate is what it needs. He then orders Ricardo to put all attention into the push into Alleytown.

At GCPD, Commissioner Renee Montoya gets Mayor Christopher Nakano on the phone and presses him about his trust in the Magistrate. Montoya doesn’t like it, nor does she believe that Sean Mahoney, Peacekeeper-01, is this great hero. The two argue, which results in Montoya destroying her phone. Afterward, she’s informed that the Magistrate has blocked communications. Montoya orders her officers to dig out old walkie-talkies and ham radios in the meantime.

At the Clocktower, Barbara Gordon, Stephanie Brown, and Cassandra Cain regroup. Barbara starts an Oracle broadcast over the old Gotham emergency broadcast system, but instead of her message, another message from “Oracle” blares out. This message tells people that Batman is dead and to trust no one except themselves. It raises citizens’ fears and encourages distrust in every institution they once had faith in, including the Bat-Family.

When the message ends, another, more private message, plays in the Clocktower. This one is much more brief, telling Barbara that the old Oracle is gone. Her computer then explodes. Barbara tells Cassandra and Stephanie to reach out to the Bat-Family.

Beneath Gotham, in Poison Ivy’s lair, Harley Quinn, Ghost-Maker, the Unsanity Collective, and the Gardener regroup. Harley pleads with Queen Ivy, a darker, newly grown strain of Ivy, to let her friends find safety in this underground lair. Ivy agrees. Gardener tells Harley that Ivy is missing a crucial piece of herself, but she has some ideas on how to get it back.

In Alleytown, Catwoman tells another, meeker Poison Ivy to stay put while she coordinates with her team. The Magistrate has entered Alleytown, itching for a fight. Elsewhere, Jace Fox gets ready to suit up as Batman.

At Arkham, while Scarecrow tells Batman that “Fear State” is finally happening, Batman breaks free from his bonds.

Analysis: Batman: Fear State: Alpha #1 is pretty much all exposition, but this isn’t necessarily a terrible thing. Alpha #1 is the kickstarter for this fall’s Fear State event, one that will intersect with multiple Batman-related titles. In this issue, writer James Tynion IV puts all of his pieces on the board, giving each team different motivations. For the heroes, the Batgirls will organize and coordinate the Bat-Family, Batman will fight his way out of Arkham, Catwoman will battle the Magistrate in Alleytown, Jace Fox will suit up as Batman, Harley will help heal Poison Ivy, and the Unsanity Collective will regroup and launch an assault against the Magistrate. With regard to City Hall, Commissioner Montoya will have to navigate running a police department with archaic communications, all without the support of Mayor Nakano, who is fully vested in Saint Industries. Lastly, Simon Saint will coordinate a Gotham takeover while simultaneously running a PR program in the hopes that it’ll distract the citizens of Gotham from his true intentions. He also hopes that this PR program will provide some cover as he tries to recover Peacekeeper-01, who is off the grid somewhere in Gotham. Scarecrow, of course, has his own designs for Gotham, and they conflict with Saint’s, which adds even more strain to the CEO.

This is where we find ourselves at the issue’s end, and it’s pretty clear-cut on what we can expect in the coming months for Batman and company. We also learn what “Fear State” means, and it’s nice to know that it’s not just a snappy event title. It’s a reference to Dr. Jonathan Crane’s research on how to use fear to cultivate evolutionary growth on a societal level. This research, ultimately, is what attracted Saint to Crane, which helps to explain why a reasonably intelligent man like Saint would be in bed with a known arch-criminal like Scarecrow. It’s an alliance born out of necessity, one that Saint has been uneasy with from the get-go (as evidenced by this issue’s opener).

Amidst the opening conversation between Crane and Saint, however, is an interesting morsel of information that might tie into James Tynion’s other book, The Joker. It’s been made pretty clear that despite all the blame pointing toward Joker, it was not Joker who launched the A-Day attack on Arkham Asylum. During the conversation between Crane and Saint, Crane mentions that, of his many needs, he needs a way to mask his activities from Batman. Tynion is careful not to confirm or deny anything, but Simon Saint, in delivering all the things Crane requested, may be the perpetrator behind the Arkham attack. Having Gotham assume Crane died in the gas attack is more than enough of a mask to hide Scarecrow’s activities, and Saint is clearly no stranger to blowing up buildings for the sake of his greater good.

Having said all that, the exposition-heavy issue that Batman: Fear State: Alpha #1 means that it’s not the most exciting or action-packed installment. It’s almost all dialogue, with characters standing around and endlessly gabbing with one another. The coloring is wonderful, hitting the right notes of haunting and mesmerizing — haunting with the Scarecrow scenes and mesmerizing with Poison Ivy’s lair, Eden. The art? It is what it is. Characters mostly stand around, lean on something, or sit, though there are a few awe-inspiring panels peppered throughout. Sometimes proportions seem to be a problem — namely Scarecrow, who looks like some kind of hunchback in his first, full-page appearance in costume.

It’s hard to critique what this issue should or could have done, given that there are so many moving parts and characters packed within. By the end, readers get a true sense of how large and all-encompassing this Fear State event is supposed to be (and it hopefully will be quite the finale for Tynion, who is exiting the book in November). Fear State promises a grand epic, and while this issue tries its hardest to carefully lay out the foundation for an epic, we’re left hoping that those promises will be more than met.

Batman: Fear State: Alpha #1 is one long, arduous read that painstakingly sets up everything we can expect from Fear State. It’s not the most gripping read, but it shows promise for the upcoming event.