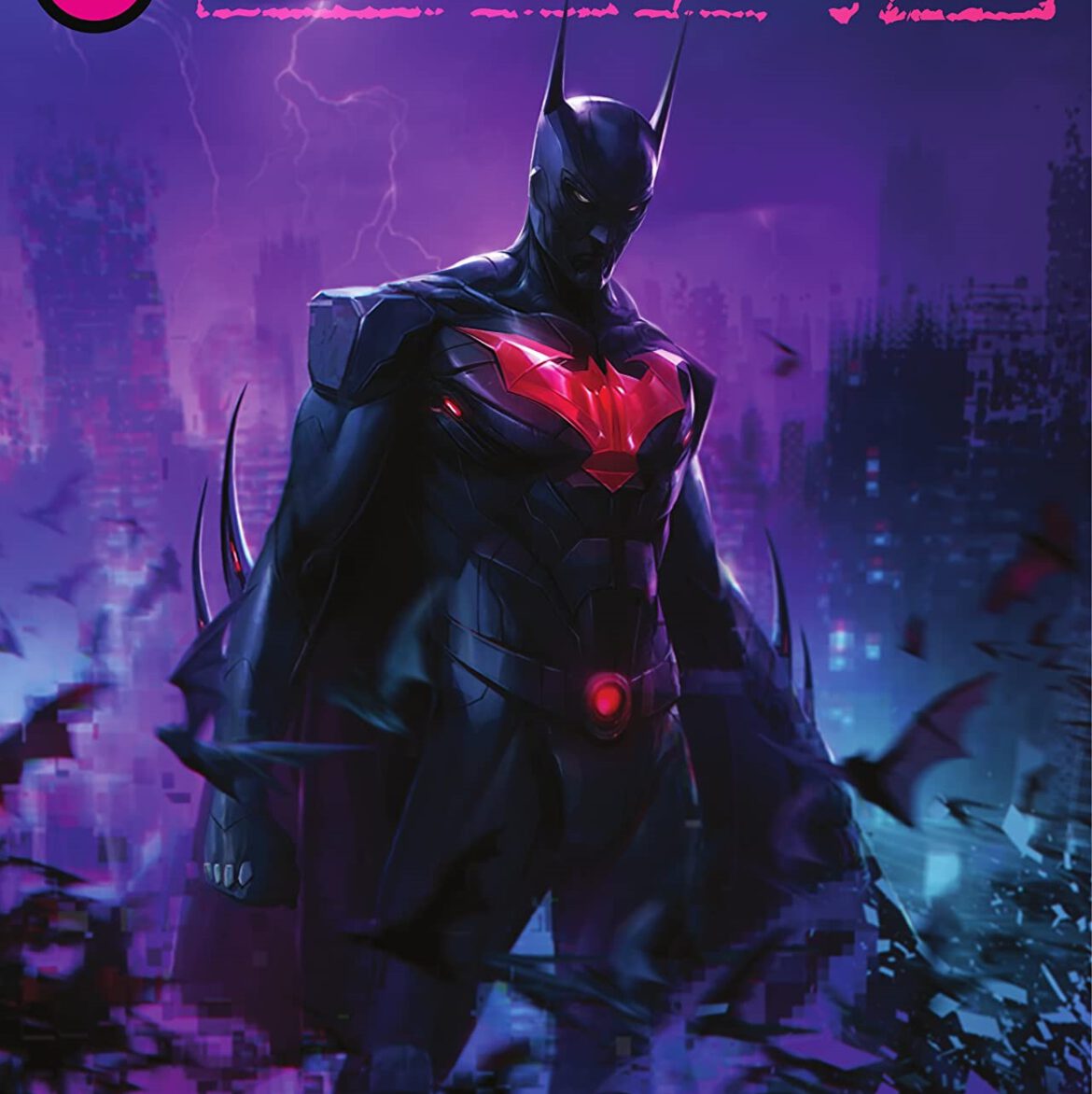 Overview: In Batman: Urban Legends #7, different Batmen from different possible futures battle against the forces of darkness that threaten to consume Gotham and beyond.

Story #1: Batman Beyond in “Wake” by writers Jackson Lanzing and Collin Kelly and artist Max Dunbar

Synopsis: The first story in Batman: Urban Legends #7 has Terry McGinnis recalling a conversation he has had with Bruce Wayne, whose body is laying on a slab with a cover sheet. Terry takes on the Maronis and demands to know who killed Bruce. He flashes back to a conversation with Bruce on his deathbed about picking up a gun. Flash forward, and Batman learns from an executive at the Wayne-Powers Building that all the money in Neo-Gotham is frozen. He realizes this requires root access just as a voice starts talking to him over the comm. Batman realizes that the voice is coming from the Batcave, and he fights his way back through Neo-Gotham. Batman confirms the rogue is a super-intelligence, an AI, just as he begins to fight some Bat-robots in the Batcave.

Batman makes his way out of Wayne Manor just as it explodes and looks out over Neo-Gotham, marking the new year with fireworks.

Analysis: I do not read Batman Beyond, so I am probably the wrong audience for this story. There’s quite a lot of backstory that I obviously do not understand. The discussion between a dying Bruce and Terry is marginally interesting in the way deathbed confessions can be, although it’s more than a bit hackneyed. The writing does not feel especially original, and it takes way too long for Terry to leave Bruce, fight his way through the city, and return (which is essentially all that happens). Batman Beyond fans may well find more here to enjoy, but it’s not a story in which I can muster much interest. (Editor’s Note: It is worth mentioning that this story ends with a promise of a new Batman Beyond story coming in April 2022 called Batman Beyond: Neo-Year #1, which may be a one-shot or the beginning of a new series.)

Synopsis: Batman enters ‘The Palegas Tower’ and tells the doorman he is there to see the Executive. He fights past Phosphorus Rex and the Weasel, and then battles Candyman and Jackanapes. He dispatches Max Roboto, the Flamingo, and Loveless. At the top, he finds the Executive, appearing as Alfred, Dick, and Bruce. They argue and banter, and the scene switches to Batman 666 perched on a gargoyle. He is watching the streets below until he sees a Joker make an appearance, and he swoops down.

Analysis: I am also unfamiliar with Batman 666. That said, grown-up Damian is more interesting than adolescent Damian, and the story is appropriately short. The fact that he is still haunted by the three main figures in his young life is worth noting – no one, including Damian can outrun their past.

Synopsis: In Future State, Cassandra Cain sits down to eat at a street cart. Before she can tuck in, a force of Peacekeepers appear behind her. Cass fights her way through and into a near building, where she is pursued. They catch up to her on top of the building where they are calmly taken out by Batman. He asks for her help across town.

Analysis: This is a sweet, simple story; there is not much to it, but there does not need to be. The art is not strong, however.

Story #4: Batman One Million in “The Batman With No Name” by writer Kenny Porter and artist Baldemar Rivas

Synopsis: On the prison planet Pluto in the 853rd century, Hades is governing. Batman and Robo-Robin are addressing the nightly prison break. A hologram enemy challenges Batman, who changes modes to the Dark Knight and defeats his foe. Hades and Batman fight. Batman defeats Hades and returns him to his cell and then defeats an enemy named Reader. Batman then disposes of the final enemy, named Cry-O, but also manages to find a way to help her.

Analysis: I liked absolutely nothing about the final story in Batman: Urban Legends #7. The dialogue is awful; it reads like pure Golden Age kitsch, but it isn’t clever or self-referential in any way. I still do not understand why DC is choosing to set stories in Urban Legends that are not Gotham-centric.

This issue really isn’t for me. I do not read Batman Beyond and generally dislike both Alternate Universe and futurist Batman Universes. The art is generally subpar as well in my view. If you like AU or futurist work, you may appreciate this issue. For me, it is definitely a low point in the book thus far and feels a bit tired, almost as if DC was struggling to find stories.