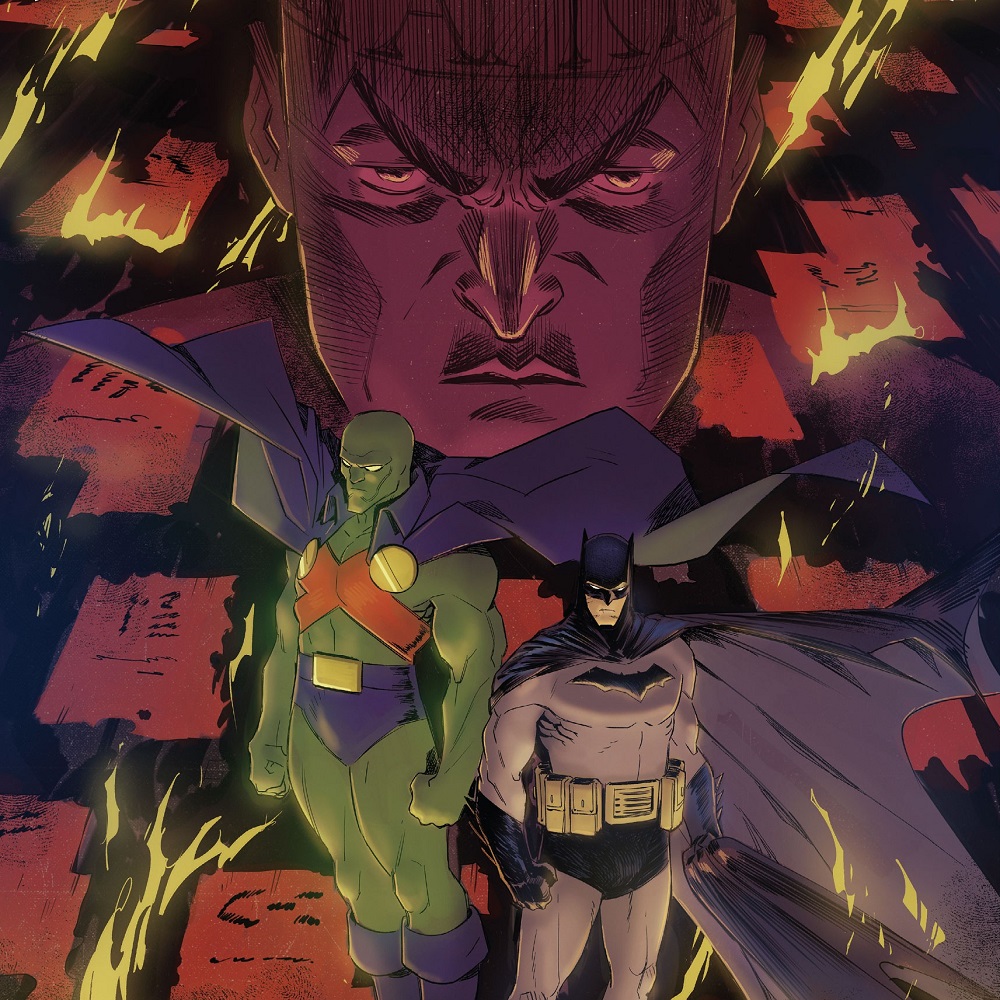 Overview: In Legends of the Dark Knight #5, Batman is dealing with an obsessed Calendar Man and teams up with Martian Manhunter to take him down!

Synopsis (spoilers ahead): As Legends of the Dark Knight #5 begins, a GCPD blimp descends upon an unsuspecting Gotham City, ablaze. Inside, Batman and three children are tied up. Batman soon releases everyone, and they leap from the blimp seconds before it explodes, each equipped with a Bat-glider. Safely on the ground, Batman looks towards the wreckage and recognizes within the fire the eleventh letter of the Martian alphabet. Perhaps not so coincidentally, each of the children reveals that today is their eleventh birthday.

In the Batcave, Batman and Alfred attempt to piece the case together, and soon after Bruce summons him, the Martian Manhunter teleports in.  J’onn J’onnz, however, is battling a shapeshifter who has the ability to cut off any telepathic communication. Soon enough, Batman is able to identify the alien and, with the help of Alfred and J’onn, secure the intruder. Almost without missing a beat, Batman returns to the case at hand. With J’onn’s knowledge, Bruce deduces that Julian Day, aka the Calendar Man, is staging a set of murders based on the Martian Calendar. What’s more, is that the ancient characters are imbued with dark magic.

Batman brings Martian Manhunter to another crime scene, the earliest of Day’s current murder spree, and soon J’onn finds another clue: the letter ‘J’ of the ancient Martian alphabet. Visiting the second of the three crime scenes, J’onn reveals a legend that if three increasingly horrific offerings are made on consecutive holidays, the person making the sacrifices would get an audience with a higher being of Martian lore at midnight.

Using deductive reasoning based on the chemicals in which the ropes had been doused, Batman narrows his search and finds the hideout of Calendar Man.

With less than a minute to spare, Batman and the Martian Manhunter descend upon Julian Day’s lair. Calendar Man’s henchmen do little to keep our heroes at bay, but by the time Batman reaches Day, the Calendar Man has already received some of the ancient Martian goddess’ gifts of shifting into a Martian.

As Day exposits on the meaning of today’s Martian holiday, and its dark ritual rumored to imbue it, Batman and J’onn telepathically deliberate on their next move Suddenly, Calendar Man is engulfed in flames.

In the aftermath, J’onn reveals to Bruce that Day’s ‘gifts’ will last for an entire year, on each of the Martian holidays, and that their partnership is far from over in the near future.

Analysis: The Consultant storyline found in Legends of the Dark Knight #5 brings together two of the most serious and focused members of the Justice League together: Batman and the Martian Manhunter. It’s a pretty straightforward story told in a Silver Age style, as we can tell through the fantastical plot points and as reflected through the art, which is wonderfully rendered in the pencils and colors of this style of storytelling that hearkens back to the stories of the 1950s and 1960s. The Silver Age style is pointed out pretty clearly in the issue as well when J’onn J’onnz (himself considered by some to be the first Silver Age superhero) refers to the language that Julian Day has adopted for his purposes as being of the Martian Silver Age. The artwork is fairly simplistic and mimics this style, as do some of the plot points and settings, such as the conservatory which serves as the Calendar Man’s ‘lair’.

The creatives of this issue, however, don’t fully play into the cheesiness that that period of time produced. While using the Calendar Man could open up a corny storyline, he is used here as cutting a pretty serious character, not taking the easy route of using silly holidays for ridiculous crimes. Rather, this story carries more of a Lovecraftian tone as an otherworldly god attempts to use Day as a tool for her own means. Batman also uses a more realistic approach in his sleuthing in following and then confronting Day.

The Martian Manhunter, the titular ‘Consultant’ of this issue, was used pretty much as simply that: someone for Bruce to consult with when there were cultural pieces missing. Both of these characters have been historically aloof when it comes to playing with others, and this shows nothing different. In the end, nothing has really changed between them, and I wish there had been some sort of intimate breakthrough, which would make the promise of them working together in the future something to look forward to.

Legends of the Dark Knight #5

This story seems to be told with a pretty specific group of people in mind, and while I can appreciate that for what it is, this just isn’t my personal cup of tea. This feels more like a slightly modernized episode of Super Friends than the tales we are now accustomed to, of the feeling of a lasting impact, which unfortunately can make this issue seem forgettable.