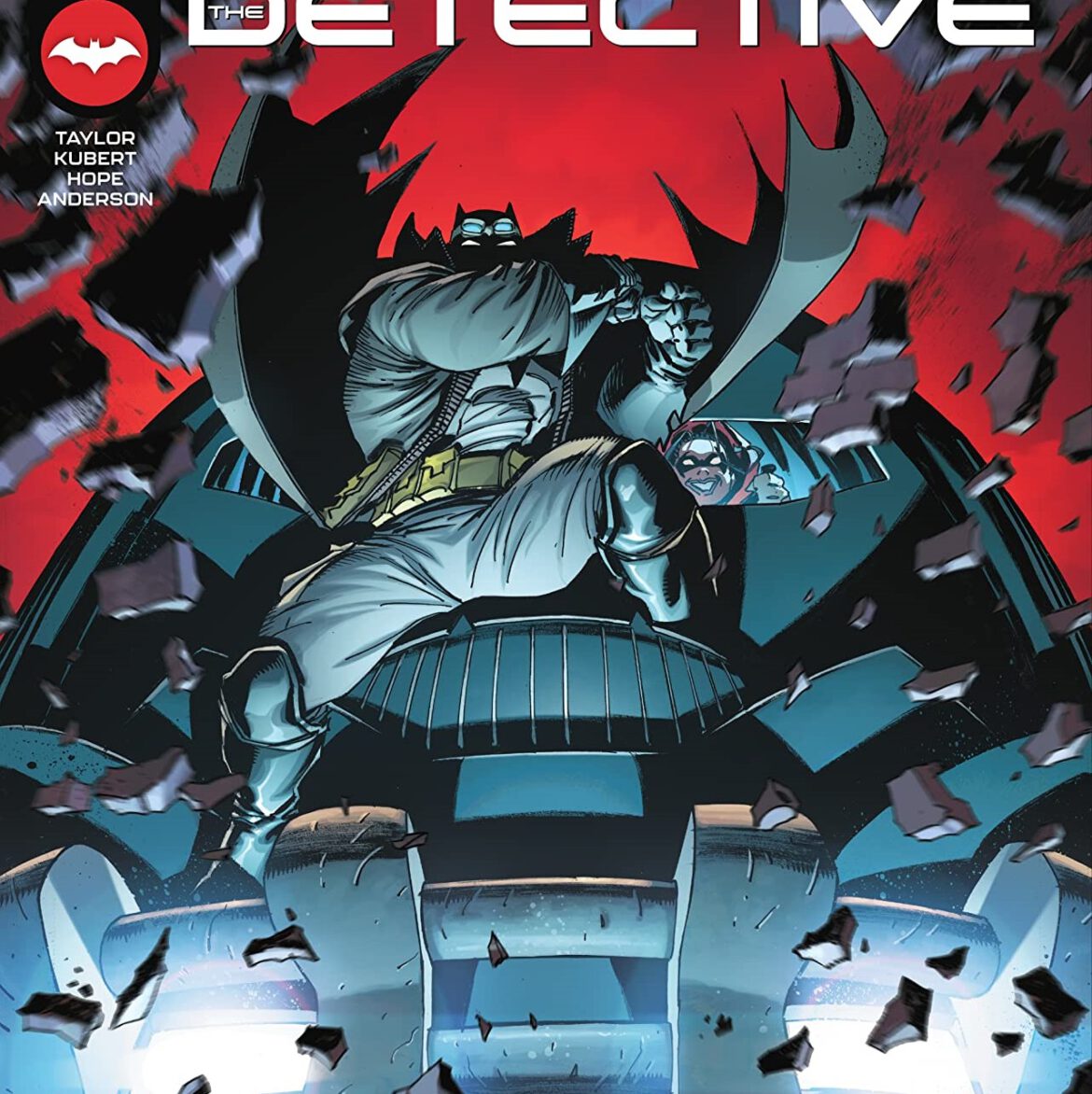 Overview: In Batman: The Detective #5, the Alliance of the Bat joins the case, as Batman learns who and why there is an Equilibrium.

Synopsis (spoilers ahead): As Batman: The Detective #5 begins, Batman gives his orders to the Alliance of the Bat.  They are to discover the identity of Equilibrium and bring her associates in for questioning. Batman also orders Henri Ducard to be relocated to a secure location for his recovery.  He also asks for no checkpoint stops between France and Belgium.

Batman tells Squire that the Alliance is a network of agency heads, police chiefs, diplomats, spies, and mercenaries.  He is able to order all of them because he has worked with each of them in the past and they know he can do things that they cannot.

One hour later, Batman gets word that Equilibrium and her men have invaded the Brussels Convention Center; the police have the place surrounded.  Everyone inside is on Batman’s list, meaning they were all saved by Batman. A negotiator will not help, she will not let anyone go so Batman has to go in.  He crashes into the building and engages the terrorists.  Meanwhile, Oracle lands the mobile cave into the building, and Squire uses the hostages inside while Batman distracts Equilibrium.  Equilibrium herself proves to be an avid fighter, even using some of Lady Shiva’s fighting style.

When all the hostages are on board, Batman orders Squire to close the doors and evacuate leaving him alone.  He orders tear gas to be released and Equilibrium escapes leaving one of her larger thugs to take out Batman.  Batman is not alone as Squire disobeys her orders and helps the Dark Knight.  Outside the terrorists are rounded up but Equilibrium is not among them.  Batman learns the Ducard was not in the hospital when the extraction was to take place.  He checked himself out and left a note for Batman without a mask to join him where they first met.

Bruce Wayne obliges the man and he and Squire meet up with Ducard.  Ducard relates that after Bruce left his care, he found another promising prospect, named Charlotte Le Serf and trained her.  She had a more killer instinct than Bruce but she decided to leave it all behind.  She decided to get married and start a family.  Ducard showed Bruce a photo of her family.  Ducard admits that she was close to him.  One day in Liverpool, Batman, Knight, and Squire fought a group of smugglers.  To create a distraction the smugglers rigged a building to explode leaving John Gallagher and a female smuggler.  The woman tried to save Gallagher but they were both trapped the three members of Batman Incorporated rescued the two.

A year ago the same John Gallagher had a few too many drinks and tried to drive home.  Instead, he crashed into Charlotte and her family killing her husband and son.  She reverted back to her training and killed Gallagher on the spot.  She discovered that Batman rescued Gallagher and if he hadn’t, she figured that her family would still be alive so she started on her quest to kill all of the people Batman saved.  She begins to see Batman as an agent of chaos and now she is going to kill a city.

Analysis: The art keeps its gritty crime style and I am thankful that the scenes involving Bruce Wayne out of costume are very limited here.  As I have noticed before, I do not appreciate how Wayne is portrayed but I do love the costume Batman wears throughout.  His trench coat and combat style dress complete with goggles while still maintaining the bat theme is striking.  I would like to see an action figure of this in the future.

I do like the contrast between Batman and Equilibrium and her terrorists.  The white versus black is striking and the opposite color pallet is interesting.  Equilibrium dressed as an all-white Batman in contrast to the Dark Knight is striking.  It gives the reader the idea that Equilibrium truly believes herself to be the righteous one in this conflict.  She believes that what she is doing is right for order.  After hearing Ducard’s account of Charlotte in Batman: The Detective #5, it is hard to argue that she has a point even though it is a selfish point.  She decides for herself that Gallagher should have died in that explosion and she does not accept that maybe her family was supposed to die in the car crash.  It is definitely a thought-provoking justification for her actions that is unique.  She is not after money or power but she thinks she is looking to set things right, which may be hard to defeat.

This story really provides a likable villain in Equilibrium and just as I would like to see a Batman figure, I would like to see a figure of her in the future.  She truly is a unique antagonist and it is difficult to use the term villain to describe her because even though she is willing to kill, she cannot be looked at a solely evil. Overall, the story is great but the art is not my favorite aspect about this series.