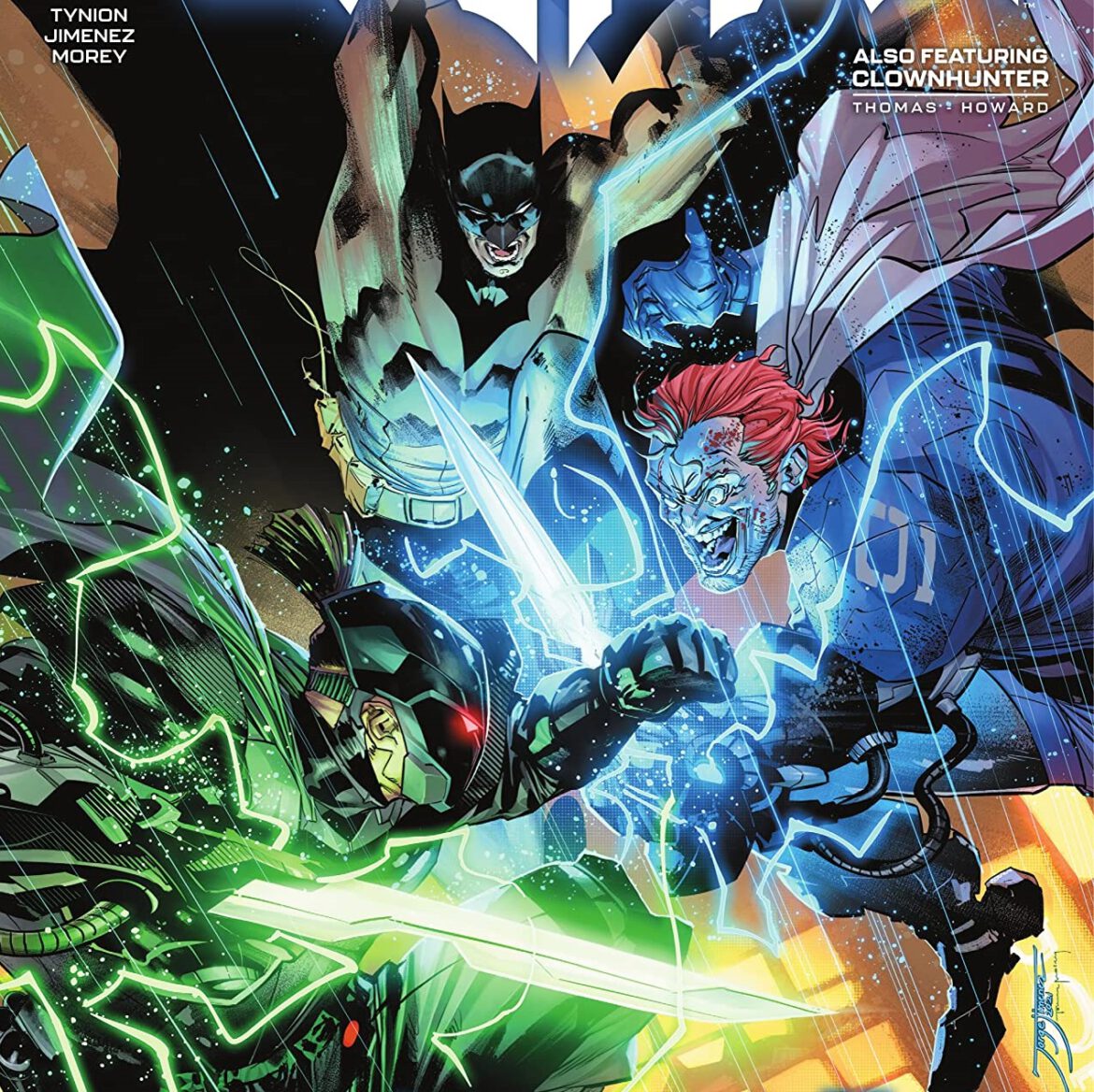 Overview: In Batman #114, Peacekeeper-01 and Peacekeeper-X duel to the death which prompts Batman to intervene, but is he too late?

Synopsis: Batman #114 begins down in Eden, Poison Ivy’s subterranean lair, Miracle Molly tinkers with some technology while she listens to the “Anti-Oracle” spread messages of fear. Molly barks in frustration, which catches Queen Ivy’s attention. Ivy sees that Molly is also mad at the people of Gotham, too.

Molly clarifies that she’s mad at the systems in place that manipulate the citizens of Gotham. She’s mad at the parrots in the media, at Mayor Nakano and Simon Saint. Ivy notes that Molly brought technology into her garden. Molly apologizes, explaining that she needs something to tinker with. Plus, her drones could come in handy.

After explaining to Ivy about what the Unsanity Collective is, she also tells Queen Ivy that without the emotional baggage, Ivy could be one of the greatest heroes. Ivy tells Molly that her emotional baggage is what gave her the tools to survive, though she notes that Molly has an interesting and optimistic perspective. As the two continue to talk, Molly realizes what Scarecrow’s plan is. Scarecrow’s going to use the mind machine built by Master Wyze on the entire city.

On the ground, Peacekeeper-X tries to talk some sense into Sean, offering to help his fellow Magistrate colleague first. Perched above, Scarecrow listens in, and he uses his mind control to distort what Sean sees. To Sean, Peacekeeper-X appears as a monster. Scarecrow then tells Sean that he’s going to need to kill Batman in order to save Gotham.

Sean breaks the sedative in Peacekeeper-X’s hand, then blocks a salvo of bullets from the other peacekeepers around them. He disposes of the small army, moving in on Peacekeeper-X last. They tussle, and Sean gets the upper hand. He flees.

Before Peacekeeper-X can pursue, Batman intervenes and sends Peacekeeper-X to the ground. Saint unleashes his full arsenal, and Batman is the one surrounded now.

Peacekeeper-01 books it into a building for cover, with Scarecrow taunting him all the way. While Batman is busy with Magistrate soldiers and drones, Peacekeeper-X tracks down Sean. Once again, Peacekeeper-X tries to talk sense into his fellow peacekeeper. This time, Sean responds with some grenades, which forces Peacekeeper-X to use heavy artillery that rips a hole through the building.

The two peacekeepers continue to spar, with Scarecrow egging Sean on. Scarecrow finally pushes Sean to do what he must, and Sean beats Peacekeeper-X to death. Simon Saint, beside himself, can’t allow any of his technology to fall into Batman’s hands now that X is gone. He orders that all of his drones and tech, including Peacekeeper-X’s suit, self-destruct.

As Batman escapes a huge explosion in Gotham City, he is greeted by Miracle Molly. She knows exactly what Scarecrow is going to do, and she offers to help Batman stop him.

Analysis: Writer James Tynion and artist Jorge Jimenez’s big “Fear State” event kicks it into high gear with an action-packed issue in Batman #114. Before the action set-piece that makes up the whole of this issue, Miracle Molly and Poison Ivy discuss Molly’s feelings of anger toward Gotham, which Molly clarifies is aimed solely at the instruments and institutions of oppression above. As the two chat, there’s a clear sense that Molly and Ivy are similar in many ways, but there’s a divide that makes Molly more of a hero and Ivy more of a villain. It’s age and their generational divide, which is an interesting theme that Tynion is leaning into this issue.

Because Molly is younger, she’s less jaded from the world around her. Unlike Ivy, she hasn’t lived long enough for the woes and traumas of the world to take her to a point of no return. What trauma Molly did carry (see the excellent Batman: Secret Files: Miracle Molly #1) was erased from her memory by Master Wyze and the Unsanity Collective. She’s free, and in being free, Molly is able to see the institutional problems and isolate them from ordinary Gotham citizens. Her anger, like her machines, is more fine-tuned. It’s an interesting theme, one that definitely resonates with the real-world idealism we see on the news and online, particularly in many of the protests over the summer of 2020. Tethered to this idea is this concept of a Fear State, which also relates to the frenzied fear that played out in the media during the same timeframe. With this event, Tynion has clearly tapped into both the paralyzing fear and the fight for justice, both of which were at the front and center of a politically charged 2020. Tynion hasn’t spoken to these ideas too much in this event so far, but he is laying the groundwork for a beacon of hope in Miracle Molly’s optimistic approach to society — that we too can shed our trauma and build something better.

The rest of Batman #114 is devoted to the showdown between Peacekeeper-X and Peacekeeper-01. It’s explosive, colorful, and mostly delivers on what the last few issues have been teasing. Tynion’s love of anime shines through in this fight. There’s both a strong penchant for violence and silliness to the fight. Peacekeeper-X orders his “light cannon” to charge up to 100%, and Peacekeeper-01’s “superheated” arm blade tears through Magistrate soldiers and drones like they are nothing. The silliness of the nigh-invincible weaponry and armor zaps some of the tension of the battle, but near the end, Peacekeeper-01 overcomes his opponent and severs X’s arm. Then, Sean beats X to death in a way that’s both traumatic and tragic.

Simon Saint, who has been all over the emotional spectrum in this issue, orders all of his field units to self-destruct. The reasoning is so Batman won’t have access to any Magistrate tech, but it’s strange that a figure like Saint, who has been reiterating his desire to restore order and save Gotham ad nauseum, can so easily destroy several city blocks. One hopes that Saint winds up in Arkham Asylum after this arc, so he can get the much-needed mental help that he so clearly needs.

The art, as ever, is incredible. It’s awe-inspiring, towering, and even gruesome near the end of the big battle. Jimenez really knows how to panel a fight well, and because of his skill, there are plenty of big moments that really shine through. While the reader focus of this issue will assuredly be on the battle, it shouldn’t be understated as to how beautiful Jimenez’s Queen Ivy design is.

The whole Eden section of Batman #114, to that end, is absolutely stunning. Tomeu Morey’s colors really make Eden feel magical, faraway, and vibrant, and it’s arguably my favorite part of this issue.

Synopsis: The backup for Batman #114 sees Clownhunter battle against the Joker monster seen in the last few issues. As he overtakes the monster, two voices call out to him to grab their hand. One of the voices is an unknown, but the other is Scarecrow, trying to lure Clownhunter into a deeper state of fear. Scarecrow then taunts Clownhunter.

Clownhunter keeps up the fight but is knocked off a rooftop once more. At first, he’s persistent in his desire to be alone as he falls. Suddenly, he wakes up and realizes that he’s been so wrong to go alone and reaches out with his hand. Tim Drake catches Clownhunter, saving him from hitting the pavement.

Analysis: It took three backstories of Clownhunter battling Joker monsters in a dream world for him to finally realize that he needs to reach out and take the hand of the Bat-Family — literally! The ending of this backstory feels trite for how long readers had to wait for it to wrap up, but the punk-inspired art from Jason Howard helps soften the rough landing. There was potential here, especially with the art, but this space at the end of the last three issues could have been used so much more efficiently.

Batman #114 is an explosion of color as Peacekeeper-X and Peacekeeper-01 duke it out. There’s a sense of heart running through this arc in the scenes between Miracle Molly and Poison Ivy, which makes this issue an improvement on earlier Fear State issues.