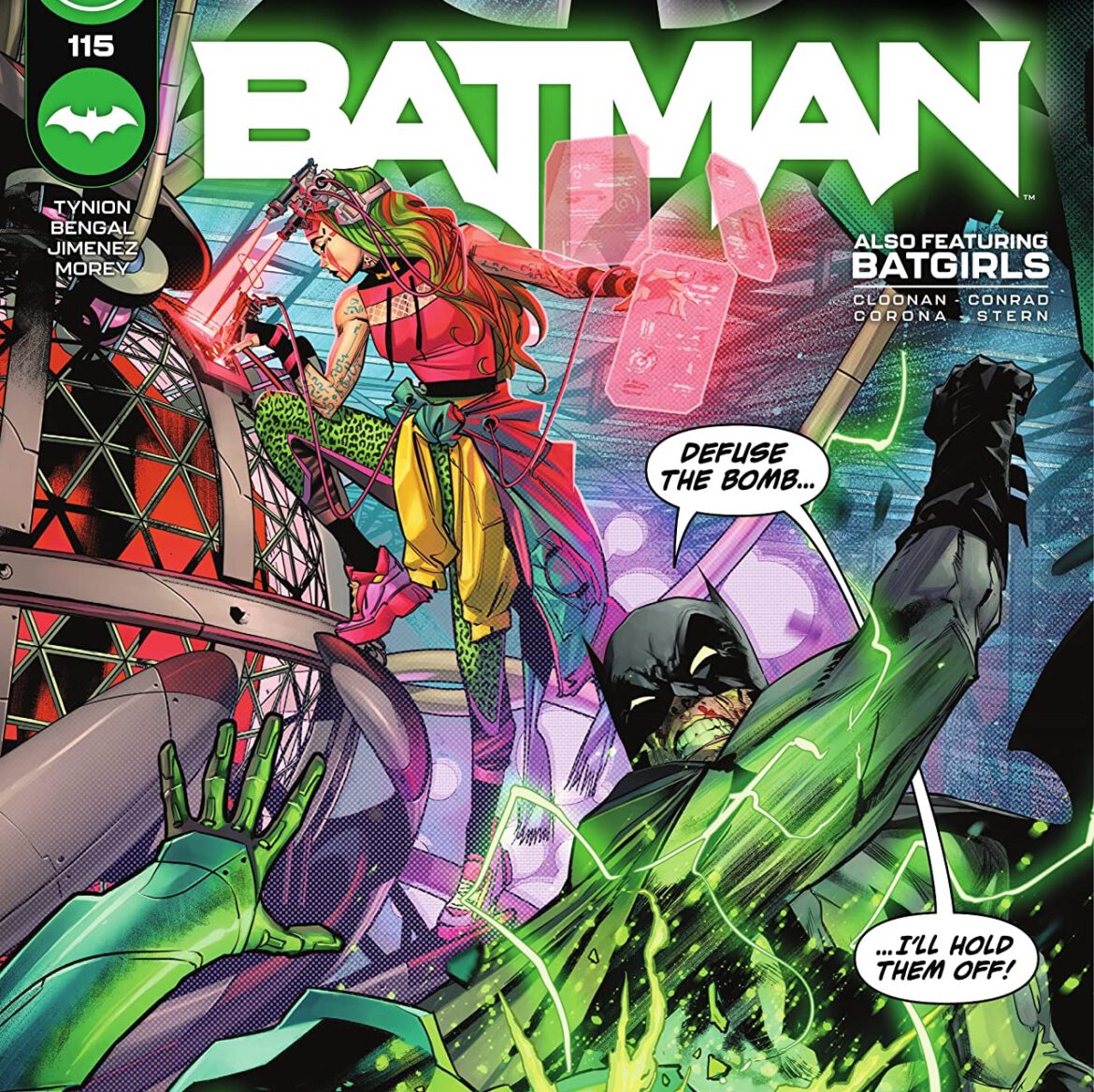 Overview: In Batman #115, Scarecrow prepares to test out his next phase in bringing about a Fear State on his new willing instrument, Peacekeeper-01.

Synopsis: Batman #115 begins aboard the Magistrate Skybase, as Simon Saint is having a mental breakdown after having to destroy his drones and the remains of his partner, Peacekeeper-X, from the last issue. Amidst all of this, he’s informed that Poison Ivy has roots and growth beneath all of Gotham City and that she could level it at a moment’s notice. Saint comes up with a plan after hearing this, ordering all forces, peacekeepers, and drones to converge on his mark.

In Eden, beneath Gotham, Poison Ivy helps Master Wyze ease the pain of an Unsanity Collective member. Wyze tells her that they’ve met before, that long ago, he worked alongside a young Jervis Tetch. Wyze was the Dormouse to Jervis’ Mad Hatter. He also tells Ivy that she could use her powers to help a lot of people if she wanted to, that he sees something deep within her.

In the sewers, Sean Mahoney, Peacekeeper-01, argues with the voice in his head. It’s the Scarecrow, and on some level, Sean knows Scarecrow is a villain. However, Scarecrow tries to convince Sean that he’s merely a doctor and that Peacekeeper-01 is an instrument to save Gotham.

In Gotham, Miracle Molly and Batman head to the Unsanity Collective’s base. Deep within the base, hidden from the Magistrate, housed the mind machine that Master Wyze used to remove people’s trauma. Molly tells Batman that the machine also stores those memories it takes away and that she surmised that Scarecrow would use it to create some kind of trauma bomb.

As Molly leads Batman to the machine, they are attacked by Breaker, who is under the control of Scarecrow. Molly and Batman disarm Breaker and free him from his mental constraints. Unfortunately, Scarecrow has taken the mind machine. Molly gets to work on creating something that could find it.

In Scarecrow’s base, Dr. Jonathan Crane convinces Sean to lie down on a table. Crane is going to use the mind machine on Sean, and afterward, they’re going to use it on Gotham together.

Meanwhile, Ivy senses something in Eden. In walks, Saint’s Magistrate forces, and their orders are to kill Poison Ivy.

Analysis: Now that we’re several issues into DC’s big “Fear State,” event, Batman #115 finally gets to the root of the plot. Behind all of the explosions, Magistrate drones, frantic Simon Saint rants, and babblings of Peacekeeper-01, we’re shown a less-than-grandiose Scarecrow plot. At the heart of this story where all of Gotham’s fear buttons have been pushed, where the media was used as an accomplice to scare the populace and set the stage for Scarecrow to do something, we’re offered up a “trauma bomb.”

Despite Miracle Molly trying to explain what it is, there’s no clear grasp on what a “trauma bomb” is or how it will affect Gotham’s citizens. According to Scarecrow, it’ll “evolve” them somehow, but what that means is anyone’s guess. Readers will get some kind of indication as to what this all means in the next issue when Scarecrow blasts Peacekeeper-01 with a trauma bomb as a test for what’s to come later.

Overall, it feels like writer James Tynion wanted to create something big, bold, bombastic, and high-concept for his final arc on Batman, but there isn’t enough plot to bring this story up a scale befitting an event-sized story. At the end of the day, Scarecrow steals a mind machine belonging to the Unsanity Collective, and he’s set his sights on Peacekeeper-01 as his grand instrument for altering all of Gotham. The Magistrate, the rest of the Unsanity Collective, the media, and Mayor Nakano’s anti-mask mandate all seem like unnecessary padding. Scarecrow went to such great lengths, presumably, to set up this grand toybox, but he needed very few actual toys to accomplish what he’s aiming for. Prior to Fear State, Scarecrow even had Batman captive and was tinkering within Bruce’s mind. In the span of an issue or two, Bruce escaped and was easily cured by Ghost-Maker (who, once again, has disappeared).

This arc comes across as pressure from DC for an event-sized story without there being much of an idea for one. It’s big for the sake of being big, and as we trudge along to the heart of this story, it turns out much of the action and exposition leading into “Fear State” is nothing but hot air as it is shown in Batman #115.

The art from Jorge Jimenez, however, has been consistently amazing. His work is among the best at DC right now, and he has an eye for creatively paneling out action sequences and revelatory moments in ways that help bring some pomp and circumstance to this story. It’s not enough to save the narrative completely, but it’s an admirable effort.

Bengal helps out with art duties in this issue. Bengal’s panels feel a little bit cartoony compared to Jimenez, but these panels also feel oddly fitting for the story at hand.

Synopsis: While Batgirl (Cassandra Cain) is out knocking out Magistrate soldiers, her communication link with Oracle is cut. Oracle sends Stephanie Brown out for backup. Just as Steph meets up with Cass, a new voice cuts over the frequency and taunts them.

Back at the Clocktower, Oracle is having her own troubles with the network. This same hacker, who goes by the name of Seer, informs Oracle that she and her Batgirls have eaten well for too long. Seer is going to take them all down.

Analysis: The art in the story is fun, albeit a little goofy, and the colors are absolutely gorgeous! On the surface, this backup story in Batman #115 is such a fun piece to look at. Storywise, it’s hard to gauge either way how this one will go. We do get a clear sense of direction, which is great.

Stephanie Brown and Cassandra Cain are out in the field, trying to stay alive during a Magistrate onslaught. Barbara Gordon is back at the Clocktower, and both parties are under threat of some new, unknown hacker by the name of Seer. Seer seems to have a personal vendetta against the Batgirls, but we don’t know why just yet. One can assume that in the next two installments, we’ll find out the why, as well as who this Seer might actually be. Until then, we’ll have to wait. At least we know what we can expect (presumably).

Batman #115 further expands upon the Scarecrow plot at the heart of Fear State, and it feels far smaller than the grandiose promises of an event book. It’s not necessarily bad, but it’s far from what this event was advertised as.