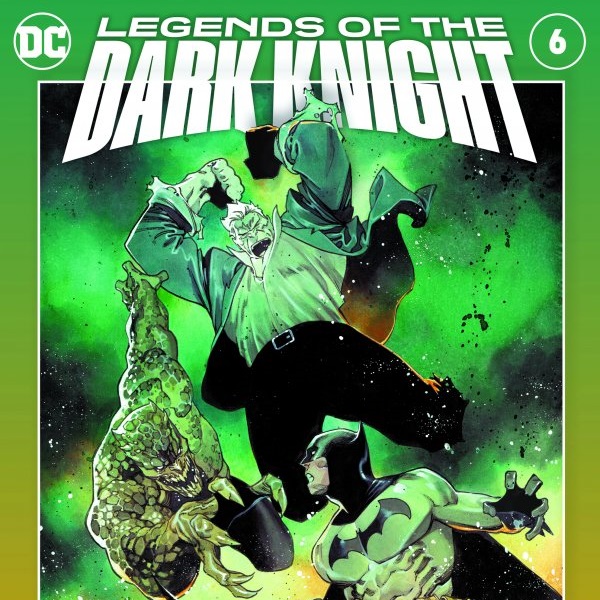 Overview: In Legends of the Dark Knight #6, two standalone tales are told in this issue featuring two of Batman’s largest villains! First up, a murderer wreaks havoc on the mob families of the Gotham underground, and Solomon Grundy knows who it is. Later, in the aftermath of a hurricane, Batman teams up with Killer Croc to take on some opportunists who seek to cash out amidst the chaos.

Synopsis (spoilers ahead): The first story in Legends of the Dark Knight #6 Batman investigates a series of murders on organized crime families that have happened over the previous month, deducing the killer to be Solomon Grundy. His theory is confirmed when his stakeout results in an attack by the undead monstrosity. Batman helps Solomon take down the two goons before trying to talk it out with him. Grundy doesn’t stick around, however; after informing Batman that he doesn’t have a choice but to hurt his prey, he escapes into the sewers. Batman is quick to tail him and soon confronts him. Solomon Grundy, despite what Batman just witnessed, tells the Dark Knight that he didn’t kill anyone; that it was the Bad Man that follows him everywhere. Batman pursues Grundy back to Solomon’s home in Slaughter Swamp, which is strewn about with broken reflective surfaces hanging from its trees. Grundy says they’ve been placed there to confuse his Bad Man, Cyrus Gold, who had inhabited Grundy’s body over a century ago. Now, his body is a battlefield for the tug of war between the two consciences. While Grundy wants to live in what peace he is able to scrounge up, Gold wants only revenge for his death and is taking it out on the crime families in lieu of his murderers one hundred years ago.

After Batman brings Solomon back to the forefront, he leaves the reanimated being to struggle alone, unsure of another way to help the creature. Alfred encourages him, telling him that sometimes knowing when to leave is as important as sticking around.

Analysis: “The Curse of Slaughter Swamp” offers a peek into a deeper side of Solomon Grundy while adding a bit more intricacy to the rogue’s status quo, having him exhibit more than just the usual belligerent rage that he’s commonly written to envelop. Cyrus Gold’s still-lingering ghost grants Grundy’s character a sympathy needed for us to care for the creature, and the parallels between Grundy and Two-Face make a nice foil that can further elevate Solomon if used correctly. Whereas Harvey Dent battles his alter ego head-on, giving his body 50/50 to his darker side, the essence of what separates Grundy from Gold knows his weakness and instead chooses to try to ‘confuse’ his Bad Man by surrounding himself with jagged reflections with smoke and literal mirrors. Grundy, then, isn’t battling the release of his deeper, violent desires as Dent does but is hiding from an actual separate entity altogether that crawls around his own skin.

Synopsis (spoilers ahead): The second story in Legends of the Dark Knight #6 picks up shortly after a devastating hurricane in Gotham City, as a man is rescued by Batman. The force of the tides have caused him to lose his three-year-old son in the resulting flood, and he begs for help. It isn’t long before the Batman resurfaces, child safe in his bosom. Returning the boy, the Dark Knight sets out to find the party responsible for destroying the floodwalls. Soon he casts a line and fishes up Killer Croc. Waylon Jones proclaims his innocence, saying that he was also flooded out. Croc did see the men who broke the walls and was attacked by them. He escaped to look for Batman, and the two set off to where the perps went.

The gang had broken into the Von Lessik building, which serves as home to the Gotham Stock Exchange and began to work on taking advantage of the manifold distractions to loot it. Batman and Croc work together to enter the building and confront them. They quickly dispatch the gang, but Batman doesn’t approve of Jones’ disregard of public property, having destroyed millions of dollars in stocks and structure in the skirmish. Croc returns to his home without a care, asking Batman to keep his own disregard away from Croc’s property.

Analysis: “A Hard Rain’s A-Gonna Fall” is a bit more of a straightforward story about an incidental and somewhat-reluctant team-up but is also not without its own messaging; this time about class. On a fairly regular basis, Batman and the criminal element cause incredible damage to the infrastructure and morale of Gotham City, often leaving the detritus of their battles wherever they may happen to land, including the one place Waylon Jones seeks peace: his home in the sewers. He finds it here because this is where no one really bothers him; where all the filth and debris of the city above end up. But Jones, just like anyone else, carves out his own little piece of what paradise he can take down below, and far too often even this wasteland is beset upon by the unwelcomed. Yet Batman berates him for destroying the digital millions tied up in the servers of the Stock Exchange, which of course means nothing at all to Killer Croc and who, in fact, seems to merely shrug his shoulders at the collateral damage done in his efforts for vengeance at those who washed him out of his own front door. There are priorities, and his own home is held far higher than someone else’s financial risks.

Both stories end with a tag dealing with Batman’s inactions. Batman leaves Solomon Grundy to his own self-torture in Slaughter Swamp, and this decision bothers him for some time afterward, leaving him to wonder if there was anything he could have done to help the poor creature, with Alfred telling Bruce (and the reader) that sometimes you are powerless to help in situations where there is simply no other alternative. However, in the Croc story, Waylon returns to the wreckage of his home alone, asking that Batman keep his horse-playing away from him. In response, Batman (and the reader) look the other way, with Batman saying only ‘I’ll try,’ seemingly signaling that there is little he could do for the inevitable.

Editor’s Note: This issue collects two digital-first chapters of the series. You can find the chapters of the comic digitally and help support TBU in the process by purchasing this issue for Comixology through Amazon.

Legends of the Dark Knight #6

These two legends are short, tight, and showcase neat, street-level storytelling with art, heart, and thought that highlight, not just two different villains, but also the subtle fallibility of Batman and the rest of the cast of Gotham City can fall into.