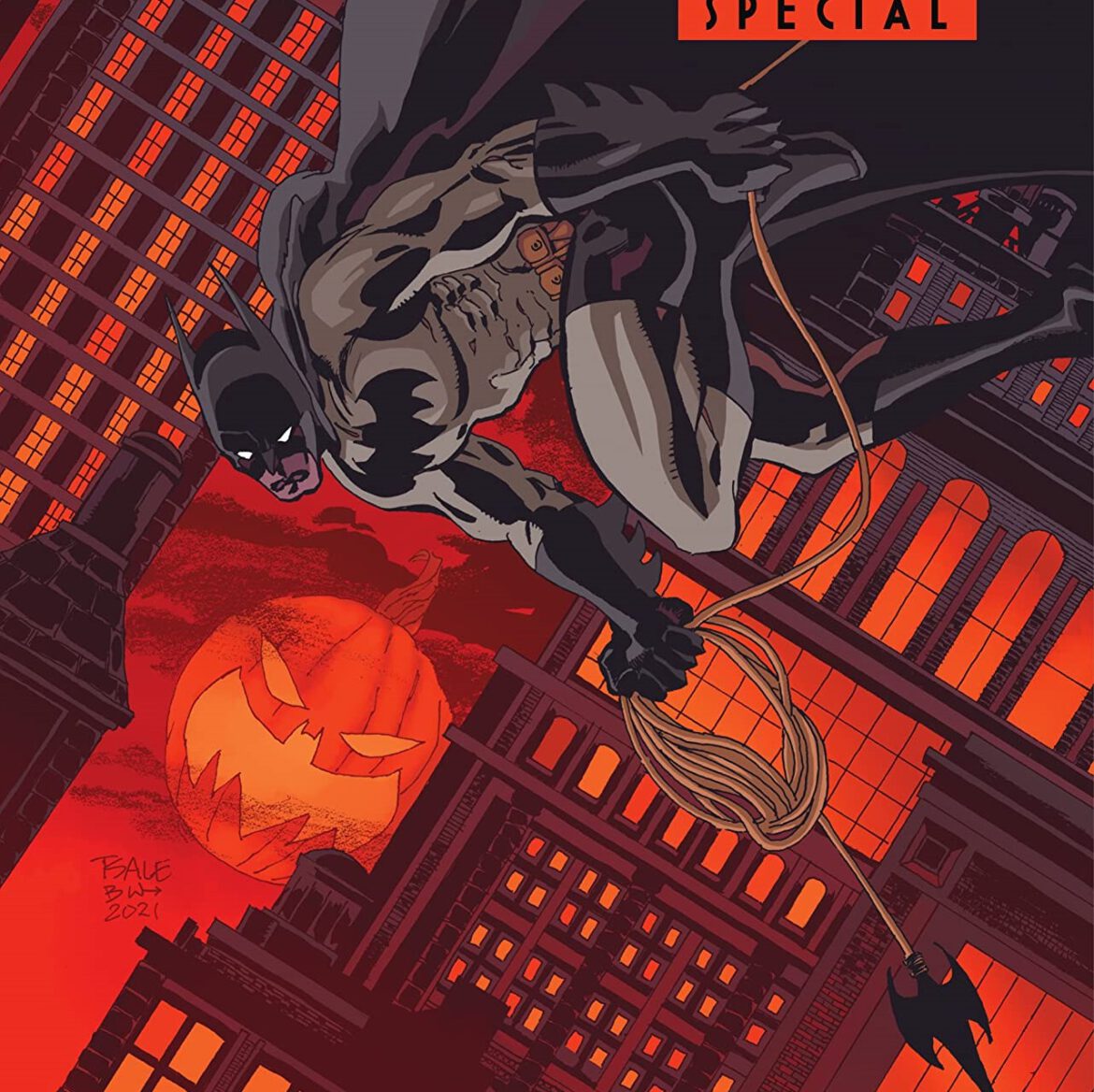 Overview: In Batman: The Long Halloween Special #1, the Calendar Man tries to reclaim his identity as the true, calendar-themed supervillain in Gotham City.

Synopsis (spoilers ahead): Batman: The Long Halloween Special #1 begins three weeks before Halloween at the Squire Institute for the Criminally Insane in Nantucket, Massachusetts, as a woman escapes from her cell, which is littered with Two-Face headlines.

Two weeks before Halloween, a gang of henchmen working for Calendar Man are robbing Wilson’s Jewelry. Batman arrives and takes them down, asking them where Calendar Man is hiding.

Atop the GCPD, Batman meets with Commissioner Gordon. Batman tells Gordon that Calendar Man’s henchmen will make bail, and Batman will follow them to Julian Day’s hideout. He tells Gordon that ever since the Holiday Killer, Julian Day has been haunted by this idea that he will be forgotten.

Gordon tells Batman that every Halloween he worries about a new killer arising. He notes that it all started up here on the rooftop of the GCPD, emphasizing how much he misses Harvey Dent. Batman doesn’t miss Dent, pointing out that they never really knew him. Dent could have been a lunatic all along.

Gordon then asks Batman if Robin could go trick or treating with his niece, Barbara. Batman disappears before Gordon gets an answer.

One week before Halloween, Gilda Dent finds Solomon Grundy guarding Two-Face’s sewer hideout. Gilda and Two-Face reunite. When Two-Face tells her that he’s hideous, Gilda responds that all she sees is her Apollo.

In the Batcave, Alfred tells Batman that his Calendar Man casework might be better worked on with a partner. Robin watches from afar, with Batman expressing how he feels that Robin isn’t ready yet.

In Park Row, Calendar Man’s henchmen stand at attention in a church. Julian Day is at the altar, and he descends to root out the two traitors who were captured by Batman, shooting them at point-blank range.

On Halloween, Harvey and Gilda Dent have dinner together in their old house. Harvey purchased it again while Gilda was away. The doorbell rings. Gilda assumes it’s just trick-or-treaters, but she is surprised to find Julian Day at the door. The Calendar Man and his henchmen knock out Gilda, then enter the Dents’ household.

At Gordon’s home, Jim leaves to go trick-or-treating with his niece, Barbara Gordon. Once he leaves, he finds Batman and Robin outside of his home. Barbara is dressed as Batgirl, and she quickly joins Robin. Batman tells Gordon that he’s arrived, as they discussed.

Atop the GCPD, Two-Face has broken the Batsignal in half and turned it on, so only one side of the signal shows. When Batman arrives, Two-Face informs the Caped Crusader that Julian Day has abducted Gilda. Day will release Gilda only if Two-Face joins his Calendar Men. Batman believes Day wants more than Two-Face’s partnership, and he tells Harvey to spill the details if Harvey ever wants Batman to trust him again.

While out getting candy with Barbara, Robin sees the signal in the sky and disappears.

At Calendar Man’s Park Row church, Julian Day sits with Gilda in a confession booth. He asks her why she stole his identity and why she chose to become the Holiday Killer. Before she can answer, Two-Face breaks in, dressed as one of the Calendar Men. Julian Day tells Two-Face that he’ll release Gilda if Two-Face does something for him.

At the Gotham Museum, Julian Day and Two-Face, along with some of the Calender Men, break in and attempt to steal a rare birthstone that’s currently on loan. Before they can steal it, Robin nabs it first. Then Two-Face pulls off his mask to reveal that he’s Batman in disguise.

At the Park Row church, the real Two-Face breaks in with Solomon Grundy. The two of them take down any remaining Calendar Men, then free Gilda Dent. There’s a bomb, however, and Grundy grabs it, leaping to his death in order for Harvey and Gilda to survive.

At the Gotham Museum, Batman beats down Julian Day, who tries to justify his actions by telling the Dynamic Duo that he was an orphan who came from nothing.

At the GCPD, Batman tells Gordon what happened. The two surmise that Julian Day really wanted to steal the diamond and kill the Dents, thus making an even bigger name for himself. Before the heroes leave, Robin apologizes for bailing on Barbara.

In the sewers, Harvey and Gilda Dent row a boat away from their old hideout. They’re together again, “now and forever,” notes Gilda.

Batman tells Gordon that the Dents have disappeared. Gordon asks Batman why he decided to trust Harvey, to which Batman responds that Julian Day was the bigger threat at the moment. Gordon believes that Gilda could be a good influence on Harvey and bring him back to them. Batman feels different, implying that she’s just as crazy as Two-Face.

Tim Sale’s art and paneling hasn’t changed a bit, which makes this one-shot fit right in with the Long Halloween universe. If you’re a fan of that Sale look, this short story feels right, which arguably might be the most important factor when considering whether or not to buy this book.

Storywise, Batman: The Long Halloween Special #1 doesn’t add too much new to the world Sale and Loeb created. Most of the story revolves around an incensed Julian Day battling to reclaim his stolen identity as Gotham’s true calendar-themed villain. It’s gimmicky and silly, with Day now running an entire organization of devoted acolytes to commit petty thefts in his name.

The story gets heated when Gilda Dent, who has seemingly escaped from an asylum and returned to reunite with Harvey, is abducted by Day. She’s less of a character and more of a plot point in this follow-up, motivating Harvey to team up with Batman in order to stop Day. The plot isn’t as thoughtful as The Long Halloween or Dark Victory, and the character motivations are sketchy at best. Characters seem to act a certain way because the plot demands it, which is definitely the weakest issue with this one-shot and makes it feel more like a cash-in than anything fresh or groundbreaking in this universe.

This isn’t to say Batman: The Long Halloween Special #1 is necessarily bad or not worth anyone’s time. While it suffers from weak plotting, the art is wonderfully moody and reminiscent of the series from which it borrows its name. Fans, more likely than not, will enjoy this follow-up if they’ve been missing the art and atmosphere of The Long Halloween. In that vein, it’s purely a nostalgia trip that offers nothing new to the world Loeb and Sale created.

Batman: The Long Halloween Special #1 is a follow-up that serves more as a reminder as to why The Long Halloween was great than anything fresh or necessary. It’s a beautiful walk down memory lane, but it’s definitely not a must-read.