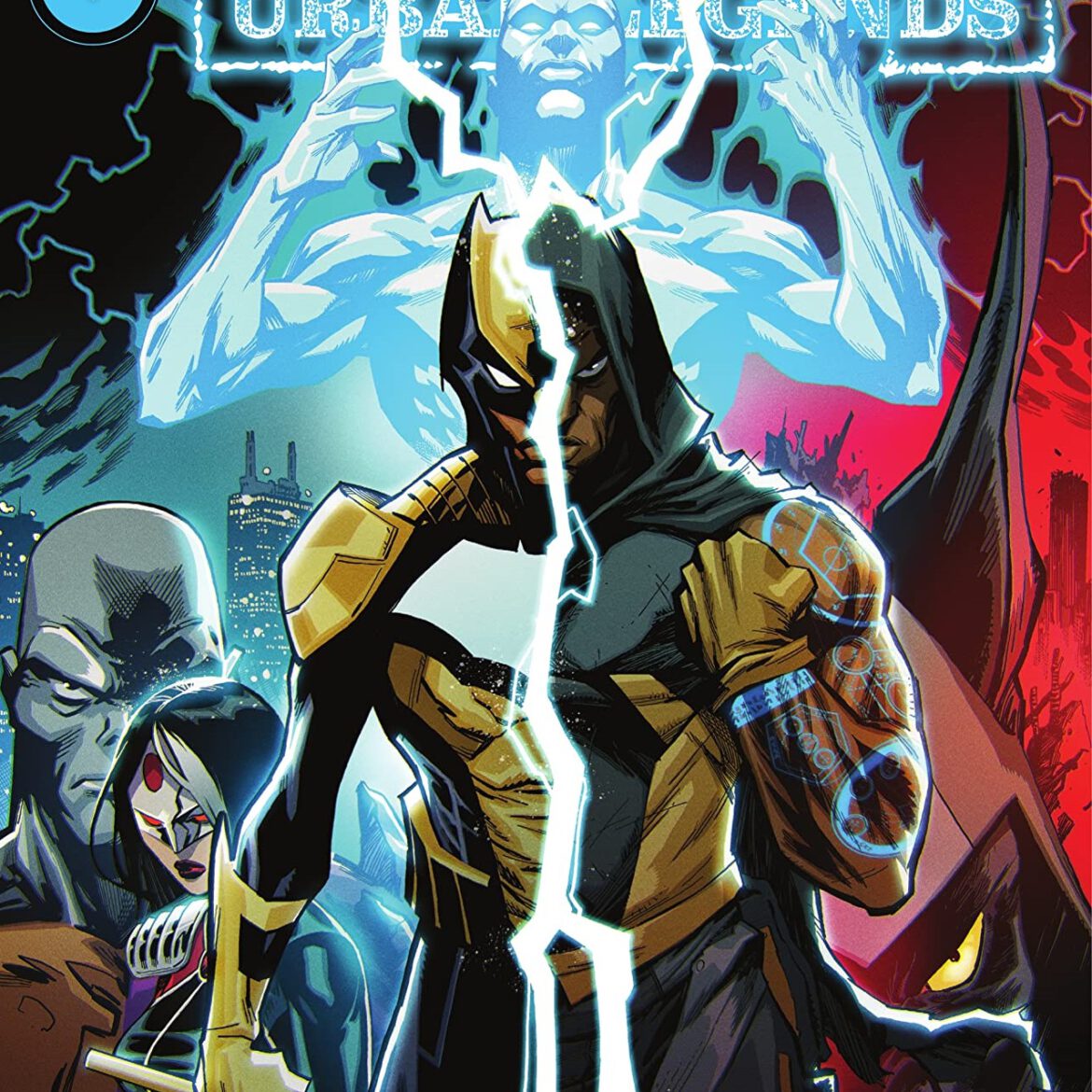 Overview: In Batman: Urban Legends #9, Batwoman and Red Alice battle the Magistrate, the Outsiders have their showdown with the Fearful, and Azrael investigates the death of Bullet-Tooth.

Synopsis: As Batman: Urban Legends #9 begins, there is a flashback to Kate and Beth playing a dress-up game called “Through the Looking-Glass” as young children. Flash forward to Beth as Red Alice striding into a church filled with followers of the Religion of Crime. The ringleader, upfront, is unimpressed and orders her to be taken as a false prophet. Red Alice easily disposes of her assailants and the ringleader. Batwoman radios from outside the church, advising her to be careful.

Flashback only a few hours, as Kate and Beth are preparing themselves, and Kate is worried that asking Beth to cosplay Red Alice is too risky. Beth reassures Kate, and flashes forward to the church, where Red Alice instructs the Religion of Crime followers to seek out the “anti-Oracle.” It is too late, as an avatar of anti-Oracle (who we know from other Fear State comics is named “Seer”) appears behind Red Alice and mocks her for cosplaying Beth, Red Alice, or both. She then calls in Peacekeepers, and the Religion of Crime betrays Red Alice in favor of a deal with the Magistrate.

Anti-Oracle mocks Red Alice for having no allies, and Batwoman bursts in to contravene. They begin fighting the Peacekeepers, and Batwoman admonishes Red Alice, telling her that she does not have to kill. Red Alice teeters on the edge of losing herself and struggles alone for a few moments to recover Beth. She finds and accepts her loneliness and pain and emerges as Beth. They dispatch the remaining Peacekeepers and turn their attention to Anti-Oracle, realizing, as the virtual background flickers, that she is in Simon Saint’s office on the Magistrate Airship. Batwoman and Red Alice comm Nightwing and inform him but decline the offer to join in the assault. The story ends with Kate and Beth having tea at home and Beth explaining that she is both Alice and Beth, all at the same time.

Analysis: This arc is arguably my favorite in the book thus far. Two issues is the perfect length, as many of the stories in Urban Legends have simply dragged on (the five-part Grifter series especially). Writer Alyssa Wong handles Red Alice’s return deftly without glossing over the horrors she has wrought or the dangers involved in cosplaying the character for the Bat-Family (a narrative that itself mirrors the current arc in Harley Quinn).

I appreciate how what seems like a Batwoman story actually becomes a Beth/Alice story but without undermining Batwoman’s presence and vitality. The narrative is tight, the dialogue is well-constructed, and even the emotional resonance is pitched nicely. While the “monster within” is hardly a new motif in TBU, Beth/Alice is unexplored enough as a character to pull it off. Georgiev’s realism marries well with the lush red tones from colorist Rain Beredo.

All in all, I loved this story. I’m personally quite interested in both Kate Kane’s Batwoman and the Red Alice/Beth narrative, so this story would appeal to me, but I think the creative team executes it well and for once the story is no longer than it needs to be.

Story #2: Tweedledee and Tweedledum in “Down the Rabbit Hole” Part 1 by writer Sam Johns and artist Karl Mostert

Synopsis: The next story in Batman: Urban Legends #9 opens with a flashback in which Tweedledee and Tweedledum manage to escape the Mad Hatter, who is involved in some kind of diamond-mining scheme. Flash forward, and Dee and Dum meet March Harriet on the street. Batman sends a drone down to investigate, and Dee and Dum assure March they are flush with cash as a result of their recent score. Tweedledee begins to feel sick and March rushes out. Dum seeks help all over Gotham, first at a pharmacy and subsequently at an urgent care. Despite having money, Dum struggles to secure assistance. Dee eventually falls unconscious and Dum is beside himself with angst and worry.

Analysis: I’m somewhat surprised that Tweedledee and Tweedledum merit their own story. There is not much here, although I am curious to see what happens to Dee.

Synopsis: Batman: Urban Legends #9 jumps to the Saint Rita Hospice Inpatient Unit, as Jean-Paul Valley is taking care of a patient named Stefanos. Stefanos coughs up blood, and Jean-Paul is shoved aside as the care team rushes in to help the patient. Later, Azrael scans the rooftops of Gotham, on a mission to find Bullet-Tooth. An underling protests that Bullet-Tooth is dead because Azrael killed him, but Azrael extracts an address where Bullet-Tooth might go. Azrael goes to the address and finds the body of Bullet-Tooth, who is fully dead and not resuscitated. He laments, then finds an address and tracks down a scientist who has been making a kind of “Lazarus resin.” Though imperfect, it will reanimate a dead person for a few hours at a time – but re-applications are needed.

Before Azrael can question the man further, he is sliced open by a woman holding a poleaxe.

Analysis: I like the character of Azrael but quickly grow bored of his grandiosity and self-importance. Sure, that’s part of the character, but it does not mean that it is especially fun or engaging to read. There’s some obvious crossover with Task Force Z, but unless you are into that series, there’s not a huge amount here to hold the attention. Fortunately, this arc comes to a close in the next book.

Story #4: The Outsiders in “The Fearful” Part 2 by writer Brandon Thomas and artist Cian Tormey

Synopsis: Thirty years in the Future State is where the final story in Batman: Urban Legends #9 sees Duke Thomas strung upside-down while the Fearful torments him. Duke replies that he has already defeated him, over thirty-five years ago. Flashback to that time where Red Robin is using a rebreather to avoid the fear gas flowing from the Fearful. He thinks he can help, but Signal smacks sense into him and tells Red Robin to go after Joker.

Signal then manages to find Katana, Black Lightning, and Metamorpho and supplies them with rebreathers. Meanwhile, Red Robin races off and finds … Clownhunter! The Outsiders eventually converge, and Red Robin informs them that Scarecrow is testing fear toxins at different locations outside Gotham. He asks how the Outsiders know about Jonah Winfield, and they briefly explain about the time travel, spells, and Spirit Jefferson in the Soultaker Sword.

Tatsu tracks Jonah using the tracer Red Robin applied and catches up with him in a subway station. Scarecrow appears and explains that Winfield will be coming with him. Tatsu sheds her civilian clothes and informs Jefferson that Winfield is headed his way. A fight ensues, and the remaining Outsiders, plus Red Robin and Clownhunter, corner Winfield and apply a remedy worked out by Red Robin. While the Fearful is “burned out” of Jonah, the procedure is not entirely successful as a shapeless mass stalks the Outsiders in a dystopian future.

Analysis: Ummm … what? I like Thomas’s writing, but this story is plenty confusing. That’s always a risk with time travel stories, as the chronology is intentionally shifted repeatedly, to the point where it becomes difficult for the reader to understand what is happening in which timeline. Some readers are fine with this, but I generally insist on being able to track the basic narrative of the books I read. While I have enjoyed the Fear State event, Future State has been much less successful in my view. That said, even if the story does not make complete sense, the Outsiders are great fun, especially with my favorite Robin in the mix (Tim). Unfortunately, not even Thomas can do much with Clownhunter, whose appearance here feels forced and thereby continues the string of forgettable takes regarding the once-promising character.

The Kate/Beth Kane story is fantastic. The remaining three stories are forgettable, but at least they are all Gotham-centric.