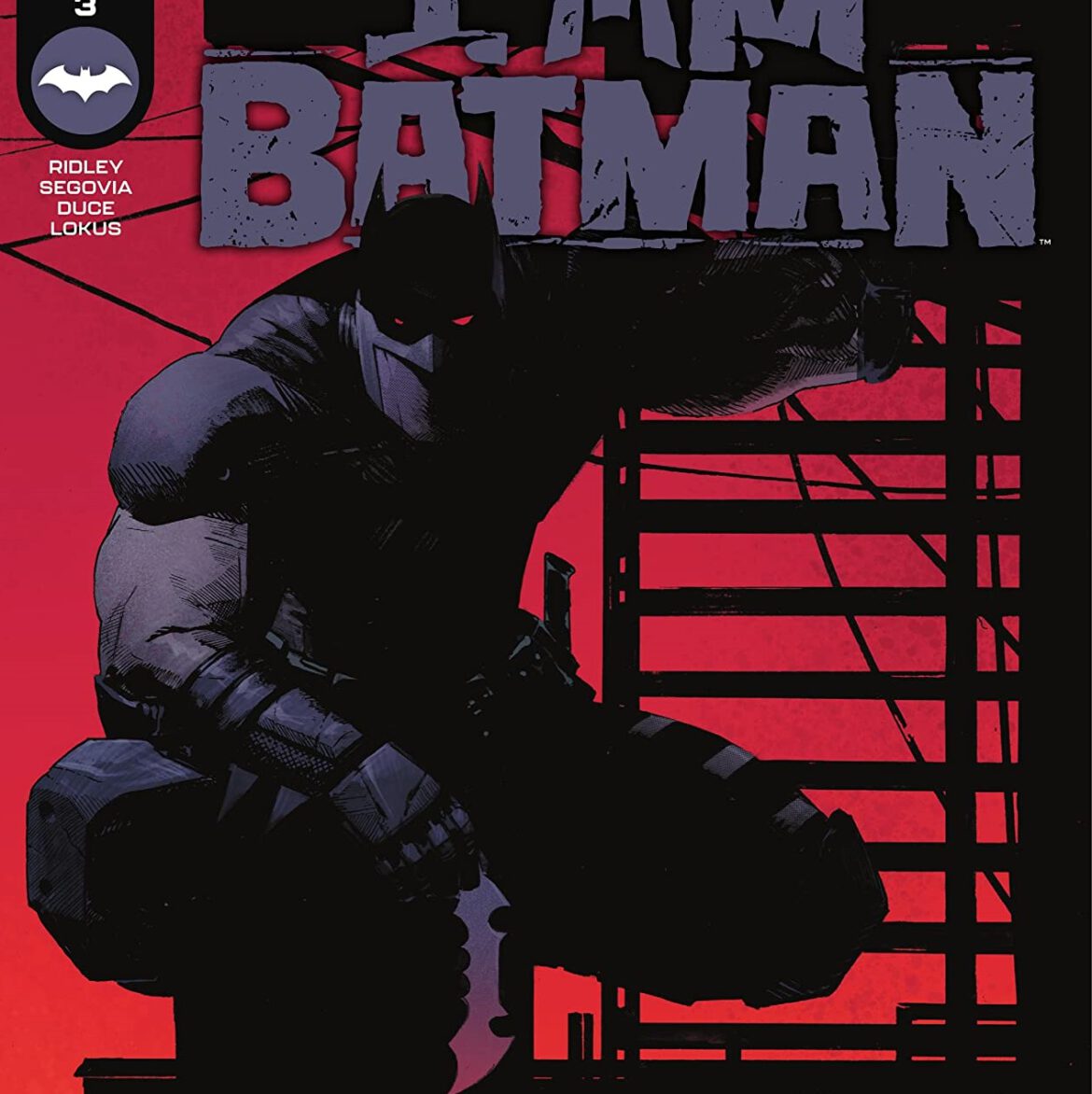 Overview: In I Am Batman #3, Morris Caulfield and Tyler Arkadine are in custody, and it’s a race against time for the GCPD and the Moral Authority over who gets to keep them.

Synopsis (spoilers ahead): I Am Batman #3 begins with Tim ‘Jace’ Fox reflecting on his trials and training with Vesey during his time away from Gotham City as he accepts verbal backlash from his father in current-day FoxCorp, exhausted from his newfound purpose as the New Batman.

Meanwhile, Detectives Chubb and Whitaker escort Tanya Fox to the Gotham City Juvenile Detention Facility to represent Morris Caulfield, the murderer of Anarky as seen in earlier issues. But before she can get very far into developing a rapport with the young inmate, Fear State has kicked in, and the prison is bombarded by Seer’s army of rioters, the Moral Authority, who’ve come to free Caulfield. Chubb and Whitaker lock the place down, with Whitaker heading out to get help from the GCPD, while Chubb prioritizes Caulfield’s protection.

Back at Jace’s Batcave, Vol updates the Next Batman on Tyler Arkadine’s status; he’s heading to Gotham from Vietnam. His extradition raises suspicion for Batman, but before he can delve further into this mystery, Vol pipes in with reports from the Juvenile Detention Facility. Initially, Jace has no interest in interfering, but when Vol tells him his mother is also in the building, Batman puts Arkadine on the back burner again.

This group of the Moral Authority is led by a formidable foe, Ezekiel King, who taunts Batman over social media as he and his faction advance upon the building. Whitaker is unable to get help and struggles to hold the line with the few armed officers he has. Chubb, for her part, opens fire from above, near the interrogation room where Tanya Fox and Caulfield are sitting, but most of their firepower is ineffective. Soon, on the ground, it’s only Whitaker against the Authority. Whitaker takes down all but one of the rioters before he is shot. As he bleeds out on the pavement, he warns those inside that they’ve been breached.

The rioter hones in on the interrogation room and forces himself in, only to be shot by Tanya.

Just before the Moral Authority overwhelms the force, Batman arrives. He pounces upon Ezekiel King and two battle it out. King throws everything he has at the vigilante, but soon he’s down. Seer has been listening and watching, however, and through King’s phone lures Batman to his location.

Chubb exits the building and aims at Batman, warning him that he’s under arrest. Batman, nonplussed, gives her the choice to shoot him or tend to her wounded. Chubb reluctantly backs down while Jace looks in on his mother and Caulfield.

In the comfort and safety of his offices, Simon Saint deliberates with a man named Victor of the Hidden Agenda, worried now that the police are on their way to Arkadine. Victor assures him that everything is going to be fine. We see that for them, it is, as the police unlock the cell to find an apparently dead Arkadine with bloodied wrists.

Analysis: This Fear State tie-in found in I Am Batman #3 continues the rabble-rousing, propagandizing Moral Authority’s takeover of the streets of Gotham. The death of Anarky has ironically unleashed chaos and brought together disparate people for a common purpose: a lawless takeover. As we are shown in the opening pages, these citizens have risen up after feeling oppressed by a system that is in its design careless of the people that support it. Seer, the faceless mouthpiece that sparks their anger and fuels their boldness, manipulates them from afar. The reader understands, of course, that Seer is the villain using ordinary men, women, and children as free fodder for his machinations. We also, for the most part, see nothing in these people but anger. They are willing thugs. But the storytellers here, the writer and artists, do give us some hints at the havoc Seer is wreaking in them. We see from the previous issue with Morris Caulfield the somewhat confused boy who, by chance, took down a mask and got himself arrested, almost absently spouting off rhetoric that we can see that maybe he himself isn’t fully on board with.

In I Am Batman #3 the bottom panel on the opening credits page depicts a rioter, one among many, who wears a glossy-eyed expression. In a book about masks, and specifically about their cancellation, this moment is wonderfully produced in that you can see this ordinary man layered without making use of one. The expression on his face is simultaneous of rage, determination, fear, but also confusion and a foggy sense of displacement. He doesn’t seem to know exactly what he’s doing, nor fully understand why. But it NEEDS to be done.

Maybe that’s because he’s ‘special’ now. Important. The text says that Seer ‘gave them something to fear. Something to fight’. Being afraid and violent is hardly anyone’s desire, but perhaps it’s better than being normal, mundane, unimportant. Accepting life as it is and bowing down to the life-draining status quo that keeps one’s life smelling something worse than our greatest fears. What’s worse than our greatest fears than having nothing to validate that we are more than just a simple, throwaway face in the panel of a comic book that isn’t about ourselves?

Seer has quite effectively pushed these people to MAKE it about themselves. The tragic thing, though, is that even in I Am Batman #3 we quickly forget about these individuals. We are pulled back through the moment and remember that they really are just willing pawns. All but one or two of this Moral Authority are all but forgotten and removed by the end of this issue. Every genuine, heightened warcry for their soul, that they are more than they are allowed to be, are consumed and tossed away with by the political games of forces they likely have never nor will ever see.

While we do get to see a lot of Batman I Am Batman #3, we rarely get Jace. Instead, we focus on the supporting characters quite a bit. Jace’s appearances are more of a shadow than anything. Once again forced to break from Arkadine’s case, Batman needs to intervene to take down the big bad. And he does, as he fits more comfortably in realizing himself as the Next Batman.

In the Future State issues, we see a perhaps alternate future where, in about five years, Whitaker is no longer a detective, having been let down by a police system that failed to meet his expectations on an ethical level, while Chubb remained, though a bit more wearied and contemplative. Here, we see how divergent these ‘younger’ characterizations may begin down these roads. We’ve previously seen Whitaker’s empathetic take on the civilians of Gotham City who may be led down the paths of crime because of circumstances beyond their control, and now he’s the one facing against them all on the battlefront, forced to fend them off. Detective Chubb has been shown as far more mission-oriented, and ‘by-the-book’. For the most part, she sees the world through black and white lenses. Batman clearly saves them from the ‘tank’ that is Ezekiel King, but she still insists on arresting the vigilante, almost to the point that his arrest seems to take precedence over the care of the wounded.

Tanya Fox may have some personal reckonings, herself. After moralizing that Caulfield shouldn’t be meeting violence with violence after he gave her his take that by taking out Anarky he was doing his part to ‘protect’ Gotham City, she shot and killed the man that was coming for them. This, of course, was in self-defense, but we can clearly see how she takes it after Batman’s visit. Caulfield reassures her and relates to her now that she sees what it’s like to be ‘special’.  Though twisted, this relatability may put her on track to become the more embittered woman who eventually works to allow violence on masks in Future State.

An action-packed book with a lot going on, with beautiful art and story work, I Am Batman continues to be a powerful and gritty Batbook that does well without a Wayne. While not an "important" issue overall, this puts the focus on just how unprepared and overwhelmed Gotham City is as it buckles under the Fear State.