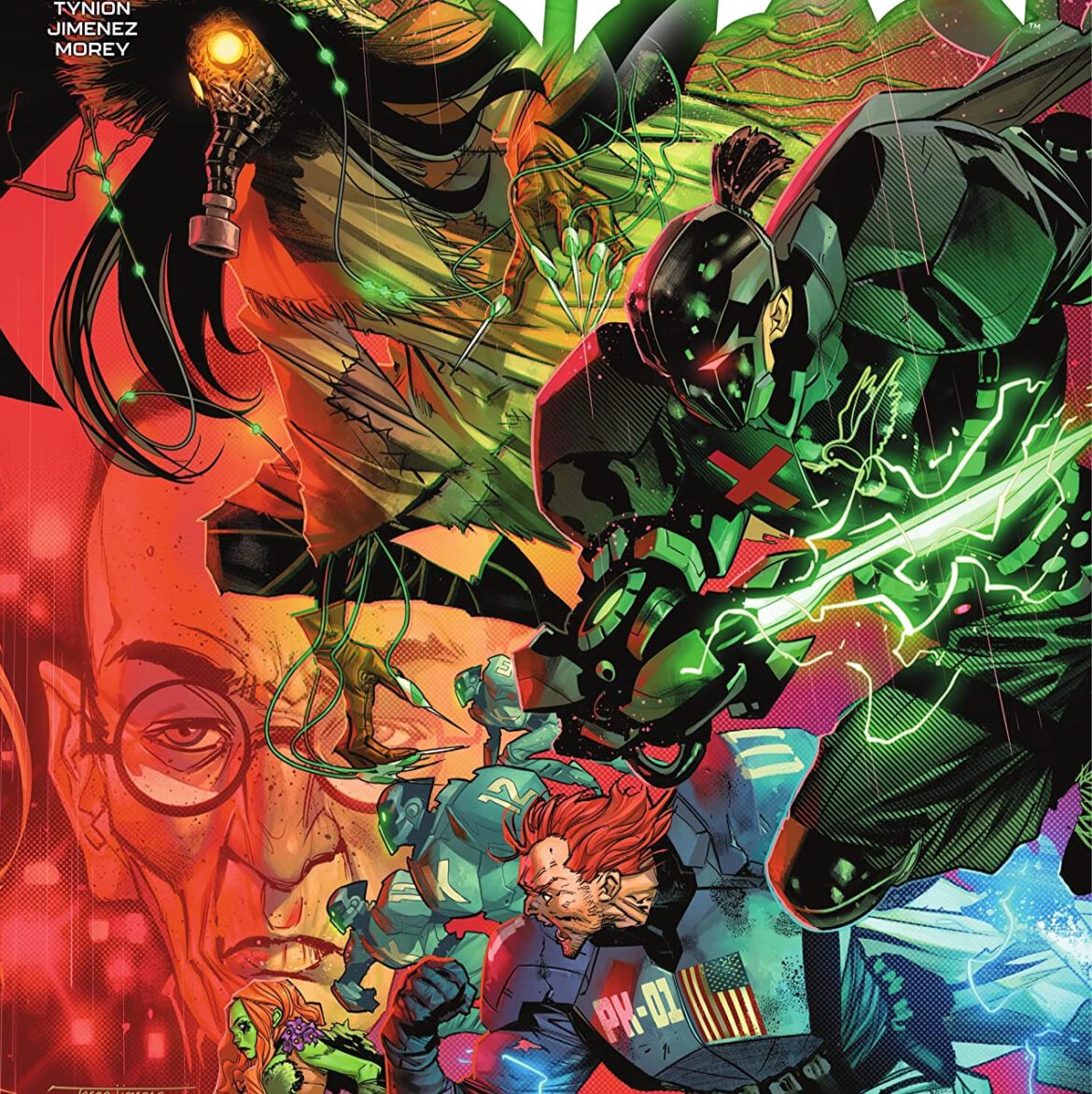 Synopsis: Batman #117 begins aboard the Magistrate Skybase hovering above Gotham City, as Simon Saint is having a meltdown. The mayor has called and is angry with him, Poison Ivy just caused an earthquake in the Narrows, and communication with Saint’s Magistrate team has been lost. Before he can do anything about it, in walks the Bat-Family with Peacekeeper armor strapped over their suits. They are going to take down the Skybase.

In Scarecrow’s lab, Batman and Peacekeeper-01 battle it out while Miracle Molly figures out how to shut down Scarecrow’s “fear bomb.”

In Eden, Harley Quinn confronts Queen Ivy with another Poison Ivy that is bearing Queen’s missing innocence. This missing piece was salvaged by Gardener, and after some convincing from both Harley and Gardener, Queen Ivy merges with her other half. After the merge, Ivy realizes that the people of Gotham are shaking in fear, so she uses pheromones throughout her root system all over Gotham to calm everyone. Afterward, Harley and Ivy kiss.

In Scarecrow’s layer, Batman lays the beatdown on Peacekeeper-01, telling Sean Mahoney that he’s no hero because Sean has only wanted to save himself, not others. Once Peacekeeper-01 is defeated, Batman checks on the status of Miracle Molly. She is holding the trigger to Scarecrow’s bomb, and she’s rewired it to serve as an Unsanity Collective mind machine that will erase every citizen’s trauma. It’s her way of freeing them.

Batman and Molly argue, and Batman ultimately decides to disconnect the uplink in his cowl and hand it to Molly. She connects it and sees what Batman can see, which is a lot. Molly sees news reports of Simon Saint being arrested by the GCPD, the Alleytown siege in the pages of Catwoman ending, and Poison Ivy’s pheromones calming Gotham. Lastly, Molly sees a report that the Bat-signal is once again shining in the sky. The Bat-Family (and Harley) climb the rooftops to watch it.

Batman takes off his mask and tells Molly that though humans are superstitious and cowardly, they have an incredible capacity for good, too. He tells her that once you strip away the politicians, media, and corporations, Gotham is made of people who can come together to overcome fear. When Molly expresses doubt, Batman echoes that doubt saying that while he’s not sure he’s right, he does believe it to be true.

Molly sets down the detonator and hugs Batman. “I want to believe, too,” she says.

Analysis: Batman #117 is a difficult issue to review. With it being the conclusion of James Tynion IV and Jorge Jimenez’s “Fear State” event, it finds a way to bring multiple plot points to a close and delivers a theme intended for readers to ponder. This theme isn’t just tethered to Fear State, it’s also an interpretation of Batman as a character, and it serves as a farewell to the title by Tynion, who will be leaving the book after this month’s Batman: Fear State Omega #1.

In the conclusion in Batman #117, the Magistrate, Simon Saint, Peacekeeper-01, and Scarecrow are all defeated. Scarecrow’s bomb is no more, and the citizens of Gotham have been calmed by a last-minute dusting of pheromones from Poison Ivy. While Jimenez gives readers a dazzling battle between Peacekeeper-01 and Batman, the multiple plot points are wrapped up so quickly and neatly, that there really isn’t any tension.

As mentioned in previous reviews, Fear State was pitched as this massive, city-wide event with all of the major players in the Bat-Family chipping in to stop some sort of totalitarian takeover by the Magistrate and Scarecrow. There even was a lead-in event called Future State that teased itself as being the end result of Fear State. Midway through Fear State, however, this epic battle was shuffled off to other books, with tie-ins in Nightwing and Catwoman, and the main focus of the Batman title morphed into this round-robin between Peacekeeper-01, Batman, and Scarecrow.

Scarecrow didn’t need the Magistrate; he only went through all that work to get Peacekeeper-01 installed as Simon Saint’s number one draft pick. In turn, Peacekeeper-01 was weak-willed and mentally unhinged enough to fall prey to Scarecrow’s tinkering, serving as a “catalyst” who would jumpstart Fear State by (apparently) wandering the streets of Gotham and unloading on people. This is where the wheels of the Fear State bus really start to give, and as mentioned in previous reviews, the end result is an event that felt much smaller than advertised.

Sure, there were new characters and subplots introduced into this arc. On Team Scarecrow, Simon Saint brought forth the Magistrate and the first of the peacekeepers (who would grow legion in Future State). On Team Batman, Tynion and Jimenez introduced readers to Miracle Molly and the Unsanity Collective, most of whom just ended up hanging out in Poison Ivy’s lair for the duration of Fear State. Before Batman needed to do any real sleuthing to figure out what Scarecrow’s goal was, Molly had an epiphany, and this arc sped to the conclusion featured in this issue. In looking back at this arc, not a lot happened.

In Batman #117, not much of note happens either. Right as Simon Saint is about to get his comeuppance, the story veers elsewhere, and Saint is defeated and arrested off-panel. Instead of seeing how the Bat-Family would take him down, readers get to see Poison Ivy and Harley Quinn reconnect, and after their reunion, Ivy dispels all the months and months of work Scarecrow put into priming Gotham (and Batman readers) for this major event. Ivy quite literally achieves this with a wave of her hand, and readers are left to assume that all is well.

While Jimenez’s artwork is consistently an incredible and often breathtaking spectacle of a highlight in this series, the one other highlight this issue has going for it is that theme that this issue ends on. While the Bat-Family stands atop a roof and marvels at the Bat-signal, Batman unmasks and pleads for Miracle Molly to believe in people the way he does.

Molly, with tears running from her eyes, wants to believe, but she’s not sure she can. She tells Batman as much, and Jimenez not-so-subtly conveys both the desire to believe and the doubt in Molly’s watery blue eyes. It’s beautiful, especially with exceptional color work by Tomeu Morey.

In the next panel, Batman looks right back at Molly, and he tells her that he’s not sure he’s right, but he does believe. The two hug, and while albeit silly, a single flower blooms from the floor of this subterranean Scarecrow lair. Moments before, Batman told Molly that when you peel away the politicians, the media, and the corporations (I believe Tynion especially means branding and advertising here, namely because Saint was PR and branding obsessed), people come together and overcome their fears. By opening his arms and welcoming Molly into this belief, and with her acceptance, we get this idea that transcends on quite a few levels.

On one level, Tynion is telling readers exactly what he loves about Batman, as well as what Batman (and similar heroes) inspire within himself. On another level, he’s tying together a theme that played out between Batman and Peacekeeper-01 revolving around this idea of old versus new, of old ways of thinking versus a brave, new world of thought. Whereas Batman had a conflict with Peacekeeper-01, in Molly, he’s able to pass on his ethos, and in that act, there is hope once more (as represented by the blooming flower).

It’s honestly a beautiful moment, and it’s a great lasting impression for Tynion to end on. For as messy, convoluted, and riddled with problems that Fear State was, Tynion and Jimenez manage to stick a landing that is heartfelt and soft-spoken. Readers probably won’t remember much about Fear State in the years to come, but hopefully, they’ll remember how they felt when they read this moment.

Synopsis: The backup in Batman #117 has Cassandra Cain and Stephanie Brown lying low at their designated hideout, the Holmes. They’re waiting for Barbara Gordon to show up. With their comms down, they wait several days until Barbara finally arrives with supplies. She tells them to wait a little longer, as she has a lead on a new loft that they can use as a hideout and residence.

Barbara leaves to crash with Dick Grayson. While the Batgirls continue to wait, they get antsy and step out onto the fire escape ladder. The Seer spots them and taunts them via their TV, which they chuck out the window.

When Barbara finally shows back up, she brings Cassandra and Stephanie to their new warehouse loft in the Hills.

Analysis: Jorge Corona has a really funky, kinetic, and wild art style, and it helps add some much-needed energy to a story where two of the titular Batgirls are just hanging out in a hotel room for days on end. Nothing really happens in Batman #117 that hasn’t happened in the last two parts to this backup, and it ends with the Batgirls moving to a loft in the Hills, which will be their new base of operation in their upcoming standalone title.

Batman #117 delivers a clunky finish to a convoluted story, but there’s a strong sense of heart in the final moments that almost makes up for such a lackluster story.