Review: Legends of the Dark Knight #7 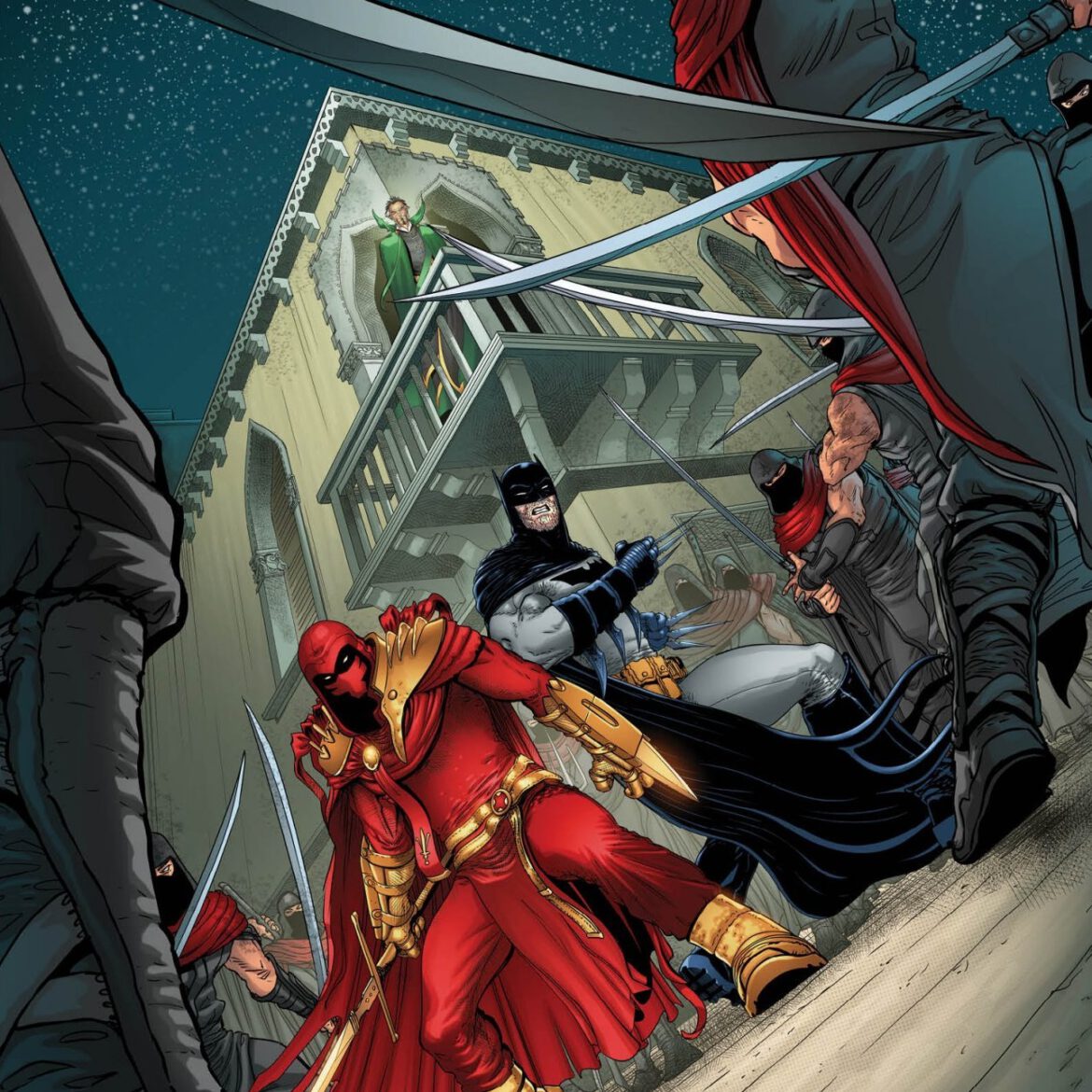 Overview: In Legends of the Dark Knight #7, Batman faces off against Angel and Demon as the League of Assassins drags the Dark Knight from Gotham to Venice in a race to retrieve a relic guarded by the Order of St. Dumas!

Synopsis (spoilers ahead): The story in Legends of the Dark Knight #7 begins in Venice, Italy. Batman is hot on the trail of Ra’s al Ghul, who is seeking the vessel of St. Jaunarius, which may contain an ingredient that can greatly increase the benefits of the Lazarus Pits. Each of the ancient riddles and codices points to the Church of St. Trovaso where Batman discovers its location deep within a hidden antechamber below, conceived by the Knights Templar. He soon discovers that he is not alone, however, as Azrael appears before him, acting as guardian to the relic.

A chase ensues between the Dark Knight and the Avenging Angel all throughout the ancient city, which ultimately ends when Ra’s al Ghul and his League of Assassins interrupt, demanding the vessel. With an obvious go-to-hell answer from Batman, the Dark Knight and Azrael tentatively team up to take on the League.

Finding themselves overpowered, the pair take to the waters below Venice, resurfacing inside Azrael’s sanctum, his own Batcave. The assassin of St. Dumas demands the vessel back, unmolested, while Batman insists on analyzing its contents to discover Ra’s’ secret ingredients. Before the two can come to blows, however, Azrael’s computer feeds them information: Januarius was also of the Order of St. Dumas, and protected the holy grounds of Venice, and had his last stand above an enormous Lazarus Pit to which the vessel acted as a charging agent.

Realizing that uncovering the pit meant bombing the plaza that was built above it, the pair head to the Piazza San Marco to confront the Demon’s Head. They descend upon Ra’s al Ghul, and while the latter lures Azrael into combat, Batman attempts to stop the League from collapsing the entire plaza. The Dark Knight fails, however, as a batarang knocks an assassin…and his bomb… directly into the plaza, blowing a hole through it and revealing the Lazarus Pit.

Azrael, feeling betrayed by Batman, knocks him back and tosses a second bomb into the Lazarus Pit, hiding it once again beneath the crumbled streets of Venice. Batman escapes in time, but Azrael and Ra’s al Ghul appear to have been trapped beneath the rubble.

As Bruce debriefs Alfred on the events and opines his thoughts of fanaticism, we see Azrael return the vessel of St. Januarius to its rightful place.

Analysis: A tongue-in-cheek nod to the Dan Brown series featuring Angels and Demons was a good way of incorporating Azrael, whose involvement with shady religious sect the Order of St. Dumas is an obvious fit for this sort of tale.

The characterization of Azrael here in Legends of the Dark Knight #7 is probably the closest to the original vision from Denny O’Neil and one I personally enjoy.  Amidst the dialogue and pseudo-familiarity between Bruce and Jean-Paul, it’s difficult to place this one-off into continuity, which, as a fan of Azrael, was a little distracting. Azrael’s atmosphere and character seem to come from the original 90’s iteration, while the tenuous relationship that he shares with Bruce feels more like the New 52/Infinite Frontier, a more recent one.

The theme expressed seemed to be fanaticism towards differing philosophies, most clearly portrayed by Azrael’s staunchness to the performance of his duties out of pure faith. This is shown in the argument as to how to handle the vessel of St. Januarius. Jean-Paul Valley wishes to restore and revere the saint’s ‘blood’, which he believed came from the man himself and was capable of miracles, while Bruce Wayne’s pragmatic, logical approach was to discover what the ‘blood’ actually was, and how it affected the Lazarus Pit.

I wish this had been expanded to include Ra’s al Ghul’s own version of faith and his fanaticism, and I feel that this story should have been longer to delve into how his philosophy would interact with Azrael’s. There seemed to be a lead-up to such a layered confrontation, but ultimately it read as a straightforward battle, a team-up of two unlikely allies to take down a common threat.

Bruce’s own fanaticism is referred to at the end of the issue, almost as an afterthought. This is something else I wish had been expanded a bit more. The only true conflict between the two was their faith, or lack of, in the validity of St. Januiarius’ blood. I feel much more could have been said about the different planes of good and evil in each of the characters’ worldviews.

I enjoyed the detective work implemented at the beginning of the issue, with Batman using ciphers and symbology to deduce Ra’s plans and find the vessel first.

The artwork was pretty good, with only an issue with Batman’s face every now and then. Azrael was portrayed well, and there were good moments, such as the descent from above Ra’s, when Batman and Azrael formed a giant, shadowy vengeful specter.

Editor’s Note: This issue collects two digital-first chapters of the series. You can find the chapters of the comic digitally and help support TBU in the process by purchasing this issue for Comixology through Amazon or a physical copy of the title through Things From Another World.

Legends of the Dark Knight #7

As a fan of Azrael and stories that walk around the veil which both separates and unites faith and reality, I looked forward to reading this. I wish it had been given a higher page count, as the themes that seemed to be promised didn’t get proper breathing room, which makes the story suffer. This issue is not enough to truly stand out in its genre, but is a start.