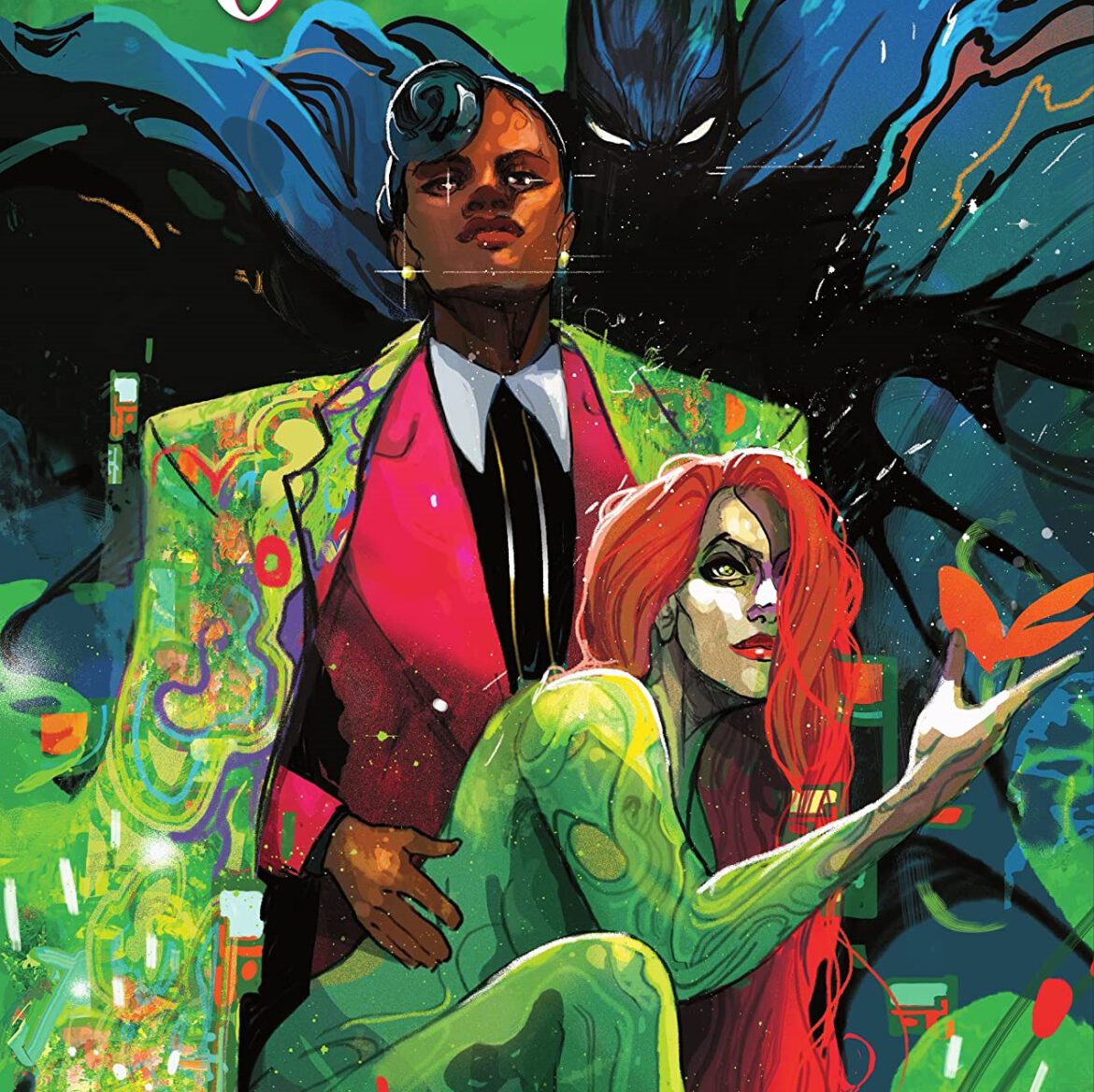 Overview: In Batman Secret Files: The Gardener #1, green-thumbed storytellers James Tynion IV and Christian Ward dig deep into the Gardener’s past and unearth the secret origin of the latest addition to Batman’s rogues’ gallery. Learn not only how Bella Garten came to know Pamela Isley, but how she was integral to the origin of the woman who would one day be known to all as Poison Ivy.

Synopsis (spoilers ahead): Batman Secret Files: The Gardener #1 starts with a seed. Batman arrives at a rooftop greenhouse. Not only is his approach known but his conversation on his radio is heard. Batman sees the other occupant of the greenhouse and is confronted by plant monsters who the stranger calls off. Batman identifies the person as Dr. Bella Garten, an ecoterrorist. Garten is not there to pose a problem for Batman but to talk about Poison Ivy.

She starts her story but skips over her own past. Her mother was Congolese while her father was an American stationed in Germany.  They both died in a car crash, and young Garten was taken in by the base’s groundskeepers. Garten begins her story when American generals arrived in her laboratory in Germany to invite her to join a graduate program in experimental botany in the states. She describes the man who was tasked to run the program, Jason Woodrue. Garten then goes on to describe her colleague, Pamela Isley.  Her research focused on pheromones. The two women started a relationship that eventually turned romantic. Isley, however, grew into a bigger believer in Woodrue’s work, so much so, she became his lover and Garten decided to leave.

The project continued with Isley becoming Woodrue’s test subject. He experimented on the young woman, and when that experiment went wrong, he fled and was transferred to Ivy University. Isley was not as lucky. When Isley finally woke up she was changed. Her blood was replaced with chlorophyll and her sweat was poison. Her pheromones could compel anyone to love her and do her will. Pamela Isley became Poison Ivy, and her main resistance became Batman. Batman came to symbolize everything and everyone that had hurt her.  As Ivy grew, she soon became able to direct the growth of plant life.

For her part, Garten was growing her own monsters to protect the planet. That work felt hollow to her. Someone needed to keep the dream alive, and that person was not her but Ivy. Ivy, however, was in Arkham. Ivy’s own solitude was interrupted when Harley Quinn was placed in the next cell. She and Ivy started a relationship that quickly became romantic. This affair was beneficial to Ivy; she became stable and stronger. For her part, Ivy helped Harley completely reject her monster and take charge of her own life.

That all changed when Amanda Waller took Harley from Gotham and placed her in Belle Reve Penitentiary. When Harley became a member of the Suicide Squad, Ivy was left alone again. Ivy again began to spiral out of control. All she could hear was the scream of the plant world. Soon Ivy sought out Garten. Ivy decided to make all the humans on the planet fall in love with her and make them all do what was needed to save the world. Garten realized that Ivy was becoming like Woodrue, and if she did not help Ivy, Ivy would make her help her. She decided to seek out Batman.

Batman, she knows, also suffers from trauma, and he can understand Ivy. Garten pleads with Batman to help Ivy. She leaves Gotham, but if needed she will return, leaving Batman alone with his thoughts. She does know that Batman will not heed her warning.

Analysis: This story is basically an origin tale of Poison Ivy.  Despite the title being the Gardener, which is the name of the speaker, this is really the story of Poison Ivy. With that, there really is not a lot of action just an extended flashback detailing how Garten meets and falls for Isley and then Isley’s fall to become the eco-villain Poison Ivy. It now looks like Gotham has two eco-terrorists in Poison Ivy and the Gardener.

The art is very stylized. The panel layout is unique in that a number of pages feature round panels that are reminiscent of seeds. The seeds in question are mentioned throughout the story, even in the beginning when Garten says that it started with a seed.

There is also a chaotic feel when reading this story. The panels are random sizes and positioned randomly throughout the page. The flow does not follow a standard panel-to-panel flow in American comics but presents a jumble. This is most evident in the pages where Garten describes the insanity of Poison Ivy.

Overall, this is a fascinating tale detailing the origin of Poison Ivy.  I am not sure of the purpose as Poison Ivy is hardly a new character, and I am not sure she really needs a new origin. The tale does prove to be an interesting psychological tale of what happens when a dream becomes so embedded in a person that it makes them do questionable things. Those actions compound on each other to create yet another rogue for Batman.

The art is stylized and unique, but I am not sure we needed another Poison Ivy origin in a book called Batman Secret Files: The Gardener #1.