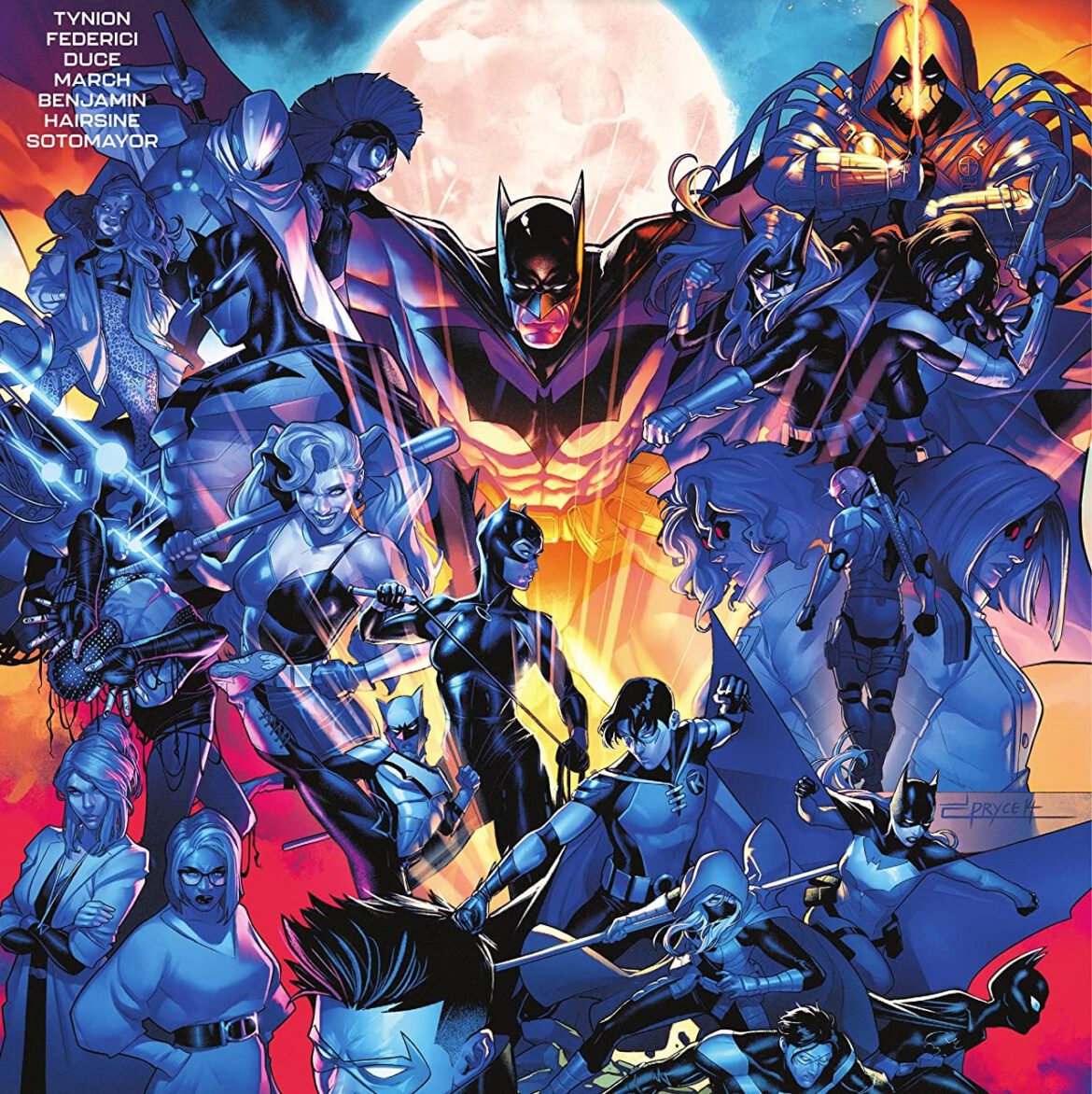 Overview: In Batman: Fear State: Omega #1, Batman foils Scarecrow’s escape from the police and brings the master of fear to the newly constructed Arkham Tower.

Synopsis (spoilers ahead): Batman: Fear State: Omega #1 begins at GCPD Central Precinct, as Dr. Jonathan Crane is wheeled into a police van. He has been temporarily held at this precinct for the last month while the newly constructed Arkham Tower was readied for inmates. As Commissioner Renee Montoya and Mayor Nakano watch Crane get loaded into the van, Crane curses them for being too afraid of letting him move Gotham City forward.

During transport, the two officers driving the police van are held up and assaulted by henchmen working for Scarecrow. Before Crane can escape, Batman arrives, subdues the henchmen, and stuffs Scarecrow into the Batmobile. Crane tells Batman that he feels strange talking to Batman while “naked.” The Dark Knight stuffs a Scarecrow mask over Crane’s face and the two drive onward to Arkham Tower.

While Batman drives, the two talk about all of the other players involved in Fear State, which serves as a bridging point to get readers up to speed on where everyone is ending up. Miracle Molly provided testimony about how Simon Saint used the Unsanity Collective in return for the Collective’s freedom, and she turned herself in to serve time on behalf of the Collective’s robberies.

Simon Saint was removed from the Saint Industries Board, and the Magistrate is no more. Saint is currently under house arrest and is seen working for Amanda Waller. Peacekeeper-01, on the other hand, is seen escaping GCPD custody, killing several scientists and officers in the process. Batman laments that he tried to have Peacekeeper-01 locked up with the Justice League, but scientists attempted to remove his armor before Batman could get the official word to move the villain.

In Eden, Catwoman drops in on Poison Ivy. Ivy is sleeping, so the Gardener lets Catwoman know that all is well. After Catwoman leaves, Ivy tells the Gardener that she’ll catch up with Catwoman in her own time. Ivy then chastises Gardener, telling her that Gardener acted against Ivy’s will by forcibly removing a piece of Ivy’s mind.

Back in the Batmobile, Scarecrow chides Batman for being a relic unable to cope with the changing attitudes of Gotham. Batman offers a similar rebuttal, telling Crane that he is the one unable to change. Batman tells Crane that other villains have created new lives for them, but Scarecrow continues to do the same thing over and over again, clearly showing a fear of change.

The Batmobile arrives at Arkham Tower, and Batman brings Scarecrow to meet the new head doctor who will be overseeing his rehabilitation. The new head of Arkham Tower is Dr. Chase Meridian, a character that fans of the movie Batman Forever will recognize.

Analysis: Batman: Fear State: Omega #1 is less of a closing to Fear State and more of an advertisement for what’s to come in Batman. Through Batman divulging information on everyone to Scarecrow, writer James Tynion IV uses this space to move pieces around the Gotham chessboard, so other writers can pick up the reins and run with these characters in the near future.

Of particular note, Clownhunter will be training with Ghost-Maker. This is interesting in that, as Clownhunter points out in this issue, Ghost-Maker once tried to kill him. In Batman #104, Ghost-Maker put Clownhunter to the test, and Batman had to convince the young vigilante that it was a ruse that would lead to his death. This development also flies in the face of Batman Annual #5, wherein Dr. Leslie Thompkins, while patching Clownhunter up, makes a plea for him to turn away from violence and forge a new, nonviolent path toward helping people. Clearly Clownhunter (and perhaps DC editorial) have forgotten about this moment.

We also learn that both Miracle Molly and Simon Saint will be serving some sort of sentence (in very different ways). Molly will be imprisoned at Blackgate Penitentiary. Saint, on the other hand, will join Amanda Waller (presumably as a member of the Suicide Squad).

The last big development is in Crane being delivered to Dr. Chase Meridian at Arkham Tower. Arkham Tower serves as the replacement for Arkham Asylum, which was blown up in Infinite Frontier #0. No longer under the command of Dr. Jeremiah Arkham, this new hospital for the criminally insane will be run by Chase Meridian, who is a character that first appeared as a psychologist/love interest of Bruce Wayne’s in Batman Forever.

Beyond that, not much else happens in this issue. Peacekeeper-01 escapes and Poison Ivy casts out the Gardener, but Bella Garten was such a minor player in Fear State, it hardly seems worth mentioning.

This issue was pretty unexciting, serving more as a launchpad for future stories than any sort of definitive closure or ending to Fear State. While Batman divulging much of this information was used as a plot device to weave these different character threads together, it seems like such a strange narrative choice. Why would Batman relay this information to Scarecrow? After the chaos and calamity Scarecrow created during Fear State, it’s bizarre to see Batman delivering the day’s gossip, especially when some of that information could be used to put characters like Clownhunter or Ghost-Maker in danger.

Over the course of their conversation, Batman and Scarecrow trade barbs. They try to out-philosophize each other during the car ride. It’s intended to resonate with some of the ideas Tynion played with during Fear State, like the debate over old ways of thinking versus new, but it rings hollow. We had these philosophical debates with Batman and Miracle Molly and again with Batman and Peacekeeper. Now, Batman feels compelled to rehash the same conversation with Scarecrow, after so politely providing Crane with a mask (so he wouldn’t feel “naked”).

It feels very out of character for Batman, and as an epilogue, Batman: Fear State: Omega #1 comes across as a final cash grab after a long, dull, and mostly pointless event.

Four artists chip in this issue, with Riccardo Federici providing the bulk of the art. Federici’s Gotham is hauntingly vast and lifeless, and it’s dense with fog, so what little readers see is obscured by a haze. This Gotham is cold and statuesque, empty and murky, which works, I guess, with where Tynion leaves Batman. Instead of being championed as the hero, it’s revealed that Batman is feared by younger residents of Gotham and that his signal doesn’t inspire hope in the sky anymore (despite Jorge Jimenez providing a glorious panel showcasing the exact opposite feeling with the Bat-Family in the Fear State finale in Batman #117). If the goal was to leave readers feeling empty, this issue succeeded.

Batman: Fear State: Omega #1 is more shuffling of characters on the Gotham chessboard and less of anything note-worthy or interesting for the Batman title. It’s essentially a bland, lifeless advertisement for what’s to come.