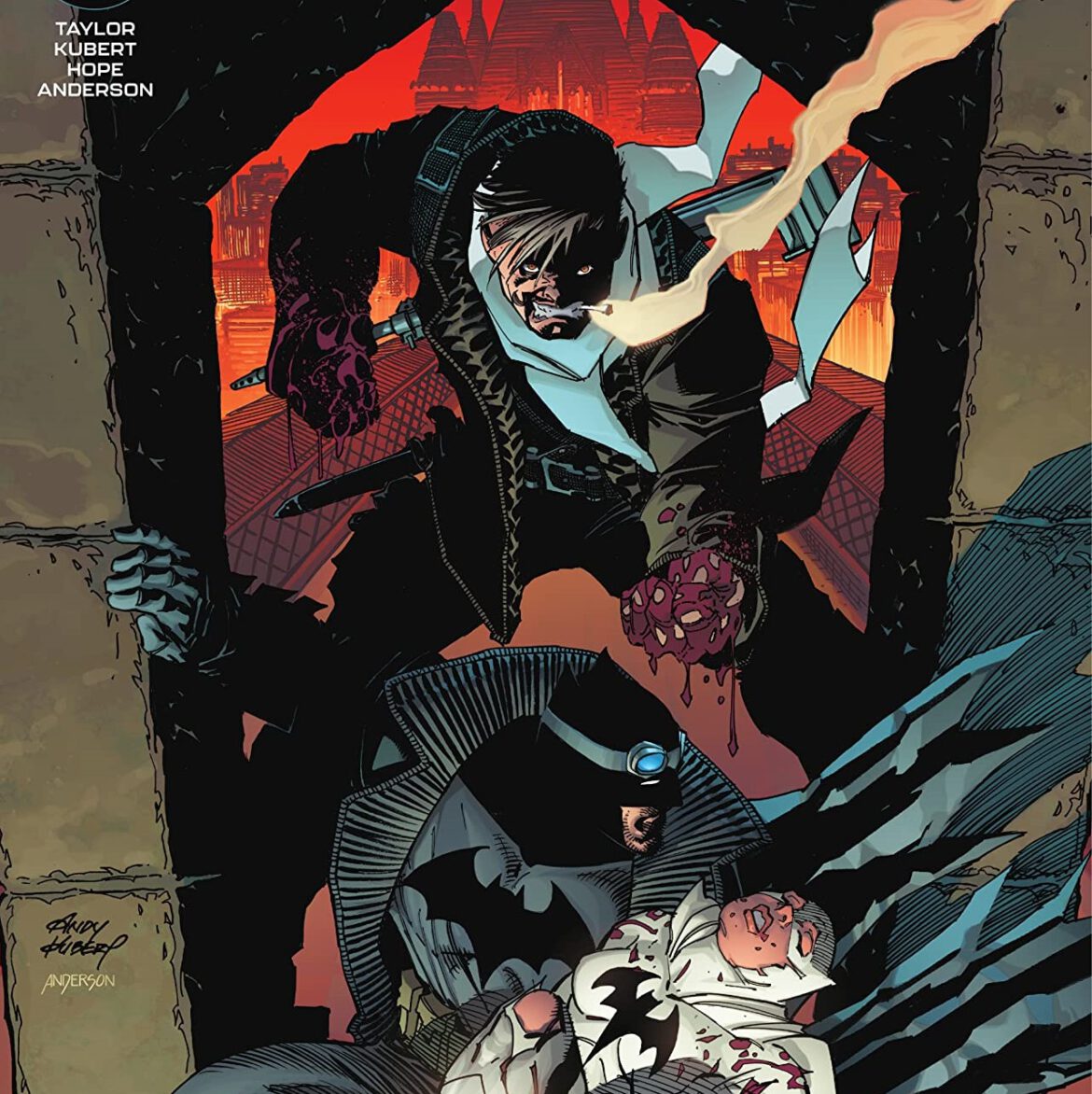 Overview:  In Batman: The Detective #6, Batman and his allies fight Equilibrium to save London.

Synopsis (spoilers ahead): Equilibrium has broken into prison to spring her people, who have been identified as mercenaries as Batman: The Detective #6 begins. She does have one man in particular that she’s looking for, the hulking Sullivan. Batman is all too familiar with Sullivan, after all, he was the one to put Sullivan in prison. Charlotte needs his help if she is going to bury London.

Onboard a private plane heading across the English Channel, Batman, Squire, and Ducard plan their next move. Batman contacts the European Alliance of the Bat in hopes of uncovering the weapon Equilibrium will use to destroy London. One of the generals admits to selling weapons that have since disappeared. This provides the clue Batman needs. What he needs now are makes, models, and spec sheets to find vulnerabilities.

The trio lands and Ducard heads out to hunt down Equilibrium while the other two return to the Castle of Beryl Hutchinson. For her part, Beryl is ready already wearing the armor of the Knight. While Squire heads off, Batman admits to Beryl that he knows who the child is.  She is the daughter of the smuggler who returned to the burning warehouse ten years earlier.  The woman has been in prison since, leaving her daughter without a mother.  Beryl took the child in to make up for the destruction of her family.

Batman gets a call from Ducard. The three heroes hit the road. Ducard has found Equilibrium, and he is injured and prepared to die.  Batman is not about to let that happen and arrives at Ducard’s coordinates in time to save him and engage the terrorists.  The fight is on, and Equilibrium boasts that he has failed. The weapons Equilibrium has are a fleet of military drones sold by the United States and then sold again to Equilibrium. Batman, however, has a surprise for Equilibrium. With the help of Nightwing and Oracle, he has taken control of the drones, and they do not attack.

Ducard aims at Charlotte with the intent to kill her. Batman disarms Henri, and Equilibrium points her weapon at Batman. Squire stands in front of Equilibrium saying that Batman has never saved her, and she tells the woman that Batman in fact just saved her.  Charlotte, with her mask removed, turns the gun on herself and pulls the trigger. Batman grabs the gun, saving the life of the woman. Batman will get her contained and then get her help.

The story closes with Squire’s mother being freed from prison with the help of Bruce Wayne and his connections with the parole board. He wants to undo what he has done.

Analysis: The story presented in this series and concluding in Batman: The Detective #6 is very interesting. It concludes by being a morality play where the characters learn to face what the consequences of their actions really are. That is the sole motivation for Equilibrium. She is trying to undo the consequences of Batman’s war on crime and the people he has saved. She believes that the death of some people may save the lives of others. I cannot fault her logic. In her confrontation with Batman, she uses the example of the Joker. Batman saves the Joker’s life and how many people are dead because of the Joker. In her logic, Batman is just as responsible for those deaths as the Joker.

The second theme is the theme of friendship. Ducard faults both Wayne and Charlotte as not using the help of friends. Ducard even mocks Bruce for not having a Bat-Army.  What Ducard fails to see is that Batman does have friends; in fact, he has a family that has his back and that is shown in Knight and Squire along with Nightwing and Oracle. Batman could not have saved London without their help.

The art continues its unique style. It has a gritty style that shows an older Bruce Wayne/Batman in action. I still really like the Batman model of the trenchcoat-wearing vigilante but the militaristic Bruce Wayne with the sides of his head shaved leaves a lot to be desired.

Finally, I am happy to see Knight in action.

This is an interesting story with a very real-world message. Good or bad, all of our actions have consequences, and the sooner we realize that the better. The story is fantastic, thought-provoking, and action-packed with high stakes.