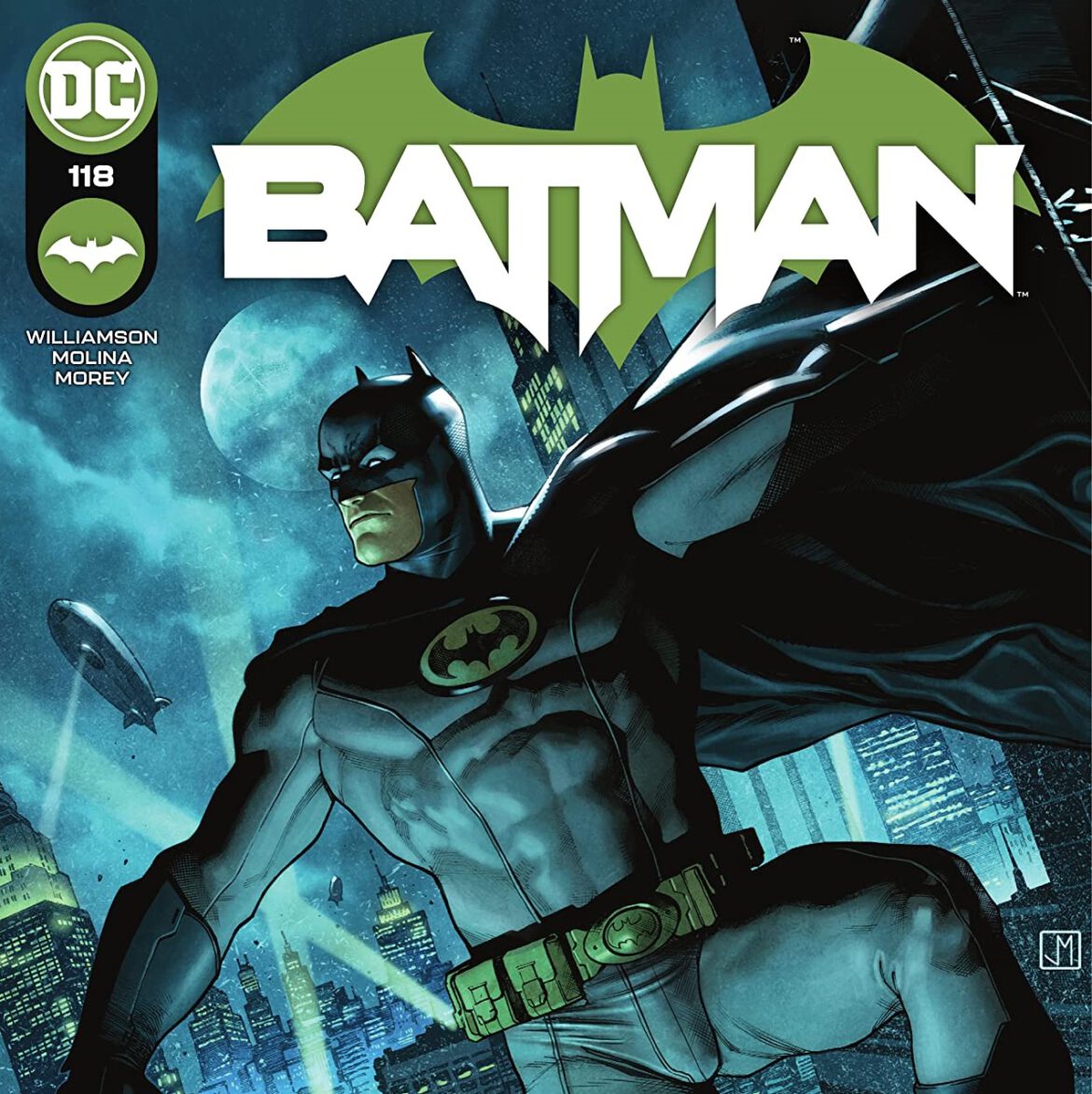 Overview: In Batman #118, Batman leaves Gotham for Badhnisia when he discovers that members of Batman Inc. have been arrested for murder.

Synopsis (spoilers ahead): Batman #118 begins after Fear State, as Gotham celebrates the end of Scarecrow’s reign of terror and the removal of the Magistrate with fireworks and a massive, city-wide celebration. Two crooks take advantage of the festivities by breaking into a pawn shop. While the lead crook works on busting the lock, his backup thinks he sees Batman watching them from a nearby rooftop. The lead crook reassures his friend that Batman is too busy dealing with the a-list villains to worry about two small-time thieves.

Suddenly, Batman appears. On a nearby street, a GCPD patrol car slowly drives past a row of buildings. The two crooks come running out of the alley, demanding to be arrested. They don’t want Batman to wail on them.

Over the com, Oracle asks Batman if he enjoyed scaring those two crooks. Batman tells her that he doesn’t know what she’s talking about, then he proceeds to say that he feels something is off in Gotham. Oracle tries to reassure Batman, reminding him of the hell that Gotham has been through the last few years. When she suggests that Batman train with Ghost-Maker, Batman notes that Ghost-Maker left Gotham with Clownhunter (as seen in Batman 2021 Annual #1).

Just then, Oracle gets a ping. A red light camera has scanned the faces of known killers heading uptown toward the Billionaires Club Ball. Batman scopes out the suspected target site, but it’s a ball where all of Gotham’s billionaires are dressed like Batman’s classic rogues. Batman scans the crowd, looking for dead giveaways for concealed weapons or raised body temps.

Firefly arrives, and he and his men hold up the billionaires, demanding that they empty their pockets. Killer Croc jumps into the fray, beating down Firefly’s henchmen. When Firefly scorches Croc, the costume melts away to reveal Batman. Batman takes down Firefly, and the billionaires all celebrate.

A little girl dressed as Punchline comes up to Batman and asks for an autograph. He gives her one, then uses a smoke bomb to disappear. Oracle confirms that she scrubbed any evidence of the showdown from partygoers’ phones and social media feeds, and she ensures Batman that the media will see it as part of the party. When Batman rebuffs her advice to enjoy the celebration, she asks what he did after solving a big case. He reflects on his closest relationships.

Oracle then tells Batman to join her and Nightwing for breakfast, but something interrupts Batman’s train of thought. A Gotham Globe zeppelin flies by with breaking news that members of Batman Inc. have been arrested for murder.

In Badhnisia, Bruce Wayne makes his way to the crime scene that Batman Inc. is being framed for. A detective named Cayha is investigating it alone, against the wishes of fellow officers. She sees some strange substance on the ground by an outline of a body. Before she can touch it, Batman appears. After some back and forth, Cayha tells Batman that members of Batman Inc. turned themselves in after the body of a villain known as Abyss was discovered. It was a villain they arrived to defeat.

Batman spends a few moments at the scene, then deduces that his former friends at Batman Inc. did kill Abyss. When Cayha asks Batman what his relationship with the team was, he tells her he lost contact. She then mentions that a certain rich guy sponsored Batman Inc., to which Batman tells her that Bruce Wayne no longer is able to fund them.

Cayha, however, meant someone else. Lex Luthor then enters the crime scene, telling Batman that he picked up the slack when Bruce Wayne couldn’t afford it anymore. He’s here to protect his investment.

Analysis: Batman #118 is off to a great start with writer Joshua Williamson and artists Jorge Molina and Mikel Janin. Most of this issue is set up, showing Batman disillusioned by the citizens of Gotham, who are celebrating him as a hero after the ending of Fear State (see Batman: Fear State: Omega #1). He’s also looking for the next big case to keep his mind busy, and in not finding it, he’s resorted to scaring two low-level hoods busting into a pawn shop.

When Firefly attacks the Billionaires Club Ball, Batman finds something to do, but even that isn’t enough to keep him focused. It’s not until he sees a notice from the Gotham Globe that Batman jumps into the next big case that propels him overseas.

This idea that Batman doesn’t know what to do with himself when there’s no major criminal activity or event going on is interesting. It’s not new, but it’s a spin we haven’t seen too much lately, and it’s one befitting the character. Bruce has rarely been one for enjoying idle time, and when he has found time to get away, he’s always managed to find a case to keep him busy. There’s a reason for this, and sometimes creators like to steer readers to this idea that Batman gets bored. This boredom was recently featured in the graphic novel Batman: The World, wherein Bruce tries to go on vacation but ultimately grows weary and lost. But in the case of this issue, it’s more than boredom.

There’s something tragic that’s buried within Batman’s disillusionment, and the creative team only hints at it once in Batman #118. When Barbara asks Bruce what he does when he’s solved a big case, he reflects on time spent with his closest relationships. Batman thinks of kissing Selina. He thinks of standing atop the GCPD with Gordon, who is off chasing the Joker. He thinks of playing chess with Alfred or visiting Kal-El in the Fortress of Solitude. Batman’s thoughts also touch on Robin, but a much younger Robin and not the man he has grown into.

The world around Batman has changed, and he’s lost. Everything he used to do when he solved a big case is either no longer an option or events have altered it. Robin has grown up, Alfred has passed away, Superman is off-world, Gordon is out of the country, and Catwoman has separated from him. Batman doesn’t have any friends his own age, nor is he a father at the moment, or even a lover to someone special. This might be Batman feeling alone.

With Gotham safe in the more-than-capable hands of his Bat-Family and the city having changed so much around him, there’s really nothing keeping Batman in Gotham. Seeing that accusation of murder is the perfect opportunity to propel Batman to the world stage, as well as give him something to do, so he’s not left alone with his thoughts.

Readers don’t get too much globe-trotting in Batman #118, but with the way this issue ends, with his old friends at Batman Inc. having murdered a villain by the name of Abyss, there’s a promise that Batman will be delving into this new puzzle, complete with a new character in Abyss, for some time. Lex Luthor’s involvement will hopefully cast shades of gray upon the mystery as Batman will most likely have to team up with Luthor, at least for a time.

The art in this issue was provided by both Jorge Molina and Mikel Janin. While the two have very different styles, coloring from Tomeu Morey helps to smooth the differences in art over with a similar sheen that attempts to make everything more uniform. All in all, Batman #118 is an absolutely beautiful issue, and it’s slow enough to let readers take in the sights and get a feel for a slower-burn detective story kind of mood. It should also be mentioned that the neon lights and fireworks of Gotham at night are phenomenal.

The fight with the henchmen dressed up as Batman’s classic villains was fun. It brought much-needed energy to this issue and balanced the brooding nature of Batman’s disillusionment with something for him to do. It also served as a bit of foreshadowing and as an allegory for Batman’s departure from Gotham. With him leaving his city to investigate a murder overseas, he’s also leaving his classic villains behind and chasing a specter of someone new — Abyss. To add to this new direction, Batman starts this issue wearing a black Bat-symbol upon his chest, and when he first appears in Badhnishia, his suit has the yellow oval Bat-symbol on clear display.

New villain. New/old costume design. New locale. It’s disarming how slowly and carefully Williamson and the creative team eased readers into this new direction for Batman, and it feels like a perfect fit.

Batman #118 leaves James Tynion’s Gotham behind as writer Joshua Williamson ushers in a new era by sending Batman on an exciting, globe-trotting mystery. This issue is fresh, fun, and teases a grand adventure ahead.