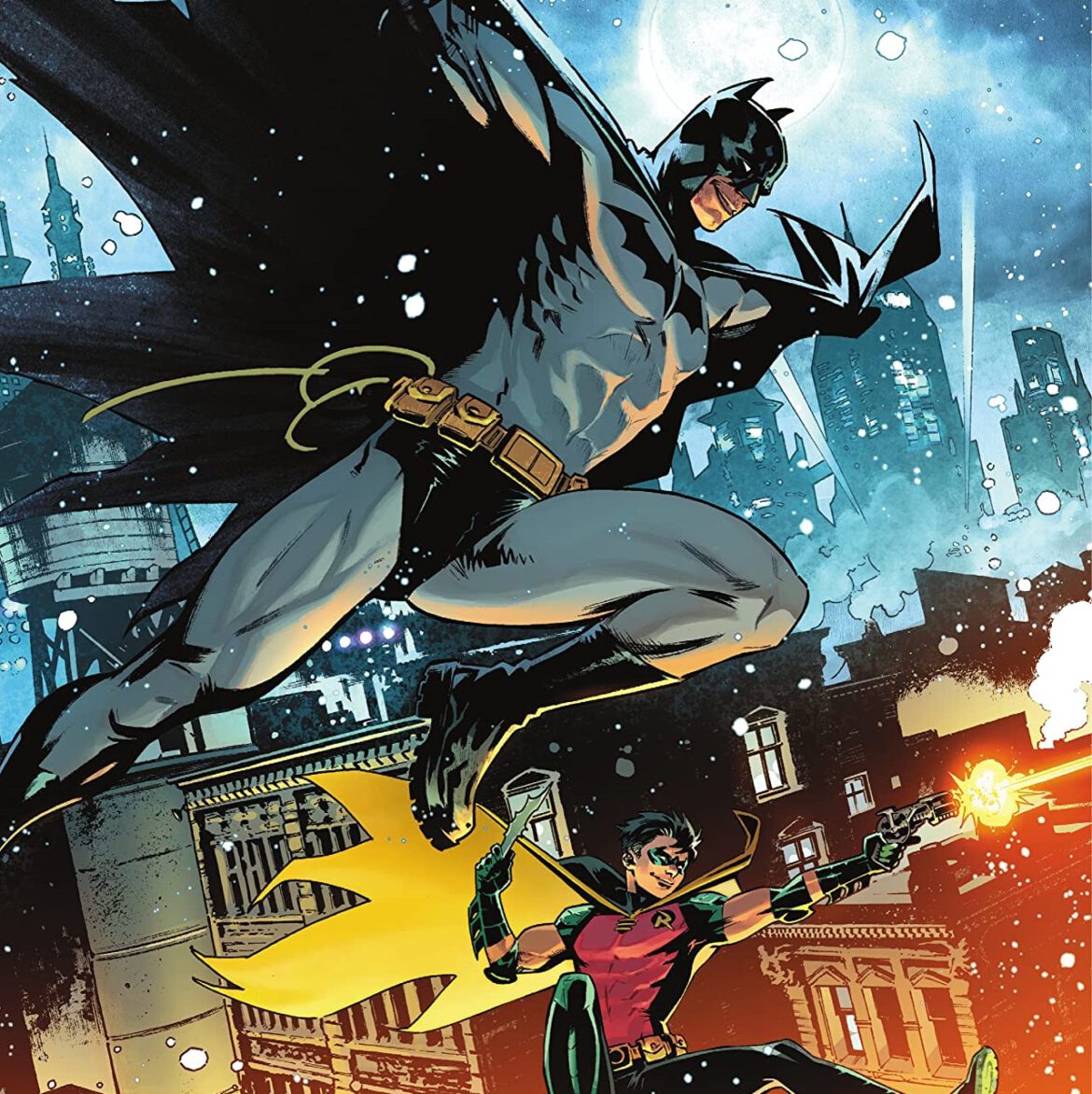 Synopsis: In the first story found in Batman: Urban Legends #10, Bruce Wayne is stitching up a wound in his flank while he converses with Tim Drake (as Robin). Struggling a bit with Bruce’s “brooding,” Robin had gone to Blüdhaven to confer with Dick a few days prior. Unfortunately, this trip conflicted with an ice-skating date with Bernard, who is quite understanding. We flash forward to a conversation in a church about Gothamites stealing from places of worship.

The scene flashes back to Blüdhaven where Robin and Nightwing are discussing Bruce as they take down Tusk. Flash-forward to Gotham, where Batman and Robin are discussing the anger of the citizens, which Batman attributes to his own failure. Robin disagrees and points out the defeat of Scarecrow and the Magistrate. We flashback to Blüdhaven, where Robin and Nightwing finish off Tusk and Nightwing explains to Robin that while he was able to bring Bruce back from the brink repeatedly, Bruce always fell back into his hole. Nightwing argues that the effort nearly cost Dick his future and that Tim deserves more, especially now that Damian has earned the title of Robin.

Flash forward to a mob of armed and angry citizens approaches. Robin braces but is shocked when Batman grabs the leader and hugs him while expressing contrition. Batman then moves all of the mob into the church where there is warmth, light, and food prepared. He tells Robin that he agrees with Nightwing – who called – and that Robin is indeed allowed to be happy. They move outside the building in a classic gargoyle panel and discuss his happiness with Bernard. Apparently, Tim and Steph need to talk.

Robin then gives Batman his holiday gift – the Bat-signal briefly turned on, the result of Oracle’s work. They wish each other the tidings of the season as the snow falls.

Analysis: This is mostly a fairly standard Batman holiday narrative. I’m always happy to see Tim Drake as Robin, and I also typically enjoy his teamwork with Nightwing both as it relates to Rogues and to Batman. I am also pleased to see that the Bat-Book editorial has not neglected the necessity of expanding on the Tim-Bernard relationship. I like the queering of Tim’s arc, but I do not care for how little care has been given to explaining the complex relationship between Tim and Steph. More was needed here before or at least concomitant with the commencement of Tim’s relationship with Bernard. Perhaps future Urban Legends stories will unpack the past, present, and future of Tim’s relationship with Steph, but until then, the narrative structure for Tim feels off-kilter.

Story #2: Tweedledee and Tweedledum in “Down the Rabbit Hole” Part 2 by writer Sam Johns and artist Karl Mostert

Synopsis: Tweedledum frantically drives Tweedledee to the hospital. He is stunned to be told that Dee must wait his turn. Dum tries to speed things up by dumping a suitcase full of cash on the counter of the emergency department and is shocked when this does not work. The Gotham City Police Department shows up, and Dum exits to find his car being towed. He sees that Dee is gone from the car and brandishes a firearm at the tow truck driver.

Batman appears and subdues Dum. Dum awakens in Micro-Cave 48 to find Batman standing over Dee’s unconscious form. Batman is caring for Dee, and he tells Dum that Mad Hatter’s tech has caused serious neurological damage to Dee. Dum is horrified, and Batman explains that Hatter’s tech is currently being evaluated at Belle Reve Penitentiary. However, if Batman releases Dee to Belle Reve, Dum may never see him again. Dum has a terrible decision to make.

The Mad Hatter is watching TV and learns from the news that the warden believes they can help Dee, who along with Dum, has been admitted to Belle Reve. Hatter is furious but comforts himself with the knowledge that there are additional surprises in store for the warden should she make enough progress to enable Dee to explain what has happened.

Analysis: I remain a bit confused as to why Sam Johns thinks Tweedledee and Tweedledum merit their own story. As a public health professor, I personally did not mind the critique of US healthcare, but it was heavy-handed and seriously unsubtle. I am a fan of Mad Hatter, and what with the Red Alice story and now this Dee and Dum tale, it feels as if the Batman Universe might be preparing an arc focusing on Hatter. (Tynion also alluded to this in Batman given that Scarecrow’s mind machine was in part based on Hatter tech). We shall see if that survives Tynion’s departure, but the prospect of more Hatter is about the only redeeming feature of this short arc.

Synopsis: Flashback to 1152 and the assassination of Count Raymond II of Tripoli outside the gates of Jerusalem. The Knights Templars apprehend a member of the Assassin sect who, under duress, states that he is not afraid of pain or death because of Ra’s al Ghul and the Lazarus pits. The Knight Sergeant Jacques-Ferdinand Strauss set out to destroy all of the pits but was himself assassinated before he completed his mission.

Flash forward to the confrontation between the strange woman and Azrael. The woman identifies herself as the latest apprentice in Strauss’ mission. She is the Poor Fellow. She argues with Azrael, and they fight. She lays down her weapon and prepares for Azrael’s final judgment. He withholds it. The Poor Fellow informs Azrael that other descendants of the Templars remain, and she disappears in a cloud of smoke.

Azrael returns to the palliative care unit of the hospice and converses with Stefanos. Azrael is confused and unsure of his next steps.

Analysis: If Templars and holy quests are your jam, you might like this arc. For me, they are not, and I did not. The Poor Fellow fizzled out quickly enough on a standard Templar plot that reads like (barely) warmed-over material from Indiana Jones and the Last Crusade. Perhaps this time Azrael will not choose poorly? I remain unsure, but this story was likely only appreciated by Azrael fans.

Story #4: Nightwing in “The Bats of Christmas Past” by writer Tini Howard and artist Christian Duce

Synopsis: Nightwing is patrolling a department store where the crowd is stressed and angry. A woman brandishes a knife. Some leftover Scarecrow goons break into the store and begin spraying fear gas. Nightwing springs into action at the same time he fends off Oracle on the comm who is chastising him for working on Christmas Eve.

Oracle warns him that half the Bat-Family began suiting up when he refused to answer her first call. He promises to show but is repeatedly doused with fear gas. A tanker truck screams out of the parking lot and is headed for Gotham. Nightwing quickly commandeers the truck but needs to dispose of the gas and does not want to do so with his equipment as Babs will know that he is working. Nightwing goes to what is left of the Batcave in Gotham and is apprehended by Batgirl (Prime, Babs v1.0). He stresses that Babs cannot be there and will not dress as Batgirl right now.

She shows him the past, which consists of previous happenings at the Teen Titans Academy. Babs disappears and Nightwing finds himself being accosted by more Scarecrow thugs in Wayne Manor. He escapes to the roof where the figure of Spoiler appears and ushers him back down the chimney. He sees the Bat-Family hanging out in Bruce Wayne’s brownstone at the present time arguing about Dick’s absence. Back at Wayne Manor, Nightwing again fights off Scarecrow’s cronies until the figure of Cass appears. He faces a future that includes his own tombstone.

As he returns to his senses at Wayne Manor, he sees that someone has disarmed and trussed the remaining villains. Nightwing calls the GCPD and hurries over to Bruce’s brownstone. Once there, he finds out that it was Cass who came out to help him finish off the assailants, and Nightwing proclaims it one of the best gifts he has ever received.

Analysis: The attempt to integrate the end of Fear State feels forced, but I am a sucker for heartwarming Bat-Family stories, and this certainly qualifies. It is neat to see the Batgirls positioned as guides for Nightwing but in quite different ways. All three seem much older and more mature in both writing and art than they currently appear in the Batgirls title, and I much prefer this version. Duce’s art is also strong, especially his representation of Nightwing.

It’s nice. It’s not thrilling, but it’s nice. Happy Holidays for those who observe one at this time of year.