Review: Legends of the Dark Knight #8 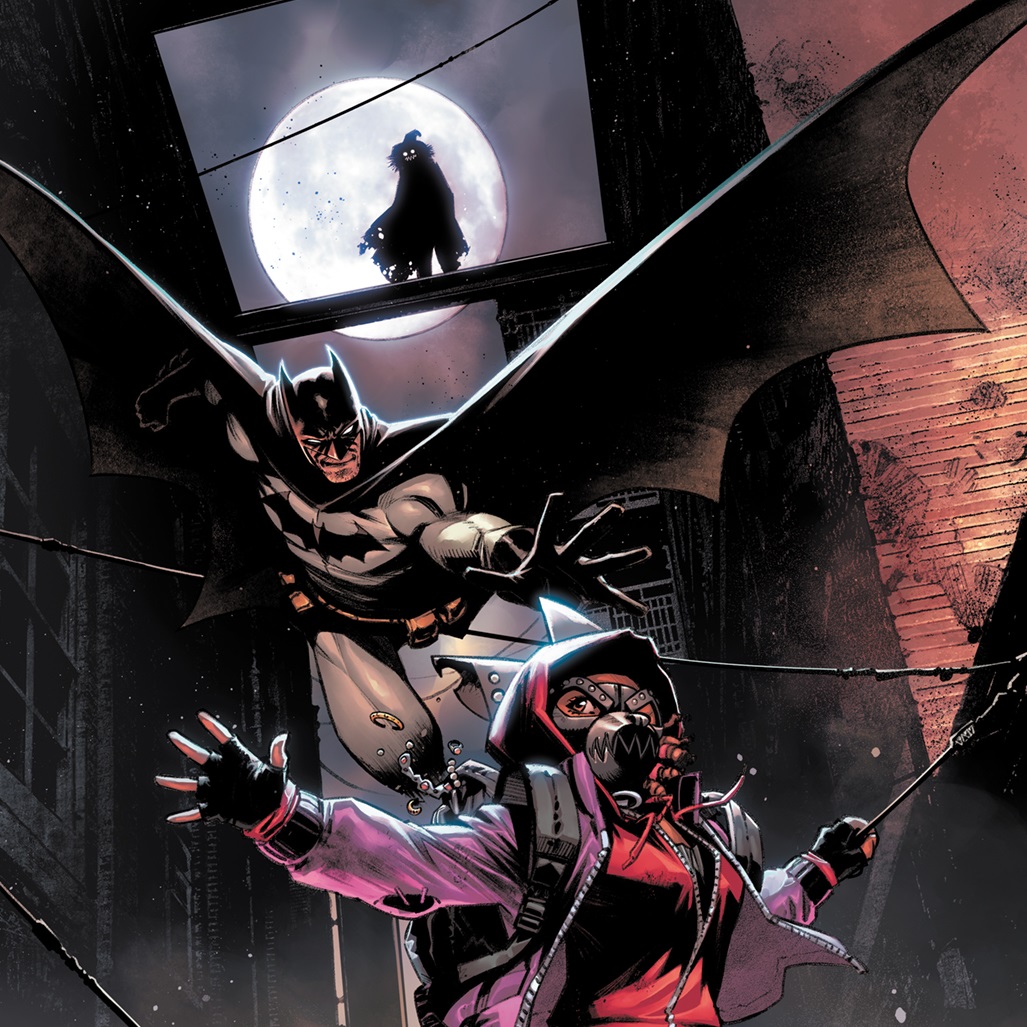 Overview: Two short tales make up Legends of the Dark Knight #8. In “The Ghost and the Knight,” Batman encounters a new gang of thieves; but the truth behind the Ghostdogs will have Batman digging deeper into Gotham’s dark corners. And in “Healing,” Scarecrow’s latest experiment in fear threatens to undo Batman once and for all….by taking away his pain. Can Bruce Wayne survive a life removed from his deepest trauma?

Synopsis (spoilers ahead): The first story in Legends of the Dark Knight #8 is called “The Ghost and the Knight.” A late-night security guard is alerted to suspicious activity while making his rounds after hours at Winston Jewelers. Upon inspection, he is met and gassed unconscious by a new gang of thieves dubbed by the media as the Ghostdogs. These four have been making a name for themselves as formidable, quick, and efficient in their crime spree of increasing ambition.

They don’t make it very far out of the jewelry store, however, before the shadow of the Batman descends upon them, quickly dispatching three of them. It takes him a moment to catch up to the final most elusive member, but when he does he discovers she’s a student, still in school. Calling herself Ghost, she tells Batman her origin story: she’s never fit into regular society, being of a lower class than her schoolmates. The apartment building where she and her mother lived had been burned down by their landlords for insurance money, which they used to create Winston Jewelers. Now homeless, desperate, and angry, she had formed the Ghostdogs to not only help her and her mother stay on what feet they could, but also to get back at their monstrous slumlords.

A compassionate Batman lets Ghost walk after retrieving the jewels. From a distance, he then follows as the homeless girl heads back to the decrepit streets back to her new base and ‘family’ underneath the questionable comfort of a bridge and in a makeshift tent, where she reunites with her mother. It turns out she didn’t quite return all of her loot, though: she showcases a necklace that should fetch them security enough for another few months.

Commissioner Gordon meets up with Batman outside of a large, luxurious building. Gordon asks if the Ghostdogs had been located. Batman says no but, as the crimefighters gaze up at the Winston executives enjoying themselves in comfort and leisure, he’s got something else he wants to look into.

The second story in Legends of the Dark Knight #8 is called “Healing.” Bruce dreams, reliving yet again that horrible night of his parents’ death, only to awaken to the Scarecrow’s presence before him. Jonathan Crane explains that he has dosed the Dark Knight with an experimental fear toxin that allows the removal of the darkest event of one’s psyche and removes it in his sleep. Bruce is furious that his life’s history was taken from him without his consent, and Batman flees to the Batcave below, to craft an antidote.

Having forgotten the most important and traumatic event of his life and armed with events of that night from newspaper articles and a modified CPAP machine, Bruce returns to sleep to reverse Scarecrow’s effects. He admits that with the removal of Batman’s origin, he did feel better. But he also acknowledges that a life removed of its essential pain is a false life to live. He witnesses the darkest night once again and is reunited with his pain once again.

Analysis: The two shorts showcased here seem to have been purposely matched. They both ask ‘what if Bruce Wayne’s experience had been slightly altered?’

In “The Ghost and the Knight,” this is made quite clear in the juxtaposition of Ghost’s experience with losing everything she had with Bruce Wayne’s experience of losing those he loved. Both desired vengeance and adopted personas that would strike fear into the hearts of their adversaries. But whereas Bruce had the wealth to provide the means necessary to make his leap into becoming the world’s greatest detective, Ghost had little and was reliant only upon the skills she learned through necessity. This story was fairly original and shows Bruce a shift in perspective that allows for reflection that can lead to the healing of a young life.

In “Healing,” Scarecrow offers Batman a way out of his self-imposed doom of facing the dark night after night. This story is not the most unique in the Batman Universe, as we have seen this very concept brought up in an episode of Batman: The Animated Series in which the Mad Hatter had forced a similar situation upon Batman, with very much the same result, as well as several iterations in comics that again end up with the same result; Bruce Wayne’s destiny lies in the full front-facing embrace of that pain that was born when his parents died, which would inevitably lead to spawning Batman.

While both stories differ in their premises and plot, there is a curious subtle message conveyed in Legends of the Dark Knight #8: the hardship of loss is something to be held close to as your personal driving factor. On the one hand, Bruce comforts his young spectre knowing what he will become and choosing to let him go down that path even if it’s only a false path taken from his head. On the other, he allows Ghost to return home, bearing only a small token of hope to live for just a tad longer. Batman himself, however, takes his attention away from this young girl who could obviously use some help, but turns his focus rather onto the criminals that caused the suffering. This puts Batman right where the wiser people of his family warn him from: with his means and abilities, he has the opportunity of enriching the lives of the downtrodden, but opts out in favor of punishing the evildoers. Bruce Wayne is no wiser or better prepared in an important sense than Ghost is right now. His personal growth has been stunted, and there is almost a sense that he values this symbolic wallowing over making things better for not just himself, but the citizens of Gotham City.

Editor’s Note: This issue collects two digital-first chapters of the series. You can find the chapters of the comic digitally and help support TBU in the process by purchasing this issue for Comixology through Amazon or a physical copy of the title through Things From Another World.

Legends of the Dark Knight #8

The stories here are short, digestible, and are quick to the point, and well-told for their page count. I only wish that the artists had switched. The visuals in The Ghost and the Knight are crisp and intense and well-conducive to a Scarecrow psychological tale, while the somewhat simpler and emotional artwork in Healing would have done equally as well in the first tale.