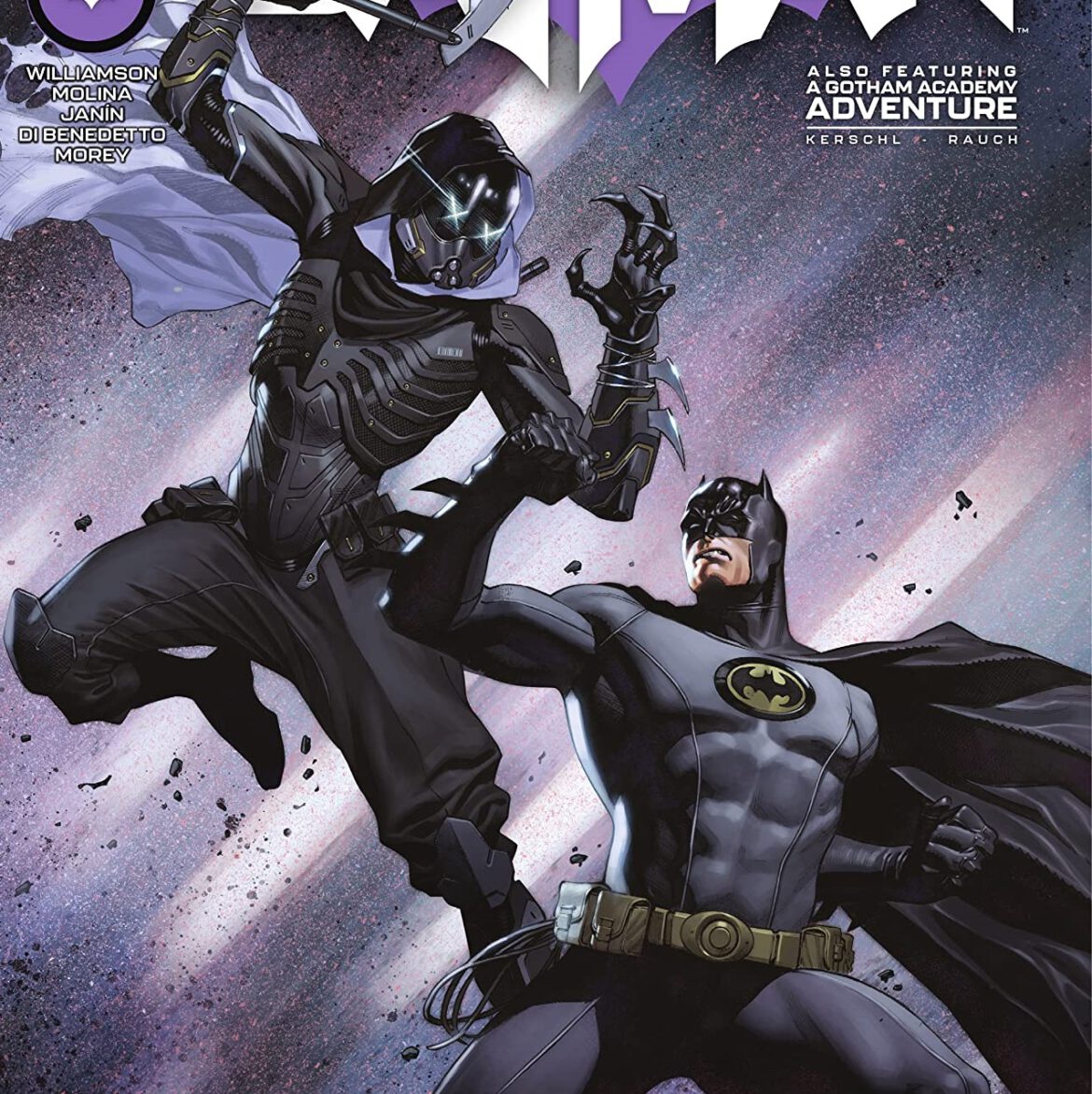 Today, in Badhnisia, Batman stands before Lex Luthor, who has just informed the Dark Knight that he funded Batman Inc. once Bruce Wayne could no longer afford to. Lex then tells Batman that he sent Batman Inc. after Abyss, further noting that he is fully cooperating with law enforcement.

Just then, a large police force emerges from behind Lex, and the squad opens fire on Batman. Batman takes them down quickly, doing his best to preserve the crime scene for Detective Cayha. After the battle, Lex and Cayha find a tied-up officer with a note on his chest. It’s from Batman, and it says “See you soon.”

Following a clue Lex deliberately mentioned about a very specific wine, Bruce arrives at Luthor’s Badhnisia getaway. The clue was for Ndari, a legendary winery that once sought to create a one-of-a-kind wine. Unfortunately, rivals burned the winery down, and in turn, the daughter of the winemaker destroyed her family’s enemies. Lex had the only remaining bottle, and he cracked it open for his dinner with Bruce.

After pouring wine for each of them, Lex dumps the rest on the table while he makes his offer. He tells Bruce that he’s gone through some changes and realizes that the world needs both a Superman and a Batman, but Batman can’t operate without the Wayne fortune. Lex proposes that the two of them team up, that Bruce let Lex fund Batman. As a sign of goodwill, Lex tells Bruce that Abyss’ body is at the police station, and it will soon be transported to a private Lexcorp lab where the two of them can analyze the body together.

At the police station, Detective Cayha argues with her chief about the removal of Abyss’ body. The chief is going ahead with it because of the sizeable donation Lex Luthor made, but Cayha notes that Luthor’s too close to this case. While Cayha and her chief argue, Batman steals the body.

The police issue a lockdown once they notice that the body is missing. Batman calls Cayha and tells her to direct the police to the roof, so he can have ninety seconds to examine the body. She does as she’s asked. When Batman opens the body bag, he notes that the body is way older than two days, and a nine-millimeter bullet to the head is what killed it, which isn’t a weapon any member of Batman Inc. uses.

The body coughs up a black substance, and then all goes dark around Batman. He changes his view, but he cannot see. Abyss attacks Batman, telling the Caped Crusader that he made Abyss. A slice to the chest with a scythe takes Batman out, and he awakens on the floor, bleeding profusely. Detective Cayha finds Batman, and she tells him that he needs to leave immediately before the police find him. Batman then tells her that he’s unable to as he can no longer see.

Analysis: Writer Joshua Williamson and the art team add another layer to the mystery of this Abyss storyline in Batman #119 by tossing a fake body and Lex Luthor into the mix. Luthor proposes to fund Batman in light of Bruce Wayne losing his fortune in the Joker War storyline, offering to work side-by-side with Batman.

Upcoming solicits tell us that Luthor will be donning his own Batsuit in the coming months, but the dinner conversation between Bruce and Lex offers another intriguing layer to this potential team-up. Lex has a rare bottle of wine made by a family whose winery was burned down and destroyed by a rival.  This family aimed to create something truly one-of-a-kind, and all that survived was one single bottle that Lex was happy to pour out onto the table. The subtext here is that Lex could be aiming to take down Batman from the inside. Much like the vintner lost his winery, Batman lost Batman Inc., and now Lex has his sights on spilling Batman’s blood all over the table (metaphorically speaking, of course).

Williamson’s characterization of Lex Luthor really steals the show this issue. Lex is suave and deliberate, as well as cold and menacing. The dinner scene between Bruce and Lex is the highlight of Batman #119, paneled beautifully by Mikel Janin. Colorist Tomeu Morey adds a beautiful and regal setting to Janin’s penciling, and the result is breathtaking.

Jorge Molina and Adriano Di Benedetto provide art for the rest of the issue. Together, all three artists do a great job of bringing their own unique styles to different aspects of this storyline. Equally beautifully is the darkness Batman finds himself within when Abyss makes his attack. The first confrontation with Lex at the scene of the crime is dark and very tense, albeit brief, as Batman dispatches the attacking officers effortlessly.

Synopsis: The backup in Batman #119, sees Maps Mizoguchi reading her journal entry noting the disappearance of a classmate, Lindsay Okamura. A car arrives, and it’s time for her to leave the academy and head home for a long weekend. After a big dinner party, Maps dons her Robin costume and heads out to investigate the Okamura house.

At the Okamura house, Robin investigates Lindsay’s room. It’s a mess, and Lindsay is nowhere in sight. Batman arrives and tells Maps that she’s breaking and entering. Batman orders Maps to the Batmobile, and the two drive toward Maps’ home when little creatures suddenly dart across the road. Batman stops the Batmobile and goes to investigate, only to get pulled down into the Gotham Reservoir.

Analysis: This story is told from the perspective of Maps, using her journal entry as a means to make everything feel so magical and imaginative. It’s fun, energetic, youthful, and unique. Maps’ narration is reminiscent of a fairytale, and everything feels so much bigger and grandiose through her eyes.

This is quite the departure from the main story, but if readers can get down with a more magical Robin tale, Karl Kerschl delivers a wonderful first chapter for one of the Bat-Family’s newest “unofficial” members.

Batman #119 is a solid issue overall. It’s not necessarily groundbreaking, but the storyline is enticing enough to keep interest as the creative team leads readers further into the depths of this Batman Inc.-centric mystery.