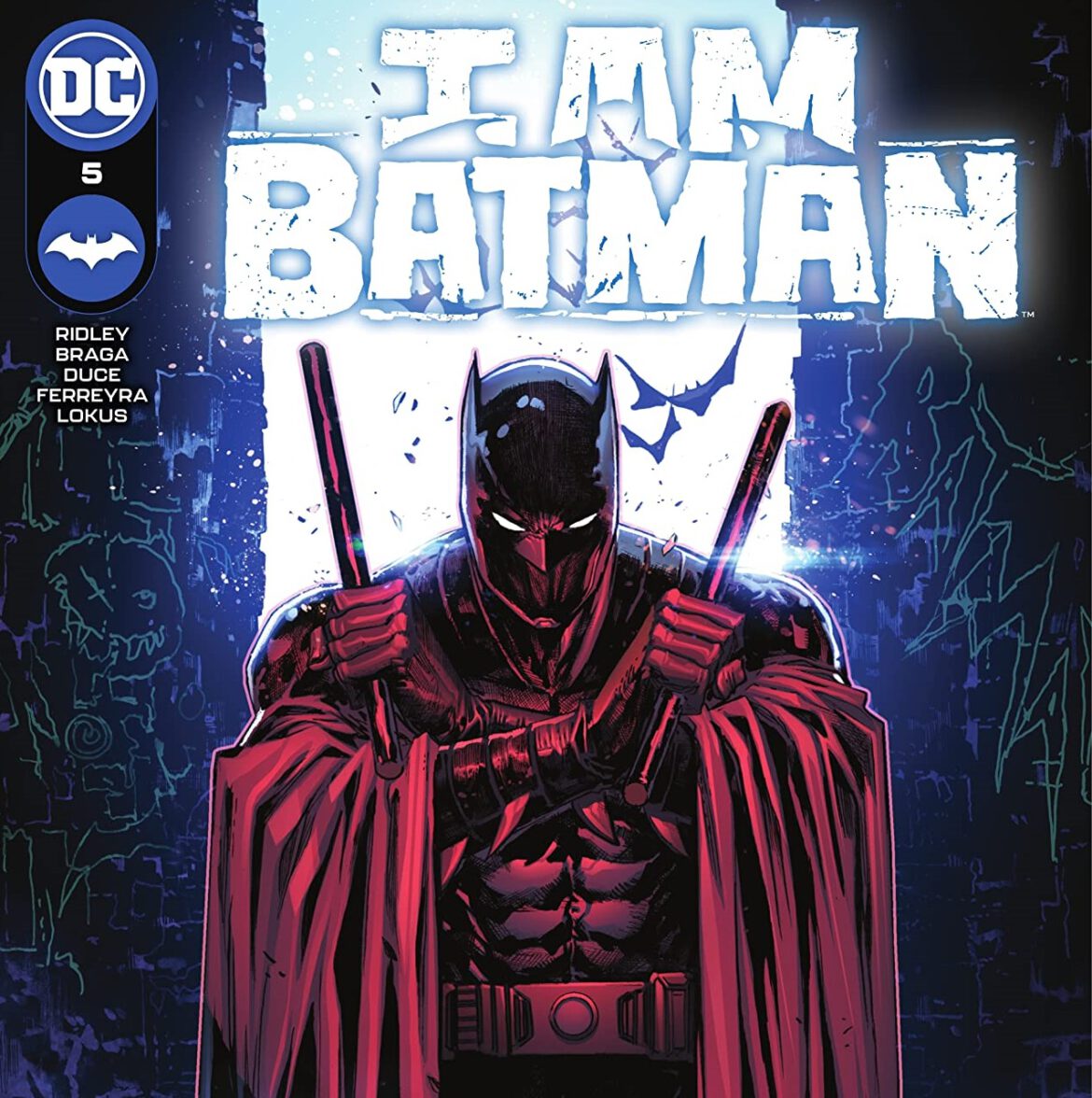 Overview: In I Am Batman #5, the Next Batman faces insurmountable odds against TALOS and receives help from unlikely places. The Fox family is reawakened, and significant changes are going to displace every member as the first arc concludes and a new chapter begins.

Synopsis (spoilers ahead): I Am Batman #5 begins with a brief flashback, as Tim Fox is being treated for wounds received during his work as a for-hire vigilante before he had returned to Gotham and donned the garb of the Next Batman. Vesey, his mentor, advises him to wake up to the difference between justice and revenge. This memory is short-lived as Vesey’s reprimand merges with current-day Vol’s plea to wake up.

Jace Fox, as the Next Batman, regains consciousness in the vise-like grip of the TALOS trooper which had attacked him in the previous issue.

Through a visual in TALOS’ face shield, Lucius Fox and Victor Noonan watch the confrontation from the safety of the government TALOS facility. Noonan praises the work of his project and assures Lucius that their goals are similar, if not equally, aligned and permits the TALOS trooper to finish the job. Lucius Fox watches on as, unbeknownst to him, the government soldier prepares to kill the son he has so recently reunited with.

As a second and soon a third TALOS trooper enters the scene, Jace, though swimming in a concussion, receives a message from Vol, reminding him of a stratagem used back in Vietnam. Destroying a nearby electrical panel, causing both an explosion and distraction, Batman takes the respite of a few seconds to regain his footing and his leverage against the formidably-armored mercenaries. Soon, the TALOS troopers are struggling from beneath a ton of bricks as Jace limps away.

Noonan, none-too-pleased with the failed demonstration, activates a hunt-and-kill protocol on the TALOS armor, and soon the trio of terror, now heavily armed with firepower, are on the prowl to take down the Next Batman once and for all.

Elsewhere in I Am Batman #5, in the hospital, Tamara Fox has fully recovered from her coma…..mentally. However, she is going to need a very long and intensive physical therapy treatment before she is fully able to function as before. Unfortunately, this hospital isn’t able to provide everything that would entail, and so it looks as if the Fox family will need to head to New York for the foreseeable future.

Batman trudges down an alley, knowing the TALOS will not be far behind, but the concussion is becoming unbearable. A concerned citizen, a friend of who Batman had helped not too long ago, helps walk him down a bit before being told to run. This individual, wearing what may appear to be the branding of the Royal Flush Gang, tells Batman that he and his will have his back before disappearing into the night.

Jace despairs at the situation he finds himself over his head in. He feels karma catching up to him, and he recalls the incident that led him down this tortuous path: at seventeen, he had hit a man with his car and fled from the scene and his family. Now justice may be ironically meted out by these TALOS troopers, the technology of which was designed by his own father.

Just then, TALOS is distracted by three armed men, the leader of which is the very man who minutes before had helped walk Jace down the alleyway. They open fire, and the TALOS troopers answer back with their own.

This selfless and fatally dangerous act of heroism realigns Jace with his courage, and soon Batman confronts his pursuers yet again. With his current injured state, and the overpowering technology of the troopers, Batman isn’t long in the fight, and soon the facemask beneath the cowl is knocked off, revealing him to not be the ‘real’ Batman.

Noonan commands the faux Batman’s death as Lucius recognizes his son’s face. Tim Fox’s father disables the TALOS armor, much to Victor Noonan’s ire, and soon the troopers are defenseless. Batman dispatches them in seconds.

In the epilogue, Jace and Lucius Fox spend a quality moment in the park during the day. Their bond is a little more cemented now that fewer secrets are held between them, though Lucius hints at some untold. Lucius admits he needs help and is going to seek therapy so that he can be the symbol to Gotham that he wanted to be along with being the man his family needs him to be. Jace is going to New York to see his family through. As for Batman….Gotham already has one. Lucius tells him that Jace is ALSO Batman and one that can represent not just his own legacy of past and future, but one that can represent in New York. Jace Fox removes the faceplate that reveals his skin color and in that act slips out from underneath the power of his family and the shadow of the Bat to become his own version of his best self.

Analysis: As we conclude our first arc in this series in I Am Batman #5, we reach the end of Jace Fox’s Fear State. His story was always of not being found worthy. Of his family, of his ideals, and of the Bat. His great crime and trauma had caused him to run away from everything he knew out of fear. His long absence was not only from training to become something that he might use to redeem himself but also the fear and realization of the rejection of his family. The faceplate was outward to hide the color of his skin, but it was also out of fear of not being taken as seriously as the original Batman, of not being able to prove himself worthy as the unintended heir to the mantle.

Up until now, the issues were mostly Jace-centered issues. I Am Batman #5, however, feels more like a Lucius Fox take. While Jace is of course in the battle for his life and deals with his baggage, this story is about Lucius’ realization of the man that he had become; someone who was on the path to creating a monster instead of the inspirational beacon that can uplift Gotham City. With his push for control, he had also been pushing away his morality and his family. His own son, the prodigal who had left through cowardice and crime, is now fully redeeming himself as the Batman, and he had never even suspected it. He had just seen Jace as an entitled and unworthy business associate as of late; meanwhile, it’s been revealed that he’s been hitting the streets and trying to clean them up in his own way.

Lucius Fox, alongside the militaristic Victor Noonan, had been perfectly willing to observe Batman’s death. The Batman, whom Lucius himself had aided with his genuine help over the years, was now just a mask to be taken down as the symbol of rot in this city. Something that needed to be eradicated.

The removal of the faceplate, for this reason, was doubly important.

For Jace, it was important because despite having usurped his suit, he wasn’t THAT Batman, and now everyone knew it. He hid behind someone else’s identity in a similar manner that he ran from justice as a young man scared for his future. Now fully exposed as his own Batman, and having ‘disarmed’ his opponents, he can truly fight back on his own terms, in his own way. He now must continue this path in a city of his own making and molding

For Lucius, it was the removal of a cold and controlling initiative. That symbol had long ago lost its meaning for Lucius of hope and healing but was rather of fear and intimidation. With the removal of the faceplate, it was not only the exposure of his son’s face, but also of the humanity contained within that dark armor. The TALOS armor protects the wearer and enforces control over the victims. The Batsuit not only protects Bruce or Jace or whoever happens to wear it…it also stands to protect Gotham City and ward off the evil, much as a gargoyle protects the inhabitants of the building it faces out from while warding off any offenders.

With everything that had taken place in the Fear State storyline, and with this series, in particular, this wrap-up in I Am Batman #5 feels a bit rushed and dismissive of the calamity and clean-up Gotham City’s citizens are dealing with. While the other Bat-titles had moved on from the carnage in a closed-door sort of way, I had appreciated that this title was dealing with the aftermath and uncertainty that would naturally and organically continue from such a traumatic set of circumstances city-wide. But according to this epilogue, it seems that I Am Batman, too, will be refreshing itself in a completely different piece next issue.

However, insight and progress did happen to surround our hero and those he loves, and this bridging between father and son serves as a stepping stone to something perhaps of greater importance to the legacy of Timothy ‘Jace’ Fox.

The journey of the Fox family continues to be thoughtfully told and beautifully illustrated by the creative team, and even with what I feel is an abrupt departure, I continue to look forward to where this book takes us.