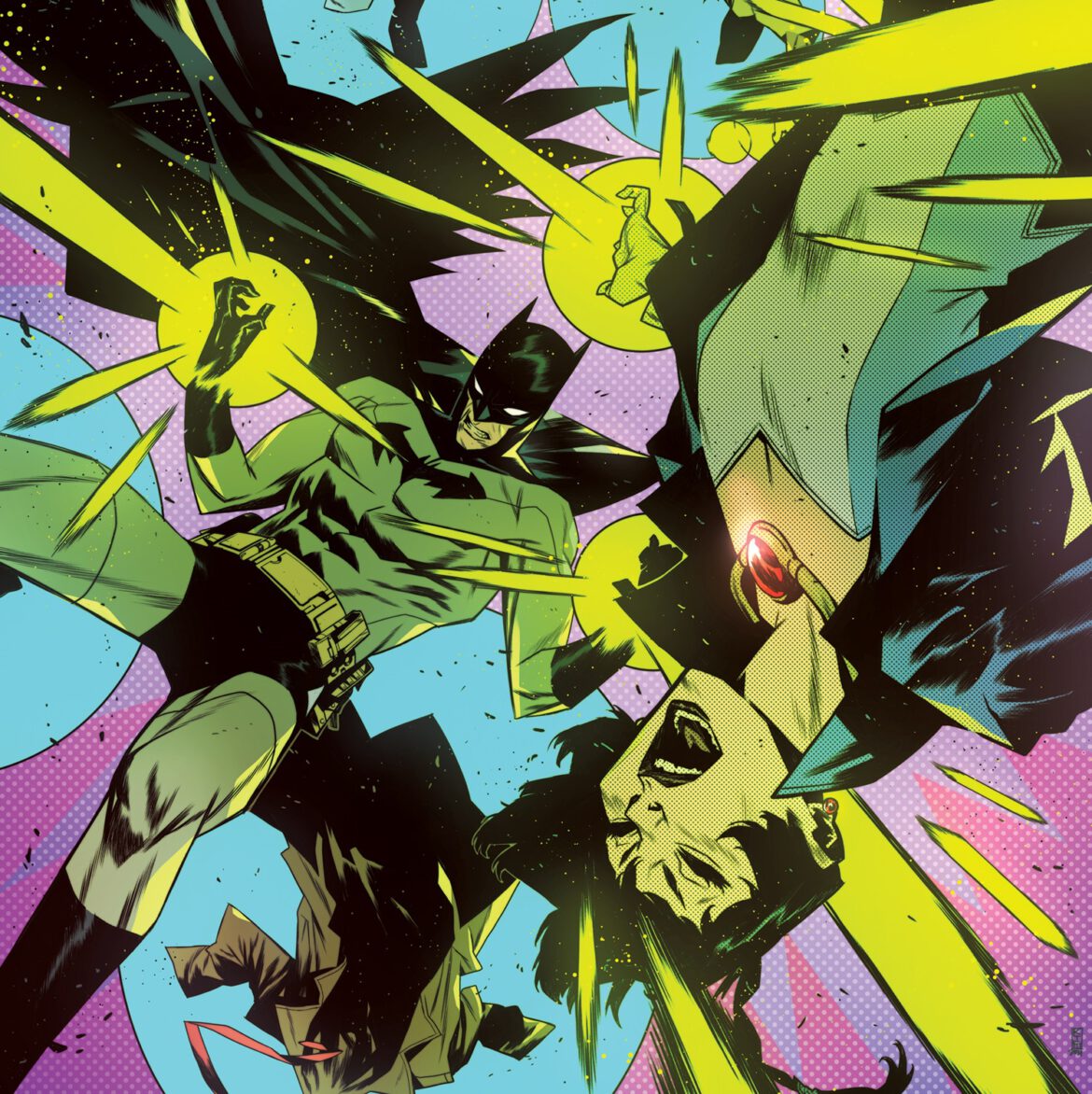 Overview: In Batman: Urban Legends #13, Batman, John Constantine, and Zatanna work to undo what they beset upon the world, Wight Witch’s origin comes full circle, and Ace the Bat-Hound works to save Batman.

Story #1: Batman and Zatanna in “Bound to Our Will” Part 3 by writer Vita Ayala and artist Nikola Čižmešija

Synopsis: The first story in Batman: Urban Legends #13 sees a retrospective that covers several points in the life of “Jacky Day” life from childhood to adulthood. He is the unfortunate soul who is transformed into Eos by Celeste. The scene switches to the safe house, where Zatanna, Batman, and John Constantine discuss the situation. It’s explained that their magic permitted something sinister to escape its magical boundaries.

Analysis: This story is not improving with time. The dialogue between Zatanna, Batman, and Constantine is childish, and the sexual tensions are maudlin and poorly executed. The backstory jumps around too much, and again I find myself lacking the willpower and interest required to try and keep up. The plot itself is about as standard as it gets in occult/mystical narratives: Heroes travel to magical realm. Heroes are attacked. Heroes flee. In the process they let something dangerous through. Heroes must battle “Dangerous Something” and return them to the magical realm. (Wasn’t this the plot of the Dr. Strange movie??)

Of course, there’s not much that is truly original in comic fiction in general, but well-worn stories need to be told expertly to feel fresh. This arc falls short thus far.

Synopsis: The second story in Batman: Urban Legends #13 sees Wight Witch, Rhea Sinha, putting the pieces together. She remembers falling in love with a fellow soldier, who is Minkhoa Khan (Ghost-Maker). They are on a mission that goes bad. Sinha sacrifices herself to save him. She awakens in some kind of capsule tube, and she hears the conversation outside referring to her as an excellent candidate for the “Thyssanus Cloning Program.” She struggles to put together the pieces of her puzzle until she remembers attacking Ghost-Maker. He says her name and everything changes. She slaughters a number of guards until Simon Saint appears and orders her to kneel. She complies but smiles. When Saint asks her why she is smiling, she informs him that he is already finished. Bit by bit, she is recollecting her memory, and she warns him that eventually she will kill him.

Analysis: This story has really grown on me, and the three-part structure delivers a tight finish to this compact narrative. (Really, I think the six-part story format is a disaster for Urban Legends and is probably the single biggest impediment to a better book). Ram V is a stunning writer, and I love the connection between Ghost-Maker and Wight Witch. I hope this is not the end of their run as I would be fascinated to explore more of their relationship and its implications for Gotham and the remnants of the Magistrate.

Synopsis: The next story in Batman: Urban Legends #13 sees Ghost Hannah and Freeman go downstairs to ask the landlord where Regina is. He dismisses them. At the morgue, Freeman explains to Ghost Hannah that he only has a few hours left to solve her murder. He does so out of guilt because when he died he went to an “in-between place” with his father who died at the same time. But he was forced to leave his father behind when he returned to the land of the living.

He touches Ghost Hannah’s hands and receives a vision of the landlord murdering Hannah in her tub. The police arrive to arrest the landlord. Later, Regina shows up in Freeman’s apartment and tells him he has the wrong man. She tells him that years ago, the landlord murdered his wife. Regina walked in on him immediately after the murder and then he killed her too. He buried them together under the floorboards. But they began to awaken as a dual entity and eventually the wife became able to possess. She possessed the landlord and murdered Hannah so that he would get caught. As Regina finishes her story, a bald man in a dark suit and tie arrives, touches Regina, and both Regina and the ghost of the landlord’s wife dissipate.

Analysis: The ending feels a bit flat. The story feels more like a Law & Order episode than something in the Batman Universe, although perhaps that is the point? I appreciate writer Mashigo’s restraint and well-sequenced narrative, but I’m not sufficiently interested in Eternity to follow the character from here.

Synopsis: The final story in Batman: Urban Legends #13 is at Club Siberia, as Mr. Tarkov proceeds downstairs to inspect “the package.” He flashes back to a visit to Minsk as a young boy and reflects, as the son of a poor carpenter, on the value of craftsmanship. The package to be inspected is a trussed-up Batman. At the Gotham Pet Cemetery & Crematorium, Schwann is astonished by the breakout and sends a henchman after them with the assistance of “Licks Luthor.”

Mr. Tarkov wears some kind of transparent facial prosthetic and indicates that he wants to see who is under Batman’s mask. Several thugs fare poorly in their efforts to avoid the mask’s built-in defenses. Katarina Tarkov then gasses Batman into unconsciousness to prepare him for auction.

Back in Gotham, Ace and his team return to the old Romanov Hotel and search for clues as to Batman’s fate. While they search, Mr. Tarkov tells an old story he attributes to Tolstoy about a lion in a zoo and his friendship with a puppy. Schwann’s men, led by Licks Luthor, locate Ace’s team.

Analysis: I like Ace the Bat-hound well-enough but still think it’s astonishing to give the story six parts and this many pages. The Tolstoy story takes up a lot of time and space, and it’s puzzling for writer Mark Russell to inform the reader that the story has no moral at all and is meant merely to “catalog human suffering.” Why are we reading it then? What function does it have in the story? To prove that Mr. Tarkov is a villain? I think we know this already.

The Batman-Zatanna-Constantine story is subpar and unfortunately has three parts remaining. The six-part stories in general are really dragging down the quality of the book. Ram V’s tight, nightmarish three-part story proves the point and is a real gem in the book thus far. More Ram V, please!