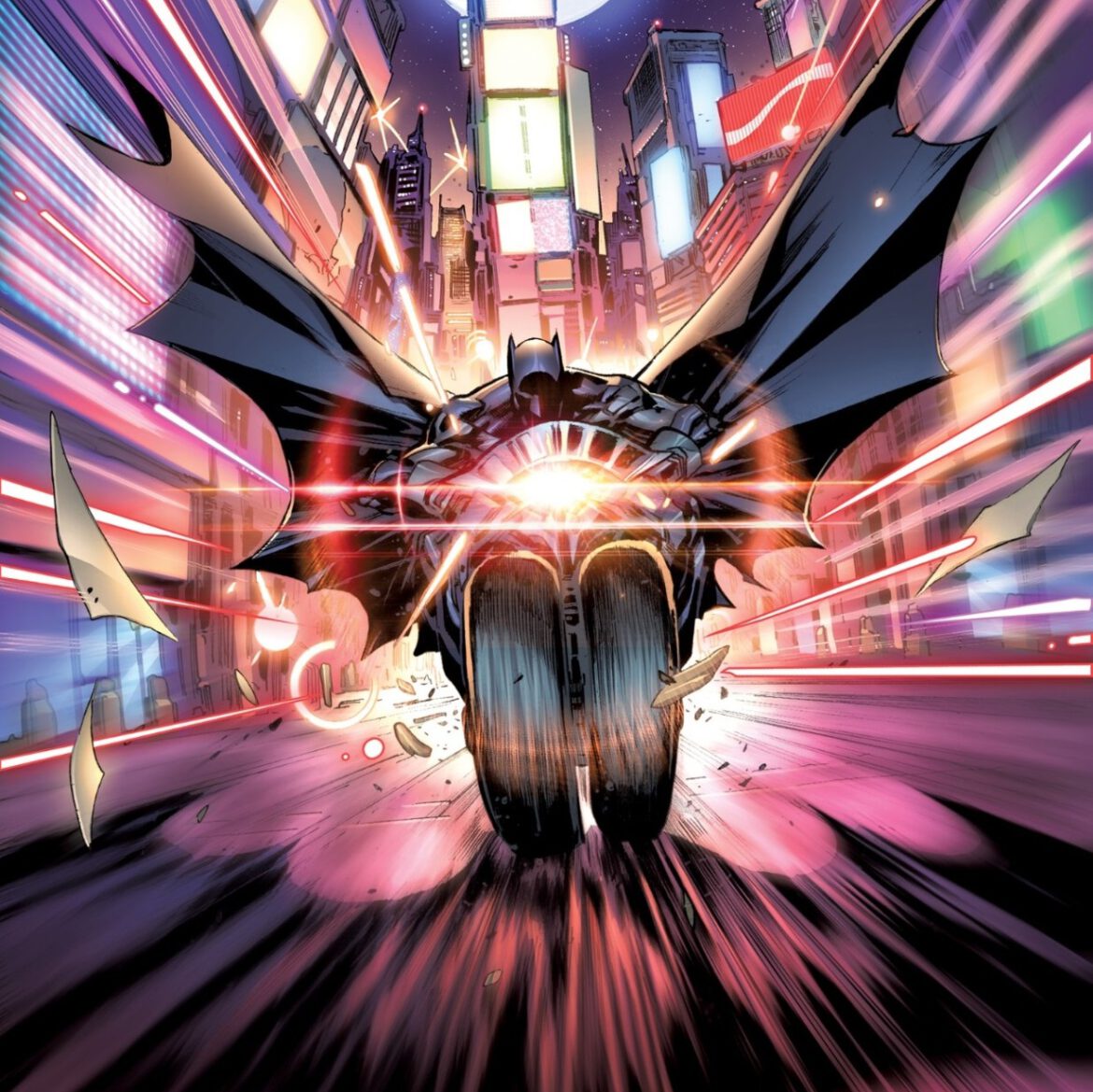 Overview: In I Am Batman #7, Batman begins his investigation of the death of a philanthropist that may not be who he seemed to be. The rest of the Special Crimes Unit brings down a weapons distribution scheme.

Synopsis (spoilers ahead): This chapter in I Am Batman #7 opens with a press conference with Commissioner Becket. What started out as a briefing of the Devin Rubel murder investigation quickly turned into questions about the team dubbed “Strike Force Bat.” The commissioner abruptly ends the press conference.

In Lower Manhattan, Detective Chubb brings the Rubel case to Batman. Batman tells the detectives that he will not investigate the murder. Chubb protests, but Batman is more concerned with the things that are happening all over New York. Dealers are dumping guns in the city and a gang war is erupting, causing innocent deaths in the crossfire. He will not place the Rubel case as a priority because the victim had money.  Chubb’s reaction is to blame Batman for the brutal murder in that he attracts the crazies. Whitaker suggests that the unit take on the gun runners to allow Batman to conduct the Rubel investigation. Batman agrees, and Whitaker points him to Rubel’s head of security.

Batman leaves, and Chubb and Whitaker are alone. Chubb is not happy with the team that they have; one is a trigger-happy cop and another has had HR problems. Whitaker tells her that she is their leader, and they will follow her wherever she leads.

A short vignette shows Tanya speaking with the mayor and the deputy mayor. We switch scenes to Jace and Vol investigating Tyron Burrows. Vol is able to track Burrows’ bike on the internet. Batman can find his man.

We switch to the police. Chubb is preparing her team to raid the gun runners. Batman has told them that there are only six runners. Chubb, who does not trust Batman, decides to be the first to enter. She will soon know if she can trust this mask.

Tam and Tiff discuss Tam’s rehabilitation as well as the state of the rest of the family. We learn that Tiff blames herself for Tam’s injuries.

In Queens, Batman finds Burrows and pursues him.  Burrows tries to fight Batman and fails miserably. Batman easily takes Burrows down but, he does learn that Rubel may not be who he seemed to be.

The raid goes down while Jace and Vol discover that Burrows was right about Rubel. Batman contacts Chubb to give her his update. Chubb says that Batman’s intel was correct. For his part, Batman apologizes to Chubb, Burrows is not the killer, and the Rubel investigation is proving to be more complicated. He should not have passed judgment. This surprises Chubb, and readers see her smiling for probably the first time. Whittaker approaches her, and she just says that everything is fine.

Batman, following his latest lead, breaks into a condemned building. He discovers some pieces of sick “art,” but that is not all. It looks like the Rubel killer is named Manray, and he is looking at creating some more art.

Analysis: The art is the usual style that we see in the DC books. I do want to highlight the moodiness that Christian Duce creates here in I Am Batman #7. The backgrounds in the abandoned building are drawn very dirty looking. This building really looks like it is abandoned and dark. Batman uses a flashlight to see, and the coloring makes it represent light in a realistic way.

This is proving to be a book that depicts violence in a graphic way. The art in I Am Batman #7 shows a lot of blood loss with the blood pooling around the victim’s bodies. This gives a realistic look to the scenes, and I do not feel that the violence is being glorified in any way.

This story is more of a group of character pieces. We see more of Batman’s motivation. He is more concerned with the average citizen of New York. He is willing to ignore a sensational crime in order to focus on what he is in New York to do, help the marginalized and innocent citizens of New York.

This story also delves deeper into Detective Chubb. She does not see herself as a leader. She tells Whitaker that she is just a beat cop who only got a detective’s shield because of slim pickings after the Joker War in Gotham. When it was easy to get rid of her, Gotham did by sending her to New York. Now she sees herself as leading a group of misfits in a circus outfit. This thought is shown to be the general consensus of the NYPD when they are called Task Force Reject. Throughout this story, Chubb is learning that she can trust Batman, and this may develop into a trusting friendship.

I Am Batman continues to be gripping. Not everything is as it appears to be, and I suspect that characters will be changed when this is over.