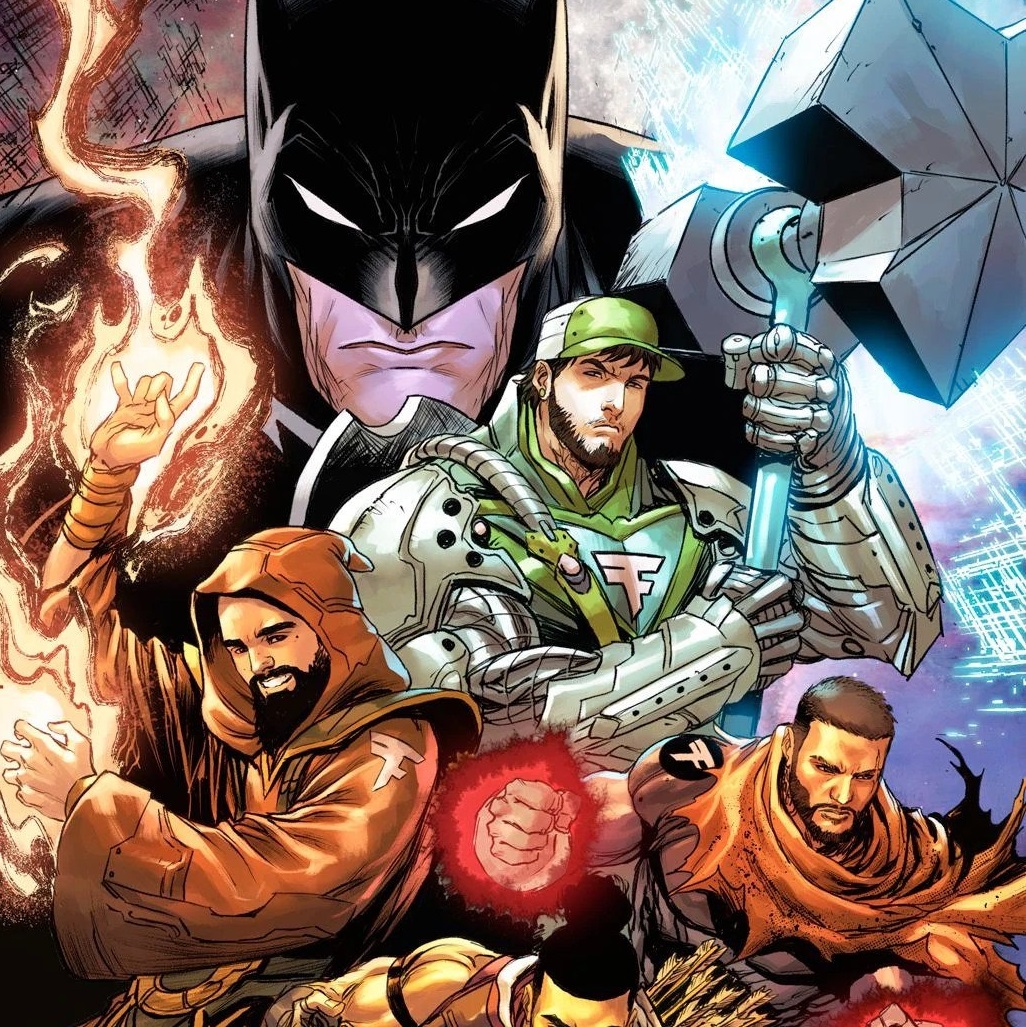 Overview: In Batman/FaZe Clan #1, Batman and the Faze Clan team up to stop some of Batman’s greatest villains.

Synopsis (spoilers ahead): Batman/FaZe Clan #1 begins with Batman and Robin at the Batcomputer talking about a new gaming console that is controlling people and causing them to commit crimes. It’s called Nygmabox (based on the Riddler’s name Nygma). Robin suggests they ask the FaZe Clan for help.

They arrive at the FaZe Clans headquarters and ask Banks, Rain, Apex, Rug, and Temperrr, if they know anything about the Nygmabox. They say that some of their team members logged on and haven’t logged off. Batman says that the only way that they can take down the machine is to destroy it from the inside and he asks the FaZe Clan if they’re up to the task to defeat the Riddler.

Then we cut to the Clock Tower where we see Oracle setting up the Nygmabox to counter the mind control. Then Oracle says that there are other types of ways the Riddler can hurt you besides mind control. So they are going to go with Batwoman, Nightwing, Robin, and Batwing. They greet each other and put their VR headsets on to go into the game.

They come to an empty server that the Riddler made for them. To make the mind-controlling stop they first need to get four tokens. In order to get a token, they have to face off against Batman villains in battle including Two-Face, Mr. Freeze, Scarecrow, and the Joker. Since the FaZe Clan are just people Oracle sends in code to change them to different game classes such as a healer or an archer. Oracle tells them that the villains will fight with their lives to protect the tokens that they hold, so if they die, they will also die in real life. To have a better shot in battle, they bring in two more members of the FaZe Clan to help with Blaze and Adapt.

Then it jumps over to Batwoman and Rug facing Mr. Freeze. Mr. Freeze is fighting his hardest as Rug is blocking his attacks with a shield. Rug finishes him with a blow to the head with a hammer while being a tank class.

Then they go to Arkam Asylum and meet Scarecrow. Batwing feels the fear taking over him so Rain, being an archer, makes a trick shot into Scarecrow’s eye killing him. And with that, the team now has their third token.

Finally, Temperrr and Nightwing fight Joker. Adapt on the computer says how there are clones of him in a mirror maze and he sends in a heartbeat sensor to help them find the real Joker in the corner camping. Then he jumps on the Joker’s head and kills him which gets them their final token.

After this, Oracle gets hacked by Riddler which stops her systems leaving FaZe Clan by themselves. The team gathers up on a roof looking for the mind control device. They find a seventy-five-foot-tall Riddler shouting a riddle at them. He declares that in his game, they don’t have powers and then takes away their abilities. Banks says that they are not alone as a horde of fans and Bat-Family members come running at the Riddler. He gets taken down and they leave the game.

On the next page, Alfred tells Batman that he has been down in the cave for days and he hasn’t been going out to fight crime. On the final page, the FaZe Clan is having a pizza party and talking about if Batman likes them. They head over to the computer and see a video game friend request from Batman.

Analysis: Batman/FaZe Clan #1 may be an odd comic for Bat-Fans. It introduces a gamer group called FaZe Clan. For people who haven’t heard of FaZe Clan before, it’s a group of gamers who play different shooter games like Fortnite and Call of Duty, as well as Counter Stike earlier in the group’s existence. They have been around since 2010 and have been doing trick shots and playing games since then.

If you are reading this on a Batman website, you probably are well aware of who the Joker, Mr. Freeze, Riddler, Scarecrow, and Two-Face are. I won’t take the time to explain that. You probably also know who the members of the Bat-Family are that are featured including Batwoman, Batwing, and Nightwing.

Overall, for a comic that is a gateway for video game fans to get introduced to comics, this works out as best as expected. It isn’t great and the plot does what it needs to. Ultimately, it feels like it is written for a very young audience and acts as a showcase piece to have unfamiliar fans get acquainted with the Batman Universe. Batman/FaZe Clan #1 is serviceable at best.

Probably the most interesting thing coming out of the comic is that Batman ends up being a gamer. As a gamer, it’s a cool connection, but probably completely untrue given the lack of time Batman typically has.

When this comic was announced, I was wondering whether it would be good or not, but it turned out to just be good. I liked the plot and like how they included the Faze Clan in a way that worked within the comic.