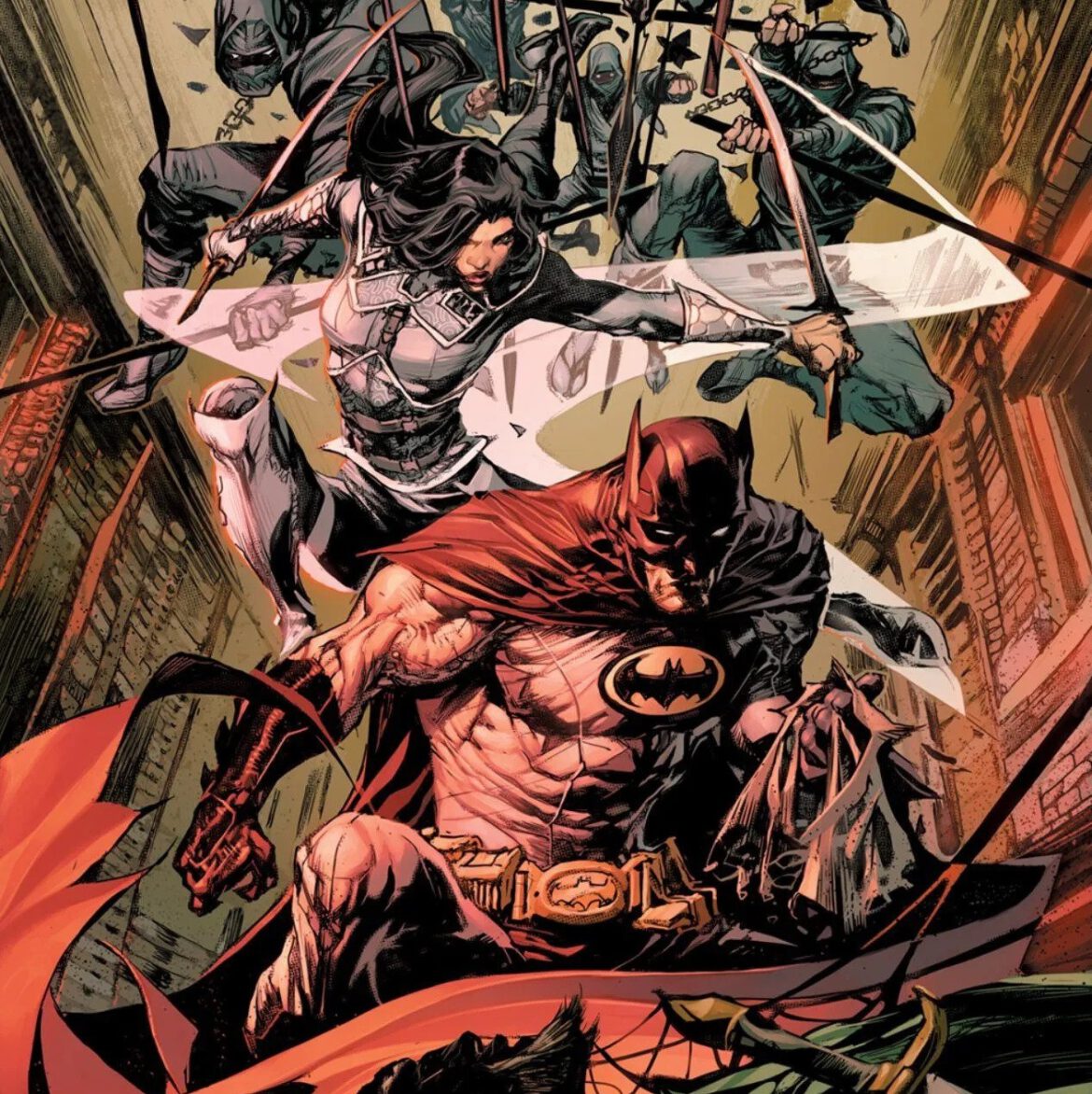 Overview: In Batman #122, the Shadow War continues with Batman investigating Ra’s al Ghul’s death, and Robin teaming up with Ravager to take down Deathstroke.

Synopsis: Batman #122 begins in the past, as Deathstroke stands before the ruins of a playground in a desolate city and vows revenge.

In the present, after the assassination of Ra’s al Ghul in the pages of Shadow War: Alpha #1, Batman investigates the crime scene with D.E.O. head Cameron Chase. He pulls up a digital recreation of the assassination, then asks Chase how Deathstroke managed to get past all security and satellites. Chase, gloating at the idea of knowing something Batman doesn’t, leads Batman to a giant tunnel outside of city limits.

The tunnel is huge, and it would require a very large machine to dig it. Chase tells Batman that the tunnel leads all the way to the crime scene. Batman notes that it took him seven seconds to get to Deathstroke’s location after Ra’s was killed. In that time, Deathstroke could have killed anyone he wanted. Instead, he shot Talia but only to wound her. Batman surmises that Deathstroke missed on purpose.

At Deathstroke’s lair, his Secret Society is under assault from ninjas. Angel Breaker and Detonator lead the League of Assassins in a siege of Deathstroke’s base. In the maelstrom, Prometheus abandons Deathstroke, leaving Slade to escape with his son, Respawn. The two make it out of the building just as it blows up.

At a bar, Ravager downs a drink while mulling over the awful news that Deathstroke assassinated Ra’s al Ghul. Robin (Damian Wayne) arrives, telling her that he needs her help. Ravager tells Robin to stow it, instead ordering him to help her kill her dad.

In Nepal, Batman fights his way into the House of al Ghul and confronts Talia. He accuses her of hiring Deathstroke to murder her father. She refutes Batman’s claim, telling him that she was aware of Deathstroke’s army, but she had nothing to do with Ra’s death. The two talk about Damian, but suddenly, Talia keels over. She’s in pain. It’s her gunshot wound.

When Batman asks Talia about using the Lazarus Pits, she tells him that she doesn’t trust the pits right now. Batman expresses concern for her injured state. Slowly, the two embrace. Then, they kiss.

Analysis: This second part of DC’s Shadow War event sees Batman investigate the crime scene, deduce that Talia was left alive for a reason, and then travel all the way to Nepal to accuse her of murdering her father. It’s certainly some kind of detective work, but it feels sloppy and ill-conceived. Instead of figuring out what kind of device could bore a gargantuan tunnel beneath Gotham City without alerting anyone with noise or vibrations, Batman jumps to a conclusion unrelated to his investigations at the scene and flies off to another country.

When you think about that for a few seconds (perhaps the seven seconds Deathstroke had to injure Talia), it makes Batman’s detective work seem pointless. It also clearly feels like a not-so-clever way to force a reunion between Batman and Talia al Ghul. When the two reunite, at first their reunion is more adversarial. Yet, when the pain from Talia’s healing wound becomes unbearable, Batman shows the slightest bit of tenderness, and suddenly the two former lovers have dropped their tit-for-tat argument and are embracing and kissing once again. Say what?

Meanwhile, Prometheus abandons team Deathstroke, which if readers have also been picking up Deathstroke Inc., this might mean something. If people have just been reading Batman, this betrayal means nothing, though it does serve to isolate Deathstroke and Respawn, as they are forced to go into hiding.

Lastly, Robin seeks out Ravager, who corrals him into helping her kill her father. This scene stands out because it illuminates the rough art seen throughout Batman #122. In the big, half-page panel where Robin and Ravager reunite, Robin assumes a stilted stance that highlights his bizarre proportions. The top half of his body appears larger than the bottom half as if he’s leaning toward the reader. Yet, his stance also makes it look like he’s about to ask Ravager to join him in a waltz. It’s odd, and much like the shoddy plotting of this issue, takes readers out of the book.

As mentioned earlier, this is but one issue with the art in Batman #122. Readers see something similar with Batman and Talia al Ghul as well. Particularly in the nine-panel grid where Talia and Batman reunite, their facial features twist and morph in bizarre ways. It looks like artist Howard Porter was trying to go for a shadow effect, but with the coloring by the typically beyond-exceptional Tomeu Morey, the effect makes it look like both Talia’s and Batman’s faces are contorting in inhuman ways. At one point, it looks like Talia is transforming into a werewolf.

While there definitely are moments of beauty, particularly with that final full-page image of an unmasked Batman and Talia kissing (with Batman’s cowl reflected behind him), these art issues give the overall book a lackluster and sloppy appearance. Paired with a story that doesn’t make much sense, Batman #122 is a disappointing read.

Synopsis: Batman meets with Commissioner Gordon, who tells him that there’s a hit on Robin (Dick Grayson). Batman tells Gordon that he’s been dealing with it, though he’s found no leads on who put out the hit.

As Deathstroke pulls off his mask, it’s revealed that Slade has green eyes and a ghoulish grin. Slade also can’t stop laughing.

Analysis: The action between Batman and Deathstroke in this backup story looks good, but there’s really nothing here. After readers learn that a hit was put out on Robin, the story quickly fills the rest of its pages with Batman and Deathstroke punching each other. There’s a tease of Joker’s involvement at the end, but there isn’t much more to chew on that makes this backup either memorable or interesting.

Batman #122 is a nonsensical and sloppy “part two” to the Shadow War event that serves mostly as a way to force Talia al Ghul and Batman to kiss and make up. Literally.