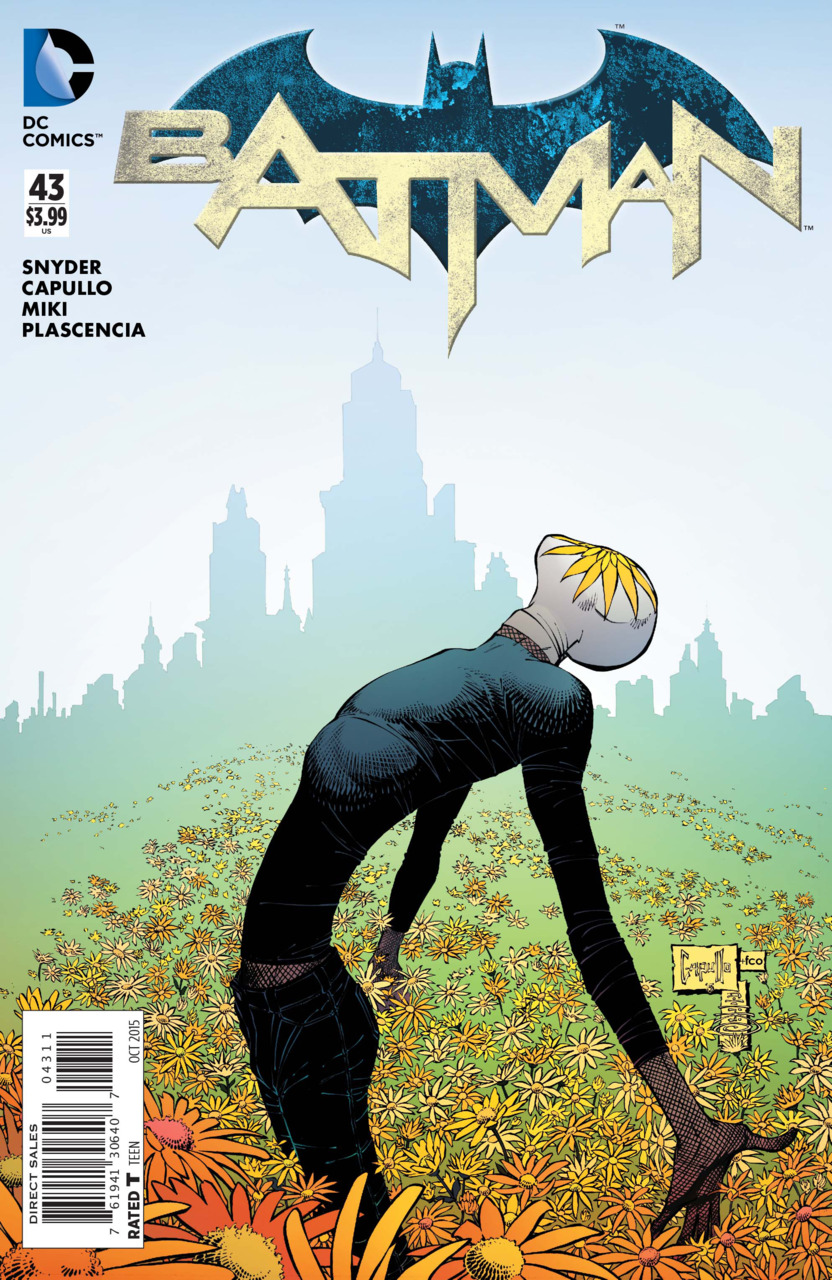 I’m not sure if you read my review for Detective Comics last week, but I talked a bit about what separates the good comic runs to the great ones. The good comics are something you are enjoying right now. The great ones are something you will still love ten years from now (or longer). The reason those great comics stick with you, is because they have a certain magic to them. They bring a heart to the character that you can’t fake.

Snyder and Capullo are doing just that. They are making “good” run into something “great”… something legendary. These guys are reaching a new level of awesome. They are cutting right to the heart of Bruce Wayne, as a character, and showing us something we’ve never seen before. Bruce not NEEDING to be Batman. Bruce not WANTING to be Batman. And that seems like something I would have a problem with. But think about it; this is a character who has suffered for seventy-five years… I’m going to be happy for him. He deserves it. And if he comes back as Batman someday (and let’s face it, he will), and suffers all over again for another seventy-five years, then great. But really, a part of me wants to see this. I want to see Bruce happy, have children, live that beautiful life that Alfred imagined for him at the end of Zero Year. Let Dick come back as Batman… That’s my ideal situation. But that’s probably not going to happen. Because Bruce is a character who you know will only end in tragedy. And that makes these moments of happiness that much more memorable, enjoyable, and in the end – more heartbreaking.

We open with Mr. Bloom talking to an unknown person – we will find out who at the end.

Gordon is talking to Bruce at the shelter, right where we left him. Gordon tells Bruce that he is the key to Batman. Most of the tech from the new batsuit is from Wayne Tech, and he just wants some help from him, as Jim seems to be loosing faith in the system – or at least doesn’t trust Powers. Bruce rejects his offer, and is growing more frustrated when Gordon puts Mr. Bloom’s seed in his pocket and leaves.

Alfred and Clark (Superman) are spying on Bruce. Clark doesn’t believe it’s Bruce, but Alfred assures him that it’s him. We flash back to Alfred trying to talk himself into destroying everything in the cave, when he gets a call from Julia – she’s found Bruce’s body. She placed it in a body bag, but as she was zipping it up, Bruce came back. He was dead, but his body – his brain – healed itself thanks to the Dionesium. But it’s as if he has a new brain. He has no memory of his past life. Alfred explained everything to him, but with no memory of it, Bruce no longer has the drive to be Batman. He couldn’t bring himself to do it. Then Julie Madison came to check on Bruce.

Clark wants the old Bruce back, and when Alfred passive-aggressivly threatens him with a Kryptonite ring, he asks if Bruce had a backup plan like he always does. That’s when Alfred shows him Bruce’s cloning machine. Except he never finished it, but explains that his goal was to always have a Batman for Gotham. It’s here that we get an awesome spread of alternate Batmen fighting in different worlds and time periods. Alfred asks Clark to leave him be. To let him be happy. And to co-sign on everything to be burned away in the furnace.

Gordon is supposed to be at a Powers’ event, but it sneaking through the Devil gang (I don’t remember their name) instead. He cracks a Spider-Man joke, is scared by a shark with devil horns, gets caught by the gang, and starts a shootout – nailing a dude in the crotch. The leader keeps awake, and drops Gordon into a furnace. Julia tries to help, but is knocked unconscious before she is able to do anything.

Back at the shelter, Julie wakes Bruce up from a stuper. They go home together, and Duke Thomas sneaks in, and takes the seed that was left by Gordon.

Mr. Bloom is meeting with Penguin. Penguin has Mr. Bloom shot, and takes the remaining seeds to sell to anyone willing to buy it. As they leave, Mr. Bloom recovers from his headshot, and stabs everyone in the room, including Penguin, with his long, pointy fingers. Whaat?! Hope Cobblepot doesn’t die.