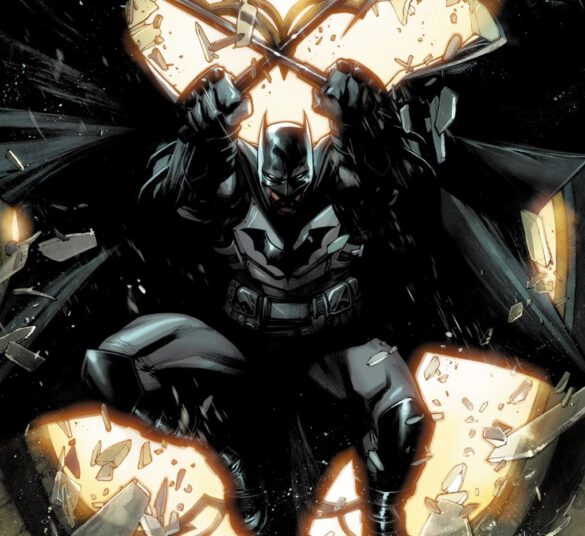 Overview: In I Am Batman #8, the Next Batman (Jace Fox) comes face to face with a villain who truly terrifies him.

Synopsis (spoilers ahead): Part three of “Empire State of Mind” found in I Am Batman #8 opens with Batman facing off with a villain who wants to make something beautiful. During the initial back and forth, the criminal tells Batman (Jace Fox) that he is inspired by him. Tired of this conversation, Batman strikes the murderer in the face with his baton, but it appears to have no effect. The battle quickly turns to the criminal getting the upper hand with his homemade spike iron wrecking ball. Batman makes a hasty retreat and calls Chubb, who is at the mayoral press conference announcing the seizure of the weapons traffickers.

Batman, wounded, calls for backup. He tells Chubb to bring tactical, but the perp got away. Later at the Fox Family condo, Jace is talking to Lucius about the night. Jace realizes that he is against pure evil, and he does not think he can combat this. Lucius suggests upgrading his arsenal, which Jace is against. He does not want to escalate the situation like he feels Batman did in Gotham.

Commissioner Becket is in the garage, ready to leave for the night, but he is not alone. He is kidnapped by the murderer and asked if he is ready to get beautiful.

There is an interlude where we watch Jace working out. He is interrupted by his little sister who threatens him with a sparing match. Jace tries to chase the girl away by asking her to go hang with Tam, their other sister, and then with their mom. Mrs. Fox is opening a transition center for formerly incarcerated women to give them job training. This surprises Jace, and the girl just says that their mom is using their dirty money for good work. Jace scoffs at the dirty money comment. He tells his sister that the money is just a means to an end, but right now he believes that he might have been wrong.

The second interlude involves a meeting with Vol and Hadiyah. Vol is worried about Jace and wants the woman to speak to him. Hadiyah tells Vol that she is still trying to fix herself, but she is still around for Jace.

We switch scenes to the horrific torture of Becket. Becket is hoping that Batman will come any second, but that’s not the case. Vol is talking to Jace, except Jace is not listening. The conversation shifts from a new base to Hadiyah. The conversation is interrupted by Chubb. They have found a new mutilated body. This time it is worse than the first, and it is Commissioner Becket.

It is learned that Becket was a misogynistic, racist homophobe. It is surmised that Rubel, the first victim, a sex trafficker, and Becket being a racist were among other traits were targeted by this murderer. The perp is inspired to go after people who think they are above the law. The killer’s definition of going after them means killing them.

Analysis: The subject matter of this story found in I Am Batman #8 is very adult. The cover rates it for ages thirteen and up. I personally feel that this deserves to be a Black Label story. It is not that it should not be told, but it should be in a more adult-oriented label. The subject matter is mature, but so is the art.

The art is very graphic. Some scenes are cleverly censored with a well-placed speech bubble or text box, but not all the scenes. The panel showing the torture of Becket is graphic. We see that his leg and several fingers have been amputated while the victim is conscious. The way that Becket’s body is displayed for the police is muted but still graphic in its presentation.

On a more positive artistic note, the panel showing Batman smashing through the window in the air is very artistic. The detail is not in the primary figure, which is shown in silhouette, but in the backgrounds, particularly the sky and building with the shattering glass. The art is both beautiful and brutal in different panels and that does provide a treat for the eyes if not for the stomach at times.

The chapter in I Am Batman #8 with its action is proving to be more psychological, which in my opinion is a hallmark of good Batman storytelling. We get more character beats here in the vignettes scattered throughout the main action. We learn more about the Fox family dynamic, which at best can be looked at as dysfunctional but realistically so. Each members is trying to do what they feel is right. For example, Lucius is concerned about his son and wants to send him better technology in hopes of giving his son the edge. Jace for his part does not want to become a copy of the original Batman, and he is afraid of escalating an already impossible situation. The other kids are working to come to terms with their parents and what they have been all their lives. We see this reckoning in Vol and Hadiyah as well as they try to navigate their own issues along with Jace’s issues even when some of them do not have all the facts.

This is a gripping story that continues to advance the plot as well as the characters involved.