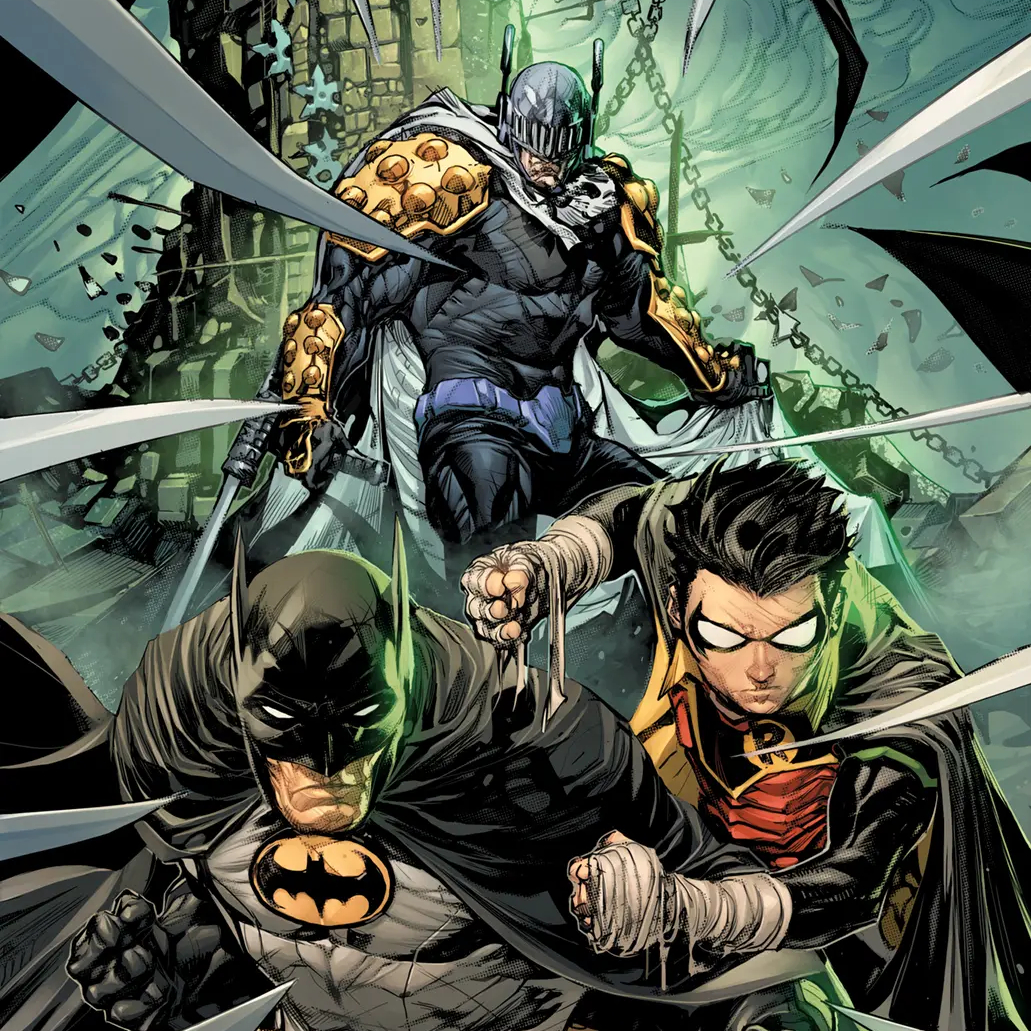 Overview: In Batman #123, Batman and Robin track down the assassin who killed Ra’s al Ghul. Meanwhile, Deathstroke, Ravager, and Respawn suffer a great loss at the hands of the League of Shadows.

Synopsis: Batman #123 begins at Blackgate Penitentiary, as an inmate is pulled from his cell by a security guard and led to see “his lawyer.” When he enters the interrogation room, the inmate finds Batman and Robin waiting for him. In Justice League #68, this inmate was part of a crew of fake Deathstrokes hired by the Royal Flush Gang. Batman hypothesizes that maybe the Justice League didn’t round up all of the imposters, so he presses the inmate for answers.

After refusing to dish to Batman, the inmate is interrogated by Robin. He quickly agrees to give up what he knows, which isn’t much. Back when his crew bought their costumes from Gambi, a tailor for rogues in Central City, there was another guy buying a classic look Deathstroke outfit.

Batman and Robin take the Batplane to Central City. While en route, Batman checks in with Ghost-Maker about Batman Inc.’s progress in rounding up Deathstroke’s Secret Society. Ghost-Maker has the operation under control. Most of the Secret Society has been rounded up, and they’re keeping their tabs on Deathstroke.

In Washington D.C., Deathstroke, Ravager, and Respawn check out the scene of the crime. Deathstroke wants to analyze Ra’s al Ghul’s assassination spot for himself and see if he can glean anything Batman couldn’t. As Deathstroke puts it, Batman has the eyes of a detective. Slade, on the other hand, has the eyes of a killer.

As they arrive at Central City, Batman gauges Robin on the Lazarus Tournament. Robin doesn’t hear his father, as his mind is elsewhere. When Batman finally gets Robin’s attention, Robin says that he’s thinking about Respawn. Damian wants to help his half-brother.

Batman and Robin arrive at Gambi’s. After narrowly escaping Gambi’s death traps, which Batman triggered after hearing that Robin has a girlfriend, they confront the real killer. This killer is dressed as Deathstroke, but his face is shrouded, so they can’t see who it is. The killer reveals that he wants to truly punish Slade Wilson.

Back at Washington D.C., Deathstroke calls out the Hood, who has been watching him from afar. Before the two can trade words, the League of Shadows attacks. Deathstroke, Ravager, and Respawn try to run for it, but they’re caught in the onslaught. Respawn jumps into the line of fire to protect his dad.

Analysis: Unlike Batman #122, this installment in the Shadow War event is a little more coherent and straightforward. Batman and Robin are following what leads they have in order to find the killer who donned a Deathstroke outfit and assassinated Ra’s al Ghul in Shadow War: Alpha #1.

Much of the enjoyment of Batman #123 hinges on the witty, yet heartfelt, dialogue between father and son. While Damian Wayne chides his dad, he also opens up, revealing to his father that he worries about the path that his half-brother, Respawn (revealed in Robin #13), is walking. Damian doesn’t want Respawn to emulate Deathstroke. Instead, he yearns for his half-brother to have some kind of moral compass, to be helped and guided by Bruce Wayne and the Bat-Family. Batman doesn’t respond, but artist Howard Porter and colorist Tomeu Morey convey in the paneling, framing, and shadowing of Batman that this moment hits emotionally. Readers can see Bruce’s tenderness in Batman’s half-hidden face, that these words from Damian were what he needed to hear.

For anyone who has been reading Batman these past few years, this issue’s focus between father and son is something readers have been needing for a long time. Robin is the true heart of Batman, and for years now, he’s been mostly absent from the pages of this title. It’s good to see the dynamic duo back in action.

Playing out simultaneously with the Batman and Robin investigation, Deathstroke and family are looking into the assassination in Washington D.C. Robin’s words prove to be a bit of foreshadowing as, by this issue’s close, Respawn is near-death, if not dead already. Deathstroke, a man who in these pages defines himself as a killer (noting that Batman is merely a detective), finds himself cradling the body of his son. It’s tragic and poetic, and there’s a sick sense of irony that ties into this ending in the following backup story, wherein Deathstroke chides Batman for endangering a child. It’s also Slade’s own hubris that brought on this moment, as he was warned by his children that coming back to the scene of the crime might be a terrible idea.

Preceding Respawn’s (alleged) death is a cool bit of gunplay as the League of Shadows gets the drop on Deathstroke and family. It’s all fun and games until it’s not. Up until this point, Slade and his son have narrowly escaped horde after horde of Talia al Ghul’s never-ending flood of ninjas, so this ending comes as a bit of surprise.

While Porter excelled at showing Batman’s emotion a few pages earlier, the ending here in Batman #123 stumbles a bit in the art department. There’s something too cartoony about the big closeup of Slade’s face that undercuts the emotional impact. The rest of the issue carries some of the previous art problems from Batman #122, namely that the proportions of the characters feel off sometimes. It’s an inconsistent problem, and the worst offender is Ghost-Maker at the bottom of page eleven, whose head bears a strange, flattened shape.

Story #2: “Batman Versus Deathstroke… And The Joker” by writer Joshua Williamson and artist Trevor Hairsine

Synopsis: Picking up right where the backup of Batman #122 ended, Batman tries to reason with a Jokerized Deathstroke. Deathstroke won’t have it. He blinds Batman, then runs off to kill Joker.

At an abandoned comedy club, Joker is playing cards with his henchmen when suddenly all of his goons are executed. Deathstroke arrives and points a gun at Joker’s head. When Joker wonders why Deathstroke isn’t dead, Slade reveals that his super-soldier serum is keeping him alive.

Batman busts in and stops Deathstroke from executing Joker. Deathstroke causes an explosion, and Batman leaps to save Joker from certain death.

Later, atop GCPD, Commissioner Gordon tells Batman that there’s no sign of Deathstroke anywhere. Meanwhile, Deathstroke awakens at home, safe and sound. He doesn’t want anyone to know that he didn’t complete his contract.

Analysis: While this backup in Batman #123 is a follow-up to the last issue’s second story, it also carries with it a sick sense of irony that ties into Part 5 of Shadow War nicely. In this installment, Deathstroke tracks down Joker after being poisoned by the Clown Prince of Crime’s toxin. Before Slade can kill Joker, Batman intervenes, saving Joker’s life.

In the heat of the moment, Deathstroke calls out Batman for endangering the life of a child and putting his own life on the line to save someone like Joker. This is ironic in that, just a couple of pages earlier, Deathstroke is seen cradling his own dying child in an alleyway. Respawn very much wanted to walk in Slade’s footsteps, and it was this desire that presumably cut Respawn’s life short.

Beyond that, there’s not much more this story offers. It ends as quickly as it began in the previous issue. Deathstroke escapes, and Batman has stopped the hit on Robin’s life.