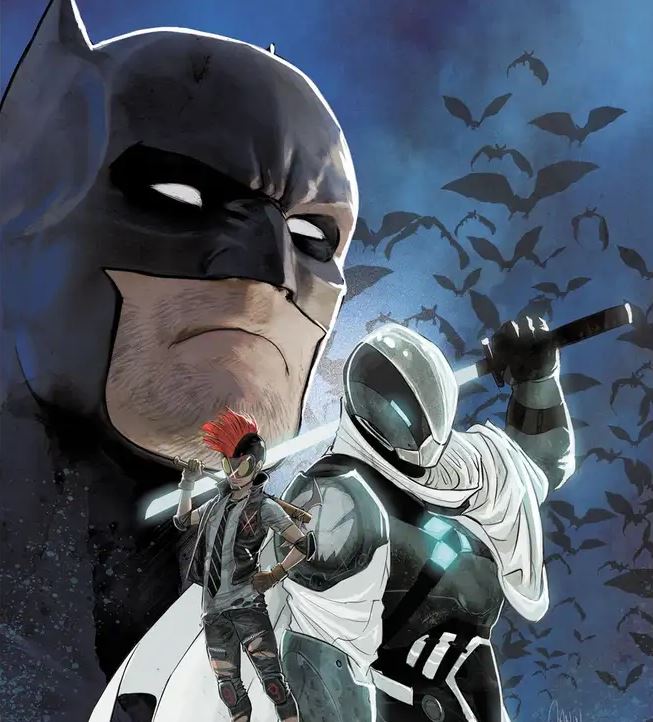 Overview: In Batman 2022 Annual #1, Ghost-Maker becomes the leader of Batman Incorporated and leads the team on its first mission under new management.

Synopsis (spoilers ahead): Batman 2022 Annual #1 begins years ago in Madrid, Spain, as a young, masked Bruce Wayne and Minkhoa Khan battle would-be bank robbers. While they fight, the two friends argue about Bruce’s vision, wherein he proposes working his way up the ladder from street thug to crime lord, dismantling a criminal empire piece-by-piece. Once he hones his skills in Gotham, Bruce wants to branch out and offer his skills and expertise to crime-fighters around the globe. Khan disagrees with this plan, telling Bruce that crime-fighting is an art form, and artists shouldn’t share their brushes.

At an undisclosed location in the present, every member of Batman Incorporated arrives for a meeting. They are greeted by Batman and Ghost-Maker. Ghost-Maker’s appearance causes some frustration and confusion, especially with Chief Man-of-Bats, who has less-than-fond memories of Ghost-Maker. Before Batman can ask the question as to why Ghost-Maker informs Bruce that he had already done some research into the team on his own.

Years ago, when Batman first created Batman Inc., he approached Ghost-Maker. It was an uneasy meeting, one wherein Batman pleaded his case. In removing warlords and eliminating criminal threats in cities across the globe, Batman informs Ghost-Maker that Ghost-Maker’s actions have created power vacuums that have led to even worse criminals rising to power. Batman proposes that Ghost-Maker help him run Batman Inc., so these cities can have protectors that keep that void from being filled.

After refusing the proposal, Ghost-Maker traveled around the world and battled each member of Batman Inc. He found the team members lacking in skill, telling Batman as such in the present. Instead of asking Batman about the members, Ghost-Maker wanted to see their powers for himself. He presumed Batman would ask him once more to run the team, so first-hand experience was necessary.

Batman tells the members of Batman Inc. that Ghost-Maker is their new leader, and despite Khan’s brash nature, Batman trusts him. As his first order of business, Ghost-Maker splits up the team into local and international divisions. Local divisions stay in their cities while international members help maintain peace across the globe. This cuts the overall group in half. For the international team, their first mission launches in two hours.

Later, Ghost-Maker assembles the international team for their first assignment. The team will depart to Kazbek, Chechnya. The mission is to start picking up the pieces of Lex Luthor’s abandoned crime-fighting experiments around the globe (fallout from the Abyss arc in Batman #118). In Kazbek, they are looking into Project Gray Wolf. After Luthor abandoned it, all contact was lost with the village.

One of the locals, a man by the name of Timur, tells the team that a virus turned citizens violent. They attacked their neighbors. That’s when Lex Luthor arrived, claiming to have a cure for this virus. Luthor created a vigilante by the name of Gray Wolf, who locked up these citizens infected with the virus. When Luthor left, Gray Wolf grew more violent, and now the locals live in fear of him.

Ghost-Maker, Clownhunter, Raven Red, and Wingman enter a neighboring prison where the infected citizens are kept. Ghost-Maker, using trackers he inserted into each member of the team, notes that El Gaucho, Dark Ranger, and Batman of Japan are already in the prison, presumably captured.

Inside the prison, Raven Red and Wingman find the incarcerated locals. Their eyes glow green. Before the heroes can do anything, Gray Wolf attacks. Ghost-Maker uses this as a distraction to free the locals. His A.I. program, Icon, informs Ghost-Maker that the locals are infected with an altered dose of Lazarus Resin. Unfortunately, Ghost-Maker is too slow to relay this information to Clownhunter, who has already opened the cells.

Infected locals come pouring out of the cells and battle Batman Inc. Gray Wolf pleads with the team not to hurt them, as they are sick and infected. Ghost-Maker gasses everyone, knocking out both his team and the citizens. Only Gray Wolf remains standing (because he has a mask on), and Ghost-Maker asks for Gray Wolf’s help in getting everyone back in their cells.

When everyone wakes up, the team learns that Ghost-Maker and Gray Wolf have been working on a cure for the people of Kazbek. Ghost-Maker also found files from the prison computer that indicate that Timur had already been experimenting on the locals before Lex arrived. Timur wanted funding to upgrade the prison, which is why he sought out Lex, who obliged him (for a price). When Luthor left, everything spiraled out of control.

After curing the people of Kazbek of Lazarus Resin, Ghost-Maker offers Gray Wolf a spot on the team. Gray Wolf accepts.

Analysis: Batman 2022 Annual #1 bridges the gap between follow-up on some new developments in recent issues of Batman and the Shadow War event, as well as leads into a new Batman Incorporated series that will be launching in a few months. It walks a fine line between a stand-alone story and a plug. As a stand-alone story, it provides an explanation of how and why Ghost-Maker came to run Batman Inc. after the Lex Luthor plot in Batman #118.

Ultimately, writer Ed Brisson, artist John Timms, and colorist Rex Lokus deliver what feels like a Batman-ified episode of The A-Team without Batman. Bruce Wayne makes a cameo, but the bulk of this issue is devoted to Ghost-Maker and Batman Inc. working out their issues and coming together to pick up after Lex Luthor’s abandoned projects. While it’s not the most thrilling set up in the world, it does give Batman Inc. a goal that is both focused and open enough to give the creative team room to explore vast, uncharted regions of the globe and discover fearsome new foes. There are also plenty of opportunities for team members to clash and resolve personal issues, as while these were touched upon, nothing was resolved between primary characters.

In Batman 2022 Annual #1, the team’s would-be first foe turns out to be another hero by the name of Gray Wolf. His design is neat, and he’s quite the hulking monstrosity. There isn’t much characterization beyond his overall aesthetic, but that should be coming down the pipeline when the follow-up Batman Incorporated series launches later this year.

For fans of Ghost-Maker and Clownhunter, this annual is a welcome addition to their, now shared, journey and lore. For those looking for something specific to Batman, this annual is a wasted opportunity. Unlike past annuals, this 2022 edition forgoes the dramatic, heartfelt one-shots readers have been captivated by in recent years for a run-of-the-mill adventure. It’s not bad; it’s just different. Readers’ mileage may vary depending on expectations.

Batman 2022 Annual #1 is cut from a different cloth, serving as more of a lead-in to an upcoming Batman Incorporated series than as a one-shot narrative about Batman. In fact, there’s very little Batman to be found here.