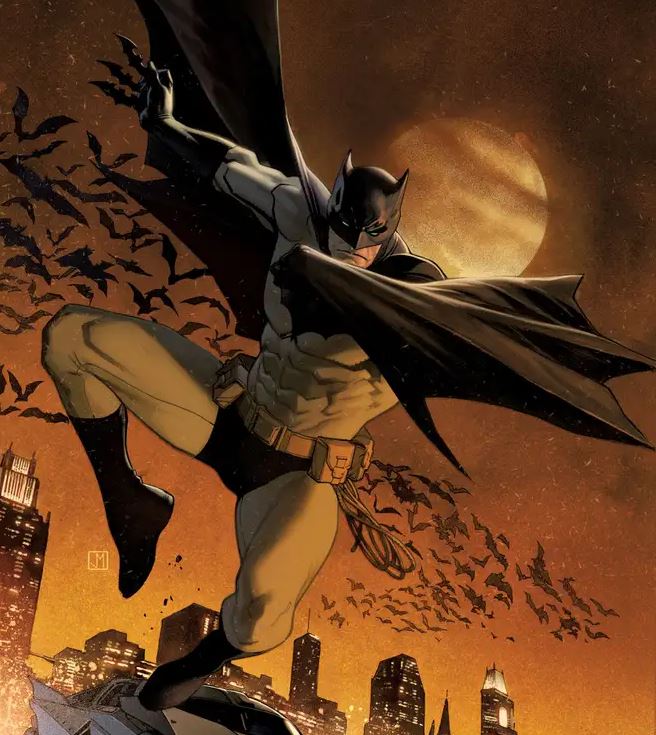 Synopsis: In Badhnisia, a wealthy couple has a night about town, now that Batman took care of the Abyss problem (back in Batman #121). Upon entering an alley, Abyss appears, assaulting the couple before the man and woman can escape.

In Gotham City, Oracle calls Batman over the comm. She warns him that Abyss has been sighted again in Badhnisia. Before he can answer, Oracle guesses that, given Batman’s silence within the past few days, he’s already overseas and on the hunt for Abyss. She has guessed correctly.

In Badnisia, Batman finds Lex Luthor’s old building torched. Inside Luthor’s abandoned lab, Batman encounters Abyss. The two fight, with Batman quickly gaining the upper hand. He takes down Abyss only to reveal that it isn’t the same rogue that he fought a couple of issues back. Detective Cayha has been masquerading as the villain, using civilians’ fear of Abyss as a way to get information about her missing parents. It’s proven successful, and she now knows who took her parents.

When Cayha tells Batman that she plans to kill this abductor, he tells her about the night he first visited Joe Chill, the man who shot Thomas and Martha Wayne. He returned from traveling abroad to find out that Joe Chill had been caught and confessed to the murders. Chill was in Blackgate Penitentiary, and Bruce Wayne stole a guard’s gear after entering the prison. Up until this point, Bruce fantasized about killing Chill. He visited Chill’s cell and waited for the murderer to look him in the eyes. It was then, Batman says, that he made a choice similar to the one Cayha is about to make.

Cayha tells Batman that her target is hiding out at a heavily guarded club on the docks. The two head to the club and bust some goons up. Abyss captures her target, demanding to know where June and Joy Cayha are. The man confesses that he killed Cayha’s parents long ago.

Abyss raises her hand to murder this man. When she does, she hesitates, asking Batman if he’s going to stop her. Batman says nothing. Abyss strikes her target several times, then raises her arm again for another killing blow. When Batman remains unphased, she hesitates once more, but ultimately she demands to know where the Cayhas are buried.

After the killer has been arrested and booked, Detective Cayha meets Batman on the roof of the police station. She asks him why he didn’t stop her. Batman tells her that he’s seen other people walk this road and that if he intervened, she would just wind up at this precipice again. By letting her decide, he can ensure she won’t try to kill again. Batman gives Cayha a way to contact Batman Inc., as she’s ready to join the team.

Before he can leave, Cayha asks Batman if he killed Joe Chill all those years ago. Batman tells her that he did not, that he stared into the dark and saw something that scared him. It was himself. Batman leaps away.

While Batman #124 is arguably more personal and heartfelt than the annual, the issue arriving on comic store shelves one week after the annual undermines the moments of heart that Joshua Williamson, Howard Porter, Jorge Fornes, Tomeu Morey, and Clayton Cowles are going for. Rather than ending on a nice punch to the Abyss storyline, it feels like yet another ad for Batman Incorporated.

The story itself also feels underbaked. Abyss reappears, and Batman immediately finds this rogue, instantly revealing that it’s actually Detective Cayha. There’s no detective work. There’s no real action on Batman’s part. After a brief fight, Batman subdues her and tells her about a time he thought about killing Joe Chill.

Batman then decides to join her on her hunt to murder the man who took her parents, and for the remainder of Batman #124, he merely watches her. When one considers this plot, Batman is an extremely passive character in this issue, just waiting for twenty-odd pages to play out, so he can once again offer Cayha an invite to Ghost-Maker’s Batman Inc. team.

Most of the art in Batman #124 comes from Howard Porter. There are a couple of neat action panels, but the same problems that were at play in the Shadow War tie-in Batman issues (Batman #122 and Batman #123) spill over into this book. Namely, the facial proportions are distorted and strange. Cayha’s eyes and head morph and alter in size throughout this issue, and it’s quite distracting. Batman doesn’t have that problem, though he has the luxury of wearing his mask the whole time, which saves him from disfigurement.

Jorge Fornes fills in for the flashback sequence with Joe Chill. There’s a scene where Bruce fantasizes about what he’d do to Chill, and the paneling and pacing in this flashback carry the most emotional resonance.

On a final positive note, there is an absolutely incredible variant cover by Filya Bratukhin that every reader should Google right now. It’s gorgeous, eye-catching, and almost dystopian in a way.

Synopsis: The backup in Batman #124 begins after the events of Fear State, as Poison Ivy finds herself in her former subterranean Eden. After combining her two parts into one and using her powers to save Gotham, Ivy finds that she is losing her abilities and her connection with the Green.

The Gardener comes to check on Ivy. In her state of distress, Ivy accuses Bella Garten of wanting this to happen, of allowing Ivy to lose her connection and her abilities. Bella pushes back, telling Ivy that if she remained only half of herself, eventually she would have faded away.

When the Gardener tells Ivy to go home to Harley Quinn, Ivy refuses. She’s not one to be told what to do. She’s going to get her powers back, and there’s one man who can help her. Bella pleads with Ivy not to do it, but it seems Pamela Isely has made up her mind.

Elsewhere, Poison Ivy feels her powers fading even more, and she’s found her solution from the one man who could help her. It’s in a vial, and it’s some form of fungus that she breathes in.

When a vehicle pulls up to the desert wasteland Ivy finds herself in, a different type of Poison Ivy takes a hand offered to her.

Analysis: There aren’t many Poison Ivy-centric stories, and this backup tale by G. Willow Wilson, Dani, and Trish Mulvihill is promising. While it’s intended to advertise and promote the Poison Ivy miniseries that’s currently on the shelves, there’s a sense that the creative team intends to take Ivy on a unique and darker journey.

While we don’t get any indication of the plot, the undertone of this tale comes across as a horror story. It seems like Ivy is going full villain again and that she’ll have a whole host of new abilities to entice readers and challenge the Bat-Family. Time will tell, but this backup is definitely intriguing.

Batman #124 is yet another tie-in to the upcoming Batman Incorporated series launching this fall. It carries some heart, but it’s not enough to give this Abyss-centric follow-up some legs.