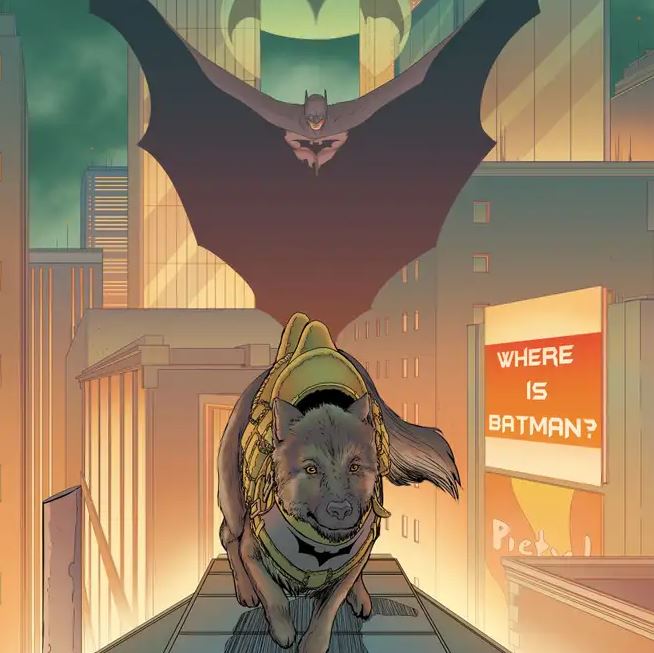 Overview: In Batman: Urban Legends #16, Batman teams up with Zatanna, Alfred goes undercover, the Birds of Prey investigate a metavirus caused by an app, and Ace the Bat-Hound saves the day!

Story #1: Batman and Zatanna in “Bound to Our Will” Part 6 by writer Vita Ayala and artist Nikola Čižmešija

Synopsis: The first story in Batman: Urban Legends #16 sees Batman and Zatanna meld together almost Two-Face style as they battle nondescript monsters. They separate but must then join hands through the dimensional barrier. They join hands and escape the horde, awakening in Zatanna’s workroom. Batman and Zatanna return to one of Batman’s safehouses where they pore over the details of their relationship. There is a flashback, and then in real-time, the two embrace. They then return to the Hall of Justice and decide to have dinner with Superman.

Analysis: Mercifully, this story is finally over. It was unfortunately one of the worst-written and worst-illustrated stories in the entire Urban Legends run. While writer Vita Ayala does at least focus on the Batman and Zatanna relationship, I found it so clichéd and overwrought that it honestly felt like a teen drama. To be fair, the characters are more mature, but the remonstrances and metaphorical gnashing of teeth at the “unfairness” of life dried up any emotional resonance. As the arc progressed, the action itself felt increasingly irrelevant to the focus on the relationship, which did not benefit either. Batman’s decidedly wooden facial expressions (see page 18 for some particular examples) underscore the general lack of enduring effect – a sad outcome given how hard the creative team obviously tried to center the emotions between the two characters. This story needed to be half as long at most, and it is frankly a relief that this long story is finished.

Synopsis: The second story featured in Batman: Urban Legends #16 begins in the Batcave, as Batman and Alfred discuss a surge in resident deaths at an assisted living facility named Gotham Gardens. Alfred noted that a friend of his was among the deceased and indicates that he will handle this matter personally. He goes undercover as a resident of the facility. He is examining records in a dark office when Scarface and Ventriloquist accost him. They talk, and Scarface warns Alfred away from an area where all of the residents who died were taken. Alfred investigates and finds a makeshift morgue and evidence of intentional efforts to overdose residents. Batman warns Alfred to exit, and he does but runs into a guard’s fist. A woman in a white coat (“Dr. Emmett”) mocks Alfred, and Batman intervenes. Back in the Batcave, Batman tends to some minor wounds on Alfred.

Analysis: There is not much to this winsome one-shot, but there needn’t be. Any sighting of Alfred these days is a boon, and the narrative emphasizes their relationship as one that remains the purest one in Batman’s life.

Synopsis: The next story in Batman: Urban Legends #16 sees Katana holding the Soultaker sword to Lady Shiva’s throat, and Shiva confesses that she hired the Birds of Prey at the behest of Richard Roe himself. She wants money to retrieve her daughter. They clash, and Miracle Molly separates them.

There is panic in Gotham due to the “metavirus” sparked by the app. The team prepares themselves to leave but is thwarted by Miracle Molly herself, who leaves with Noah Grove. Katana is injured badly. Molly delivers Noah to Richard and his partner Ladeline Dusk. Ladeline expresses anger that Roe took the credit for her work. She removes Noah’s face, which changes features. Elsewhere, Katana is fading, but Shiva surprises them all with healing powers that she uses to save Katana.

Analysis: This story generally feels fine if not exceptional. There is little of the Birds of Prey in here, and it is surprising in the final installment to see Miracle Molly revealed as a fairly flat and common villain. She is a much more complex character than that, at least as envisioned by James Tynion IV in the Fear State arc of Batman.

Synopsis: The final story in Batman: Urban Legends #16 sees Batman and the bear inflict serious wounds on each other. Neither is motivated to fight, but cattle prods enrage the bear, forcing Batman to defend himself. Mr. Tarkov orders the bear destroyed, and Batman takes down the putative executioner. Mr. Tarkov launches into another Tolstoy story. The bidding resumes, and Joker wins with a $40 million bid. Thugs begin to kick Batman, but then Ace appears. The turtle hurtles into a thug, and the bear gets loose.

The squirrel helps explode the boiler, and in the aftermath Licks Luthor goes after some thugs. Batman is too badly injured to depart, but Ace drags him through a coal chute. Back at Wayne Manor, the Flash adopts the turtle, and the bear and the squirrel have a new home on Wayne Manor grounds.

Analysis: There is nothing seriously wrong with this story save that it should have been two to three parts at most. It is always nice to see non-human animal companions with their found family, and they can certainly do worse than Bruce Wayne.

It is a relief to have two over-long six-part stories come to a close. Hopefully the book can pick up from here, as it has struggled.