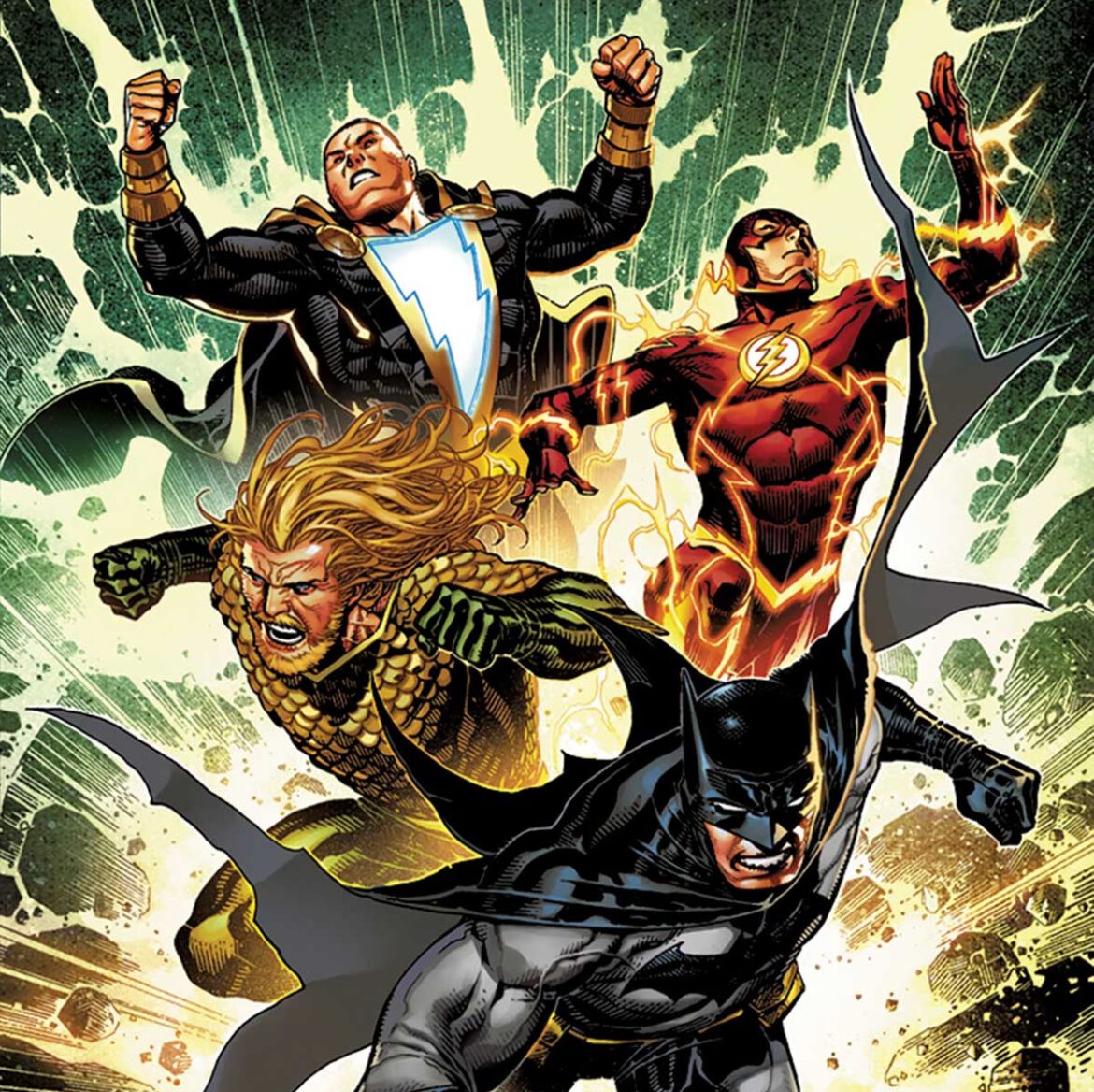 Overview: In Batman: Urban Legends #17, Batman tracks down the Riddler, teams up with the Flash in order to stop Mr. Freeze and Captain Cold, and confronts Black Adam.

Synopsis: The first story in Batman: Urban Legends #17 begins years ago, as the Flash has rounded up some rogues for the Central City Police Department. He realizes that he is missing Captain Cold, who is battling Batman in Gotham along with Mr. Freeze. Later, the Flash and Batman discuss a new isotope that Freeze can use to turn Gotham fog into a “radioactive death cloud.” Batman asks the Flash for help. They scour Gotham while Captain Cold and Mr. Freeze work on the isotope and bicker.

In the Batcave, Batman and the Flash discuss the significance of the loss of their parents. They talk and remove their cowls. They are young. Alfred brings refreshments, and at the mention of water, the Flash knows where Mr. Freeze and Captain Cold will be. They need a heat sink, and the Gotham sewers will suffice. The heroes and rogues confront each other, and while Captain Cold stands back, Mr. Freeze causes a few drops of the isotope to fall into the water. The water begins to freeze, threatening the infrastructure.  Batman tells the Flash to run ahead of the expanding frozen river and turn the valves in the precise order needed to shut down the flow. It works, and Mr. Freeze is apprehended. Later, Batman and Jim Gordon thank the Flash for running through a thousand miles of tunnels to be sure everything is okay.

Analysis: I quite like this story. I do not generally read The Flash comic although I am familiar with the character, and writer Ryan Cady does a nice job of telling a short, straightforward story that lets the characters shine. The enthusiasm of young Bruce and young Barry is actually quite endearing and ends up creating more of a Batman and Robin tone, although they are both more akin to the sunny Robin than the dour Batman of his maturity. It is effective in the short format, and the straightforward rogue plot to take down the guts of Gotham adds to the general sense of fun. This is a classic caper, and it works.

Story #2: Batman and Aquaman in “The Sea Beyond” by writer Joey Esposito and artist Serg Acuña

Synopsis: The second story featured in Batman: Urban Legends #17 sees Aquaman and Mera unable to find “thousands of heartbeats.” Flashback years ago, and Aquaman and Mera swim into the Batcave and approach Batman. They ask for help. Sea life is dying because Joker attacked the fish supply. Batman protests that the supply was cleared, but Mera angrily reminds Batman that most of the world’s fish are not on land.  He apologizes and helps out. They locate an anomaly on the Atlantic seabed and they set off, Aquaman and Mera towing Batman in a submersible.

They encounter a whirlpool and a monster from the “Sea Beyond the Veil,” some kind of dimensional portal. They try to take the creature down, and Aquaman summons friends from the deep. The monster evades them all and begins spawning. Batman harpoons the creature and begins to tow it. It pulls them beyond the veil into a region of ocean that is full of life. Aquaman is humbled, and here the creature is calm. The creature is also sentient, and its name is “Creare.” Creare helps them with an antidote to the Joker toxin, and Batman states that he will be more mindful of the larger world of which Gotham is part. Aquaman calls an Orca-uber.

Analysis: This seems like a pretty basic Aquaman-Batman-Mera mashup. There’s not too much here, but the environmental justice theme is welcome.

Synopsis: The next story in Batman: Urban Legends #17 sees Batman and Hawkman dispose of some thugs and argue about Black Adam. Hawkman warns Batman. The scene switches to the Royal Palace of Kahndaq. Batman appears and tries to convince Black Adam to step down. As they argue, Batman hurls a Batarang at Black Adam’s head. Black Adam is angry enough to fight Batman without his magic. Enemies advance on Kahndaq. Even without his magic, Adam is at least Batman’s equal in hand-to-hand combat.

Adam says an incantation and regains his magic. Batman points out that no matter how untouchable he may be, those around him are flesh and blood. Therefore, his power is only a provocation. Batman reflects that he is in a better position in Gotham because he has a family.

Analysis: I know next-to-nothing about Black Adam, so I found this story mostly confusing. Amancay Nahuelpan’s art is always worth a look.

Story #4: Batman, Riddler, Penguin, and Catwoman in “On His Worst Nights” by writer Dan Watters and artist Riley Rossmo

Synopsis: The final story in Batman: Urban Legends #17 sees Commissioner Gordon and Batman discuss Riddler’s latest escape from Arkham Asylum. Riddler is narrating. He reflects that Batman might suspect Penguin or Catwoman, but neither criminal assisted Riddler in this case. He leads Batman to a home, but Batman is enraged to see that he has been tricked and that Riddler is there only on a number of TV screens.

Analysis: This story is so short and, as told in Riddler’s singsong voice, resembles a prose poem. I do not generally like Riley Rossmo’s cartoonish style, but he shows more restraint depicting Batman and mirroring the dark tones of this story than he does with the more wide-open Harley Quinn.

Although the stories here are of uneven quality, I much prefer the one-shot format of the present issue. Here, the theme of Batman-DC Hero team-ups is effective and picks up a book that has been struggling.