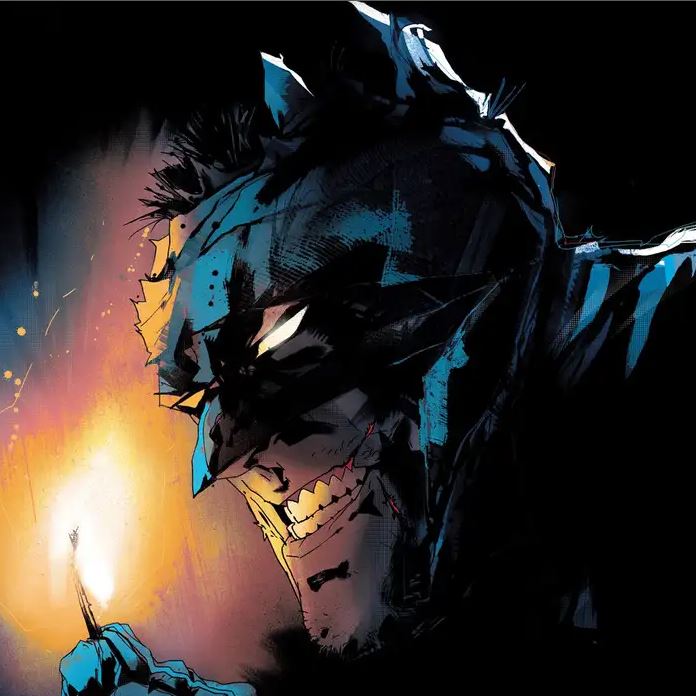 Overview: In Batman: One Dark Knight #3, after a tussle with Killer Croc, our characters EMP, Brody, Batman, and Vazquez all meet up on Blackgate Bridge. The end of the mini-series is explosive.

Synopsis (spoilers ahead): As Batman: One Dark Knight #3 begins, Batman is tracking EMP through the Gotham south sewers. It is nearly pitch black, and Batman’s senses are alight. He acknowledges how much he enjoys the darkness. He finally comes across EMP sitting cross-legged and tied up, with bodies strewn around him. Too late, Batman realizes that this is a trap as the bodies animate and come after him.  He disengages, and behind him Killer Croc appears, explaining that the men literally worship him.

Downtown, Vazquez is forcing Brody across town to the Blackgate Bridge, which Batman will have to cross if he is to install EMP at Blackgate Prison.  She tells some corrupt GCPD officers to let the gangs know this as well. The gangs profess to put aside their differences and combine their efforts to apprehend EMP.

Back in the sewers, Croc and Batman fight. Croc tells Batman that if he can keep EMP in the sewers he can use it to build influence. Batman battles Croc and his minions and is seriously injured, with broken ribs and severe lacerations. He pulls out the last item in his utility belt, and it ignites a huge light that drives away the minions. Batman pulls himself up and faces Croc, performing a classic “tomoe nage” throw to drive Croc directly into the wall behind him.

Meanwhile, Brody breaks away from Vazquez and signals a passing police car. Four officers empty out of the car, and after listening to Brody, three of them disarm and restrain the fourth officer. Vazquez calmly murders him.

Down in the sewers, Batman is wounded but proceeds, dragging EMP the final few blocks to the bridge.  They ascend through a manhole directly onto the bridge, just as Batman’s comms reanimate and Gotham City begins to electrify. Batman is alarmed and even more so when he sees the array of gang members and firepower directed at him and EMP. A rocket-propelled grenade destroys a portion of the bridge, with Batman on one side and EMP on the other. The gangs rush Batman and begin pummeling him, trying to force him into the river.  Vazquez and Brody appear and approach EMP, who is already beginning to energize from the electricity flooding Gotham City.

EMP is horrified that Brody is seeing him in his current state. Batman is finally pushed off the bridge but soars across the gap. Just as he does, another RPG buries Batman in a layer of concrete. Vazquez begins to degrade Brody, trying to goad him into unleashing his own power that will likely consume EMP. Brody begins to glow, and he approaches EMP through the latter’s energy shield. To Vazquez’s horror, the two embrace. But EMP shoves Brody away as the combined energies are too much for him. Brody rounds on Vazquez and begins to glow anew in hot anger. Batman appears and calms Brody down, eventually embracing him as well.

Vazquez is furious and begins firing her gun at EMP. The bullets cannot penetrate the energy shield, but the metal spray burns him. EMP warns that he is about to blow, and Batman gathers Brody to shelter under the bridge. After the blast, they swoop back up to find a satisfied Vazquez. They argue, and Vazquez explains that she is constantly in contact with Gotham criminal bosses, seeking the offspring of the Gotham Rogues to use as leverage. She turns to leave and mocks Batman, indicating that no one will possibly believe the truth of what happened. Batman has been quietly transmitting their entire conversation to Commissioner Gordon. She is subsequently arrested.

EMP’s body is retrieved from Gotham Harbor. Amazingly, he is still alive. He is transported to Blackgate Prison and technical professionals at Blackgate also outfit Brody with a mobile device of the kind Batman used with EMP. Brody is happy to leave with Oscar, with whom there is mutual love and appreciation. Batman’s comms are up and alive with the typical needs of Gotham’s citizens, and Batman soars off into the setting sun.

Analysis: The finale of the series does not disappoint. While there are no shocking plot twists, I very much appreciate the solidity and straight-forwardness of the narrative writer and artist Jock creates. You can feel how well the action has been storyboarded and planned, and the sense of dynamism and movement created in the opening book is extended and fulfilled here.

In the second book, the movement slows down as the gangs close in and Batman’s progress is stymied. The three-part format requires acceleration to the end, and Batman: One Dark Knight #3 delivers. The strand linking Brody, Vazquez, and EMP is effective, especially when you juxtapose Brody’s reaction to his father with Vazquez’s. Both have had loved ones killed by EMP, but Brody chooses love instead of Vazquez’s hate. This mirrors Batman’s own choice at the loss of his parents, except that Batman’s true love is Gotham (okay and perhaps Selina!). Themes of love and forgiveness are emphasized with both of the important embraces at the end of the book (Brody-EMP, Bagman-Brody, and then the physical connection between Oscar and Brody in one of the final panels).

I appreciate Jock’s choice in making EMP a complicated rogue. Yes, he has blood on his hands, but there is every indication he is horrified by his behavior and does not wish further harm on innocents. Batman himself acknowledges EMP’s humanity, answering EMP’s entreaties to help Brody, and referring to him consistently as “Edward.” As Batman knows better than anyone, names and symbols are enormously powerful, and his decision to refer to EMP as “Edward” is a powerful signal of EMP’s humanity and Batman’s incredible capacity for forgiveness and generosity.

The gangland story that felt more prominent in book two recedes here in book three, which was in my view the right decision. This story focuses on EMP, Gotham corruption, and the capacity for love and forgiveness. These latter two themes are hardly novel, but they are emblematic for a reason, and Jock leverages them well in a tight, compelling, and ultimately satisfying story.

Jock’s art remains some of my favorite in the entire history of Batman. Narrative constraints made it impossible for Jock to illustrate Batman soaring, and for similar reasons, we are not treated to some of the stunning black-and-white gargoyle poses that Jock favors in much of his work. The shadings in the sewers are exciting, as is the fact that we never clearly see Killer Croc’s face.

Ultimately, this miniseries does not disappoint. It features strong writing, complex and engrossing art, and represents some of the very best work to appear on Black Label.

This is one of Black Label’s best efforts. The more we get from Jock, the better. He has earned more trust and leeway with his writing as well.