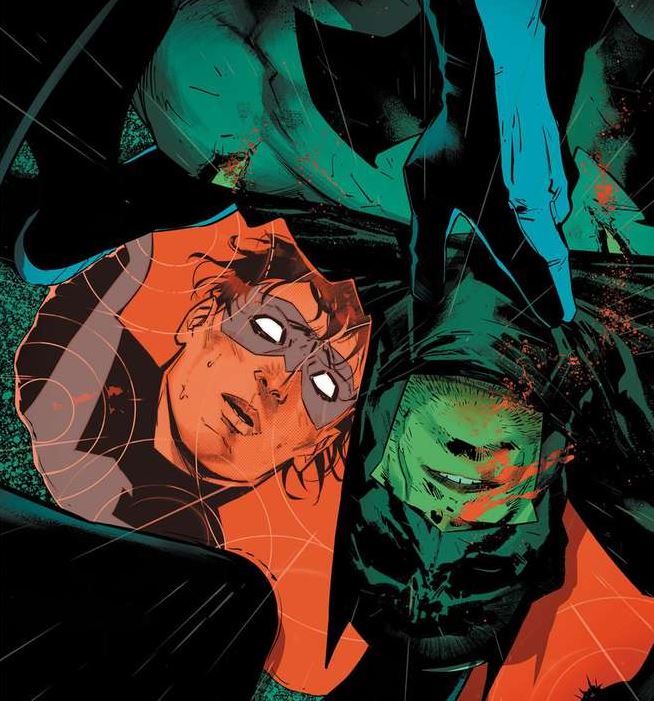 Overview: In Batman #126, Batman and the Bat-Family barely escape the might of Failsafe, an Amazo-powered mech who desires to end Batman once and for all.

Synopsis: As Batman #126 begins, Batman muses about the Bat-Family, about his team of soldiers who go out and save Gotham. He argues with Robin (Tim Drake), who is back on patrol so soon after getting shot in the neck (last issue — Batman #125). Batman tells Robin that it’s too soon, but Tim just bails from the conversation.

Batman is back in the new Batcave, still thinking about how he doesn’t dream. Yet, the Bat-Family does, and they deserve to be happy, which is something he can’t afford to be. As he thinks about the power vacuum that Penguin’s death created (also from last issue), he’s attacked by a mech. The mech gets the upper hand, and Batman is almost beaten. He orders his car to speed away, grappling to it in order to escape.

Out on the Gotham City streets, Batman climbs to his fight and takes a call from Oracle. She’s worried about Batman’s vitals. He interjects to tell her about the robot, which runs after in pursuit of Batman. Batman engages the mech while Oracle scans it, noting that it has Amazo tech.

The mech has Batman on the ground now, and Bruce tries to talk to it in order to stall it. After asking the mech’s name, it reveals to Bruce that it’s called “Failsafe.” Just then, Batgirls Cassandra Cain and Stephanie Brown, and Signal engage the machine.

Failsafe takes Stephanie down, and Signal leaps in to battle it while Robin (Tim Drake) escorts Batman to the Batmobile. Inside the Batmobile, Robin straps Bruce in and drives him to the Batcave, where Leslie Thompkins will meet them.

Nightwing arrives on his motorcycle, leaping off it, so it crashes directly into Failsafe. From the flames of Nightwing’s motorcycle, Failsafe notes that everything is tainted. It leaps back into battle, taking on the entire Bat-Family at once.

At the newer Batcave, Leslie Thompkins is prepping a table to operate on Bruce when Failsafe arrives. It tells Leslie that she cannot help, as Failsafe represents the end of Batman.

Meanwhile, Batman has asked Robin to take him to the old Batcave. Robin escorts Batman in, but there comes a point where Batman says that he must continue alone. He leaves Robin behind, entering the shadows of the cave.

Deep within the cave, Bruce strips down before a trunk, opening it. He notes that Failsafe is an aberration, something he can’t quite remember.

Just outside the shadows, Robin calls into Oracle. As he does so, a new voice calls to him. It’s the Batman of Zur-En-Arrh, Bruce’s failsafe personality that has assumed control in a situation even Bruce couldn’t handle.

Analysis: Batman #126 starts off with Batman mulling his inability to dream and how the Bat-Family dreams. He thinks about how he can’t be happy, about how this vigilante life doesn’t allow for it. Simultaneously, he wishes for happiness for the Bat-Family, believing that they should be allowed everything he isn’t. Before he can follow this train of thought too far, Bruce Wayne is attacked in the Batcave by Failsafe, a new, Amazo-powered mech with designs to end Batman.

Most of this issue is devoted to the sheer might and raw power of Failsafe. Batman can outsmart it just enough to avoid death, but Failsafe is unstoppable. It can survive any sort of destruction the Bat-Family can dish, taking just about every member on at once. For fans of Jorge Jimenez, Jimenez really gets to show off his exemplary action chops in this issue. Colorist Tomeu Morey brings out a vibrancy to the world of Gotham, highlighting a diverse palette as Failsafe takes on a full, colorful spectrum of Bat-people.

Batman #126 is certainly a sight to behold, and watching Batman narrowly survive death multiple times really sets the bar for what kind of terror Failsafe brings to the table. What’s interesting to note is that this issue opens with Batman ordering Tim Drake off duty, and it’s Tim who carries Batman to the Batmobile, saving Bruce’s life.

There’s a clear undercurrent of Batman being ever the father figure, worrying about his flock. He underestimates their abilities in his worrying, not grasping how effectively and coordinated they work to save their surrogate father’s life. It’s an interesting idea, one that seems to come to a close by the end of this chapter, as Bruce’s persona has gone, having been replaced by the Batman of Zur-En-Arrh.

For those unfamiliar with this vividly colored Batman, the character first appeared in Silver Age comics as an alien Batman on the planet Zur-En-Arrh. During Grant Morrison’s epic Batman run, this Batman was reimagined as a darker, more primal, failsafe personality of Batman that assumes control when his normal persona is broken.

Batman of Zur-en-Arrh resurfacing in this issue certainly spells out a roadmap for darker days ahead, and it’s also a nice (and very unexpected) callback to a love-it-or-hate-it Batman run.

Synopsis: In Burnside, Catwoman tracks down her last lead in the backup for Batman #126. For the past two weeks, she has tracked down “literal dead ends,” as she calls it. All of the children of Penguin she went on the search for had been killed, and this last one represents her one shot at finding someone for the Executor to transfer Oswald Cobblepot’s wealth to.

All of Cobblepot’s children have been killed by strangulation, and as Catwoman enters the apartment of one Ethan Cobblepot, Ethan is in the middle of being murdered. Catwoman intervenes, but she’s unable to stop a masked man from putting Ethan into a coma.

Back at the Executor’s office, Ethan’s coma puts them in a dilemma. Ethan gets nothing if he is of unsound mind, per Penguin’s wishes. Just then, Addison and Aiden Cobblepot enter. They show their claim to Penguin’s estate by proving a DNA connection.

The Executor reads Penguin’s will, which states that his money goes to a bird sanctuary. Addison and Aiden inherit the Iceberg Lounge, which infuriates Addison. As the two leave, Selina Kyle notes the cufflink that Aiden is wearing. It’s the same cufflink that the assailant who attacked Ethan was wearing the other night.

After the siblings leave, Executor tells Selina that her payment is in her account. She will also get the contact information to the mothers of Penguin’s children, so she can donate her shares to them. Selina asks for a final address, and we’re to assume that she means the address of Addison and Aiden.

Analysis: Last issue, we found out that Penguin got around town and had a whole army of little Cobblepots out in the world. Now, they’re pretty much all dead. Addison and Aiden Cobblepot seem to be the culprits behind the murder of Oswald’s children, and Catwoman wants to investigate as to why.

The plot definitely thickens in this installment. While it’s not as shocking of a reveal as Penguin having a whole bunch of kids, it’s enough momentum to keep readers invested into where this backup is going. It’s also cool that Catwoman leads a backup feature in a Batman book. While the two may not be together anymore, it’s great that she still occupies some pages of Batman.

Batman #126 is an explosive action piece that sees the return of an unexpected fan-favorite character. It’s fun, fast, and absolutely stunning.