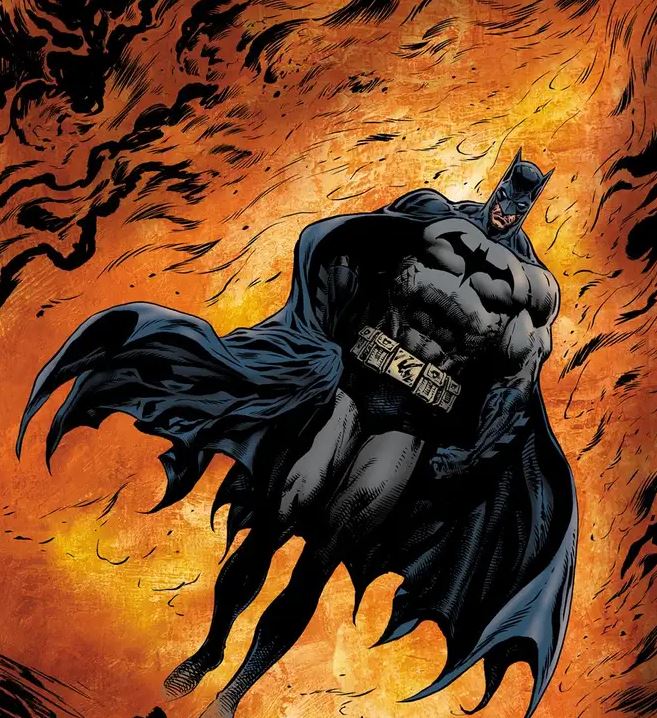 Overview: In Batman: Urban Legends #18, we see stories featuring the Signal and the Outsiders, Etrigan teaming with Batman, an Alfred tale, Tim Drake by Batman’s side, and a villain tale.

Story #1: Signal and the Outsiders in “Signal & The Outsiders” Part 1 by writer Brandon Thomas and artist Alberto Jimenez Albuquerque

Synopsis: The first story in Batman: Urban Legends #18 sees Signal recounting his week with the Outsiders.  He is battered but strong, and he is preparing himself for further action. He heads off to bed but not before a tearful stop in front of a network analysis with a picture of his mother at the center.

He awakens in a ship with the Outsiders as they head off for the third and final battle (for Earth?). They coach Signal a bit, and Signal recounts the intensity of his training. His Jokerized mother haunts his dreams.

Elsewhere, the Batmobile is speeding after Walrus and the Tomorrow Land Gang. The next panel shifts to Batman soaring in the sky as he hears over the comm that “Breyfogle Place [is] partially closed.” The Bat-Family closes in, and Black Lightning arrests the Rogues’ truck. GCPD arrives to apprehend Walrus. Black Lighting and Batman discuss their concerns about Signal. Black Lightning refers to “Bruce” and insists that Batman aid.

The Outsiders return to Signal’s bed, and he awakens with a reversal that leaves Black Lightning wincing and impressed. They all argue, and then Batman steps out of the shadows and tells Signal to listen to his team. Batman instructs Signal to show the Outsiders his forensic investigation of the disappearance of his mother. The conversation is heated, but they eventually agree: The mission is to locate Elaine Thomas, Signal’s mother, and Batman formally requests the (rotating) fifth chair.

Analysis: Brandon Thomas is an impressive writer. I generally do not read extensively in Greater Gotham, but Thomas’s stories about the Outsiders in Batman: Urban Legends are consistently good. As TBU fans continue to await formal affirmation from DC on an independent book for the Outsiders with Thomas on board, we can enjoy his contributions to the present book.

There are several nice moments in this story. The AI-driven Batmobile flashing directly to a dynamic action shot of Batman soaring is exciting enough, but integrating the homage to Norm Breyfogle in the same panel is a show of skill. The illumination of Batman’s eyes from the curtain in Signal’s room is classic, and the shadows are well-wrought by artist Jimenez Albuquerque; the homage to Batman: The Animated Series is extremely well-done. Apparently, editors Ben Abernethy and Dave Wielgosz are enthusiastic enough about Thomas to sanction a mission with Batman himself, and their confidence is rewarded in this opening shot. I really, really enjoyed this story.

Story #2: Batman and Etrigan the Demon in “Blood In & Blood Out” by writer Henry Barajas and artist Serge Acuña

Synopsis: The second story featured in Batman: Urban Legends #18 sees Bruce Wayne attending an event at the Gotham Natural History Museum to honor archaeologist Dr. Maria Puente. Bruce and some friends discuss the obligations of the museum to return looted artifacts. One of the artifacts, a Mexican statue named the “Huitzilopochtli” is rumored to be haunted. TV cameras start rolling, and all heck breaks loose. Etrigan The Demon has arrived, and fighting breaks out. Batman appears and instructs Etrigan that no one is to die. Mord and company apprehend Etrigan and take him to the Gotham City Reservoir.

The demon ‘Lord Scape-Goat, Son of Belial’ appears and begins battling Etrigan.  Batman ends up battling Lord Scape-Goat and warns him that he has been fighting demons his whole life. Etrigan eventually releases his possessed body, which was Dr. Puente herself. The statue is now damaged and covered in blood.

Analysis: I generally like occult and demonologic narratives in general, but do not feel they are often well-handled in the Batman Universe. The story is confusing, but I generally am not well-acquainted with Etrigan, so for followers, it might make more sense. I appreciate the nod to restorative justice in the (brief) discussion about the return of looted art.

Story #3: Alfred in “The Pennyworth Files” Part 1 by writer and artist Chris Burnham

Synopsis: The next story in Batman: Urban Legends #18 sees Alfred Pennyworth entering an antique shop. An armed robbery ensues, and in the aftermath, Alfred agrees to look for the owner’s missing jade earring. Elsewhere a minion approaches a darkened Rogue, and they quickly exchange news and instructions. The master resembles Black Manta.

As Alfred closes in on the thief, who may work with seafood at Quist’s Market, he suddenly realizes that he is surrounded by the thief’s allies. Knives drawn, they advance on Alfred. Cane dipped in a shallow pool of water, Alfred sends bolts of electricity into his would-be assailants.

Following the next clue, he radios Batman for assistance, but Batman is occupied. Alfred returns to the shop to bring the owner into his protection but finds only the robber gurgling with blood. A bomb is ticking down nearby. The shadowy servant-villain, who is revealed to be an aquatic being, walks away.

Analysis: DC Comics is making sure that, despite the absence of Alfred in continuity, we receive our due share of the generally-beloved character. Who does not like Alfred? That said, DC’s efforts to make him a central character in his own right are not always successful. The story moves along at a good clip here, however, and the classic detective genre obviously plays well with a Pennyworth who sits at the nexus of Victorian detective fiction and MI5 thrillers (an entertaining crossover, to be sure).

Synopsis: The fourth story in Batman: Urban Legends #18 sees Tim Drake having a nightmare. He is awakened by Bruce. The Bat-Signal is shining in the night. In the Batmobile, they speed towards Arkham Asylum, as Gotham residents all endure nightmares without respite. Bullock is on scene. He informs Batman and Robin that a few hours ago, some of the inmates started convulsing and thrashing in their sleep. The man they sent in has not reported back, and there is no sound from the Asylum.

The Dynamic Duo enters to find all occupants in sleep paralysis. With a shot of epinephrine, Batman awakens an orderly. She refers to “Dee” with horror, and Batman and Robin sprint off, aware that the culprit is the skeletal, almost lich-like Dr. Destiny (Dr. John Dee). He uses a device he calls a “materioptikon” to invade people’s dreams, and he sends a second blast. A mass of shambolic somnambulists heeds the call. The landscape shifts according to Dr. Destiny’s thoughts, and Batman has a vision of multiple Jokers beating a Robin to death. Batman roars, but Tim is already moving at high speed. He smashes the device and apprehends Dr. Destiny.

The Dynamic Duo speeds towards the Batcave, and Robin asks Batman if he wants to talk about Jason.

Analysis: Tim Drake is my favorite Robin, and it is always welcome to see a classic caper between the two. The dramatic differences in Batman’s specific relationships with each Robin is a rich source to mine for character development. I tend to like fear dream narratives in TBU, whether from a Scarecrow toxin, the Mad Hatter’s mind control devices, or here from Dr. Destiny. This feels like a one-shot story, and it works well enough as a capsule narrative.

Synopsis: The final story in Batman: Urban Legends #18 introduces Isabelle Gold serving at the Iceberg Lounge. Elsewhere “Kevin Navarro” delivers some takeout to Kite Man. Her inner monologue is a steady stream of ethical critique until “pharma-bro” Marvin Falcone, nephew of Carmine, emerges onto a stage. Gold and Navarro work for the crowd, and soon customers, including Falcone, are reporting a theft. Gold and Navarro go on a crime spree, targeting only Gotham’s most wealthy and corrupt class.

Batman apprehends them and warns them of the danger. Then Killer Moth appears. Batman takes him out, and in the scuffle, Gold and Navarro speed off into the night.

Analysis: There’s nothing really wrong with this small, simple story. The fact that Batman actually utters the dialogue “like a moth drawn to the flame” before Killer Moth appears is somewhat literal, but there’s not much here, nor is there intended to be.

It is not clear why the book benefits from five stories in a single issue. That said, some of the stories are independently strong, and I am hopeful that the format in #17 and the current book, which does not promise six-part stories, continues indefinitely. Nevertheless, it is unclear why some of the stronger stories in a generally underperforming book are not worth breaking out into separate titles (e.g., The Outsiders). In that case, Urban Legends could be transformed into a mini-series format that would be a superior format, in my opinion.