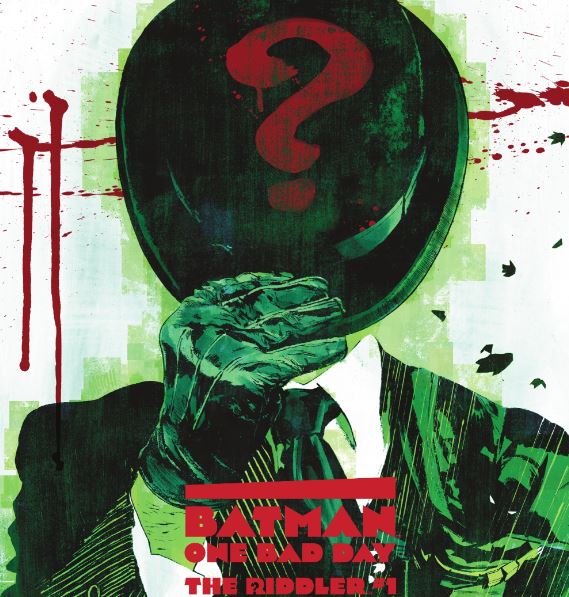 Overview: In Batman: One Bad Day-The Riddler #1, Batman uncovers a dark truth about the Riddler in trying to solve the criminal’s latest murder.

Synopsis (spoilers ahead): As Batman: One Bad Day-The Riddler #1 begins, a man by the name of John Oates shuts down his office computer after a long day. He rides the elevator down while talking on the phone with his wife. Their daughter is sick. As John leaves his office and hails a car, everything goes black.

Security footage shows John waiting for his car when the Riddler walks up right behind the victim. Riddler raises a gun and fires at point black range into the back of John’s head. He then holds a card with a Bat symbol up to the security camera.

In an interrogation rumor, Commissioner James Gordon tries to get the Riddler to talk. Riddler is upset that Batman isn’t coming, despite turning himself over to the police in anticipation of talking with Batman. Riddler is uncooperative and taunts Gordon about Barbara being crippled by the Joker and about Sarah Essen.

Gordon breaks and strangles Riddler for a moment, then pauses and leaves.

In the past, a young Riddler named Edward Tierney confronts his headmaster father. The senior Tierney is upset that young Edward was third in class and didn’t ace his test. Edward pleads with his father to no avail, and his father beats him. While beating Edward, Mr. Tierney accuses his son of being the “son of a whore.”

At the funeral of John Oates, Bruce Wayne stays behind and is introduced to Ms. Oates. She invites Bruce over to the gathering after the funeral, then breaks down. Bruce tells her to take all the time she needs.

At school, young Edward completes another test. At the end of it, there’s a riddle, which he answers. After the test, Edward shares his answer to the riddle with his teacher, who tells him he got it wrong. His teacher then goes on to tell him that anyone can memorize knowledge, but learning is about recontextualization of that knowledge.

At home, Edward punishes himself for answering the riddle wrong. He holds an empty gun to his head and pulls the trigger several times, then calls for his father to beat him.

In the present, Batman interrogates one of Riddler’s henchmen, the one who knows Riddler best. He dunks the man in shark-infested waters over and over again until the man tells Batman what he wants to know.

At Arkham Asylum, Edward Nygma gets the inmate in the next cell, Film Freak, to kill himself. Gordon confirms this information to Batman as he drives around Gotham. Gordon tells Batman that they can’t find any connection between Riddler and John Oates. Neither can they find any riddle or game. This isn’t Riddler’s normal M.O.

Batman drives to a shack just outside of the city.

Back at school, a young Edward asks his teacher, Professor Yellin, not to put another riddle on the next test. Edward believes it’s not fair, but his teacher refuses. Instead, he applauds Edward’s efforts, relating the student to Byron in his act of rebellion. Yellin tells Edward that he’s smart and that he really just needs to relax. Edward does not take this well.

At Arkham, Riddler severs the fingers of a guard who asked him for another riddle for the guard’s daughter.

At that shack out in the middle of nowhere, Batman confronts an elderly Dana Tierney, Edward’s father. The man fires upon Batman, who only advances and presses Tierney on why the Riddler would murder.

Headmaster Tierney tells Batman that his son is an idiot. He pressed his son and got the boy into the academy he was headmaster of. Edward was much younger than his peers and showed great potential, despite being the son of a woman “not suitable” for the academy. Tierney tells Batman that his son wasted all of his potential on games. The two have not spoken for thirty years, not since they last met at a basketball court.

As Batman: One Bad Day-The Riddler #1 continues in the past, Edward stages a fire, then tells his father. When his father reacts and starts to take care of the situation, Edward steals a way to the school records room. He searches through test records, reading the answers to Professor Yellin’s next test.

At Arkham, Gordon prepares Riddler for transport, and Riddler uses his knowledge about the guards’ to provoke them into shooting, which results in them shooting themselves.

Batman finds out Edward’s mother was murdered, that she was a prostitute who had been working the streets for years.

Gordon signals to Batman and then tells him where to meet Riddler.

In the past, Edward meets Professor Yellin on the basketball court. Yellin blindsides Edward with a question about where he wants to be when he’s done with school. Then he encourages Edward to play some games and have fun.

Professor Yellin then tells Edward that he has Edward’s test score. At the last second, Yellin changed the riddle on the test. Unfortunately, this led to the professor catching Edward cheating, and he’s going to have to report the boy to Headmaster Tierney.

Before Yellin can tell the headmaster, Edward snaps and beats the professor’s face against the pavement. The past shifts to the present, and Riddler finally meets with Batman.

Batman accuses Riddler of killing his mother. Riddler, in turn, tells Batman that he knows his identity. Then he goes on to detail things about Wayne Manor, about spying on Bruce Wayne when he was working on solving Riddler cases.

Riddler tells Batman that if he lays a single hand on the villain ever again, he will kill a random person in retaliation. The only way to stop him, going forward, would be for Batman to murder him. Riddler then confesses that he played their old crime games with a hand tied behind his back, intentionally leaving clues because he knew that Batman wasn’t smart enough to solve the crime.

Riddler then confesses to murdering his mother by strangling her before she could answer his questions because he didn’t need to answer the riddle to his own life. He tells Batman that they’re going to live their separate ways now and that that’s the way it’ll be.

Riddler’s reign of terror extends to the criminal underworld. Everyone buckles under the Riddler’s pressure, swearing allegiance or steering clear of him. Riddler listens in while Batman and Gordon talk on a rooftop, but what he doesn’t know is that this is a recording.

Batman appears behind Riddler, monologuing how the mistake they both made is that each one is fixed on being the same way forever, that they can’t change. Everything cuts to black.

Analysis: Batman: One Bad Day-The Riddler #1 is a very moody, beautiful, and grimy crime thriller. It has the tone, style, and art befitting the special one-shot story readers would hope for. There’s a wonderful contrast of colors between past and present. Past is in hues of red, and present carries a hue of green.

Artist Mitch Gerads really shows off his skills, evoking a book that feels like it came straight out of a street-level 1970s crime thriller. Gone are the gothic images of Gotham. Instead, we get a city that feels more every day, that feels large and overwhelming, forcing us to see a story play out only in a few tight spaces.

Basketball courts play an important role in this story. We see them in the past and present, as well as mentioned in Headmaster Tierney’s confession to Batman. The court is Gotham, and it’s the playground both Batman and Riddler have gone to-to-toe upon many times over the years.

But no more. Riddler’s done with games, and he’s going to extort and threaten everyone into bowing to his will, including Batman.

That’s where this book loses its luster. The story, written by Tom King, doesn’t feel magnanimous or revelatory enough to bear the name “One Bad Day.” We learn that Edward “Tierney” was beaten as a boy for not acing his exams. We learn that he was a mistake child, born from a prostitute. His father feels shame for this and beats his son into being smarter than the rest.

Enveloping this reveal around a story where Riddler decides to randomly murder someone with no connection or no clue, on one level, feels like it’s trying to play at some greater subtext. But it also comes across as underwhelming. As readers, we’re also supposed to believe that Riddler has been intentionally handicapping himself for years by giving Batman clues. That’s a tough pill to swallow, and it feels more like a way to undermine Riddler than the intended attempt at making the Riddler even more clever than people were originally led to believe.

The ending of Batman: One Bad Day-The Riddler #1 is also left open-ended in an attempt to come across as literary and poetic. It feels rushed, especially when we learn through exposition that Riddler went on to ensnare the entirety of Gotham in a stranglehold after threatening Batman. Then, he (assumedly) gets his comeuppance in fewer panels than said exposition was revealed.

Batman: One Bad Day: The Riddler #1 is a beautiful book, but it stumbles over its half-earned attempts at cleverness. This is not an origin story we will remember in years to come.