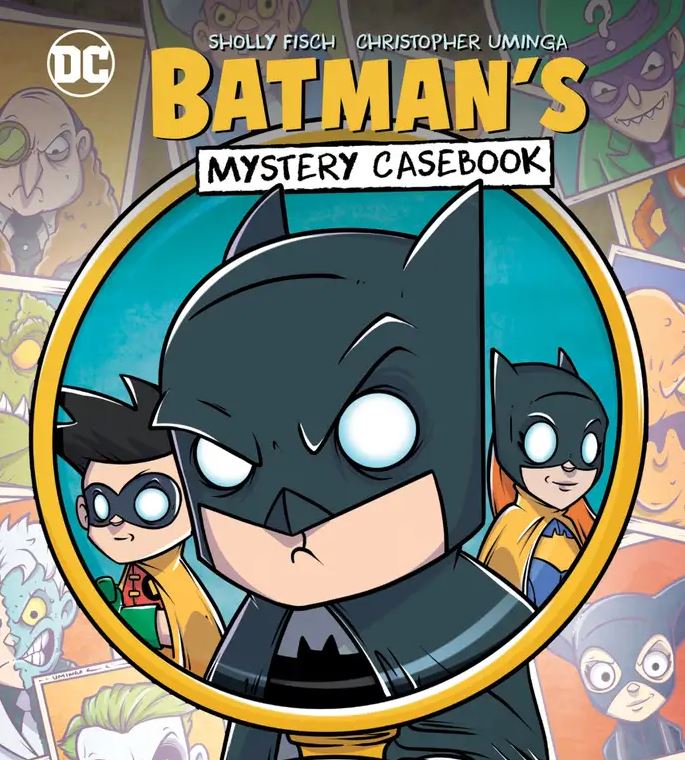 Overview: In Batman’s Mystery Casebook, Batman, Robin, and Batgirl take young readers on seven adventures that teach them the value of using your head to solve problems and paying attention to the facts when pursuing justice!

Editor’s Note: Because of the “solve the mystery” aspect of Batman’s Mystery Casebook, we will be leaving the solutions of the mysteries vague in the synopsis, so readers who get the book can play along!

Synopsis (spoilers ahead): Prologue: Whodunit? – Batman, Batgirl, and Robin invite you, the reader, to learn about being a detective and solve mysteries alongside them as they investigate an armored truck robbery. Finding many clues, they deduce the robber was probably Killer Croc and follow the trail into the sewers, where they find the furious villain!

Chapter 1: The Case of the Perilous Puzzles – Batman and Robin wake up after the Riddler gassed them, and the villain plays his usual game with them via TV screens. As they solve riddles and avoid traps, a bigger puzzle forms that they must solve to survive!

Having solved the puzzle, the Dynamic Duo turn the Riddler’s traps against him, finding his control room and taking the dastardly devil into custody.

Batcave Crime Lab: Crime Scene Investigation – Batman takes us through a brief history and definition of forensic science, then helps Alfred with his own forensic examination of the Joker’s hyena!

Chapter 2: The Case of the Dual Identity – Two-Face, in costume as a pirate, steals a chest full of doubloons. Batman and Robin save his hostages from the water as the villain escapes from the ship, then pursue him in the Batmobile, tracing him using traffic camera footage to an apartment building. Deducing which alias is Two-Face’s, our heroes burst into the correct apartment and capture the fiendish foe!

Batcave Crime Lab: Fingerprints – Batman, Robin, and Batgirl explain the science of fingerprinting to the reader and suggest activities to cement the concepts in kids’ minds!

Chapter 3: The Case of the Art Attack – Detective Harvey Bullock investigates a stolen statue at Gotham Museum, aided by Batgirl; as the curator, Ms. Shlockwell gives them her story – that Catwoman stole the ancient gold cat idol, throwing it out of the window to her henchman.

However, Batgirl deduces that Ms. Shlockwell stole it herself and blamed it on Catwoman for the insurance money. Catwoman pops in and steals a painting of cat-sup as payback for being falsely accused, and Batgirl jumps out the window after her as Harvey arrests the crooked curator.

Batcave Crime Lab: Tracks – Batman, Robin, and Batgirl, go over the basics of analyzing tracks as evidence (or clues) with some kids (as well as the readers)!

Chapter 4: The Case of the History Mystery – Just before heading out for patrol as Batman, Bruce Wayne is interrupted by Ted Lyle, trying to sell a medal he claims belonged to his great grandfather in World War I, telling a thrilling tale of aerial combat!

However, Bruce notices inconsistencies in the man’s story, and Alfred calls the police to arrest the swindling scoundrel!

Batcave Crime Lab: DNA – Batman and Batgirl go through the basics of DNA and how it is used as evidence by detectives!

Chapter 5: The Case of the Cold Cash – Batman battles Mr. Freeze in a bank vault, and though the fight is hard, Freeze traps himself with the water Batman releases from the sprinkler system. The assistant manager emerges, and Batman is faced with another puzzle.

Using his keen deductive mind, Batman realizes the assistant manager is Freeze’s accomplice and arrests both of the criminals!

Batcave Crime Lab: Fakes and Phonies – Batman, Robin, and Batgirl explore the world of forgery and counterfeiting for kids, taking down the Joker and Harley Quinn in the process!

Chapter 6: The Case of the Digital Ghost – Batgirl and Robin surprise a security guard at a science company, discovering a robbery and disturbing one of the scientists. They view the security footage and notice several clues!

Deducing the truth, the Boy Wonder and Dashing Dare-Doll arrest the scientist for his theft!

Batcave Crime Lab: Eyewitness Testimony – In court, Batman and Commissioner Gordon instruct the reader on eyewitness testimony, including a game where the reader looks at a double-page spread, then tests themselves on what they remember!

Chapter 7: The Case of the Perilous Parade – The Joker and Harley send a video threat to the Gotham Day Parade to the Mayor, and Commissioner Gordon calls in Batman. Observing the parade, Batman, Batgirl, Robin, and Alfred scour the crowd for the evil clown.

Using deduction, Batman locates Joker and Harley on their float, and the whole Bat-Family converges together to defeat the fiendish threat!

Epilogue – Batman exhorts the reader to use logic and reason to face the world’s problems, as there are mysteries everywhere!

Analysis: In this latest DC Kids graphic novel, thirty-year veteran DC and other children’s property writer Sholly Fisch once again shows his intelligence and humor in this gently paced book that borrows from the classic Encyclopedia Brown format to teach young readers to think logically and notice inconsistencies!

Artist Christopher Uminga gives our heroes a unique, appealing look, reminiscent of a less big-headed Funko Pop, and the storytelling and clues are laid out very well, aided by excellent colorist Silvana Brys and the lettering of Andeworld design.

Fisch, a developmental psychologist by training, spends each of the seven stories and interludes exhorting young readers to use their brains to solve puzzles and problems, not just technology. Always be curious about the world! Unsurprising but inspiring!  Batman’s Mystery Casebook is comprised of about one hundred and thirty pages of content – about six comic issues worth of content, making the division into seven chapters pretty appropriate!

Though Fisch’s craft is evident, the limitations of the format should definitely be considered if you are an older reader thinking of buying for the kind of fun layering that you see in Fisch’s Scooby-Doo or other tie-in comic work. The references tend to be a lot more limited due to the constraints. But for kids just getting into Batman and mystery fiction, Batman’s Mystery Casebook is a fantastic teaching tool and Batman introduction!

Editor’s Note: DC Comics provided TBU with a copy of this comic for review purposes. You can find this comic and help support TBU in the process by purchasing this edition digitally either for Comixology through Amazon or as a physical copy in a paperback form at Amazon or from Things from Another World.

A funny, warm, and intelligent book aimed to introduce kids to Batman and his family as well as the basics of detective work - accomplishing both objectives with style!