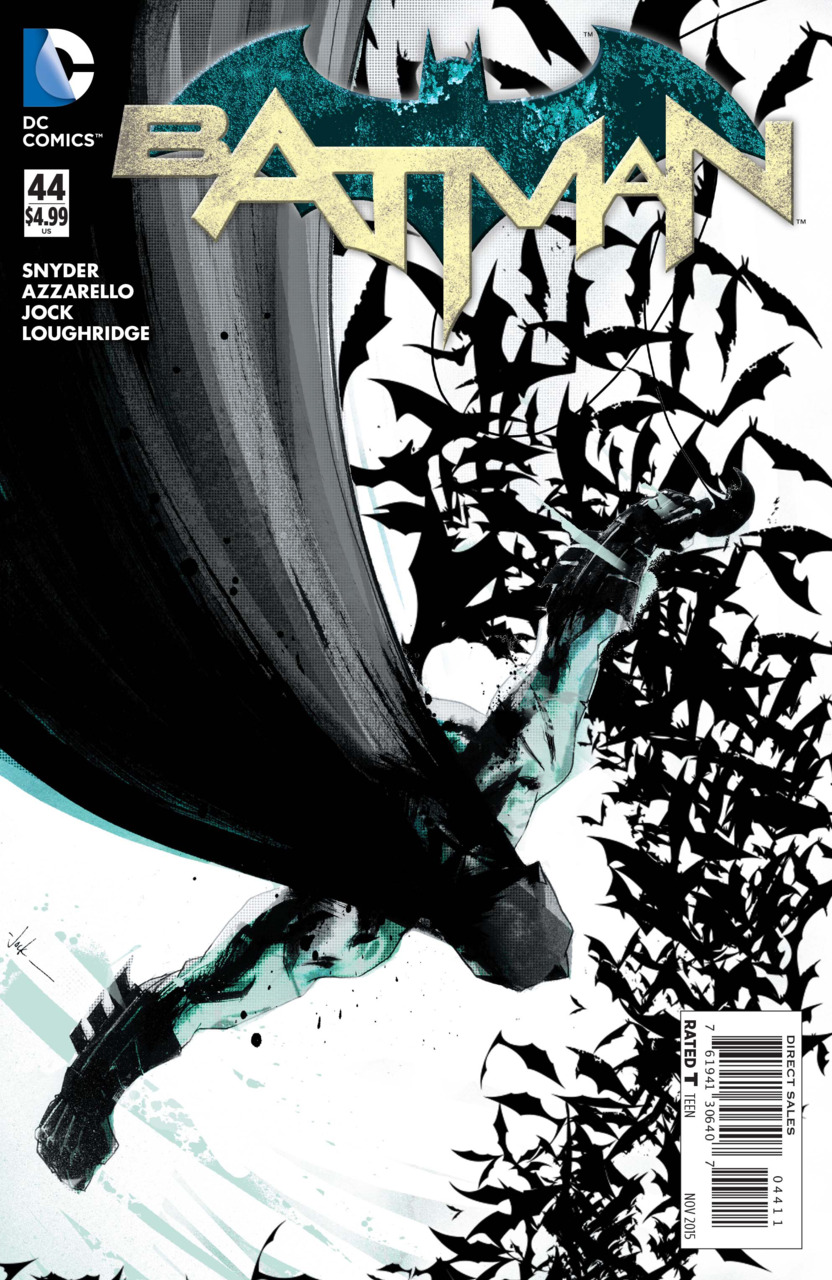 Honestly, there are times when writing a review can begin to feel like a chore. For instance, you can’t just enjoy the comic, and come on here and say, “Hey everyone! Go buy this book. It’s amazing!” because that’s not really a review. And yes, I will end up saying that, but I’m also going to tell you what I thought made it great and how I feel about it. This was different. I could not wait to write up this review. I loved every single bit of this comic. I feel like I will be reading this years from now, and enjoying it just as much as I am now.

It’s very rare that a comic moves you on an emotional level. But Brain Azzarello, Scott Snyder, and the art team of Jock and Lee Loughridge create something here that deals with something that relates to the world we are currently living in without really taking a side, which ended up being a beautiful thing. This issue harkened back to Snyder and Jock’s Detective Comics run, so if you were into that, this is an automatic buy. Very much a detective story through and through. It’s also an issue that stands alone. You don’t need any prior knowledge to what’s been going on since the relaunch to enjoy this comic, but it doesn’t negate any of that either. Even Lee Loughridge (I feel like) has a moment of storytelling on the final page, which added to the whole experience. The whole issue is told in the third person, from Gotham City’s perspective, which made an interesting play throughout – adding to the detective element and giving added meaning to Jock’s storytelling. This comic receives the highest recommendation I can give. The whole team did a phenomenal job, and they deserve to be rewarded. It kinda makes me wish this exact team would do this on a monthly basis. I love short form storytelling, and this is perfect as a single issue story and is something I’d give someone as an example.

Years ago; In an open field, just outside of Gotham, a young black man has seemingly died from multiple gunshots to the abdomen. Batman (Bruce) knows that this didn’t kill him though, it was the fall. One thousand feet above the marshy swamp where they now stand. A background check shows that the area where he’s from is controlled by a gang, the Four-Fives, who are in disagreements with Penguin.

Batman goes to pay Penguin a visit, and takes the henchman when Penguin tries to electrocute Batman and he counters by redirecting it into the ground, shocking them. Batman locks Penguin up in a bird cage, which dangles from a tall building, puts some bird feed on the rope suspending the cage, and waits to get the information he needs. Cobblepot explains that Peter (the boy) came to him offering to do business with the Bird. The Four-Fives claimed his older brother, who is dead, and his father is in the hospital, with no signs of improvement. He was desperate, and needed an out. But Cobblepot knows nothing of his death.

Batman goes to the deli that Peter ran. It’s burned down now, and a group of teenagers are standing outside of its ruins. Batman scares them away from the deli, and hopefully from the gangs. A man armed with a knife approaches Batman, but he is quickly taken out. The leader of the Four-Fives comes forward, and cooperates with Batman’s questioning. He doesn’t know how the kid died, but he knows he was trying to fight the Four-Fives off in his final moments and the place accidentally caught fire.

Alfred traces the bullets to a cop with a sketchy past. As Batman approaches, the cop is gun-happy. When asked, the cop admits to shooting Peter and thinking he killed him, but he couldn’t find the body when he returned. The boy’s father is still in the hospital, seemingly in a coma. Peter’s cousin talks to Batman, telling him he tried to talk Peter into going to Bruce Wayne for help, but couldn’t. So he went to a place left over from Zero Year. A place still wild, where amazing things can be grown. Peter took a serum from Mr. Bloom there.

Batman goes there, as we see him destroy the gardens. The serum worked. It gave Peter the power to stand up for his side of town. Protect it, like Batman. But his power lasted only so long. He was shot, grew batwings, and flew away. He lost these abilities in mid-flight. Who do you blame? The crooked cops? The gangs? Mr. Bloom? It’s all cause and effect. One bleeds into the other. Batman goes back to Peter’s corner of Gotham, and in a final black and white page, asks to have a talk to the boys he scared off earlier in the issue.