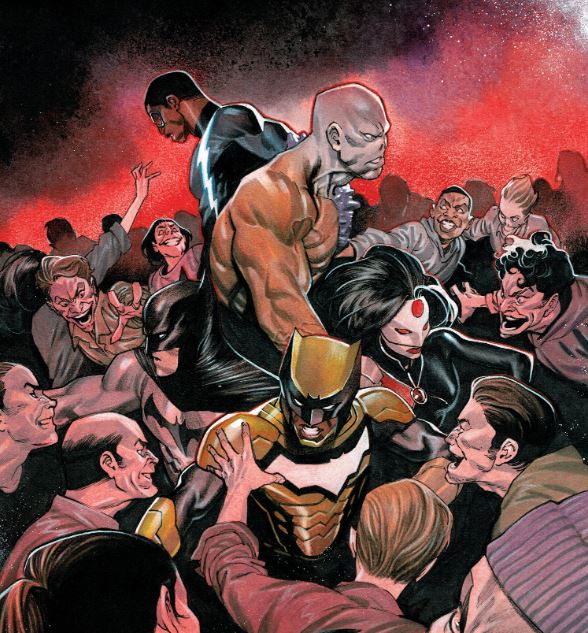 Overview: In Batman: Urban Legends #19, we see stories featuring the Signal and the Outsiders, Batman, Alfred, and more.

Story #1: Signal and the Outsider in “Signal & The Outsiders” Part 2 by writer Brandon Thomas and artist Alberto Jimenez Albuquerque

Synopsis: The first story in Batman: Urban Legends #19 sees Signal realize he was too close to the search for his mother and that he needs the Outsiders to step in. Katana notes that other people in Gotham have been Jokerized and have disappeared. Batman explains that Joker and Scarecrow victims have “cutting-edge” pharmaceuticals in their bodies that may make them attractive to all sorts of supercriminals. The team lays a trap, and Metamorpho successfully infiltrates Rose Creek Rehab Clinic, run by Dr. Alan March.

He is confronted by Dr. March, who explains the program began in an effort to help his son-in-law – Dr. Kirk Langstrom, aka Man-Bat. They talk further, and then Dr. March transforms into a man-bat himself. They fight, but March-Bat also pleads for help. The Outsiders head in, and Metamorpho finds himself surrounded by some of the disappeared denizens of Gotham. March-Bat orders their collars released, and the group becomes Jokerized again.

Signal rushes in, and his mother turns to attack him with a knife. Black Lightning slows them down with a surge of electricity. Batman and Katana go after March-Bat. Metamorpho hacks into the clinic computers, finds the drug they were using to zombify the Gothamites, and concocts an aerosolized version that will mellow the crowd without harming them. The vapor takes effect just in time.

Order is restored, and Signal makes sure Elaine is ok. He comms his thanks to Batman. The team, along with Duke, visits Elaine as she recovers in the hospital. Duke writes an explanation of himself and his secret identity as Signal on a tablet, and his mother begins to read it.

Analysis: I enjoyed almost everything about this story. Not only is it well-written, well-paced, and well-balanced between action and pathos, but it also comes to a natural close in two parts. Urban Legends seems to be moving away from the dreaded six-part format that dragged so much of the book down, and this two-part story shows the wisdom of such a decision. Brandon Thomas is a talented writer, and if we do not have an Outsiders title, then perhaps Urban Legends can be a suitable home for his talents.

Story #2: Batman in “Tiny Hands in the Dark” by writer Zac Thompson and artist Hayden Sherman

Synopsis: Batman investigates a murder. An eyewitness mentions “tiny hands in the dark,” which is not the first such murder. Batman is confused because clearly, the tiny hands have been all over the murder scene but have left no fingerprints. Refusing to believe a child is responsible, Batman zeroes in on a person of interest, only to find her rotting corpse in her apartment. He finds the childish figure named Bobby sitting on a bed in a dark room. The figure proclaims, “I want a dad, and I like hurting people.” Batman says he does, too.

Bobby attacks Batman with a blade, and as they fight, Batman realizes the figure is mixing his Bs with his Gs. He realizes that Bobby is a doll and that Ventriloquist is the culprit. He apprehends him and drags Ventriloquist out, but as he does, a voice pleads from the darkness.

Analysis: There is not much to this classic detective caper, although it is suitably creepy. Scarface is frightening in his own way, but Bobby feels darker and his motives far less clear; he professes to enjoy stabbing people and feeling their guts. The story does not appear to end here, so it will be interesting to see where this can go now that Ventriloquist has been apprehended.

Story #3: Two-Face in “Call It” by writer Joey Esposito and artist Mikel Janin

Synopsis: The third story in Batman: Urban Legends #19 sees Batman reminiscing about a dangerous encounter with Two-Face in which Robin was threatened. He refuses Two-Face’s demand to call the coin in the air and saves Robin while trussing up Two-Face.

Analysis: This two-page story is too short of accomplishing much narratively, though it is nice to see Janin’s excellent linework in Urban Legends.

Story #4: Alfred in “The Pennyworth Files” Part 2 by writer and artist Chris Burnham

Synopsis: Alfred disarms a bomb and saves a man’s life by cauterizing a throat wound. The scene flashes to the vaguely catfish-y being who likely committed the offense. Later, Alfred visits a museum where a member of an offshoot from the whalers guild known as the “Black Harpoon.” She tells him a story of a treasure worth dying for, found in the arms of a squid discovered in the belly of a whale. Alfred tries to piece the clues together.

Analysis: Alfred is wonderful, but I personally do not think the character is capable of carrying a story. There appears to be at least one more chapter to this, which is likely one chapter too many.

Story #5: Batman in “Leather Bound” by writer Brandon Easton and artist Will Robson

Synopsis: The final story in Batman: Urban Legends #19 sees Batman and Commissioner Gordon conferred outside the private zoo of James Schroeder. At a crime scene, the pair gaze at the corpse of a komodo dragon. They next find the corpse of a crocodile, and Batman muses that Killer Croc would not be pleased with the carnage.

Batman heads into the sewers, finds Croc, and confirms that he is not responsible for the slaughter and wants to find the person who is. Batman asks for a twelve-hour period to find the culprit. At the Batcave, Batman learns that Killer Croc has gone back on his word and is holding people hostage at the Gotham Zoo. He breaks in, puts down Croc with gas, and finds the herpetologist on duty, Dr. Meyers. She has some kind of skin rash.

Batman dons his Bruce Wayne costume to investigate the endangered animals’ trade. Back at the Batcave, Alfred informs him of the presence of calcium hydroxide on his suit. This is hydrated lime often used in municipal wastewater treatment.

Down near the docks, a figure shoots a guard. She is some kind of reptilian form who wants to reclaim dominion for reptiles. The creature hopes to attract Killer Croc. Batman appears, and they fight; Batman removes the creature’s mask and realizes it is Dr. Meyers’s assistant, Lars. Killer Croc appears, bent on revenge, and Batman intercedes. He attempts to help Lars, who is in the Gotham River, but some of Killer Croc’s reptile friends have other ideas. Lars ends up in the hospital with only one intact limb.

Analysis: This story is too simple and feels a bit like an episode of Scooby-Doo. Lars might have gotten away with it if it wasn’t for that meddling Batman. Then again, Killer Croc might have ensured that no one would have heard from Lars again.

The Outsiders story alone lifts the book, but none of the rest of the stories sing. That said, the Ventriloquist tale is well-illustrated and creepy as the calendar turns closer to Halloween.