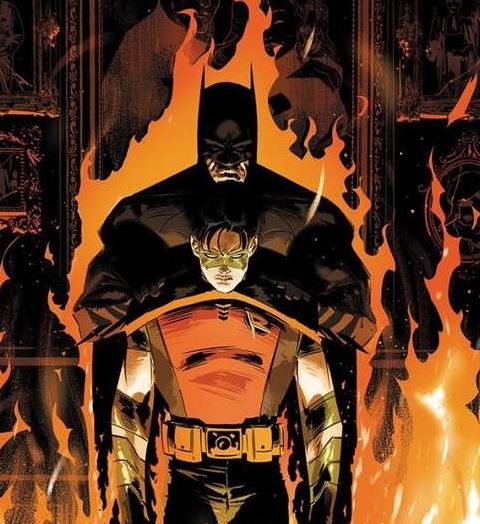 Overview: In Batman #128, Superman and the Justice League show up to save Batman from Failsafe.

Synopsis: Batman #128 begins with Batman immobilized at the foot of the grand staircase in Wayne Manor; he’s helpless as he watches Superman confront Failsafe. Failsafe brandishes Kryptonite, and Superman flees, luring Failsafe outside, where Superman can hit the machine from afar.

Fear floods Batman as he realizes that Failsafe will have accounted for this, too. Failsafe gets Superman in close again, then impales the Man of Steel with Kryptonite. Suddenly, Green Arrow joins the fray, lighting up the robot with arrows. Martian Manhunter, Black Canary, and Hawkgirl follow suit.

Inside Wayne Manor, Superman lies next to Batman while the rest of the League battles Failsafe. When Superman asks Batman what Failsafe is, Batman admits to himself that it’s a machine born out of the paranoia of youth. Out loud, he tells Clark that it’s a machine designed to take out Batman.

Batman pulls himself over to Superman and removes the Kryptonite. He patches Superman up to stop the bleeding. Robin (Tim Drake) arrives, along with Green Arrow. Together, the two carry Batman and Superman over to the Justice League jet. After dropping them off, Green Arrow rejoins the fight against Failsafe.

Robin, with the help of the jet’s computer, flies Batman and Superman to safety. Meanwhile, the Justice League battles Failsafe, only to lose the machine. It’s headed toward Gotham City.

In Gotham, Failsafe lures the Justice League to a block of buildings that Bruce Wayne owns, clearly setting them up for a trap. Nightwing joins the fight, with Oracle communicating with him.

Aboard the Justice League jet, Batman pulls himself together and sets the jet’s coordinates to the Fortress of Solitude. He tells Robin to save Superman, then leaps out of the jet and into the ocean. There, he uses a device to lure Aquaman.

Batman reawakens in a healing tank in Atlantis. Aquaman tells Batman that he has been mostly healed. When Batman asks how long he’s been out, he’s shocked to find out that two weeks have passed. Failsafe has taken over Gotham and installed an army of machines as its protectors, as well as rounded up most of the heroes. Every night, Failsafe waits for Batman’s return, lighting up Gotham with a gigantic Bat-signal.

Analysis: Batman #128 is an incredibly balanced and well-paced issue that combines an intense amount of action and striking moments of heart and empathy. Throughout most of the issue, Batman, immobilized, has to watch as the Justice League battles Failsafe, a machine he created to take down himself.

Artist Jorge Jimenez and colorist Tomeu Morey provide some absolutely stunning visuals. The paneling in Batman #128 is some of Jimenez’s best. It’s fast, zippy, and rife with tension, but also provides enough space for moments to breathe. Jimenez has a deft hand on the big moments, intersplicing giant displays with panels that keep the momentum and pacing moving at lightspeed.

Morey’s colors, in turn, are absolutely gorgeous. For such an explosive issue, the coloring hits every spectrum of the rainbow, treating readers to a dazzling and wild ride. Green Arrow moments, in particular, stand out as some of the highlights of this issue.

At the helm, writer Chip Zdarsky provides some absolutely beautiful interactions between Batman and Superman, as well as Batman and Robin. While throwing all of the action at the wall, Zdarsky keeps a firm hand on the heart of this story. It’s one wherein Batman screwed up. That comes across in Batman’s self-reflection as he watches the Justice League give it their all against Failsafe. It’s in these moments that Batman worries for his friends’ lives and realizes his own paranoia and hubris.

Clayton Cowles’ lettering adds a firm emphasis on these beats, giving each moment of self-reflection the proper weight it deserves, allowing readers to meditate on what Batman is internally processing.

Simply put, Batman #128 is a beautiful feat. Just when you think it’s leading to a safe and comforting conclusion, the creative team throws another wrench into the plotting with a time jump that upsets the chessboard. We no longer know where the Justice League stands, the Bat-Family, or where anyone else stands. Holy $#*%!

Story #2: “I Am a Gun Part One” by writer Chip Zdarsky and artist Leonardo Romero

Synopsis: Years ago, Batman has visions of the Batman of Zur-En-Arrh while under the spell of Professor Achilles Milo. He’s been poisoned, and he’s so afraid. Alfred Pennyworth and Robin (Dick Grayson) revive him.

Down in the Batcave, Batman isolates himself for a month, undergoing therapies to ensure no one can ever hijack his mind again. He’s building his Batman of Zur-En-Arrh persona. The red phone rings, and it’s James Gordon calling for Batman. Gordon wants Batman to come alone.

When Batman arrives, Gordon shows Batman photos of the Joker’s latest victims. They’re all security guards, except their eyes aren’t smiling after being infected with Joker toxin. Batman deduces that it’s a fake smile, wondering if, like him, Joker is broken too.

Analysis: This backup better serves to clue in newer readers on who the Batman of Zur-En-Arrh is while introducing a new, grim Joker story to the mix. After a brief recap, readers are thrown into a new mystery that appears to be a gruesome foray into the darkness.

Artist Leonardo Romero and colorist Jordie Bellaire do a great job of interweaving a classic, Dick Sprang-era style at the top of the backup story, which gives way to a more modern vibe when the Joker narrative is introduced.

Batman #128 is an incredible, thrilling issue firing on all cylinders, perfectly balancing an intense momentum with deep moments of heart.